A fourth-year dentistry student at Dalhousie University has detailed other sexist acts at the school, the CBC reports:

The 25-year-old woman says her photo appears in screenshots taken of the so-called Class of DDS 2015 Gentlemen Facebook page. The screenshots were provided to CBC News before the page was taken down last week.

The woman also said she and another female classmate complained to the dean of the faculty of dentistry earlier this year, after a male professor showed a video of bikini-clad women at the start of an 8 a.m. class.

A still from the video shown to a Dalhousie Dental class.

“I remember feeling that is so inappropriate and so not necessary to be here and be subjected to this,” the woman told CBC News.

“Many of the other women in the class felt the same way and many of us sent emails to the dean’s office reporting that we were not OK with this sort of behaviour from faculty.”

Shortly after complaining to the dean, the woman said every member of the class received an emailed apology from the professor.

The CBC has reported that no more than 38 students are accepted each year into the Dentistry program, so the 13 men in the Facebook group may be a majority of the men in the program.

The women who have come forward have done so under the university’s Sexual Harassment Policy, which provides two options to proceed: an informal resolution procedure and a formal complaint procedure.

A number of the women in this case have elected to proceed with a restorative justice process under the policy’s informal resolution procedure, and this process is already underway. The restorative justice process is collaborative and inclusive of the parties involved, with a view to developing outcomes that ensure accountability. The process is confidential so that a safe space can be created for the parties to explore the impacts, to address accountability and to forge constructive, meaningful outcomes. Those outcomes may become public if it is the wishes of those involved. The university will be a dedicated partner in this process, which is predicated on the good-faith participation and meaningful engagement of all parties.

If, at any time, the participants do not meet this standard, or do not demonstrate an appropriate commitment, the formal complaint procedure will be engaged.

The restorative justice model certainly has its place in the criminal system, but it may be problematic in this instance because the women involved have to continue working and studying alongside the accused men. There may be tremendous social and peer group pressure, and future career considerations, that dissuade the women from electing to make formal complaints, even if they think a firmer response is warranted.

That, in any event, seems to have been the response to a large number of people on Twitter. In response to Florizone’s statement, last night the hashtag #DalhousieHatesWomen was trending across Canada. Some representative tweets: 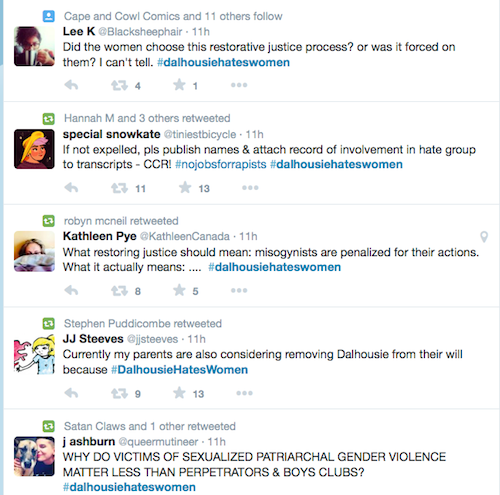 Also, over 5,000 people have signed an online petition calling for the expulsion of the men involved in the Facebook page. 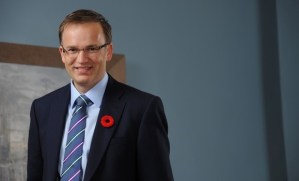 Florizone, who said he met with the women involved on Wednesday, broke down in tears while recounting their conversation.

“I am guided by the women and the choices they have made,” he said.

The president said he was struck by the concerns expressed to him over the past 48 hours.

“I’ve received views that we should take harsh action immediately,” he said. “But I’ve also heard from voices, from professionals who say be cautious because this kind of high pressure environment, for both the men and the women, presents suicide risk and harm.”

About an hour after I publish this Morning File, I’ll publish a second article detailing last night’s court hearing for Halifax councillor Linda Mosher’s alleged traffic violation. It may need a bit of tweaking yet, but here’s the beginning of the article, so far: 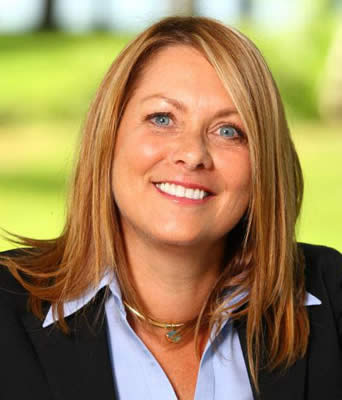 Councillor Linda Mosher was charged with the wrong offence, says her lawyer, Gavin Giles. Mosher is charged with improperly changing lanes on May 7, 2013, in an incident that led to the injury of a bicyclist. But at best, argued Giles at a hearing last night, Mosher could have been charged with an improper turn—but he would contest that as well. Giles asked Justice of the Peace Kelly Shannon to make a directed motion that the improper lane charge doesn’t apply, effectively ending the matter. Shannon said he’d consider it, and continued the hearing until March 25.

This entire matter has turned into something of a farce. Mosher faces a fine of $222.41. Even if they think they are innocent, most people simply pay the fine and are done with it—the time and hassle of fighting a ticket just aren’t worth it. But Mosher has gone to extraordinary lengths to fight her ticket. She’s hired the high-profile Giles to represent her, no doubt at many thousands of dollars. The cost to the justice system must be enormous—last night, the courthouse stayed open an hour past its normal 9pm closing time, so the bailiff, court reporter and other courthouse staff were making overtime. There are additionally the crown prosecution’s cost, and myself and another reporter were present. Councillor Steve Adams showed up as well because he and Mosher are good friends and that’s what friends do when a friend is facing injustice, ya know?

Mosher certainly has every right to fight a ticket, so no taking that away from her. But had she just paid the fine and mouthed some words of contrition, that probably would’ve been the end of it—we all make mistakes, accidents happen, yada yada. Heck, Reg Rankin drunkenly drove into his own house, and everyone’s forgiven him for that. But by fighting this ticket, Mosher has managed to make all the ugly details of this incident reportable. And Oh.My.God. 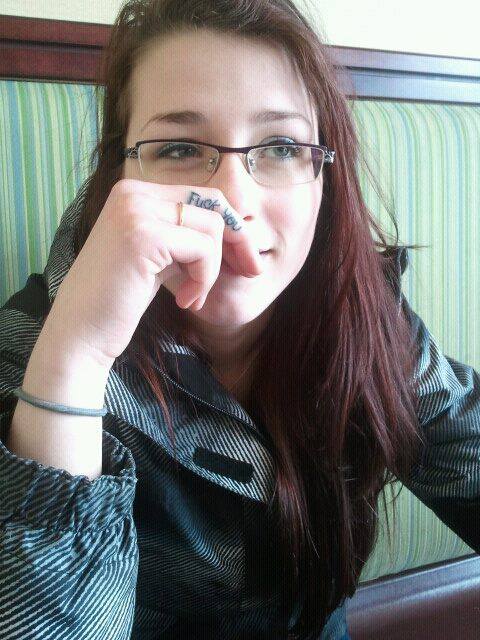 Rehtaeh Parsons’ mother, Leah Parsons, posted this photo on Facebook last month: “Three years ago today Rehtaeh woke up in a strange home with 4 males….today she wakes up our voices on this day of sentencing. To the courts/laws who impose a publication ban on her name. This one is for you! Rehtaeh Parsons is her name!”

Yesterday, Justice Minister Lena Metlege Diab issued a ministerial directive saying that people will not be prosecuted for using Rehtaeh Parsons’ name in relation to a child pornography case:

The directive, issued to the Public Prosecution Service, says no breach of the ban identifying Rehtaeh Parsons as the victim in the recent high-profile child pornography case, by media, or in any forum, will be prosecuted, unless her name is used in a derogatory way.

The Halifax Regional Police Department then issued its own statement:

Current investigations and future complaints involving possible breaches of the publication ban will be reviewed in the context of the Ministerial Directive and closed unless investigators, in consultation with the Public Prosecution Service, ascertain the victim’s name has been used in a derogatory way. 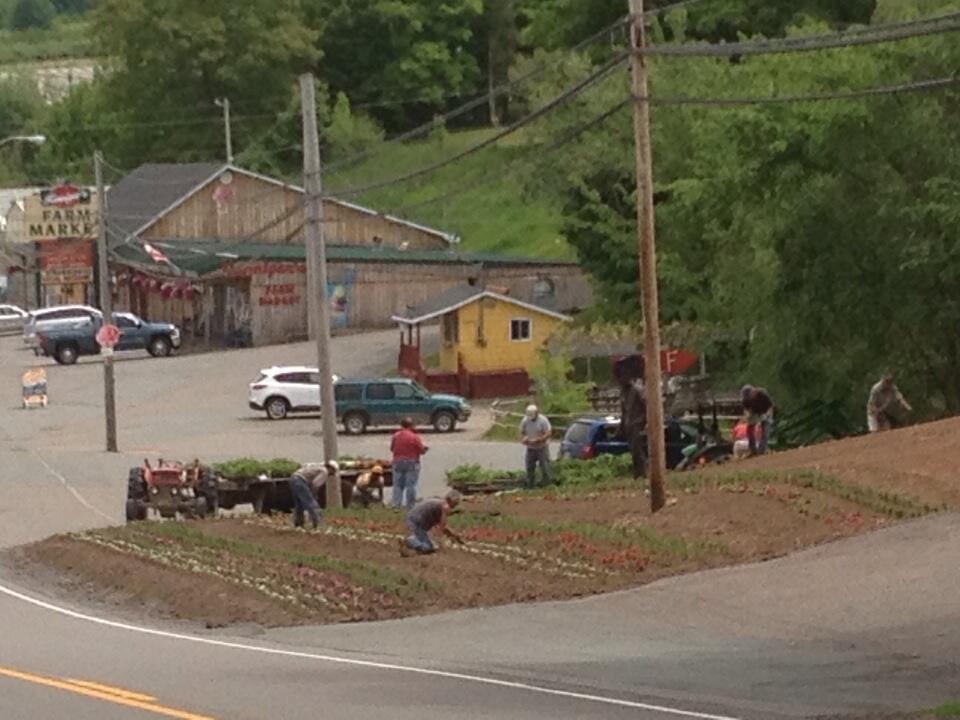 Doug Hennigar has lost his battle to continue operating a U-pick garden on a public highway. Reports Wendy Elliot:

[Transportation] Department staff arrived, dug the edge of the bed that caused controversy back in June and paved the area.

In a telephone interview, Doug Hennigar said he is contemplating planting dandelions on the flowerbed next spring.

“I’m going to take a different approach,” he said. “I feel bullied when 15 men and eight vehicles show up. I’m tired of it.”

There go my plans to open a corn maze on Barrington Street.

Eddie Carvery is recovering from heart surgery and is in good spirits.

“We got a report of an elf acting suspiciously in Bayers Lake,” police spokesperson Pierre Bourdages told the Chronicle Herald:

The 40 year-old man behind the merry elf had packed three costumes into his car — an elf, snowman and Santa Claus—and drove to Bayers Lake to entertain shoppers.

“Someone was concerned about the individual being there,” Bourdages said.

“It was a grown-up man dressed as an elf looking into businesses’ windows.

“But he was there to entertain people. There was nothing criminal or suspicious.” 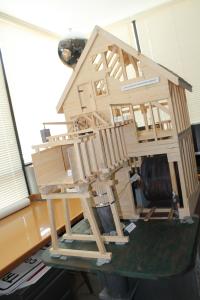 Model of the power house to be constructed at the Shubenacadie Canal. Photo via Kate Watson.

Construction has begun on the Shubenacadie Canal Greenway in downtown Dartmouth. “On the site there will be several constructed features including re-creations of the inclined plane/marine railway, the power house and the turbine chamber,” says Kate Watson.

The Truro Daily News is against the murder of elderly people.

3. Cranky editorial cartoon of the day

From the Eastern Shore Cooperator: 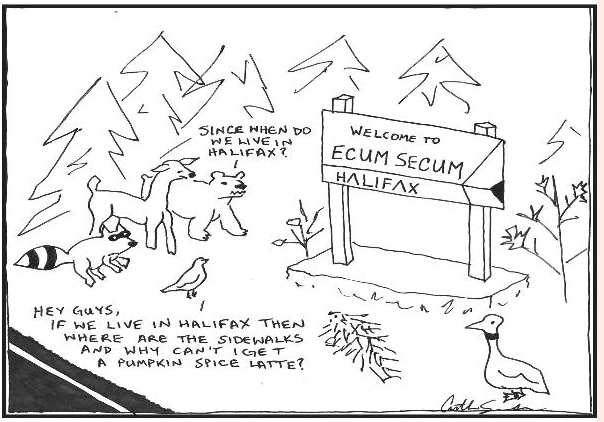 Standing Committee on Resources (9am, Room 233A, Johnston Building)—Joe Goetz, President of the Nova Scotia Beekeepers Association, will talk about how bad ass it is to be covered with 15,000 bees.

Here’s some film footage of Halifax from the 1930s, 40s and 50s. See a bazillion kids everywhere, a busker playing the squeezebox, and the world’s most dexterous traffic cop. 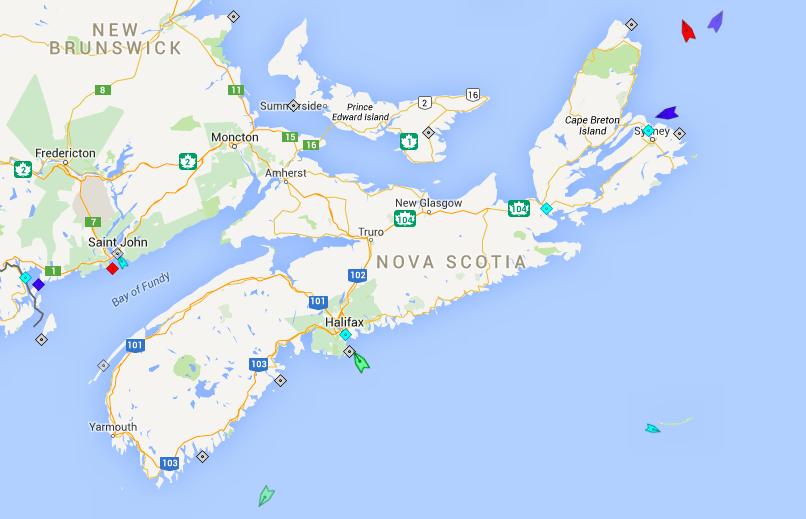 The seas around Nova Scotia, 6am Thursday. Map: marinetraffic.com

Reader Daniel MacDonald sends this video of the Australian Spirit being escorted out of the harbour last night. Peter Ziobrowski has more.