You are here: Home / Featured / Saving the stories after the buildings are gone

In a Twitter thread, Bousquet shared this electoral map produced by the CBC after the last election and suggests comparing that to the spending announcement map he and Henderson put together. 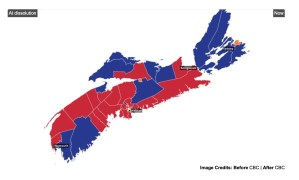 2. Child protection: Catch-22 all over again. Again and again… Part 1 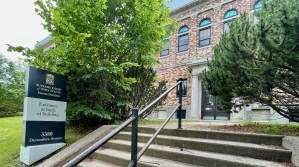 Stephen Kimber has part 1 of a two-part report on changes to Nova Scotia’s child protection act and details how those changes played through the case of J.C. and her fight to keep her seven-month-old son.

The changes to the act were announced in 2015, but as Kimber writes, a report from veteran social workers Jacqueline Barkley and Robert Wright found “we are seeing things getting worse for families, not better.” Kimber writes:

In fact, the case of the “Minister of Community Services v J.C.” represents an almost perfect-storm example of what Barkley and Wright described as one of “the erroneous ideas that are leading to our ineffective or misdirected interventions … the fetishization of risk.”

On the day J.C. showed up in court for what is known in the child protection trade as a “five-day” — a hearing five business days after a child is taken — J.C. was 21, and she already knew better than most how the system worked.

This is an important read and we’ll have Part 2 for you soon.

3. Use of force expert testifies at hearing into Corey Rogers’ death in Halifax police custody 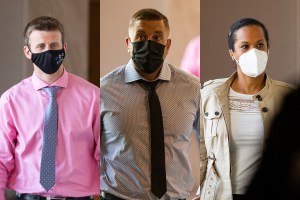 Zane Woodford was back at the Nova Scotia Police Review Board hearing on Monday. Sgt. Kelly Keith, an expert in police use of force, testified that while constables Ryan Morris, Justin Murphy and Donna Lee Paris used actions during the arrest of Corey Rogers that were in line with Halifax police policy, their training didn’t include training on spit hoods. Woodford writes:

Keith said he’s never trained officers on their use, but he doesn’t consider spit hoods to necessarily be a use of force.

This has been a point of some debate throughout the hearing because the hoods are listed in the cells policy as a use of force that must be documented by booking officers. Before Rogers’ death, no HRP officer had been trained how to use them, and the officers at this hearing said they still haven’t been trained on them. Policy implemented after Rogers death, in 2019, restricted use of spit hoods to the cells. As the Halifax Examiner reported last year, they are still being used.

But back in 2016, any officer could use the hoods at any time without any training.

“There’s policies in regards to starting your notebook with the date, but there’s no policy regarding spit hoods,” Keith said of that time.

“There’s no training in regards to spit hoods.” 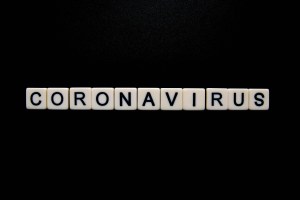 There were only four new cases of COVID-19 announced in the province on Monday. Tim Bousquet has the full update, which includes demographics, details on testing locations, vaccination data, and more.

Of the four new cases, one is in Nova Scotia Health’s Central Zone and it’s under investigation.

The three other new cases are in the Eastern Zone. Two of those cases are under investigation and one is a close contact of a previously announced case.

There are 57 active cases of the virus in Nova Scotia. While it’s not COVID zero, it’s good to see lower numbers.

I’m enjoying seeing people rebooking their second-dose appointments and sharing their selfies after getting the vaccine.

Premier Iain Rankin and Dr. Robert Strang will have a COVID briefing at 3pm today. You can watch that here.

Saving the stories after the buildings are gone 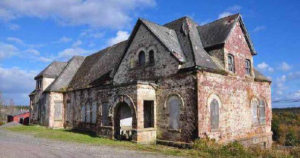 The Commercial Cable Building in Hazel Hill was torn down in September 2017. But the stories about it, and about the cable industry in Canso, still survive. Photo: Suzanne Rent

In July 2016, I was staying for a weekend in Guysborough and drove to Canso for my first visit there. On the way, I noticed this building, pictured above, just standing along Highway 16, so I stopped. There was no signage and no one around to ask about it. So, I took a picture and shared it on Twitter where I learned it was the former home of the Commercial Cable Company. People had all sorts of stories about this place, which was where messages about news like the sinking of the Titanic or the end of the Second World War were received.

A few months ago, and again yesterday, I spoke with Bill MacMillan, who lives in Canso and is the current president of the Canso Historical Society. While the building is gone — only the foundation remains, surrounded by a chain link fence — the stories about the building and the Commercial Cable Company remain.

There were also other cable companies in this area, including a Western Union office right in Canso that was established in 1881 and closed in 1955, although the company left for a brief period in 1913, running most of its business from North Sydney. The other cable company was the Direct United States Cable in Tor Bay, about a 40-minute drive from Canso. That company opened in 1874 and eventually moved to Halifax.

Commercial Cable opened the Hazel Hill office in 1884. MacMillan says it was an upstart and the money to fund it likely came from the California gold rush. “There was great competition for sending the information from Europe to North America for the benefit of the newspapers,” MacMillan says.

The Canso peninsula offered a geographic benefit for these companies. The first trans-Atlantic cable went from Ireland to Heart’s Content, NL. MacMillan says that company had a 50-year charter for landing any cables in Newfoundland. But as the technology improved and messages could be transmitted over longer cables, competitors started looking for the next best location. That turned out to be the Canso peninsula. MacMillan says the area and cable companies were so important, troops were stationed outside the cable offices during both world wars.

Most of the operators who worked with Commercial Cable were British and moved to Hazel Hill where the company built a neighbourhood, complete with a private club, boathouse, and tennis courts, for them and their families.

You can visit this older website here, which has a lot of the history of Commercial Cable and the cable industry in Canso.

The building was torn down in September 2017, but not without a fight from a community group looking to save it. MacMillan says plans to save it included having a tenant in the building that would sustain it. He says the group approached Oceans and Fisheries (DFO) to use the building for its offices or for Canso to relocate its library there.

I thought about the building and its history after reading Joan Baxter’s stories about the spaceport in Canso. One has nothing to do with the other, I’m sure, but imagine what a group could have done with this place had they had the money. Says MacMillan:

It was almost inevitable that it had to come down.  It wasn’t teetering but it didn’t take much to push it down. It was a sad day. It was a wonderful piece of architecture and a lot of effort went into it at least two or three times. In the end, we failed up to this point, but it’s nice to think that someday, with the right project coming to Canso, there could be another opportunity to take a look at it. 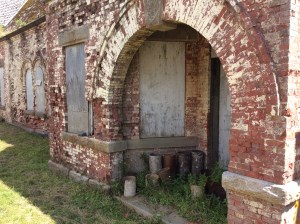 Above and below: Photos from the former Commercial Cable Company building not long before it was torn down in September 2017. Photos: Bill MacMillan 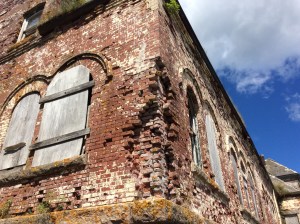 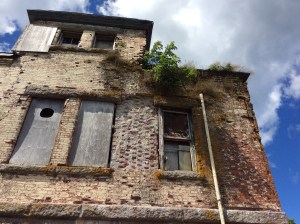 There is a display about the area’s cable company history at the Whitman House museum. MacMillan says there’s also a cable heritage trail between Sherbrooke Village and Canso, which included interpretative panels and kiosks at Tor Bay, at Fox Island Main, and Little Dover, where the cables were located, and Hazel Hill where the station was.

MacMillan says there are all kinds of other stories connected to these places, including one company’s experiment in sending homing pigeons to Sable Island to send messages there. Or when the Hindenburg flew over locations in Nova Scotia in July 1936, including Hazel Hill.

MacMillan says the municipality of Guysborough is looking at putting interpretative panels at the site of Commercial Cable where the foundation and a small park is now. MacMillan says it could be a “living ruins.” He says in Canso they’d like to see more signage at the old Western Union office.

For me and many of us, that there were three cable companies operating out of such area in coastal Nova Scotia … that’s noteworthy enough. The history is ours. We need to keep the stories alive. 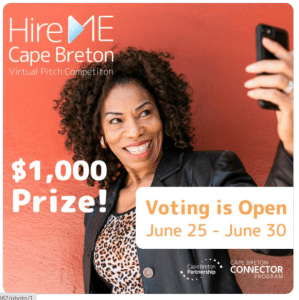 About the ad, Campbell tweets, “How to get a job in Cape Breton: enter a pitch contest, win, make a radio ad, hope someone hires you.”

Voting is now open and the entries are on the Cape Breton Partnership Facebook page. Many of the candidates are international students, who’ve made Cape Breton their home. I know job hunting is tough and a competition, but this feels icky in many ways.

Halifax Regional Council (Tuesday, 10am) — live streamed on YouTube, with captioning on a text-only site

Funny story: I was in Annapolis Royal on Sunday and having an ice cream cone at the amphitheatre just off Main Street. At one point, the ice cream started dripping onto my white pants, so I got up and headed for my car.

Later in the day, a friend messaged to say her husband’s cousin and her husband (got that?) were also in Annapolis Royal. They posted photos of their day on Facebook, including a selfie taken at the amphitheatre. And who’s in the background? Me, getting up from my seat, dripping ice cream in hand, heading to my car. My friend immediately recognized me in the background and said, “What are the odds? That’s Nova Scotia!”