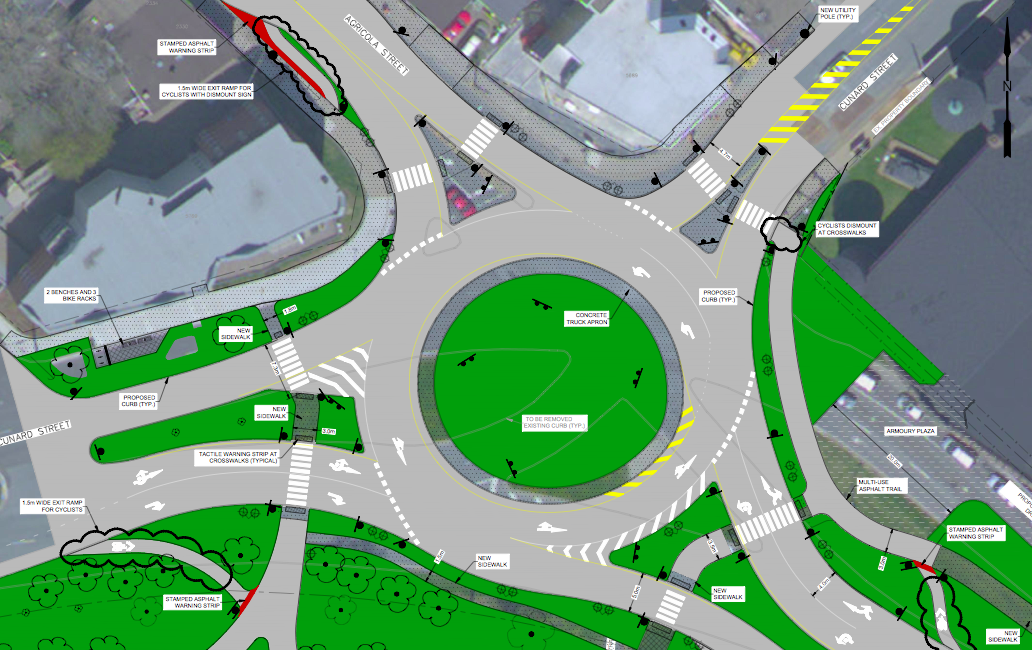 Construction started yesterday on the rebuild of the North Park/Cunard/Agricola Street intersection, and as expected, there’s lots of criticism—there’s not enough consideration for bicyclists and too many trees are being removed, say critics. Perhaps. But as they exist, this intersection and the North Park/Cogswell/Rainnie/Trollope/Ahern intersection, which will be rebuilt next year, are death traps. I used to work nearby and walked through the intersections daily. I’ve been nearly hit dozens of times. People I know have been hit as pedestrians, on their bikes, and in their cars. It’s hard to see how the rebuild could make the intersections any worse from a safety perspective.

The court has put a video of the entire hearing on line.

Federal policy has changed such that parking at military bases is now regarded a taxable benefit, and so the military will soon begin charging for use of parking spaces in the urban core, reports the Chronicle Herald. Monthly passes will cost from $25 to $110, depending on location, which presents a real hardship, especially for lowly paid workers and volunteers at the Family Resource Centre. Barb Corbett, a board member at the Centre, put the charge in perspective for child care workers: ““I think $480 a year is still going to be a lot of money; that’s a tank of oil.” There’s no denying that free parking is a subsidy that holds real value, but this seems like an unthinking bureaucratic response to that realization. Undoubtedly, however, we’ll run into many more of these situations as we ween ourselves off the oil economy.

The police have laid a charge in the 10-year old murder of Kevin Bowser. The accused, Shilo Marcino Beals, is at large, and presumed to be in the Halifax area.

Halifax food trucks now have a smart phone app, which tells which trucks are open and where they are.

6. A message from Charles

You never know what the crown prince will say when he messages you, but this time it was it was “thank you” to the kids at Hope Blooms for the bottle of salad dressing they presented Charles when he was in town in May.

Jan appears to be into the wine again, talking about her international travel and embracing the crazy cat lady lifestyle. Amazingly, though, she holds off on insulting Maritimers.

Marilla Stephenson surveys the various scandals associated with economic development agencies and other government programs, wrings her hands, and concludes that the problem is simply people behaving badly. A better suggestion is that grift is endemic to such agencies by design (behind paywall).

Bruce Wark is the epitome of the seasoned journalist. He worked for the CBC for 19 years, covering the Ontario legislature, then the Maritimes, before moving on to produce network programs like The House, World Report, and the acclaimed Media File—I understand Media File was cancelled after Wark took aim at the CBC itself. After the CBC, Wark taught journalism at King’s and had a column in The Coast, where I met him. His willingness to call things as they are has long been an inspiration to me, and I’m sad that he’s moved on to semi-retirement, living in Parrsboro and shaking up the local community radio station. He also maintains Media Spin, a site dedicated to “pinpointing the propaganda.” This week, for example, he corrects an oft-repeated falsehood: “Conservatives didn’t create the CBC, damn it.” While you’re at it, check out Wark’s previous post, which examines the problems with polling.

Mainport Pine, back to BP Survey
Seoul Express, to Southampton.

I was invited to speak at a meeting for Open Government advocates last night. Most of the attendees were people working on open data sources, using government data to build apps for things like transit times, and so they cast a mostly uncritical eye on the open data movement. I fear I peed in the pool, and was somewhat disruptive. Here are my speaking notes:

The Freedom of Information process has gotten worse, not better, over the past decade. There are several layers to the problem, as follows.

Delay is now the default response of government to request for information. Under the NS Freedom of Information law, agencies have 30 days to respond to access requests, but can claim another 30 days if the request is especially onerous. But now ALL requests are considered onerous, and the 30-day extension is automatically claimed. In reality, even the quickest responses are now typically three to five months.

Relatedly, appeals to the FOI review officer are a joke. I’ve got seven or eight applications to the review office, and have gotten nothing back. Some of these appeals are probably five years old. Someone told me last week they’ve been waiting seven years for a review. With this kind of delay, our Freedom of Information Act is meaningless.

Now, routinely, agencies use the excuse that they need the agreement of third parties before they release public information. Examples:

• I’ve requested information from Culture & Heritage about a developer moving human remains from a grave site, and the permitting around that. I’m of the opinion that if there are any third parties involved, it’s the dead people, but Culture & Heritage says the developer is the third party, and so the request is going nowhere.

• A couple of months ago, I filed a federal Access to Information request with ACOA. I wanted communication between Peter MacKay’s office and ACOA about a company that received multiple ACOA grants and loans. I have reason to believe there was political interference/favouritism in the decision-making. My request was for communications between two government offices; I asked for no information that could be considered proprietary to the company, but yet ACOA notified the company that I was seeking this information and has delayed the request. I’ve filed a complain with the federal information officer about this.

• In Halifax, the city government won’t make contracts with private companies public. This is hugely problematic. As an example, the city recently decided to contract out management of most of its rinks to Nustadia, a recreation management firm. This change in policy affects thousands of people, and of course taxpayers generally. But without the contract in hand—without seeing how much we’re spending, and other terms of the contract—there is no way for the public to assess whether the policy change has merit.

ENTIRE CLASSIFICATIONS OF RECORDS ARE DENIED

• City employee pay. It’s absurd that the pay for every provincial employee is posted on a website for the whole world to see, and yet the city won’t tell us how much city employees are paid, or even when they were hired and left city employ.

• Divorce court records. Nova Scotia is the only jurisdiction I’m aware of that doesn’t grant routine access to divorce court records. This no doubt presents problems for creditors, but there’s also a public interest involved. For example, when I worked in the States, I was covering a politician who had had his court record of domestic abuse expunged, but by going through his divorce court file, I discovered a hand-written note from the politician to his then-wife, admitting he had punched her.

• Death certificates and coroner inquests. The public has a right to know who is dying, and why. There are lots of deaths by suspicious circumstances that are hidden from public view, and so are never properly investigated. In other jurisdictions, by examining death certificates, I was able to report on a botched liposuction operation and a death by electrocution of a migrant worker whose family spoke no English. In both cases, legal action started only because of my reporting. There must be hundreds of similarly suspicious deaths that we never hear about.

• Police records. Police have the power of life and death over citizens, and can detain a person in jail without charge for up to 48 hours. We should know who is being arrested, especially if there are no charges, because it could be an indication of harassment or racial profiling.

Collectively, the problems with access to information in Halifax seem to be cultural, with a paternalistic, colonial attitude on the government side, and a “don’t make waves in Canada’s ocean playground” mentality among the public.