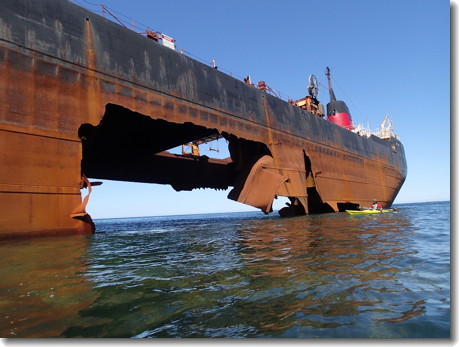 The MV Miner is disintegrating off Scatarie Island. Photo: http://www.coastaladventures.com

The province is preparing to execute a $12 million plan to remove the MV Miner from Scatarie Island. The decommissioned cargo ship broke from its tow line and crashed into the island in 2011, and has been wedged on the rocks ever since. Supposedly we need to “clean up” the ship because Scatarie is a protected wilderness area, but you have to wonder whether the cure is worse than the harm. CBC reports that the clean-up operation will consist of 40 workers with a camp on the island, with water and sewage facilities brought in, and with salvage consisting of digging out the land side of the ship.

An alternative approach, says Scott Cunningham, would be to just let the ship rot. He points out that there are hundreds of shipwrecks around the Nova Scotia coast, and that we don’t seem to be any worse for them. Nature does her work, and eventually removes them. Cunningham might have some self-interest at work: he owns Coastal Adventures, a firm that organizes sea kayaking trips to Scatarie Island, and viewing the wreck appears to be part of the attraction. But he’s got a compelling photo essay about the island on his website, and he recently penned a wonderfully cranky letter to the Chronicle Herald.

In anticipation of what’s sure to be an ugly public meeting about the Africville dog park on July 23, the CP interviews some of the former residents, who understand there is “process” to follow, but fear they are getting shafted again.

Apparently, the Southern Baptists think Nova Scotia is a lot like the deep American South, so their missionaries are coming up here every year with the aim of indoctrinating our youth and spreading their sectarian propaganda.

Twenty-one people were on the bus and four were injured, one seriously, says the CBC. Let’s all slow down and stare.

1. NSP and the convention centre: failures to communicate

Stephen Kimber notes that Nova Scotia Power’s poor response to Arthur has more to do with cutting maintenance of lines and reducing line staff than with communications. He then notes, with regard to the North American convention market, that the LA Convention Centre is waiving its normal quarter-million dollar plus fee and is actually paying the American College of Chest Physicians to use the convention centre’s facilities in 2016. That, says Kimber, should give us pause about the state of the convention centre industry, and about our own convention centre, now under construction. Yes, yes, we can hear the boosters now: Halifax is different.

Board of Police Commissioners (12:30pm, City Hall)— As usual, the Halifax Examiner will be there. There’s not a lot on the agenda, but the Youth Advocate update should be interesting. I’ll have a report in the afternoon.

Harbour East-Marine Drive Community Council (7pm, Nantucket Room, Dartmouth Sportsplex) — This is a special meeting called to consider the rezoning and redevelopment of the proposed Erindale Estates in Eastern Passage. I’ll have more on this in a couple of days.

Open Government Tour—Halifax (6:30pm, The Carlton Bar & Grill)—I’ll be one of the presenters at this event tonight. The Open Government Tour is organized by Richard Pietro, the founder of CitizenBridge, an organization devoted to opening up government and easing the access to public records. The event is being held in a tavern with the hope of encouraging discussion, both among the presenters, and with the attendees, which means you. Please join us. Click here for details.

My former Coast colleague Carsten Knox left The Coast because he landed a job om-ing with the Buddhists, but I’m glad to see he’s still writing the occasional movie review, this time about Dawn of the Planet of the Apes.

Because I was in the area, this weekend I took an hour or so to hike up to the summit of the redundantly named Blue Mountain Hill, a promontory above the Birch Cove Lakes. The hilltop and the lakes are within a provincially designated wilderness area, and the city is committed to creating a municipal wilderness park in the area, albeit negotiations to buy out private landowners are taking forever. This is basically the area behind Bayers Lake Industrial Park, stretching to Hammonds Plains.

Initially, the wilderness park proposal was based on taking crown land east of the proposed Highway 113 route and buying out the four development companies that own land in the area. But last year, when the province reached its goal of giving wilderness protection to 12 percent of provincial land area, it did so by adding in all the crown land west of the highway route as well, doubling the size of the wilderness. But the provincially designated wilderness and the municipally designated wilderness no longer line up: the city proposal is just for the land east of the highway corridor.

The original proposed routing of the highway called for using Blue Mountain itself as a quarry for the roadway, and siting the highway pretty much right on what used to be the summit. Thankfully, that idea was reworked: the hill will remain, and the road will be slightly to the west. Still, we’re left with a proposed highway splitting the wilderness area in two.

I didn’t realize just how bad the situation was until my hike. The route to the summit of Blue Mountain started by following a logging road from the end of Anahid Drive in Kingswood. About 15 minutes in, I found the trail to the left. It went through some heavily logged areas, but after two water crossings, I found myself in the wilderness area and the trees were suddenly much bigger. Whoever is maintaining this trail has done a good job, building the log bridges over the creek, marking the trail, and adding this sign, right where the highway is proposed: 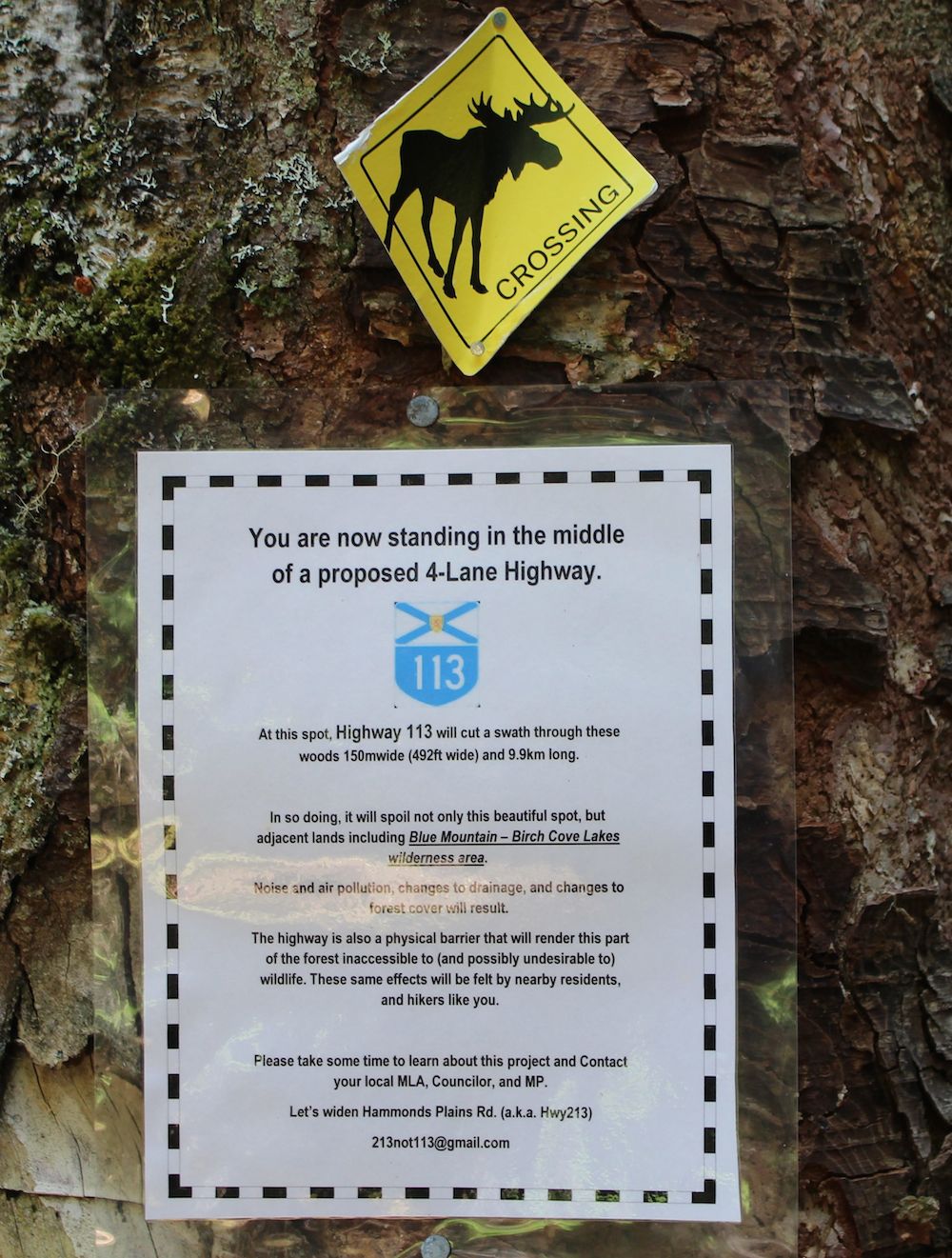 From the sign, it’s only about another 10 minutes to the summit. The “Mountain” isn’t really that high, but it does provide interesting views of the harbour and Clayton Park.

There’s still time to reverse the decision to build the $100 million+ highway.