Sparks, who is from the Black community of Lake Loon/Cherry Brook, graduated from MSVU in 1974 with a bachelor of arts in economics. She was the only woman of African descent in her year of law school and went on to co-manage the first all-female law firm in Nova Scotia. 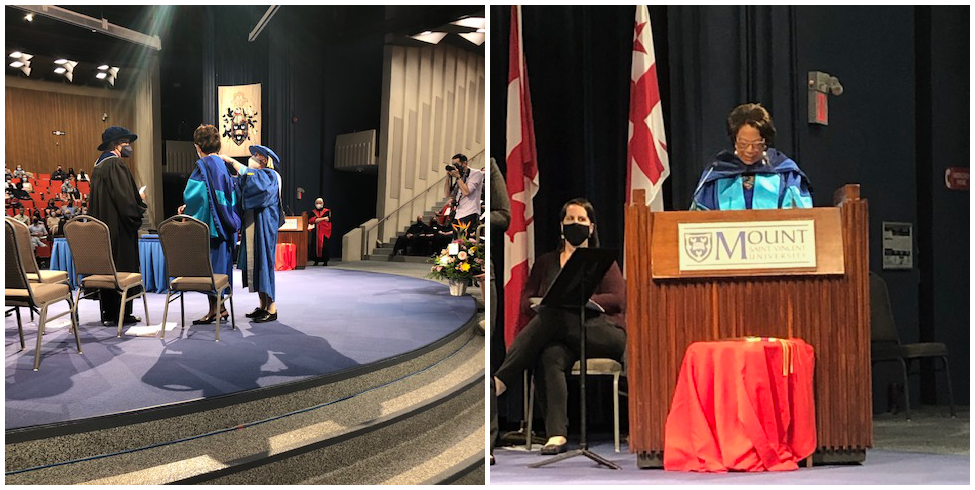 “This list of firsts would be impressive on its own,” said Dr. Elizabeth Church, who presented Sparks with the honorary degree, “but Connie’s impact has been even more profound through her deep commitment to her community.”

Those accomplishments include helping to create the African Nova Scotia Access to Justice Judicial Committee, serving on the Gender Equality Task Force of the Canadian Bar Association, which documented the discrimination and barriers that women and racialized people face at all levels of the legal profession, and mentoring African Nova Scotians who wanted to become lawyers and judges.

Sparks also established the Judge Corrine Sparks Community Award at MSVU. The award is presented annually to a student at MSVU who has demonstrated service and contribution to the African Nova Scotian community.

Church also spoke about the impact Sparks had on Canadian law.

The 1997 Federal Supreme Court decision upheld a decision Sparks made in December of 1994 when she acquitted a 15-year-old Black male youth who was charged with assaulting a police officer in the execution of his duty, assaulting a police officer with the intent to prevent an arrest, and unlawfully resisting arrest stemming from an October 1993 incident in Uniacke Square.

Details of the case were included in the book Burnley “Rocky” Jones Revolutionary, which was written by Rocky Jones and co-authored by James W. St.G. Walker. Jones defended the youth in the case.

“As we entered the courtroom, and this was first time this had ever happened for me, I saw that the court clerk, the client, the lawyer and the judge were all Black!” Jones wrote in the book.

The trial heard conflicting testimony from the arresting officer Donald Stienburg, who said the accused ran his bike into him and started beating him on his chest while he was trying to make an arrest. The accused said he didn’t make physical or verbal contact with the officer and instead asked his cousin who was being arrested if he wanted him to contact his mother.

During the youth’s testimony, Jones said it also came to light that Stienburg had also placed a chokehold on the youth and knocked him unconscious.

In the end, Sparks decided to acquit the 15-year-old.

“I’m not saying that the constable misled the Court, although police officers have been known to do that in the past,” Sparks wrote in her decision. “And I’m not saying that the officer overreacted, but certainly police officers do overreact, particularly when they’re dealing with non-white groups. That, to me, indicates a state of mind right there that is questionable.”

“I believe that probably the situation in this particular case is the case of a young police officer who overreacted. And do accept the evidence of Mr. S that he is told to shut up or he would be under arrest. That seems to be in keeping with the prevalent order of the day.”

When the case was appealed, the prosecution accused Sparks of racial bias towards the police.

“The community was stirred up about this, because after all those years of Black people experiencing bias from police and courts, now, for the first time, a Black judge gets accused of racial bias,” Jones wrote in his book.

Jones went on to argue the case all the way up to the Supreme Court of Canada, which upheld Sparks’ initial decision. That case R v RDS (SCC, 1997) continues to be studied in law schools across Canada to this day.

‘I think we’ve all been there’ 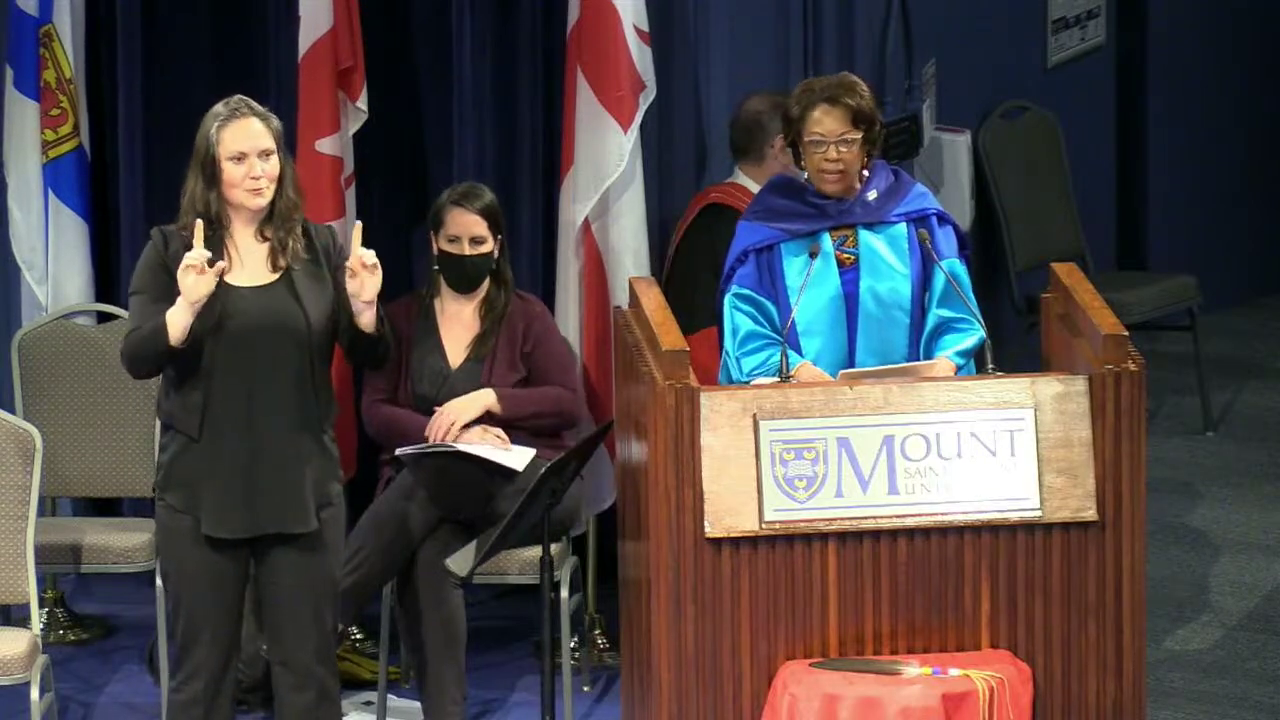 After being presented with her honorary degree, Sparks delivered a speech in which she talked about the meaning of success.

“You graduates are living in an era where financial gain is at times extraordinarily excessive and therefore creates a surreal financial zone of the mega-rich. But I would suggest we should ask the question of how financial reward is leveled in our society, and should we, more importantly, be striving for a world which works for everyone where even those who do not have the advantage of post-secondary education, a degree or a diploma can still generate a modest living tied directly to a livable wage.”

Sparks also talked about how success can have different meanings based on time period, in how men and women measure success, and how success can be measured in terms of money and power.

“At times it seems the very ones who seek power are the ones who at times abuse power for their own personal gain. It seems to me the true test of power as a determinant of success is how an individual executes power and whether it is utilized to alleviate the mistreatment of others and is used to help create a world which works for everyone,” Sparks said.

“Generally speaking sometimes, however, success can be simply the satisfaction at the end of a busy and draining day. And success can be getting back up after being knocked down five times. I think we’ve all been there.”

Since retiring in December, Sparks was appointed as a commissioner with the provincial Land Titles Initiative, which seeks to correct historical racial inequalities and barriers with respect to land ownership in the province’s Black communities.

Sparks was one of three women who received honorary degrees from MSVU as part of it Spring 2022 convocation. The other recipients were Dr. Marie Battiste of the Potlotek First Nation, who is an advisor to the Cape Breton University on decolonizing the academy, and celebrated Atlantic Canadian textile artist Deanne Fitzpatrick. 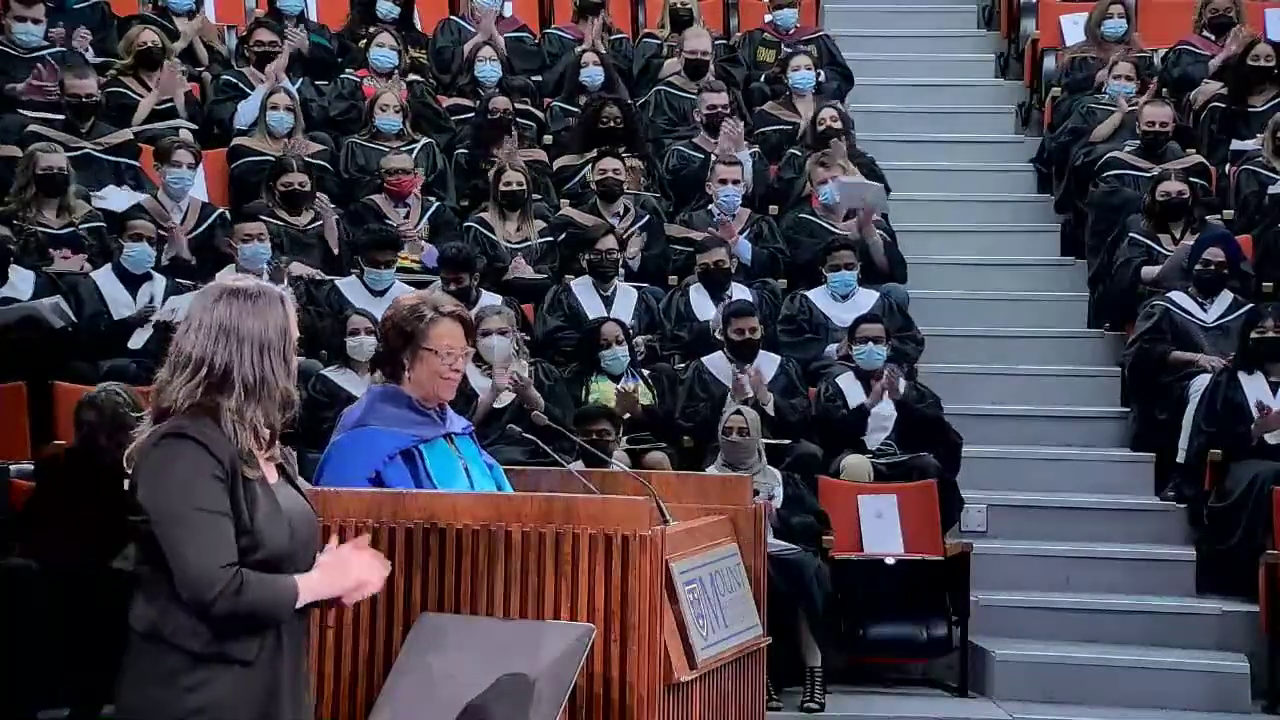