You are here: Home / Featured / Another day in Halifax: resignations, engtanglements, and delays 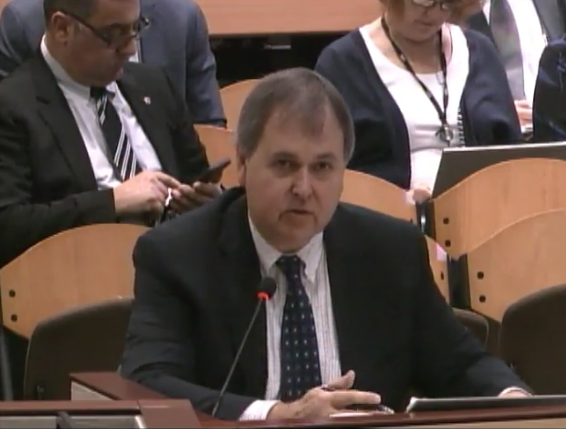 Director of transportation and public works Bruce Zvaniga has resigned, reports Zane Woodford of The Star/Metro. Zvaniga has only been at the helm of the massive public works department since 2015.

Zvaniga is the third key senior staffer to go in recent years, along with former finance director Amanda Whitewood, who left shortly after an incident involving a bizarre text from CAO Jacques Dubé, and Chief Planner Bob Bjerke, who was suddenly fired by Dubé last year.

Woodford got a reaction on the resignation from councillor Tim Outhit, chair of council’s transportation committee:

“I’m a huge fan and I will miss him very much,” Outhit said. “I think he’s been a breath of fresh air when it comes to a can-do attitude or a ‘Let’s investigate and see what we can do’ sort of approach.”

2. Community Services loses in court, but may not change practices

This is the second time this year that the court has ruled against Community Services’ interpretation of its own regulations, but, reports Devet, the lawyer involved in both cases says the department has still not updated its policy manual to reflect the first court decision. A community legal worker didn’t mince words in giving Devet her take on what’s going on:

“Community Services flouts the law, all the time,”  says Fiona Traynor, a community legal worker with Dalhousie Legal Aid. “What the decision shows is that Community Services contravenes the actual laws that govern the administration of the Income Assistance program.”

“Not only are they denying people what has been found to be fair at the Appeal Board level, they pay lawyers to battle people who live in deep poverty and with serious disabilities at all levels. How much of our tax money do you think that costs,” Traynor wonders.

3. Another entangled right whale in the Bay of Fundy 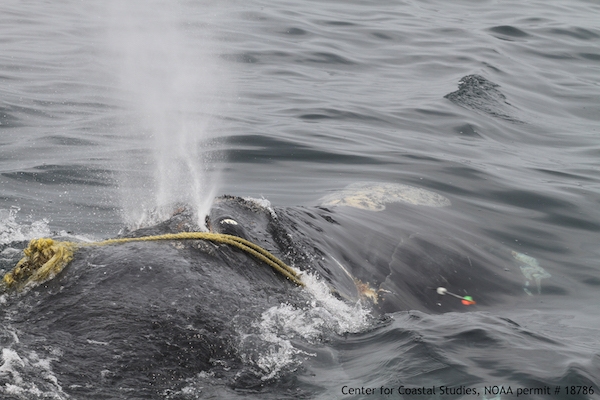 Right whale #1142 taking a breath at the surface, just as the arrow approaches the entangling rope around her upper jaw. Center for Coastal Studies, NOAA permit #18786.

CTV Atlantic reports that Campobello Whale Rescue Team is tracking an entangled right whale in the Bay of Fundy. The Department of Fisheries and Oceans has closed off two areas to fishing due to right whale sightings, in the Grand Manan Basin and the Gulf of St. Lawrence.

4.  Looking into what’s taking so long for medical transitioning

The CBC’s Carolyn Ray reports on delays for people in need of medical gender transitioning through hormonal therapy or gender affirming surgery, and a new research project funded by the QEII foundation which is looking into how to reduce the complexity and delays in the system.

Each type of therapy has different billing codes, making it challenging for the Nova Scotia Health Authority to assess the demands on the health-care system.

“Navigating to all those referrals and assessments and associated treatment along the way, if needed, is complex to navigate and time-consuming,” said Kolten MacDonell, the health services manager for the health authority’s central zone.

Under #codecritical, the Nova Scotia paramedics union is trying to draw attention to issues with ambulance availability. When an area runs short on ambulances, Emergency Health Services calls in vehicles from neighbouring areas, as they did on Sunday, according to a union tweet.

“We’re probably having a lot more code-criticals than we’re tweeting out,” Nickerson said. “It happens every day, all across the province, unfortunately. I’m not sure if it’s getting any better. I would say it’s probably status quo.”

It’s mainly a problem at the Queen Elizabeth II hospital in Halifax, but it also happens at the Cape Breton Regional Hospital and other hospitals across the province, he said.

1. A glimpse of being Black and a tourist in Halifax

How did I miss this one? Back in June, Torontonian Cheryl Thompson took over Voice of the City at The Coast, and tells a bit about what touring Halifax is like as a Black woman.

Some days, I walked into a new cafe and I felt like all eyes were on me. Other days I felt right at home. It’s not that I wasn’t “allowed” into these spaces. It’s that for 14 days I saw very few people who looked like me in these spaces where, as a tourist, I entered without hesitation.

2. Austin changes his mind on tobacco, but not cannabis

Sam Austin has written a blog post explaining how he has changed his mind when it comes to HRM’s new nuisance by-law changes, which would make it illegal to smoke on municipal property except in designated spaces.

The changes to the Nuisance Bylaw are starting to feel like the worst of all worlds, a ban that’s not really a ban, that will consume a lot of time and energy and that is simply not practical. This feels like micromanagement of public space and I have come to conclude, as much as I would like smoking to disappear, that HRM’s approach doesn’t make practical sense.

And then he announces that he will attempt to add an item to today’s council agenda asking for a report on simply removing tobacco from the bylaw, and leaving cannabis as the prohibited-to-smoke substance on all municipal property.

What I will propose tomorrow [Tuesday, Juy 31] as an added agenda item (my colleagues have to be willing to add it to the agenda) is a request for a staff report to revisit changes to the Nuisance Bylaw to remove tobacco from the prohibition on smoking on municipal property. Removing tobacco from the Bylaw would mean that it would still prohibited to smoke cannabis on all municipal property. Maintaining restrictions on cannabis is important because we’re setting the post-legalization community standard for HRM. It seems reasonable to me that since you can’t walk down the street drinking a beer, the same should be true of cannabis.

Mars is only 57.6 million kilometres away from Earth today, making it about 5 times brighter, and so, it may be worth stepping outside tonight and craning your neck to the southeast.  The CBC has the scoop. 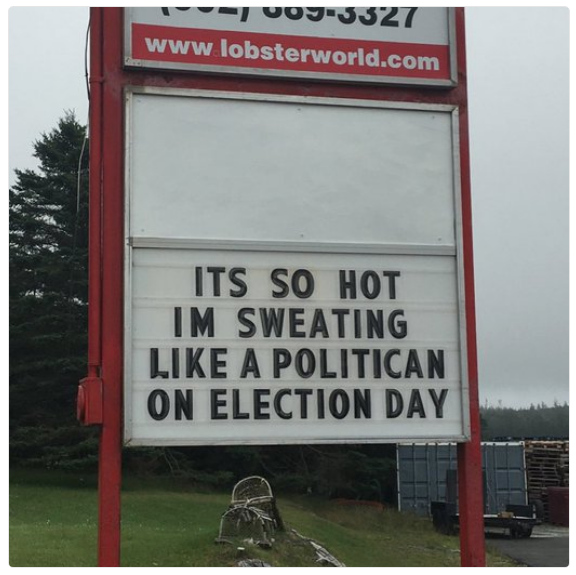 Hendsbee misidentifies the joke as a pun, but then makes up for it with two of his own:

July 2018 – while driving through my district along the beautiful #EasternShoreNS, I see this sign with its pun of the month – Glad to see http://www.lobsterworld.com  is coming out of its shell to show a little humour! Cheers & For Cod Sake stay Cool! ⁦@lobsterworld⁩

City Council (Tuesday, 10am, City Hall) — agenda Tim will be live-blogging the meeting at @hfxExaminer, but will probably be a bit late.

Tim will be sitting through today’s Halifax regional council meeting in order to bring you a series of clever and informative tweets, available here:  https://twitter.com/HfxExaminer