You are here: Home / Featured / Residents stage protest to get drivers to slow down on Robie Street 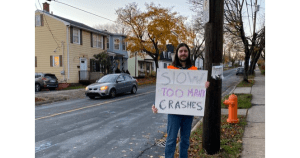 Steve MacKay launched a protest near his home on Robie Street Friday afternoon after a two-car collision happened nearby. MacKay says it’s the fifth crash on the street since June. He and neighbours gathered to try to get drivers to slow down. Photo: Twitter

Steve MacKay has had enough with speeders on his street in north end Halifax. On Friday afternoon at 2:30pm, while he was working from home and watching his young son, two vehicles crashed near his house on Robie and Stanley streets.

MacKay went outside and learned one of the drivers ran a stop sign going through Stairs Street and hit another car driving on Robie Street. No one was hurt, but there was significant damage to both vehicles.

“The airbags went off in both [cars],” MacKay said. “I doubt those cars will be back on the road.” 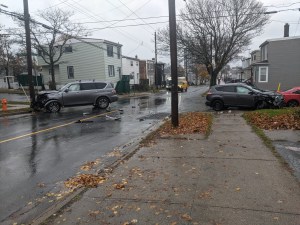 The collision on Friday that prompted Steve MacKay to host a protest to get drivers to slow down. Photo: Steve MacKay/Twitter

MacKay has been documenting crashes along this strip of Robie Street for the past five years. There have been five crashes here since June, including a head-on collision that killed an 80-year-old woman.

After Friday’s crash, MacKay decided he had to do more.

“First I knocked on the doors of the neighbours where it happened,” MacKay said. “I said, ‘Here’s what I want to do. Are you guys down for this?’ Then I just started knocking on neighbours’ doors. Some people were quite enthusiastic about it. Other people were, ‘Oh, don’t you think we should contact the city first about this?’ I’ve been contacting the city for five years about this.”

MacKay and several neighbours staged a protest on Robie Street Friday afternoon. They even gathered together five green bins and placed them in the middle of the intersection where the collision took place as an ad-hoc calming measure for the street. Cars and buses could easily manoeuver around the bins, and MacKay said drivers did slow down. MacKay also documented the protest on his Twitter account. 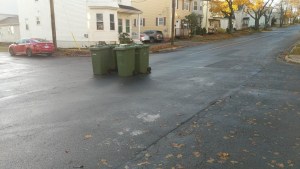 MacKay and his neighbours set up green bins in the intersection to get drivers to slow down. Photo: Steve MacKay

MacKay said the biggest issues in the area are speeding and drivers running through the stop signs on the side streets. He’s been out on the street before timing drivers’ speeds, and he said he’d caught some drivers going up to 90km/hr. The speed limit here is 50km/hr. Most of the crashes happened at the intersections along Robie, including those at Stairs Street, Stanley Street, Columbus Street, and Livingstone Street.

On his Twitter account, MacKay shared a map that has red dots that shows where crashes have happened, and according to that map, there have been 21 collisions or crashes since January 2018. MacKay has collected photos of many of the crashes, including those where vehicles have flipped over.

During the protest, another Twitter user checked out the traffic flow for that afternoon and it appears the green bins and the protest helped slow down traffic. 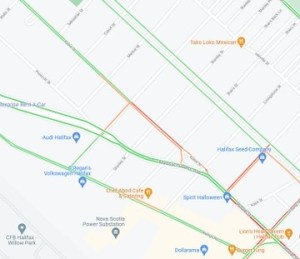 A traffic map that shows how traffic slowed on Friday afternoon during the time of the protest.

At 5pm when the street lights came on, MacKay and his neighbours ended the protest.

MacKay said he’s contacted his district councillor Lindell Smith three times over the years, about speeding in the area. MacKay said Smith only told him he’d have traffic services look into the issue. He said he told Smith he was going to get together a petition and Smith said there was no need. MacKay stopped emailing Smith and now just tags the councillor on Twitter when a collision happens on the street.

The Examiner reached out to Smith for comment on this story. We will update this article when we hear back.

But MacKay said something needs to be done to slow drivers down.

“It would be nice if they started with anything,” MacKay said. “They’ve done studies on the cross streets. They looked at Robie. They say they can’t do anything about Robie because the buses go down it, the ambulances, the fire trucks. If a fire truck has to slow down for two or three seconds to get to a call, maybe that’s worth it if they don’t have to show up here on a monthly basis.”

MacKay has plenty of suggestions, including adding four-way stops; flashing stops signs would work, or maybe a traffic calming centrepiece. He also suggested capping off Massachusetts Avenue so drivers can’t take shortcuts through the side streets in the area.

“If you put in a four-way stop the chances of two cars blowing a stop sign at the same time are slim,” MacKay said.

MacKay said a neighbour once painted a crosswalk on Stanley Street at the corner of Stanley and Robie and painted a stop bar line, too, which the city removed within three days.

MacKay said he’s not sure about another protest, but he is working on that petition now.

“We’ve all been bugging the councillor about this and getting nowhere. It’s time to come together as a community and organize.”

Update: Coun. Lindell Smith sent along this response in an email to the Examiner, which he said he’s also shared with residents on Robie Street:

I spent some time with staff on site in the area of Robie St. (between Livingstone and Lady Hammond) in late September to discuss potential solutions, this meeting comes after making various request on behalf of residents and from concerns I raised as well. (I have also attached a photo that showed the studies that have been completed) After having many assessments done in this area, I asked for us to take a more holistic approach to deal with the conflicts we are seeing in this area.

Robie St. is considered a Minor Collector and the area of focus that our traffic analyst studied was Robie St from Memorial Dr to Livingstone St. There is an open request to assess Robie St from Livingstone St to Lady Hammond Rd but all of the data has been collected to support the review. Once the data is collected, it will be ranked under our new traffic calming policy. The new traffic calming policy is currently under review and if approved by Council, all of the currently ranked streets will be reviewed under the new policy. Staff are hoping to have the new rankings done by spring so they can use them to select projects for our 2023 budget. There is also a larger review of collisions in the area that will help determine if any future redesigns are warranted.

So over all, the entirety of Robie St from Memorial Drive To Livingstone St Traffic is currently being assessed for future traffic calming measures to hopefully assist with slowing down vehicles. This may not be implemented until 2023, however this the best medium term solution we can pursue right now. As information becomes available I will share it with residents who have reached out with concerns.