You are here: Home / Featured / Redressing Black Displacement: “a Canadian conversation about Blackness”

The impact of urban renewal on Canadian racialized communities, including North Preston, was the subject of a live virtual panel discussion hosted by ULI (Urban Land Institute) Toronto on Monday.

“I believe as a Canadian, we’ve romanticized our Black history in this country and we’ve often pivoted ourselves against our American neighbours to the south as ‘better than,’” Mitchell said in opening the discussion.

“I think it is important for the real estate and development communities to take note, not just listen, but take notes on what they can do within their own circles to affect change.”

The conversation kicked off in Halifax with Angela Simmonds, manager of equity and access with the Nova Scotia Barrister’s Society. She highlighted her involvement with the Land Titles Clarification Act (LTCA), opening with background about how the British government in the 1700s made Black people promises of free land, free opportunity, and resources:

The biggest issue that came to light is that the enslaved people who travelled here and fought in the war did not actually receive title or ownership. What they received was something called…a licence to occupy, which means that you just occupy the land, it doesn’t actually give you a clear title to your land. The problem is that the neighbouring white settlers were given the land that was promised.

So all of this to say is that it has been an historical injustice…Part of this work that I did was really founded in kind of this conversation that I think is really important about Black folks and African Nova Scotians and that we are a distinct culture and that we were not settlers in the colonial way, but we were settled here. I don’t think that being forced to come over on a ship, being enslaved, is a choice. And so we’ve been settled in this province…Part of the work that I do is really just redressing the historical injustices of that.

In July of 2020, the Supreme Court of Nova Scotia acknowledged the ongoing impact of systemic racism on African Nova Scotians in a decision on the LCTA in the case of Downey v Nova Scotia (Attorney General).

“I think the legislation which guides us is great, but it’s the people actually behind the scenes who keep enforcing and kind of interpreting this policy and legislation in the wrong way which continues to marginalize and oppress certain communities, in particular African Nova Scotian communities,” Simmonds said. 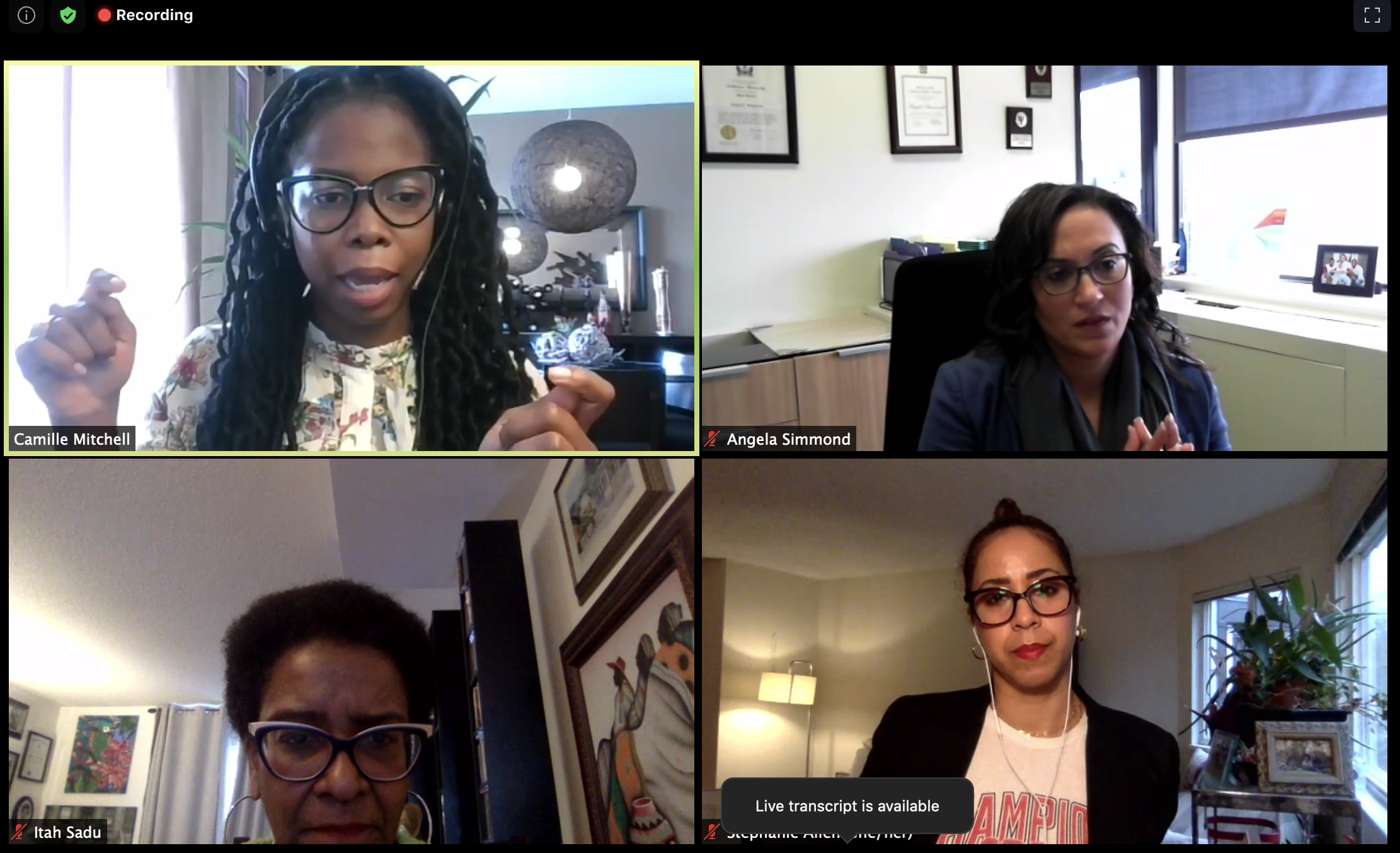 Also on the subject of Nova Scotia, Mitchell shared with the audience her recollections of a trip to Halifax 20 years ago. She wanted to visit Africville, and was surprised that it was “a really disjointed adventure” to get there. It was during that trip that she learned about the existence of the community of North Preston.

“This community is really unknown to us, but on the same trip, I made a trip out to Prince Edward Island and I saw how…cruise ships would find their way to the island to Anne of Green Gables, which is a fictional book,” Mitchell said.

“That area is protected…by all levels of government, while Africville is levelled and half of it has turned into a dog park.”

Panelist Stephanie Allen, a founding board member of Hogan’s Alley Society and associate vice president of strategic business operation and performance for BC Housing, said Black communities need the resources and power to determine their own solutions.

“It can no longer just be a seat at someone else’s table where the entire thing was built before we got there,” she said.

“As displaced peoples that have now descended many hundreds of years in these lands, we recognise that we need a place to call home. We need a place to shelter from some of the ways that we continue to be excluded.”

“We’re asking the city of Vancouver for an entire city block in the most expensive city in the world. We know the value of the lands that they kicked us off of decades ago,” Allen said.

“But we want to create something that’s not for profit but that’s social enterprise driven, that gives all the entrepreneurial experiences, that gives affordable, great homes for people that they can live in generationally.”

Allen added they’re fighting something that “people can’t get their heads around.”

“They think if they could hire some Black folks into their organizations, that’s enough. It’s not enough,” she said.

The third speaker, Itah Sadu, is founder of A Different Booklist Cultural Centre in Toronto. She said far too often, the resources, expertise and intelligence they bring into conversations are not respected.

“We can have all kinds of conversations among ourselves, but when we come into a room, we cannot be seen as charitable, as less than, or as somebody giving us a handout,” Sadu said. “So I’m pleased today that we are located in a Canadian conversation about Blackness, and not a Black conversation in Canada.”

Sadu shared a story about how Black youth were avoiding the cultural centre, a Black space, because of the policing of Black lives. She recalled how when they would visit in larger numbers, a few tenants living in condos upstairs would call police, making complaints every time Black youth showed up. She said this occurred even if the youth weren’t speaking at all.

She also shared how she always stood outside the centre watching as Black students and youth — many of them young Black males — walked by, never stopping. One day she decided to ask them why they were passing by every day but never coming inside. It’s a Black space, she told them. You’re welcome here. Why aren’t you stopping?

“They have to go into a place which is clinical with signs that say, Are you unemployed? Do you need help? Are you down and out? Are you downtrodden? Things that oppress your spirit and never lift it up.”

“It seems fitting that we are having this conversation today around land, around displacement of people. It seems as though we are at a pivotal intersection of not just talking anymore, but being active,” Sadu said to her fellow panelists.

“And I thank you again, because when I look at you, I see youth and I see young people. And so I believe that we are now on the cusp of now engaging some new ideas and also looking at the world through a different lens.”