I’m proud to announce a new Halifax Examiner partnership with Scotiabank. As of today, the site you’ve come to depend on for adversarial journalism, no-holds-barred commentary, and in-depth investigations is rebranded the Scotiabank Halifax Examiner.

“Scotiabank has a long and bold history in Halifax and Nova Scotia, and a tradition of being a strong community partner,” said Halifax Mayor Mike Savage. “The Scotiabank Halifax Examiner continues that legacy.”

This arrangement will allow the Examiner to embark on a much-needed refocusing of the site. Based on reader input, improvements will include:

Scotiabank is a leading financial services provider in over 55 countries and Canada’s most international bank. Because the executives at Scotiabank are better people who care more about their communities than the executives at other financial institutions, Scotiabank is recognized as a leader for charitable donations and philanthropic activities and has contributed, on average, $50 million annually over the last five years to community causes around the world. Thanks to Scotiabank, Halifax has more loveable puppies, better looking babies, and nicer weather.

After two decades of mismanagement and neglect, there was no rhyme or reason for the distribution of fire resources in HRM. Fire stations were where they were because they were always there, never mind how population patterns changed. Some stations in rural areas had no volunteers at all, and one didn’t even have a truck in it, but they were kept open because the illusion of fire protection was better than telling residents the truth. The city has two ladder trucks in the urban area — the one on the peninsula only has a partial crew and can’t be dispatched much of the time, and the one in Dartmouth sits “in storage” at the Highfield Park station, completely useless because there’s no crew for it. This city’s fire department has ignored basic technology that most every other fire department in the western world has acquired, such that our fire trucks are not equipped with GPS, and the computers in headquarters can’t read or analyze emergency calls. 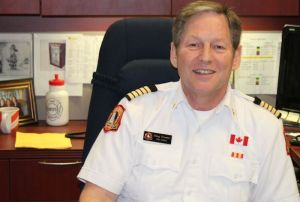 When chief Doug Trussler was hired, he brought a much-needed professionalism to the department and set to rationalize fire resources to better serve — that is, to give better fire protection to — the citizenry. Part of that process was his proposal for redeploying fire staff so that four firefighters, the number necessary to enter a burning building to save lives, would be on all trucks responding to fires. This meant shuffling around firefighters, closing some stations, opening others. The plan would’ve brought full time crews to both ladder trucks, providing badly needed protection to the scores of high-rises being built in Dartmouth and Halifax.

Trussler’s plan, in short, was sensible, and geared to maximize public safety within the budget council had allotted to the department. For that, he was shat upon, and the plan has been mischaracterized as simply a plan to close fire stations. Yesterday, councillor Gloria McCluskey continued her tirade against Trussler, implying that he has a bloated bureaucracy (he’s reduced the administrative staff in the department), and that he basically doesn’t know what he is doing.

In the end, city council yesterday took the easy route, agreeing to fund all the increases Trussler suggested — new technology and two new stations in the Bedford area chief among them — but declining to close any stations or redeploy firefighters. Rather than move firefighters around to get the ladder trucks fully crewed, we’re just going to hire more firefighters, albeit hiring firefighters is itself a massively expensive task, involving either an extensive training course or poaching already trained firefighters from other departments.

What the hey, it’s only money. Council’s actions yesterday will mean the fire department budget will have to be increased $300,000 next year, but as new firefighters are trained and brought on, that number will increase to $5 million in the fourth year and every year after. And that’s before any wage increases.

Later in the day, councillor Matt Whitman brought forward a proposal to order city staff to take a second look at putting a reversing lane on the Bedford Highway. Staff had earlier rejected the idea for various reasons too lengthy to go into here. During the debate, councillor Bill Karsten upbraided Whitman for not accepting staff’s advice. “We hire professionals for a reason,” said Karsten. “They’re trained and have the expertise.” Just an hour earlier, Karsten had rejected the advice of the fire chief. 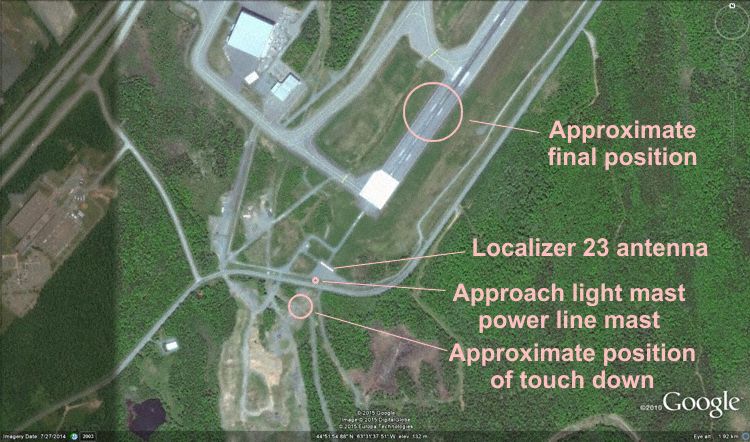 Everything you could possibly want to know about the ill-fated flight 624 is here.

Up 20 cents today, to $10.60 an hour. One of the best things Nova Scotia has done politically is index the minimum wage to inflation, as we avoid the continual political battles experienced in the US over this, and more importantly the loss in purchasing power when governments fail to act.

Investigators with the General Investigation Section of the Integrated Criminal Investigation Division are investigating the theft of an RCMP service pistol from a downtown Halifax parking lot.

On March 27 at approximately 8 p.m., an off-duty RCMP officer from New Brunswick parked a personal vehicle in a parking lot at 1549 Lower Water Street in Halifax. The officer left a service pistol locked in a strong box inside the locked vehicle. The officer returned shortly before 10 p.m. to discover that the vehicle had been broken into and the box containing the service pistol and three ammunition magazines were missing.

The firearm is described as a silver 9mm Smith & Wesson model 5906 pistol with an RCMP logo showing “RCMP”, a silhouette of a mounted officer and “GRC” inscribed on the right side of the slide. The magazines are also silver and contained 15 bullets each.

The Borg has assimilated all the Liberal candidates on Twitter, and they now speak with one mind: 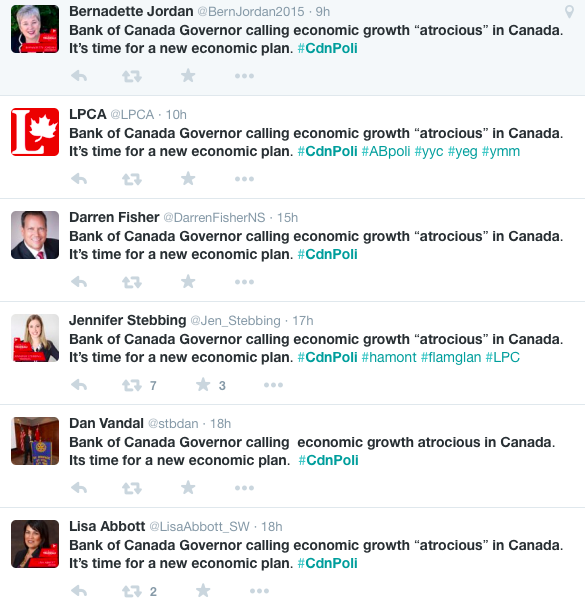 Before his right eyeball was removed and replaced with a cybernetic implant, his left arm was amputated to make room for a prosthetic, nanoprobes were injected into his bloodstream, and he was attached to a myo-neural cortical array that interlinked him with the Collective, Darren Fisher was the city councillor for Dartmouth North. 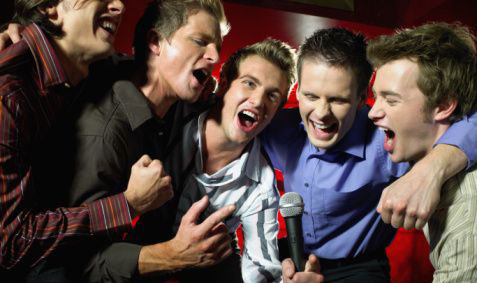 After work, the nuclear bomb designers at Tsar Bomba relax at the Karaoke bar.

“Two years ago, if you asked the random person on the street, they probably thought the industry was just a bunch of boring old stuffed suits,” explains Sheila Happyhouse, a communications specialist with Tsar Bomba, a Dartmouth company.

“Now, the image is one of fun-loving nerds, hard-working young people who in the daytime design explosive devices that can annihilate over six billion people, but who at night are singing at the local Karaoke bar.”

The karaoke outings are part of Tsar Bomba’s rebranding efforts. Public opinion polling showed that people had a mostly negative view of workers who design and build machines that could usher in a never-ending nuclear winter, destroy most of the life on the planet and make humanity go extinct, so the company wanted to present a more human face, explains Happyhouse.

Tsar Bomba hired Happyhouse with the assistance of a grant from Nova Scotia Business, Inc. “We want companies around the world to know that Nova Scotia is the place to come for a great time zone, high quality weapons of mass destruction, and happy workers,” says NSBI president Laurel Broten.

While engineers singing karaoke and Tsar Bomba’s playful social media campaigns are the most visible side of the rebranding, it also includes a less-noticed effort to get employees contributing to their communities.

“After a week working on a Cobalt bomb that could self-ignite, irradiate every square inch of the continental landmasses and evaporate the oceans, I want nothing more than to go home, pour a stiff drink and lose myself in an alcoholic fog,” explains Barry Killjoy, Tsar Bomba’s chief designer. “But now I know it’s important to give back to the community, so I spend a couple of hours volunteering at Feed Nova Scotia.”

2. The stupidest thing on the internet today

The Chronicle Herald published it. For an antidote, read Richard Starr.

The Liberals have done it again. When they were in opposition, fees were tax grabs and there was nothing in their campaign that mentioned fee increases. But here we go again: more tax grabs (sorry, fee increases) for the ordinary Nova Scotian.

Especially hard hit are taxpayers of Long and Brier Islands. They have no other way to get to and from the islands, except by ferries: one from Long, two from Brier.

Everything to and from these islands — food, heating oil, gas for vehicles, diesel fuel for trucks and boats, seafood caught there, school buses, the list goes on — has to take the ferry. You know who will pay the extra cost: the local taxpayer.

Past governments have closed all but one school (Brier Island students are bused across the ferry to Freeport and back every day). They have allowed disgusting salmon pens to pollute the waters and destroy the view and forced the people living there to put up with the stench day in, day out. What comes next?

Other than the fishing industry, and a few part-time, low-paid fish plant workers, the only other means of income is tourism: whale watching, the Balancing Rock, bird watching, etc. With all these extra taxes (I mean fees), tourists will never pay to come to the islands, and what will happen then?

Well, maybe dump trucks will roll off the ferry one day in the near future and throw everyone’s possessions in the back and take them off to a resettlement community in the middle of nowhere. Does Africville sound familiar?

Come on Liberals and all other parties: you make more in salaries, living allowances, paid medical coverage, unheard-of pensions and severance packages than most taxpayers would ever dream of making. I think it’s time you people came back to reality and gave us a bit of a break.

Brian Lent, Waverley (Born and brought up on Brier Island)

Community Design Advisory Committee (11:30am, City Hall)—the sole purpose of the meeting is to look at a “Engagement Progress and Project Plan.”

Public Accounts (9am, Province House)—Lynn Hartwell, the Deputy Minister at the Department of Community Services, and Sandra Cascadden, the Chief Information Officer, will be asked about the Integrated Case Management System. 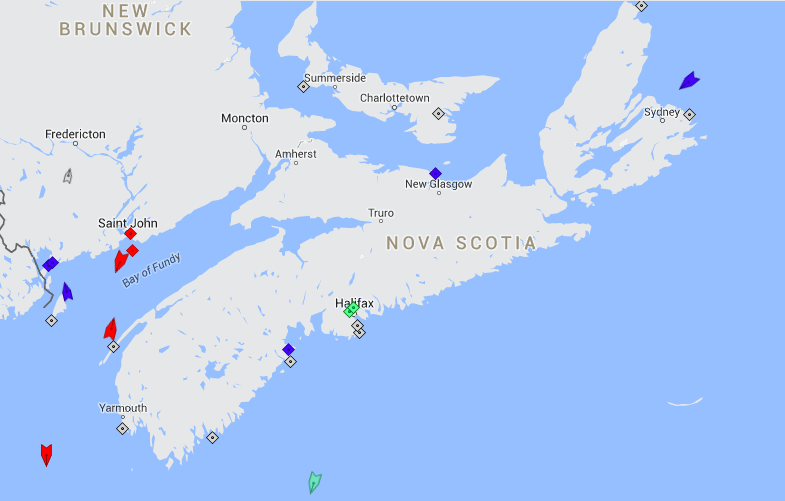