Because we are owned and controlled by corporations now, the Canada Games Centre is selling naming rights to, well, everything:

The asset inventory would identify spaces, programs, services, facilities, and other marketing assets and provide a fair market value based on the audience that is reached through these properties and other identified tangible and intangible benefits. Based on this list, the Centre will then develop a strategy to implement its sponsorship program in a phased approach.

I know that many readers find nothing wrong with selling naming rights — hey, why turn down corporate money! — but this is part of an insidious reshaping of our society, which sees every aspect of life “branded” by corporations. The damn telephone company claims to own addressing mental illness. A bank throws its name on the Metro Centre in return for new seats. The monopoly that controls the electric company names the oval, and on and on and on.

These are public facilities, built with tax dollars. By naming them after corporations we are giving up the very idea of the public realm, where facilities are built and operated in the public interest, with public money, for the public, by the public. The very word “public” loses its meaning. The collective citizenry becomes atomized customers; we no longer have shared purpose or common interests and responsibilities. Our only relationship with our government is as a customer purchasing services, and like all good customers in the modern economy, our only interest is the immediate price — forget quality, long-term costs, or dog forbid such social concerns as environmental stewardship or a living wage for the people providing the services. And because we are concerned only with the immediate cost, we want a reduction of tax payments by any means necessary, and if that means selling off our literal collective soul, so be it.

Every time we brand a public facility with a corporate name, we lose. We can’t place a dollar value on the loss of the public realm, because it is priceless. A few million dollars gained here or there in return is nothing in comparison.

A police release to reporters yesterday:

At approximately 3:22 pm today the Halifax Regional Police responded to the 0-100 Block of Highfield Park Drive in Dartmouth for a report of a pedestrian struck by a vehicle. The preliminary investigation revealed that a 13 year old female was in a crosswalk at the time she was struck. She received minor injuries and was subsequently transported to the hospital by EHS as precaution. This matter remains under investigation to determine if any charges are appropriate. 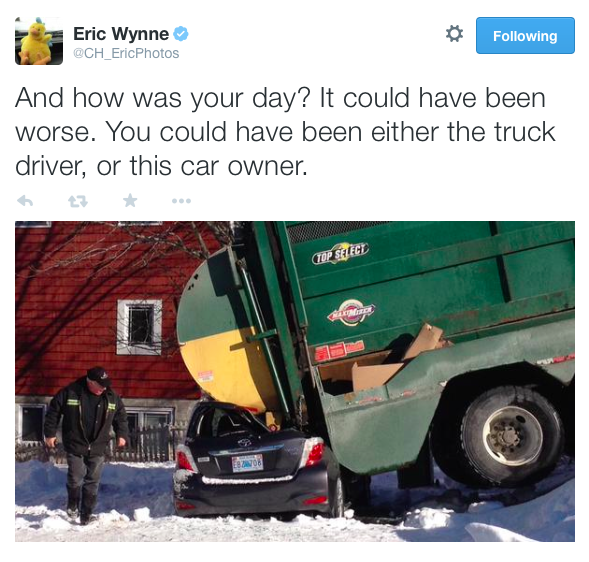 A garbage truck slid down Berwick Street in Dartmouth yesterday, crushing two cars. No one was injured. Berwick Street is one of those steep neighbourhood streets that rise up the hill to the south of Lake Banook.

I knew something was up because my garbage wasn’t picked up until very late. The last time that happened, the truck had backed over an 83-year-old woman. I have no idea if the same driver was involved in both instances.

Sure, the last storm wasn’t anything near the apocalyptic scenario we were warned about, but the next one… 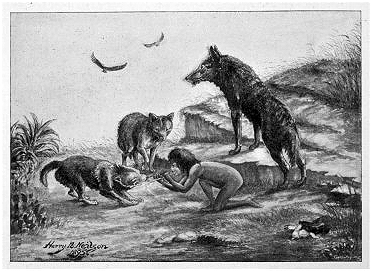 A new preschool is being established in the woods behind Kearney Lake. “It scares me what’s happening with kids with the amount of time they are spending on electronics,” Sally Trower, the coordinator of the school, told Metro. “The kids don’t know how to play outdoors anymore.”

Trower is hoping to raise the kids in style of Amala and Kamala, the two girls raised by wolves in the jungles of Midnapore. 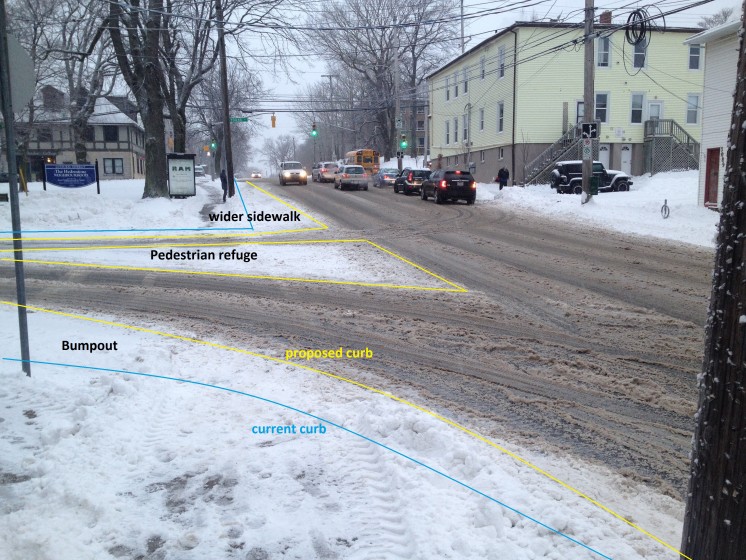 Ben Wedge takes a look at local sneckdowns. A sneckdown is the area in a street that cars don’t use. They become visible on snow days, before the plows come, when cars clear the areas of the street they do use. The picture above is the intersection of Young Street and Gottingen Street, at the little Hydrostone Park, looking north from the ugliest apartment building in Halifax (not pictured), with Wedge’s annotation.

Incidentally, Wedge also mentions the “dead” area on the north side of Spring Garden Road up from Barrington Street. He’s right about that, but his photo also shows the northwest corner of the two streets. This speck of sidewalk worries me, because it’s exactly the opposite of a sneckdown: a portion of sidewalk that’s been taken over by vehicles.

I’ve stood at that corner many times, waiting for the light to change before crossing Spring Garden towards the Old Burial Ground. This is the corner outside the old Saint Mary’s College building, which I think is now an ancillary building to the cathedral. Here’s a Google Street View photo of it; unfortunately there’s no one waiting for the light in the picture, but note the restricted area for pedestrians, bound in by the street in front of them and the building fence behind them: 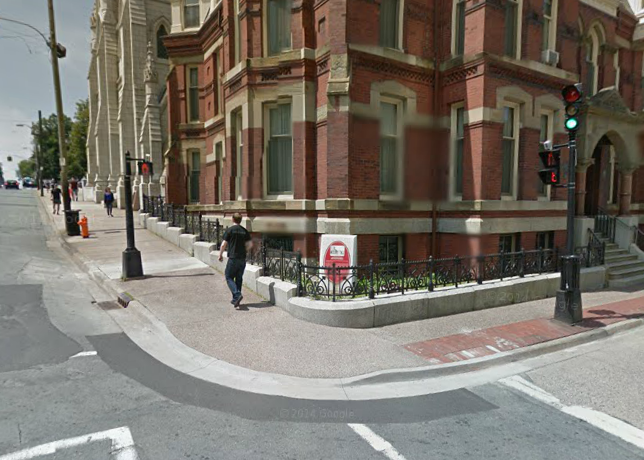 The problem is that the turn for large vehicles — buses, trucks — turning right onto Spring Garden is tight. Very often, the bus drivers in particular make the turn on red, so while pedestrians are standing on the corner waiting for the walking man sign. 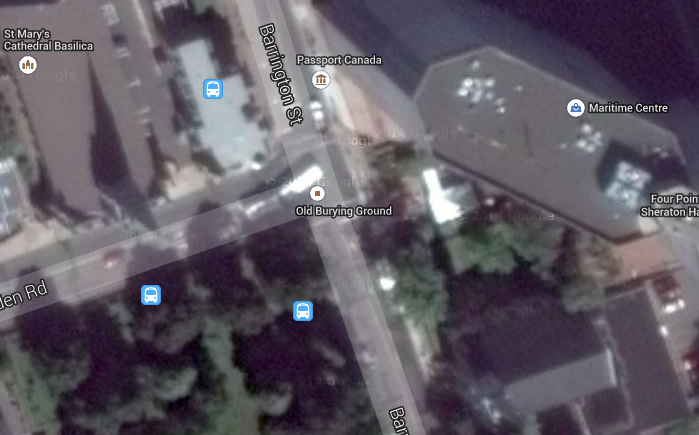 The Google satellite view doesn’t have great resolution, but it does happen to capture a bus making the turn in the opposite direction — from Spring Garden onto Barrington. Note how close the bus comes to the corner.

Now imagine a bus turning from Barrington onto Spring Garden, with roughly the same orientation, except there’s a car stopped at the red light waiting to travel south on Barrington and there’s a car on Spring Garden turning north onto Barrington. My annotation skills aren’t great, but here’s the best I can depict the situation. The bus is the two-part thick red rectangle (symbolizing an articulated bus); everything else is labeled: 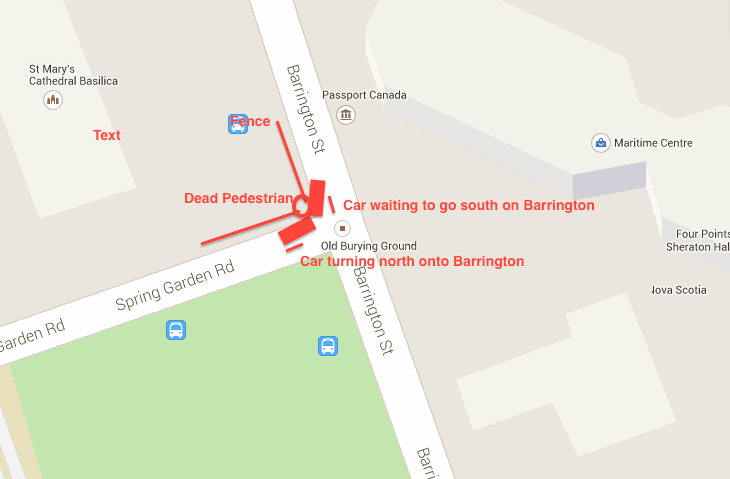 Necessarily, to complete the turn without hitting the other vehicles, the driver of the bus has to make the turn very tightly, sending the rear tire of the bus over the curb and onto the sidewalk at the corner. That situation happens quite often; I’ve found myself many times having to step back as the bus travels across the portion of sidewalk I had just moments before been standing on.

Worse still, there can be a lot of pedestrian traffic at the corner, sometimes a dozen or so people, waiting to walk across Barrington to the Maritime Centre or across Spring Garden to points south, all hemmed in by the fence. Throw in some inattention — people talking to each other as they wait for the light to change, whatever — and there’s real danger. I fear someone is going to find themselves pulled under the wheels of the bus.

This is a dense urban area. There’s no easy solution to the problem, but it could perhaps be made a bit safer if right turns on red were prohibited. At least then the southbound pedestrian traffic would cross before the bus turns right. There would still be those pedestrians waiting to travel across to the Maritime Centre, however.

I very much wish city traffic engineers would have a good look at the intersection and contemplate pedestrian safety, before something tragic happens.

Peter Ziobrowski gives the history of the Central Mortgage and Housing Corporation, which created the “small house” program for returning vets in 1947, but morphed into a “slum” clearance program in later years:

The Small House program was explicit, in that the designs were for modern suburban houses. The housing program was attempting to be distinctly Canadian, and while borrowing from British modernism, American inspiration was rejected. This meant embracing the garden city ideals and modern planning principles. CMHC was now powered by an amended national housing act encouraging clearance of blighted urban slum areas, and a program to develop and encourage affordable  suburban homes.

By March of 1968, there were thirty-seven renewal projects at an estimated cost of $180 million. CHMC Architects and planners  were responsible for the design of many of the projects, including Mulgrave Park in Halifax, and its prototype, Regent Park in Toronto.

Wartime Housing Limited built the prefabricated walls and roof sections in a warehouse on North Barrington Street and delivered them to the crews at the development site to assemble. via http://needhamnews.ca

While looking for a photo to illustrate this section I stumbled upon a 2013 post by an unnamed writer in the Needham News, which discusses the CMCH’s predecessor agency, the Wartime Housing Limited, “which built around 32000 rental properties in various cities from 1941 – 1947 for servicemen, their families and veterans, relieving some of the housing shortage. The prefabricated homes in Halifax were assembled along the old dirt streets including Albert and Vestry, Duffus, Rector, and Lynch beginning in 1941.”

We should all be ashamed of ourselves.

Whaling (Friday, 3:30pm, Marion McCain Building, Room 1170)—Historian Hillary MacKinlay will talk on “On the Far Side of the World? The Whaling Journal of Thomas Creighton, 1843–46.” 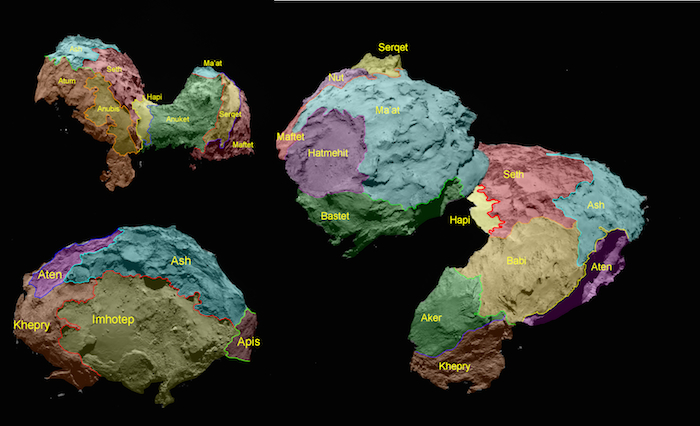 The above is a map of Comet 67P/Churyumov–Gerasimenko, which the Europeans are visiting via an orbiting spacecraft and a dead (so far, it might come back to life if sunlight hits it) landing vehicle. The 19 regions mapped on the comet are “separated by distinct geomorphological boundaries. Following the ancient Egyptian theme of the Rosetta mission, they are named for Egyptian deities. They are grouped according to the type of terrain dominant within each region. Five basic categories of terrain type have been determined: dust-covered (Ma’at, Ash and Babi); brittle materials with pits and circular structures (Seth); large-scale depressions (Hatmehit, Nut and Aten); smooth terrains (Hapi, Imhotep and Anubis), and exposed, more consolidated (‘rock-like’) surfaces (Maftet, Bastet, Serqet, Hathor, Anuket, Khepry, Aker, Atum and Apis).” 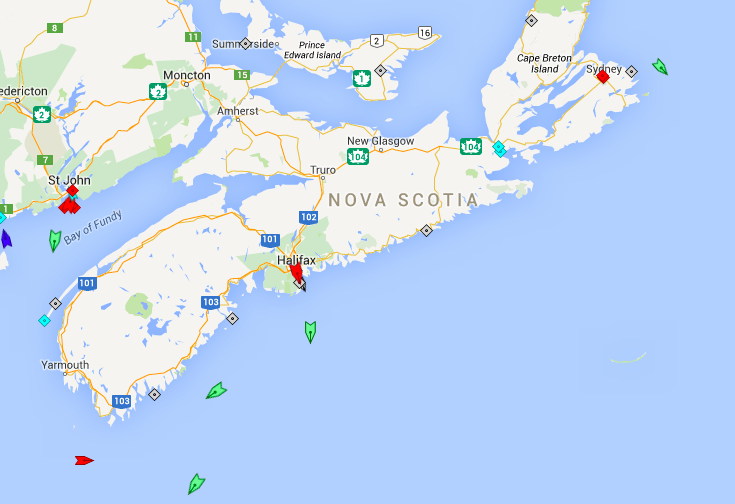 The seas off Nova Scotia, 8:30am Friday. Map: marinetraffic.com

I’m looking to hire an education reporter. Details here. As you can see, it’s a short term project because I want to see how it works out and refine the position as we go along. If it works out the way I hope it will, I might reoffer it in the fall.