Tina Roberts-Jeffers, who has two children attending the school in the fall, saw the graffiti when she met another mother for a playdate in the school’s playground. 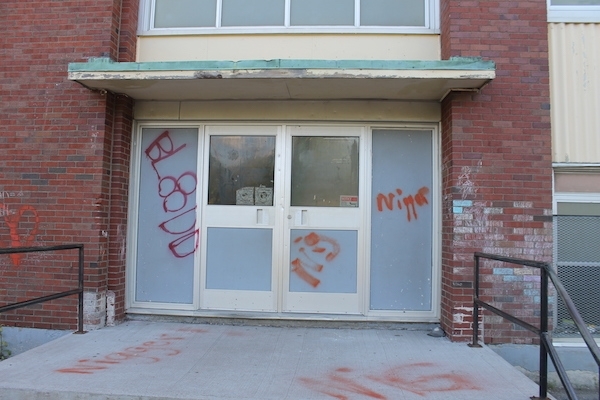 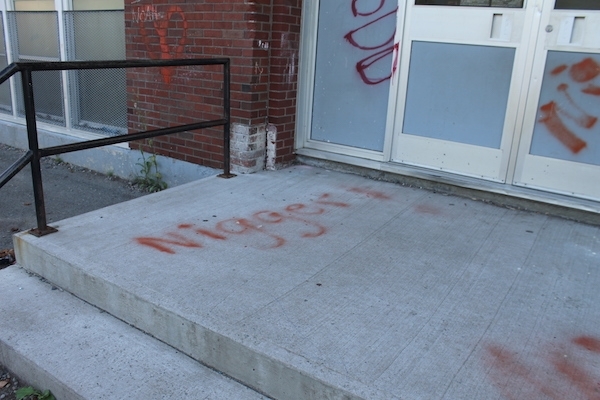 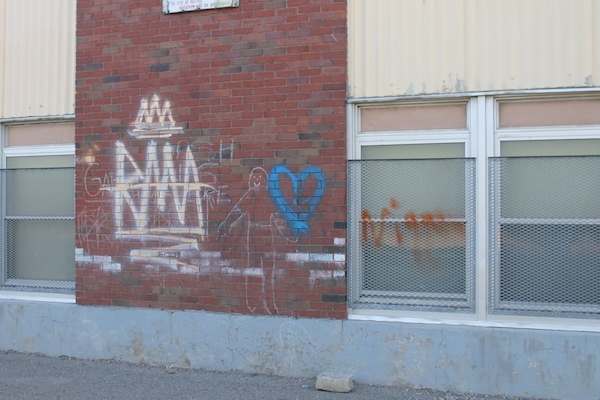 “When I first saw it I just thought, why?  Why here?  Why would someone do this at an elementary school?” said Roberts-Jeffers.

It’s shocking, not because I am unaware that racism continues to exist in our society, but because here it is so plain and clear, written in large letters on the doorstep, doors, and windows of my children’s school.

Racist graffiti has been found on election signs in North Preston, in Africville, on a wall in downtown Halifax, on the Dalhousie campus, spray painted on the East Antigonish Education Centre, and on the hood of Lance Sparks’ car, among other incidents.

The graffiti on St. Catherine’s is particularly disturbing because of the number of families and young children who use the playground and fields, including many families from the nearby military base. Roberts-Jeffers asks:

Where is their safe and sacred public space? Can there be innocent, protected public space for Black children? There is an implied “at least” in that thought, because as a Black adult I’ve already been questioned by the police for just walking down the street, I’ve already been followed around stores, already tracked into less rigorous courses in school, already subject to the routine indignities of racism while just trying to live freely. It’s disorienting and heartbreaking as a parent. I clearly want better for my children.

The playground at the school is the closest play structure to our home. We visit the school for picnics on the field and summer playdates. In September, I’ll have two kids attending. The graffiti is on the school but not of it in my experience.

Still, I don’t know that I’ll be able to stand catching up with other parents after school and not think of this event as I anxiously wait to hear about my kids’ first day of school.

Roberts-Jeffers not only had to worry about shielding her own children from seeing the slurs scrawled on their school, but she was also concerned with managing the public impact of the graffiti.

My first response was to write and call the school board to get it taken down. It was after hours on a Friday in August so I received a lot of out of office replies initially, but left a message with the emergency operations number and received a reply from [Regional Executive Director of Education] Elwin LeRoux stating that it would be taken care of right away.

My brain immediately went to ways to minimize the number of other families or children who would see it.  I don’t know how many people had visited previously. It looked like kids had chalked over other graffiti that may or may not have been from the same incident.

Should I be going to get a pail of paint to cover it up myself? Who has a power washer to clean it from the cement? All sorts of questions and solutions related to a problem that isn’t mine to own. Are there policies and procedures for something like this?

On Saturday morning, while the majority of the graffiti had been removed, the cleaners had missed the slur scrawled on the window grates: 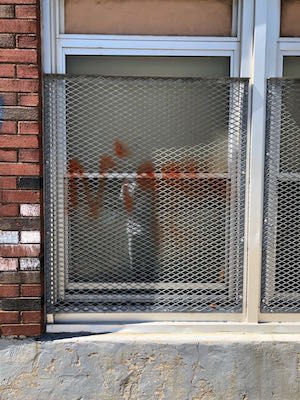 I run by this school nearly every day. When Roberts-Jeffers told me about this incident, my first thought was, “but I live in that neighbourhood!” We know racism is all around us, but it’s still jarring when it stares you in the face in the places you move every day. Where you imagine you are comfortable. Where you are at home.

We are so often told we are imagining or manufacturing the levels of anti-Black racism we experience in society. Incidents like this one break through the fiction that “these things don’t really happen,” but there is nothing satisfying in that.

The likelihood is that this graffiti doesn’t represent any kind of organized white supremacist gang in the neighbourhood — we write these kinds of incidents off to dumb kids trying to be edgy. “I guess ultimately I’m maybe just unsettled, which is likely the only point of the graffiti at all,” Roberts-Jeffers observes.

It’s also unlikely that whoever sprayed this slur across the school’s threshold thought, or even knows, about the history of Black children being segregated in schools in Nova Scotia, or the mobs of violent whites who gathered to spit on the children who integrated schools in the South, or the generations of children forced to read dehumanizing and degrading texts like Little Black Sambo. 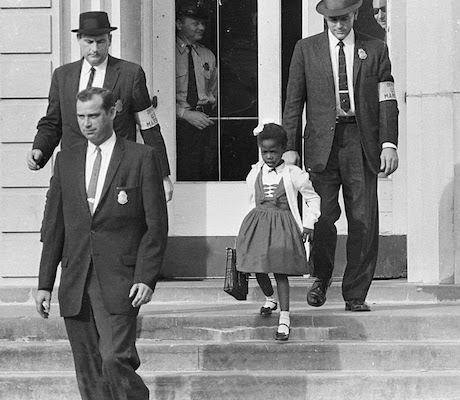 Perhaps whoever painted these words did not see it as a threat against children, or consider what it means to put this word on an elementary school.

But there’s always that feeling now, that the people who live around you might be the ones who went and wrote that word on a place where little children go to learn. And the sheer volume of incidents in the province and city show this is not an isolated incident.

I can’t help but think about how children under five cannot use play structures in Halifax because of safety concerns, but Black pre-schoolers cannot be free from racial violence. We can protect our children from skinned knees, but there’s no way to keep our children safe from a racist world.