You are here: Home / Featured / Quackery and dog whistles: all in a day’s work for the Halifax Examiner 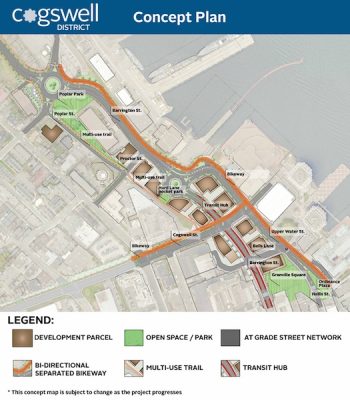 Halifax council yesterday gave its OK to the process for the Cogswell interchange redevelopment project, but insisted that there be more public input as it proceeds.

“If you’re looking for a “natural” remedy for your cough or earache, you can cross Stone’s Drug Store in Baddeck off your list,” reports John McPhee for the Chronicle Herald:

Owner and pharmacist Graham MacKenzie said he’s pulled homeopathic products from his store for a simple reason: They don’t work.

“For quite a while now I’ve been thinking there are some things I’ve been putting on the shelf that I really, I can’t back up at all,” MacKenzie said in an interview Tuesday.

“There’s a growing sentiment I think with professionals that these things really shouldn’t be sold at all. You have to be able to sleep at night when you’re selling stuff to people that doesn’t have anything in it. It’s tough to do that so I just said, enough is enough, I’ll take it out of my store and I’ll try to keep evidence (-based products) as much as I can here.” 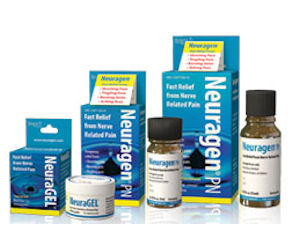 … shouldn’t NSBI have an ethical filter? No matter what the possible export sales income from Neuragen may have been, the Nova Scotian government should not be in the business of promoting quack medicines. Tens of thousands of people were sold a bogus product, costing those people millions of dollars, and that scam — there’s no better word — was facilitated and financed by Nova Scotia Business, Inc. Is there no oversight body to investigate this? Where is the auditor general? Where is the provincial Office of the Ombudsman? Do any of our elected representatives care? What about minister of health, Leo Glavine?

You can read my three-part series about Origin Biomed and NSBI here: Part 1, Part 2, Part 3.

But it’s telling that a lone pharmacist in Baddeck has a better ethical filter than all the suits and politicians overseeing NSBI.

Lohr, in particular, has been running a campaign full of tough-on-crime and nativist dog whistles.

It can happen here.

I’ve been trying to improve processes here at the Examiner such that I can return to publishing a regular business round-up. I’m getting there, and that should again be a recurring feature soon.

Part of that will be a periodic look at recent ACOA grants and loans. Yesterday, I started working on the financing agreements from May. This list isn’t exhaustive — I’m still working on it, and I’m concentrating mostly on grants to Halifax-area businesses and other grants I find particularly noteworthy. But so far, here’s what I have:

Alentic Microscience — a $500,000 loan to Alentic Microscience, whose president is Alan Fine, a Dalhousie researcher who has developed a “Lensless microscopy” product — “a rugged, pocket-sized device that combines high resolution imaging with lab-on-a-chip diagnostics to enable rapid, more accurate analysis of samples.”

Beyond Food — a $500,000 loan to “implement marketing plan” and a $50,000 grant to “engage consultants to help set up a dry goods packaging line.” Beyond Food’s president is Darren Burke, a former “elite athlete” and prof at St. FX who started RIVALUS, Inc, a company that sells supplements to athletes and was purchased by the U.S.-based NUTRIVO in 2013. Beyond Food produces “sustainable nutrition products” that supposedly “improve health, performance and the environment” and ostensibly uses “a proprietary process [through which] we develop unique natural health supplements from fresh fruits and vegetables.”

I dunno, is ACOA entering into NSBI-style quackery?

BlueLight Analytics — a $50,000 grant towards $66,667 to “hire a vice-president of business development.” BlueLight “was founded out of Dalhousie University in 2009 with the purpose of building technologies that would improve light curing outcomes globally and promote value-based care in dentistry.” Its CEO is JP Furey, a former KPMG manager who for a while was the CFO at CarbonCure. 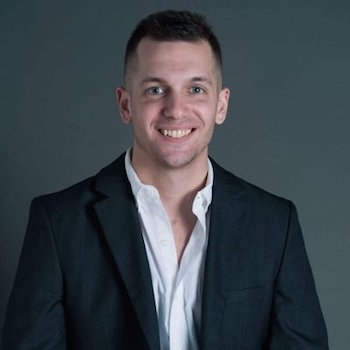 David Howe has both clean teeth and a nice haircut.

Cribcut — a $50,000 loan to “hire [a] full-time technical expertise and undertake commercialization activities.”

“We’ve built a software-enabled marketplace that allows any hairstylist in the world to operate their own mobile hair business,” says Cribcut president David Howe in an email. “Essentially we are a mobile hair salon! Our stylists travel to clients homes and offices for hair services. Some people call us the ‘Uber of haircuts.'”

Howe got his entrepreneurship start with something called ToothbrushSubscriptions.com, which I’m assuming is the “Uber of toothbrushes.” I wonder how many other personal care items need Ubers.

Craft Council of Newfoundland and Labrador — a $15,000 grant to “build awareness and develop the market for seal products.”

Guild Software — a $50,000 grant to “engage software development exercise.” Guild was founded by Colin Gourlay, who is the son of Jim Gourlay, the founder of Saltscapes magazine. According to Peter Moreira:

Guild has developed administrative software for the association management industry and has already found clients in the space. Specifically, it targets professional colleges, which are the organizations that oversee the credentials and membership of licensed professions. An example would be the College of Physicians and Surgeons of Nova Scotia — if you want to practise this profession, you have to be a member in good standing of the group.

These organizations have a problem. It’s hard to administer all the data that they’re responsible for. What Guild software does is provide cloud-based software that allows the simple collection, distribution and updating of that data.

I have questions about where exactly “the cloud” is, and who has access to it…

These grants are ringing alarm bells all over the Halifax Examiner office (which this morning is my kitchen table). That’s because, as Jennifer Henderson reported in a November article, “What’s going on with LED Roadway Lighting?,” “the company has received at least $22 million in public money, but no one will tell the public what the status of the company is.” Wrote Henderson:

The layoffs in June appeared to take former Business Minister Mark Furey by surprise. He blurted that he knew of some discussion of a possible change of ownership, but was unaware of the decision to downsize the company.

“These are unfortunate circumstances,” said Furey. “We do have to respect the business entity. But at the same time, we have a financial interest and obligation to taxpayers.”

LED Roadway CEO Peter Conlon publicly denied the company was about to change hands. But he did acknowledge LED was “open for additional investment” from potential partners.

That was in June. Efforts by this reporter to follow-up with the company and NSBI about whether LED (a) continues to seek outside investors, or (b) is setting up assembly facilities outside Canada have met with resounding silence. So have questions about whether more layoffs are likely now that, according to HRM spokesperson Brendan Elliott, the Halifax streetlighting conversion is 95 per cent complete.

The Registry of Joint Stock Companies shows that there was a change in directors at LED on May 22. LED founder Chuck Cartmill is now listed as president and CEO, but former CEO Peter Conlon is now absent from the registry.

As you can see, I’ve only gotten as far as “L” on the ACOA list.

I’ve been unable to understand complaints from some people living in the Cape Breton Municipality about equalization. As Parker Donham points out, they seem to be confusing two different programs — the federal equalization payments to provinces, and our provincial government’s equalization payments to municipalities and towns. Both transfers have the word “equalization” in them, but they are separate and distinct programs, albeit the province’s payment to municipalities is a subset of the money it receives from the federal government.

In any event, the province yesterday published the equalization amounts it paid municipalities and towns this year, and sets those payments out in a table going back to 2007. The page explains that:

Equalization is a legislated unconditional operating grant to assist municipalities whose costs of delivering a core set of services exceed their ability to pay, when compared to similar municipalities. In addition, towns are provided with a $50,000 Town Foundation Grant as recognition of the particular challenges they face due to local road responsibilities and assessment bases.

The Municipal Grants Act (S.8, s.19A) provides for the payment of the Equalization Grant and the Town Foundation Grant, which are in the form of unconditinal transfers.

This year, the amounts of the grants and transfers were established by an order in council on March 29.

Find all the figures here.

Related (barely), the province has also for the first time published its Municipal Fiscal Statistics — “Thirteen financial condition indicators are produced by the Department which provide a general picture of a municipality’s financial condition,” including:

I’ll leave it for people smarter than me to say whether these stats are meaningful, and if they are, just how meaningful.

Community Design Advisory Committee (Wednesday, 11:30am, City Hall) — all about the Centre Plan; if you’re gullible enough to believe the Plan won’t be grandfathered, exempted, and ignored into meaninglessness, you should totally spend your precious time and go to this meeting instead of, I dunno, flossing your teeth or alphabetizing your spice cabinet.

Investment Policy Advisory Committee (Wednesday, 12pm, City Hall) — there are no action items on the agenda, but we’re told that Halifax Water wants to start attending the IPAC meetings. 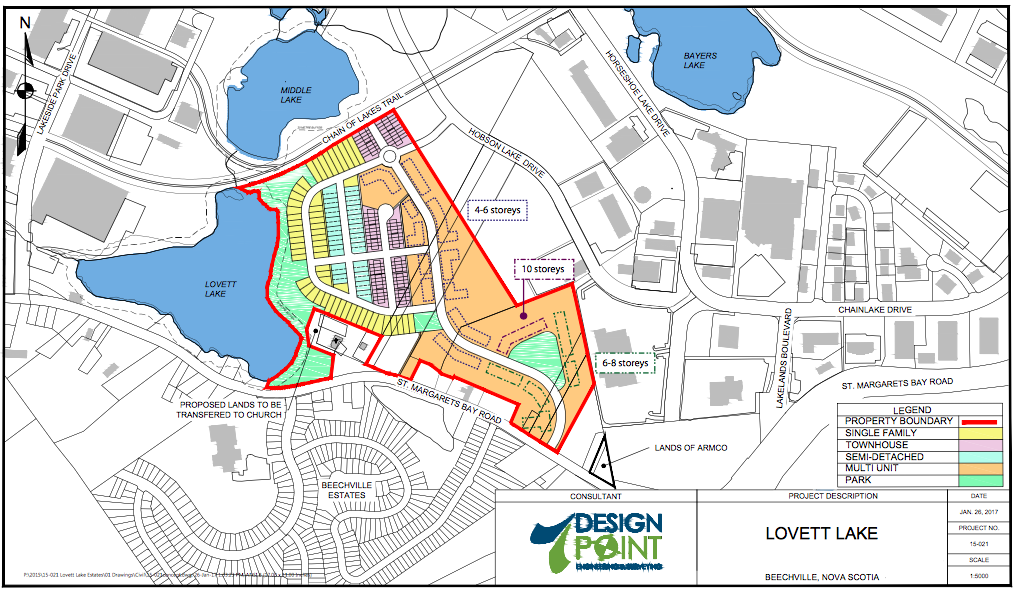 North West Planning Advisory Committee (Wednesday, 7pm, BMO Centre, Bedford) — Oceanstone Seaside Resort is up for discussion. Near as I can tell, the whole thing was built in contradiction to zoning rules, and now they want to make it compliant so they can expand it.

Public Information Meeting – Case 21288 (Wednesday, 7pm, Maritime Hall, Halifax Forum) — WM Fares wants to build a 17-storey building on Robie and Macara, and there are so many of these buildings proposed for Robie Street I’ve lost track of them all. The words “Centre Plan” don’t appear on the meeting announcement because who are we kidding?

Public Accounts (Wednesday, 9am, Legislative Chamber, Province House) — Bernie Miller, the deputy minister at the Department of Business, will be asked about the “Rural Internet Middle Mile Project.”

I don’t have a copyeditor this morning. Please be kind.