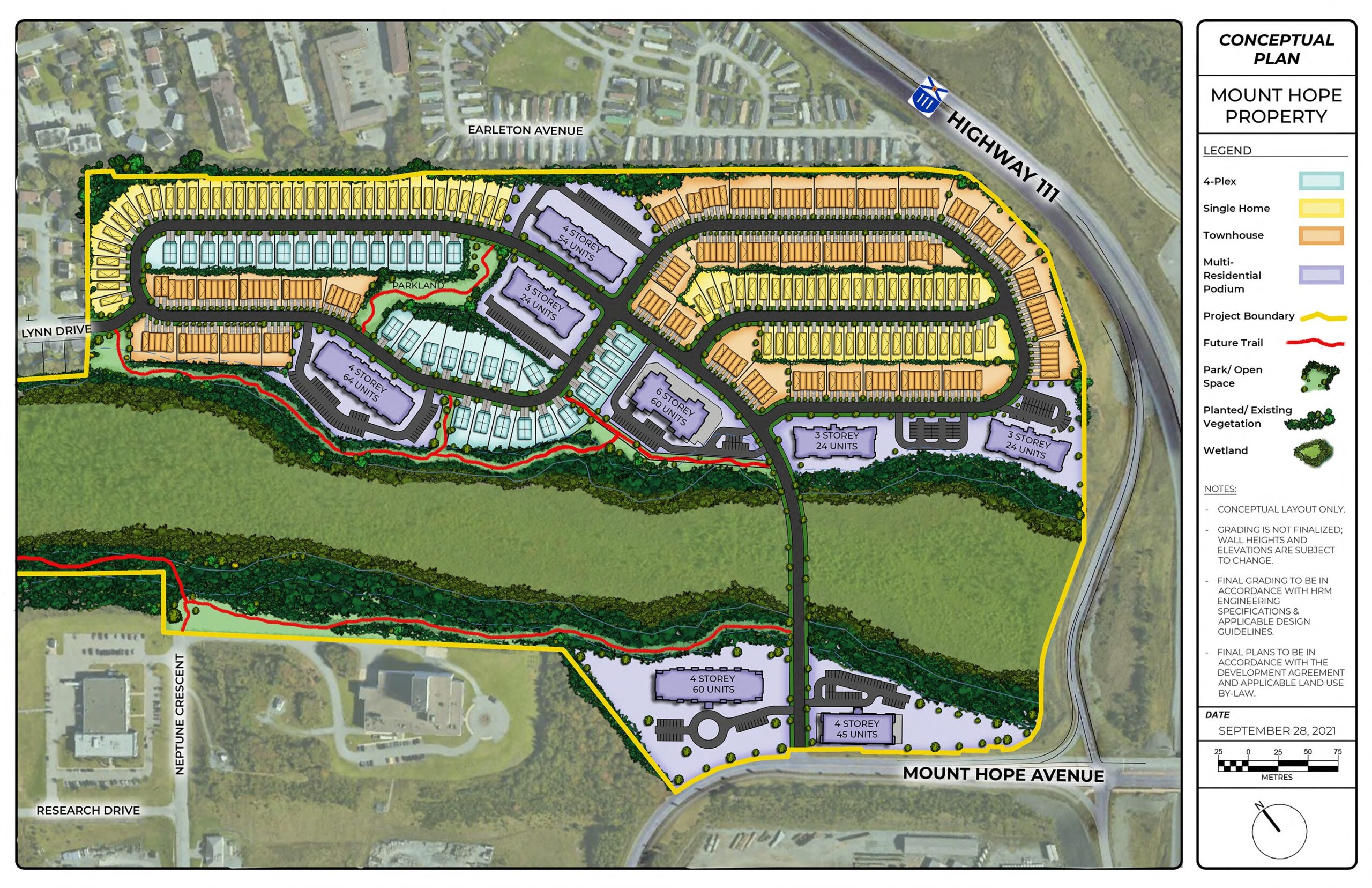 At a news conference Monday, Municipal Affairs and Housing Minister John Lohr announced the province is spending $21.8 million for the development of 373 affordable housing units in the Mount Hope area of Dartmouth.

The affordable units will be rented for 60% to 80% of the area’s average market rent, and part of a larger community of 875 apartments, townhouses, and fourplexes that will be developed on the south Dartmouth site. Tenants with extremely low incomes will also be able to apply for rent supplements to further subsidize the cost. The average rent supplement is $350.

“We’ve always said that the answer to the housing crisis we are facing is increasing the overall housing supply, as well as the number of affordable units,” Lohr told reporters Monday. “Mount Hope project offers both.”

The $21.8 million will be paid to Clayton Developments as a forgivable loan, and is the last of the $35 million the province had set aside for 1,100 new affordable housing units.

“We think the private sector needs to come to the table to help adjust affordable housing,” said Kevin Neat, vice-president of planning and development for Clayton Developments, who spoke to media with Minister Lohr Monday. “And this is our way, the first step of hopefully many steps to go and help address these problems of affordable housing.”

However, the developer only has to rent out the 373 units at the affordable rate for 20 years. After that, assuming the requirements are met, the province will forgive the loan and Clayton Developments will be allowed to rent all 875 units as the market dictates. Construction will begin in the fall and the first units are expected to be ready a year after that, so the deal guarantees affordable housing for less than two decades. And should market prices further inflate, 60% of market value could get a lot less affordable. The average rent for Dartmouth south went up almost $100/month between 2020 and 2021, according to the Canada Mortgage and Housing Corporation.

Despite the short shelf life, the announced units are arguably the first to come from the $35 million fund that could be called truly “affordable.” The Mount Hope units aren’t priced yet, but a one-bedroom apartment could rent as low as $605/month, while a two-bedroom could rent as low as $788/month. The general definition of affordable housing is 30% of a person’s gross income, meaning these announced units are affordable for someone working 40 hours a week for the current minimum wage. A similar affordable housing announcement in November, paid for by the same $35 million provincial fund, priced one bedroom units in Halifax above $1,000/month.

Mount Hope is one of nine “special planning areas” announced by the province Friday, on which Lohr can now immediately approve developments in order to fast track new housing. On Friday, provincial NDP leader Gary Burrill said he was concerned the new special planning areas were promising the development of 22,600 new units without guaranteeing any of it would be affordable. Monday’s announcement is the first to promise affordable units will be developed on at least one of the nine sites.

Lohr said the province’s focus remains on increasing the housing stock in the private market to relieve high prices, but announced the province will spend an additional $916,000 on grants for nearly 20 community housing organizations across the province — like the Affordable Housing Association of Nova Scotia (AHANS) and the Cape Breton Community Housing Association — to address housing needs further than the invisible hand can.

“The $916,000 is the intention there: that you’re going to work with these groups so that they can develop the the non-market, housing co-op, housing approach we’ve heard called for by some folks,” Lohr said.

AHANS, for instance, is already using a mix of provincial and federal funding to convert an old hotel into a “deeply affordable” housing complex with support services for 65 future tenants.

The Community Housing Capacity Building Program is jointly funded through the Canada-Nova Scotia Bilateral Agreement under the National Housing Strategy.

Concerns about environmental impact of development and “special planning areas”

The Mount Hope development will be built in one of the nine “special planning areas” the province announced Friday  —  areas where Lohr can fast track development approvals in the interest of increasing housing stock. Clayton Developments is fully or partly developing six of the nine areas, including Mount Hope. That land is located near the Woodside ferry terminal and the Circumferential Highway.

“This is a great area for affordable housing,” Lohr said Monday. “It has municipal services. It’s close to public transit. Residents can easily get to shops and services. There are multi-use trails nearby. These are all important things to consider. We want Nova Scotians to have choices in affordable housing, and I’m sure this area will be a very attractive community for many.”

Foregoing red tape to build much-needed housing as fast as possible might seem like an obvious step in the right direction, but some are concerned.

The Ecology Action Centre (EAC) put out a media release Monday that pushed back against frictionless development approvals. While acknowledging the “legitimate need for new housing,” the EAC is worried the lack of public input or consideration of existing strategies, like the Halifax Green Network Plan, could lead to quick approvals for environmentally harmful developments with little chance for pushback.

“Planning for development of the Sandy Lake site should not be approved until existing studies are completed. This area is identified as critical in the Halifax Green Network Plan and needs to be protected, not developed. Furthermore, the Bedford West Subarea 12 lands are an important wilderness corridor between Sandy Lake and Blue Mountain-Birch Cove Lakes and the Southdale lands are adjacent to the valuable Eisner Cove Wetland.”

The Eisner Cove Wetland is snug against the announced development at Hope Mountain. Before Monday’s announcement, it had been subject to public consultation that saw significant concern from the community, as the Examiner reported in February. 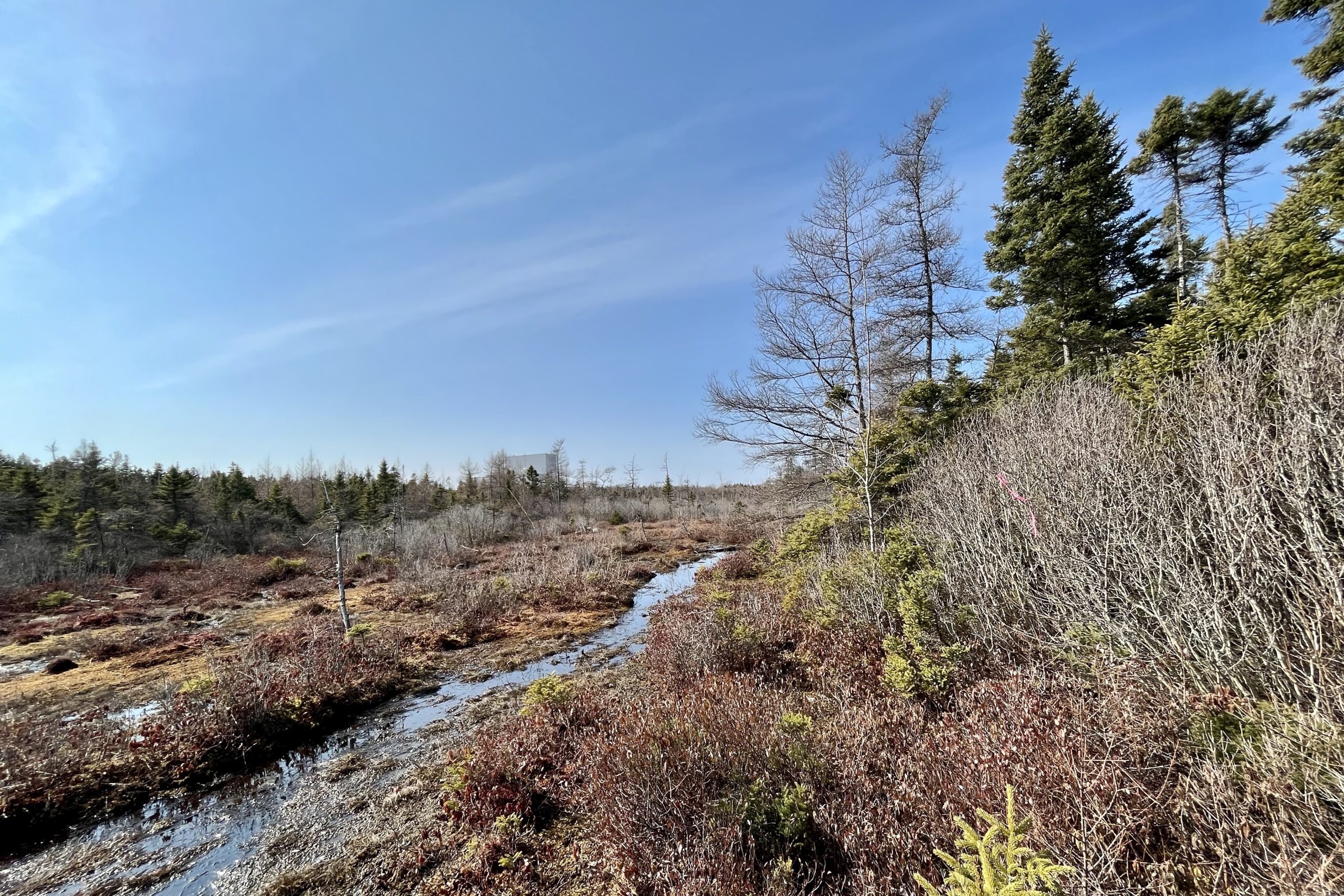 Bill Zebedee, a local resident and member of Save Our Southdale Wetland (formerly Protect Eisner Cove Wetland Society) told the Examiner the wetland stores a significant amount of carbon and is home to a range of wildlife, including foxes, deer, and otters. He said he’s concerned the affordable housing announcement will expire in 20 years, and the province could be sacrificing the largest natural green space in Dartmouth for a housing development that will soon become unaffordable anyway. He’s also worried about the effects of an overpass that could need to be built to connect the new development to Highway 111.

“The wetland’s a beautiful spot,” said Zebedee in a phone interview. “I’ve taken a lot of people through there and they love it. It’s nice to have the one of the largest green spaces left in Dartmouth, within a 20-25 minute walk from downtown. It’s just beautiful. To lose that … is quite concerning.”