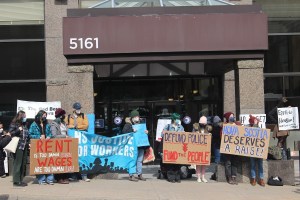 Dozens of demonstrators gathered outside the Nova Scotia legislature Thursday to demand the provincial government do more to address poverty and housing gaps.

Protestors at the rally, which was scheduled for the first day of the Nova Scotia legislature’s spring sitting, called on the province to increase its minimum wage, address the lack of affordable housing in the province, and strengthen protections for tenants.

A variety of organizations planned the rally. Some of the groups, like ACORN and P.A.D.S. Community Network, advocate directly for tenants’ rights and affordable housing in the province. Others advocate for better living conditions for low-wage workers, migrant workers, and people with disabilities.

Rachelle Sauvé, spokesperson for P.A.D.S. Community Network, said the organizations wanted to make it clear issues relating to poverty and housing were widespread in the province, and the provincial government would have to make changes to everything from housing stock to social support programs to make an improvement.

“It’s the first day of the sitting legislature, and a lot of us are quite concerned by what isn’t in the predicted plan for the year,” Sauvé said in an interview. “[P.A.D.S. is] quite concerned that there’s really nothing about housing in the plans that are going forward. We thought we would combine forces with other folks who were looking at wage increases and all the other pieces of the puzzle to make a stand and say it’s time for an anti-poverty agenda.”

P.A.D.S. had held a similar rally on November 28, three weeks after the Nova Scotia legislature concluded its fall sitting, when protesters gathered outside Province House to request the provincial government call an emergency session to deal with the housing crisis. Thursday was the first day the legislature has convened since then. 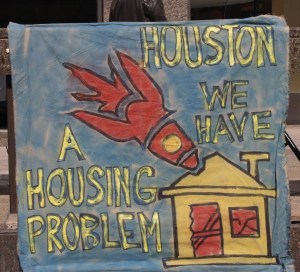 A sign outside Province House on Thursday. Protestors called for solutions to the province’s housing crisis. Photo: Leslie Amminson

Lack of affordable housing in the province has been a persistent concern since before the start of the pandemic. In Halifax, the vacancy rate currently sits at 1%; that’s down from 1.9 per cent in 2020.

The province has taken some measures to address the problem. In October 2021, Premier Tim Houston’s Progressive Conservative government announced Nova Scotia’s current rent control measures would remain in place until December 31, 2023. Those measures limit residential rent increases to 2% per year.

But since the lifting of Nova Scotia’s state of emergency, which lasted almost two years through the COVID-19 pandemic, some emergency protections for tenants are no longer in place.

Landlords can now evict tenants if they plan to do renovations to their property, a practice that has become known as “renoviction.” This had been banned under the provincial state of emergency.

Hannah Wood spoke at Thursday’s rally on behalf of the Nova Scotia chapter of ACORN, a tenancy union advocating for low- and moderate-income people in Canada. Wood said implementing temporary rent control was a step in the right direction, but she’s worried about what’s coming now that the province has lifted the state of emergency.

“[Rent control] definitely saved hundreds of people from homelessness,” Wood said in an interview. “But [the province has] already started to roll back elements of it, so that less people are protected.”

Wood added that protections against renovictions still remain; landlords are now required to give tenants more notice prior to eviction or provide financial compensation. But Wood believes the Residential Tenancies Act should also require landlords to prove they have plans to renovate the property. 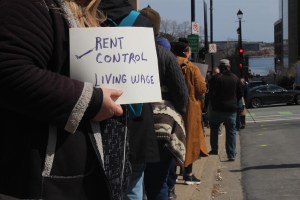 Premier Houston has said he doesn’t believe rent control is a long-term solution to the province’s housing crisis. Instead, he’s said adding to the housing stock would be necessary to increase affordability.

“Tim Houston’s government has been very firm that they believe there’s a market solution to this problem, and that we can build our way out of it,” Wood said. “But there is no proof in the pudding.”

Wood said she’s seen some new apartments become available to renters in the province, but the prices per unit have remained high. Currently, the average price of a one-bedroom apartment in Halifax is upwards of $1,600 per month, according to a recent report.

In January, the Examiner reported Nova Scotia’s shelter system had become stagnant due to a lack of available affordable housing in the province.

ACORN is also advocating for landlord licensing in Nova Scotia, which would require landlords to register with the province and have their properties inspected on a yearly basis. There would be fines for landlords whose apartments are found to be in disrepair.

In an emailed statement to the Examiner, Krista Higdon, spokesperson for the Department of Municipal Affairs and Housing, said the province is taking steps to increase the supply of affordable housing in Nova Scotia.

Higdon noted that in October 2021, the provincial government committed $35 million to increase the availability of affordable housing. That money would be put towards 425 new rent supplements and 1,100 new affordable housing units, as the Examiner reported in October.

Higdon also said the province is creating an inventory of “vacant or under-utilized public land suitable for residential use.” The province will assess how quickly that land can be ready, prioritizing areas most in need of new affordable housing. 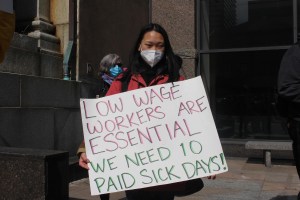 But increasing the availability of affordable housing, advocates say, is only one piece of the puzzle.

Suzanne MacNeil, spokesperson for Justice for Workers, one of the organizations behind Thursday’s rally, said issues like low wages for workers and insufficient housing had been problems in Nova Scotia since before the pandemic began in March 2020. To deal with these problems, she said, the province would have to take a range of actions into account.

Justice for Workers is advocating for a $20 an hour minimum wage in Nova Scotia and 10 paid sick days for workers annually. In November 2021, a report from the Canadian Centre for Policy Alternatives estimated Halifax’s living wage at $22.05 an hour.

“The issues around workers’ wages and working conditions, around housing, tenants’ rights and homelessness, and around poverty — they’re all connected,” MacNeil said.