You are here: Home / Education / Protesters call for removal of NSCAD board, reinstatement of fired president

Dozens of people gathered in Granville Mall on Thursday to call for the removal of NSCAD’s board of governors and the reinstatement of its former president.

Former NSCAD president Dr. Aoife Mac Namara was fired without a publicly-stated reason (“personnel matters”) in late June after less than a year in the role. In that short time, Mac Namara made an impression on students and faculty alike with her work around diversity and inclusion.

“We had, for the first time, a president who actually cared,” African Nova Scotian former NSCAD student Jade Peek said during Thursday’s rally. 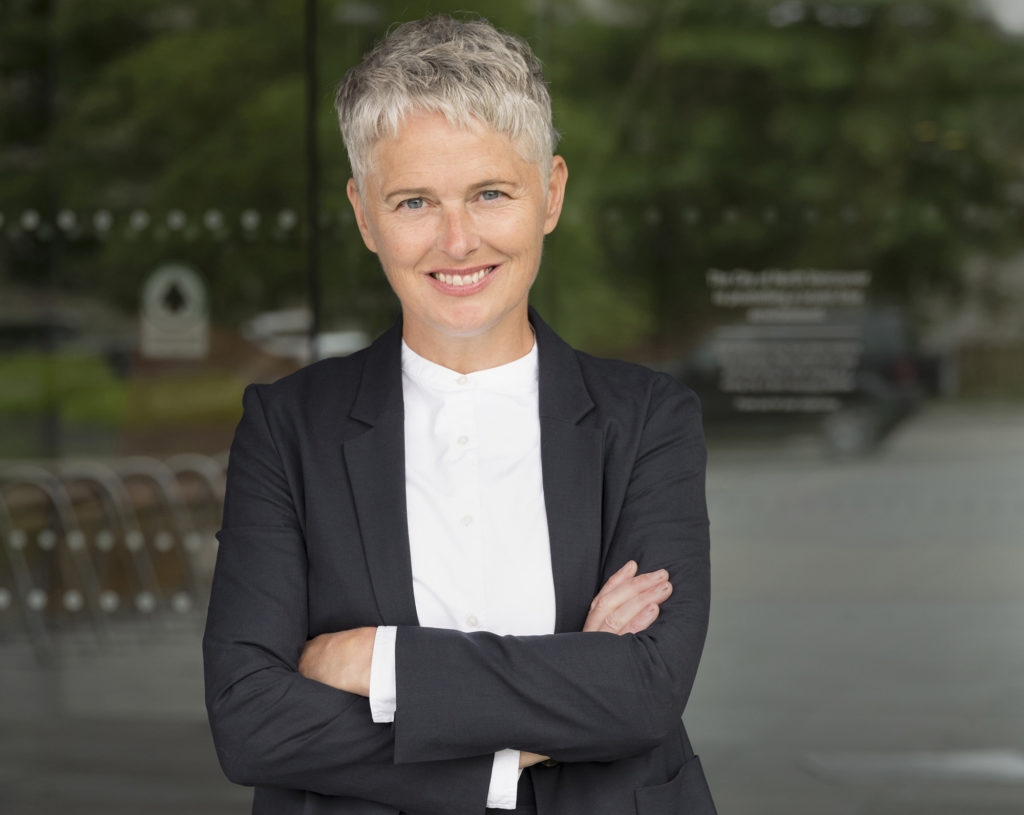 Calling in from Ottawa through a loudspeaker outside NSCAD’s Granville campus, Peek said Mac Namara was committed to addressing systemic racism at the school experienced by Black, Indigenous and people of colour (BIPOC) students. Peek also cited issues of prohibitively-high tuition pushing out BIPOC students, and said Mac Namara was hearing those concerns. Peek recently published an essay detailing the issues at NSCAD in Canadian Art Magazine.

“Bring back the president that we all want and we all need,” Peek said.

Wilma Needham, a NSCAD alumnus and former professor, was impressed with Mac Namara too.

“She seemed like the kind of person who wasn’t all about herself, but was about researching the community — which I don’t find board members do,” Needham said.

“She seemed so good and we’ve been waiting so long for a president of this stature so this was hugely disappointing to all of us, students and faculty,” Woods said. 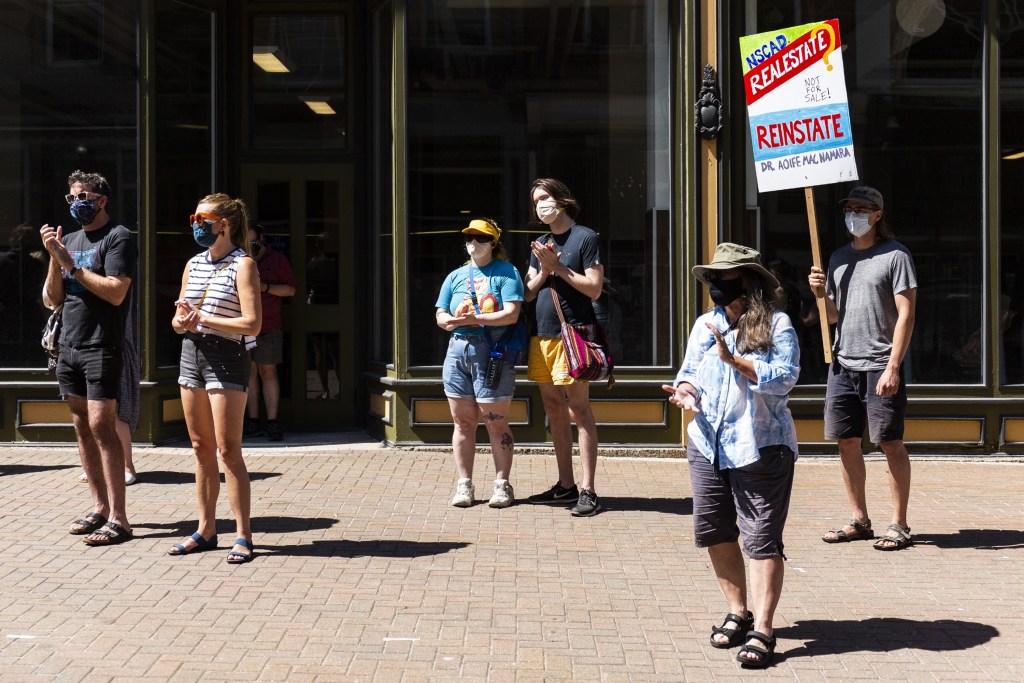 Dozens of people at the socially-distanced, mask-mandatory rally called for Mac Namara to be reinstated. Photo: Zane Woodford

It’s a commonly-held impression of Mac Namara, but clearly not one held by NSCAD’s board of governors.

As the Halifax Examiner reported after she was fired, “Mac Namara stepped right into the closed and opaque circle that constitutes Nova Scotia’s managerial and real estate network.”

You’ll recall that NSCAD was nearly bankrupted a few years ago by an ill-conceived purchase of property at the port. Ever since, the Board of Governors has been especially focused on real estate — there was the potential to relocate the Granville campus to the waterfront in a joint project with the Art Gallery of Nova Scotia, but for unknown (to me) reasons, that idea fell through, and now the AGNS is going solo with the waterfront project.

In the 1970s, the university moved from Coburg Road to downtown by purchasing the eastern half of the Granville Street portion of the Historic Properties developed by Ben McCrea, owner of the Armour Group. That sale included a provision that should the university ever sell the property, Armour Group would have first rights of refusal.

Fast forward to the present day. Ben McCrea died some years ago, and Armour is now controlled by his son, Scott McCrea. Saint Mary’s University awarded him an honorary degree last year. In addition to the Historic Properties, the Armour Group owns the Waterside, Founders Square, and the dog-awful Queen’s Marque project now blighting the waterfront.

And NSCAD’s Granville campus could join that real estate portfolio. McCrea has made some sort of offer to the university for the property. Does this make sense? Maybe. As the adjacent Cogswell redevelopment project is about to commence, now might be an opportune time to unload the property to a developer.

The problem, I’m told, is that as Mac Namara saw it, the potential sale of the Granville campus was tied up with conflicts of interest on the Board of Governors. In particular, vice chair Sean Kelly is a lawyer with Stewart McKelvey, where he represents the Armour Group.

I’ll leave it for others to decide if that’s a substantial conflict, but regardless, Mac Namara has been working on a governance review of the board, with the aim of directly addressing potential conflicts of interest and of having the board better reflect the community, especially in terms of its diversity.

The dozens of people who came out on Thursday are calling on the board to reinstate Mac Namara and the provincial government to break up and replace the board.

“Not only do we need to fire the board, but we need to replace how the board is run. The provincial government needs to know how to do more efficient oversight,” Peek said. 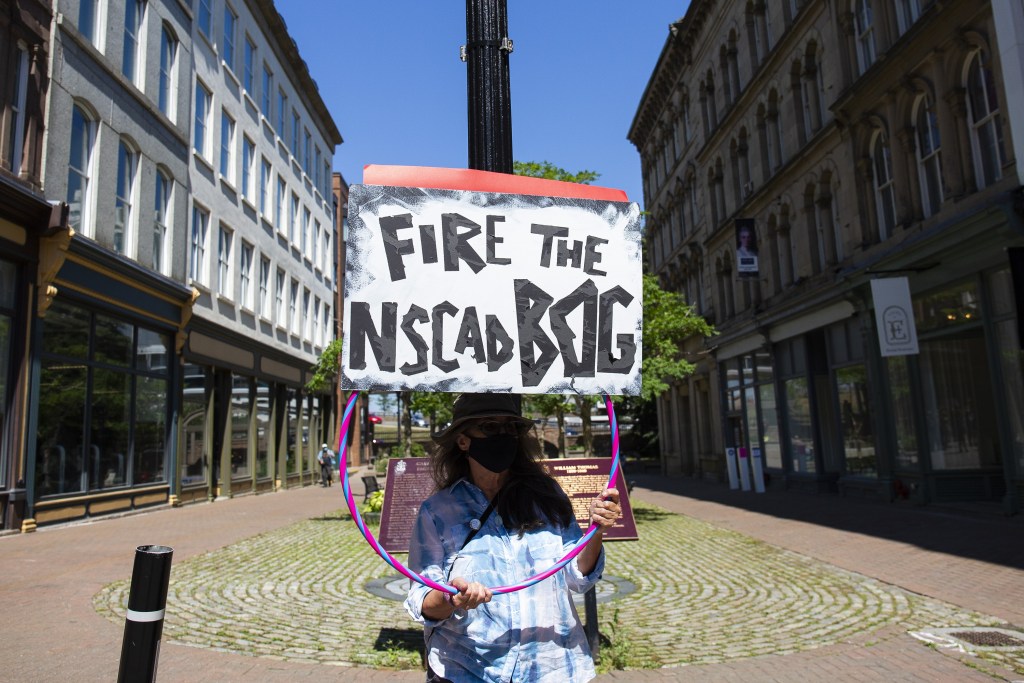 Signs and chants called on the government to fire the NSCAD board of governors. Photo: Zane Woodford

Specifically, the group that organized Thursday’s rally, Friends of NSCAD, is calling on the provincial government to remove all governors in council from the board, along with other members excluding alumni and elected student and faculty representatives.

Replacing them, Friends of NSCAD wants a third of the 22-person board to be BIPOC members and a quarter to be people who are truly involved in Halifax’s arts community.

Friends of NSCAD has organized a letter writing campaign targeting the chair of the board, Louise Anne-Comeau, Labour and Advanced Education Minister Labi Kousoulis, and MLAs.

Sadie Richards, a furloughed NSCAD staff member who made it clear she speaks for herself and not on behalf of NSCAD, said she’s concerned about that possible conflict of interest and about Mac Namara’s firing.

The union representing staff and faculty, FUNSCAD, voted 96% in favour of a motion of non-confidence in the board last month. Protesters chanted on Thursday, “96% non-confidence? That’s a sign of incompetence.”

Richard said she’s received “chilling indicators” from the administration, making it sound as though they’re not authorized to speak to the media. Richards said she’s speaking out because she doesn’t have a family to support.

“No one is depending on me, so I have the privilege of being able to lose this job if I have to in order to say what I think is wrong here,” she said.

“The governors in council of the NSCAD board have absolutely broken fiduciary duty, and the Minister of Advanced Education Labi Kousoulis absolutely needs to step in and remove them … They do not represent our community. They’re not artists. They’re business people.”

In a message to the NSCAD community and FAQ posted on Wednesday, the board doubled down on its refusal to say why Mac Namara was let go, citing “confidential personnel matters.” The board is not considering reinstating Mac Namara, it said.

“As a governing Board, we understand there may be outstanding questions around the recent leadership transition. We are striving to be as transparent as possible, while respecting legal obligations and the privacy of the former President. The Board recognizes the contributions made by Dr. Mac Namara during her time as President.”

The board denies any possibility of a conflict on interest around the development of the Granville campus, but has “nonetheless undertaken an external review of policies to ensure alignment with best practices in the post-secondary landscape.”

It said it’s also “making changes to its own appointment process to provide greater transparency and ensure that it is reaching as many diverse voices and perspectives and engaging with as many constituencies as possible with respect to Board openings and opportunities.”

For Peek, those kinds of changes have been too long coming.

“I didn’t know what a starving artist meant until I went to NSCAD, and let me tell you, everybody is starving for change,” Peek said.

“We really need to look at what our institution means and what it has always been here for. And it is around critical thought and critical education, and it is specifically around the exploration of art practice in any form and any way in which we do it … While some people might want to go to NSCAD to paint pictures of Peggy’s Cove, I went to NSCAD so I could make art to get shit done.”