HALIFAX – Students at NSCAD University are occupying the office of President Dianne Taylor-Gearing to protest a planned 37% tuition fee hike. This fee increase would see NSCAD students’ tuition fees increased to $8700 per year by 2018, leaving NSCAD with the highest undergraduate tuition fees in Nova Scotia and the most expensive bachelor of fine arts program in Canada.

Dozens of students are delivering drop out forms to President Taylor-Gearing today, which indicate that they will not continue their studies at NSCAD if this tuition fee hike passes. Enrolment at NSCAD has already dropped by 15.5 percent this fall, the fastest decreasing rate in the province.

“We are calling on the President Taylor-Gearing and the Board of Governors to reject this massive tuition fee hike,” said Jade Peek, Vice President External of the Students’ Union for NSCAD University. “Enough is enough, our students cannot afford this hike.”

Students and the general public are barred from the NSCAD Board of Governors’ tuition fee vote being held by secret teleconference today. “The Board is too ashamed to hold this vote in one of our on campus board rooms, where they would once again have to face the students who would be impacted by this fee hike,” said Peek.

NSCAD students are once again calling on the Board of Governors to take an alternative approach and work together with students and faculty in in lobbying the Nova Scotia government for increased public funding for post-secondary education.

The sit-in was continuing well into the evening, reports CTV.

Both were public-private ventures that garnered the support of former Prime Minister Stephen Harper’s Conservative government.

Now, it appears, both are merely private endeavours if they go forward at all.

I think this probably means both proposals are dead in the water, but we should probably keep heaping ridicule on them until we know for sure.

“A popular Dartmouth cafe and catering service sponsored by the Elizabeth Fry Society of Mainland Nova Scotia will close next month because the province can no longer provide funding,” reports the Chronicle Herald’s Mary Ellen MacIntyre: 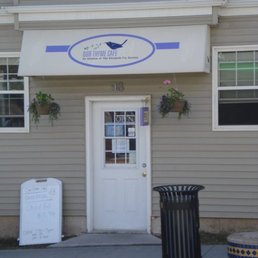 Our Thyme Cafe and Catering serves as an education and employment program for women facing homelessness, who have been involved with the criminal justice system or who have issues relating to poverty.

In a statement late Thursday, the Labour and Advanced Education Department acknowledged the enterprise was funded under the federal government’s Canada Job Fund Agreements and there is simply less federal funding for employability projects.

Chrissy Matheson, spokesman for the Labour and Advanced Education Department, would not disclose how much funding the enterprise had traditionally received from the province.

Public Accounts records show that Labour and Advanced Education paid the Elizabeth Fry Society $108,000 in the 2014-15 fiscal year and $178,491.48 the year before. It’s not clear if those payments were exclusively for the operation of the cafe.

There should of course be periodic cost-benefit analyses of such operations, but we should bear in mind the huge societal costs of recidivism. If even one woman can be kept out of the justice system, it’s probably well worth the money spent on the cafe.

Halifax police raided Farm Assists yesterday. The store sells marijuana to people who have medical marijuana licences, sells legal cannabis products to the general public, and has a vapour lounge. 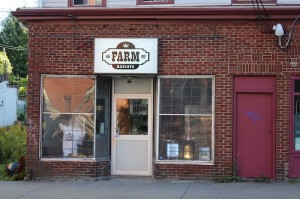 “[The raid] was in response to a public complaint that we received, and we had a duty to investigate,” police spokesperson Dianne Woodworth told the Chronicle Herald.

This is ridiculous. A few potheads in the back of what would otherwise be an empty building aren’t hurting anyone. And we just had a federal election where the victorious party pledged to legalize marijuana, so in the public’s mind the issue is settled.

Such raids are an enormous amount of police time and money — surveillance, preparing the search warrant documents, conducting the raid itself, then the followup court time for the officers. This time and money could be far better used to actual good in the community.

The city this morning issued a tender for naming rights to the Canada Games Centre.

It’s cute and all, but the send-a-tree-to-Boston thing has nothing to do with “thanking” Boston for anything, and everything to do with the promotion of tourism and the Christmas tree industry. After the initial tree in 1918, the “tradition” didn’t start until 1971, after most people in both cities who had experienced the Explosion were long dead.

Don’t get me wrong; there’s value in tourism promotion, and Boston is a nice town. But let’s not get too smug about this.

And besides that, it’s worth pointing out that Premier Stephen McNeil is in Boston to light the tree, and not in Paris to save the world. He’s made clear his priorities. 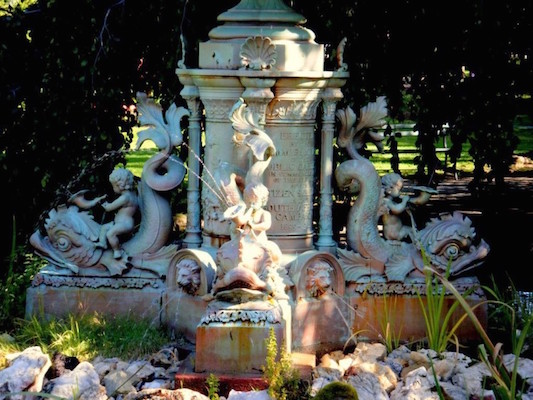 The base of the Boer War Memorial. Photo: Stephen Archibald

A while back I went on and on about Canada’s shameful involvement in the Boer War, and noted that there are not one, but two, Boer War Memorials in Halifax. The first is outside Province House; the second, I wrote, “is a ridiculous ornate fountain erected in the Public Gardens, and the less said about that the better.”

Well, Stephen Archibald has more to say about that. And it proves to be even more ridiculous than I thought. The memorial, explains Archibald, is a product of the Walter Macfarlane ironworks in Glasgow, Scotland:

From a distance the 1903 fountain looks suitably restrained, topped with a figure representing the “citizen soldiers” who fought in the Boer War, 1899 – 1902. Get closer and you realize there is a lot of strangeness happening on the lower levels.

Babies blowing horns and riding dolphins. Lions spraying water in three directions. A long eared squirrel nibbling an acorn. Another youngster with a bell flower hat sailing in a boat made of a big leaf. [photos of each at the link]

These figures, of course, have no connection with the incredibly cruel war fought in South Africa. That’s because  Macfarlane had been selling the bottom part of the fountain for about 15 years before the idea of a war memorial came up…

It appears that the Gardens Committee selected the fountain base and then sent photos to Macfarlane of a soldier in the pose they wanted sculpted. The model is said to be Billy Pickering, the most talented Nova Scotian athlete of his day… before he died in 1952, Billy Pickering spent time in Camphill Veterans Hospital and would often wander over to the Gardens. People said he was the only Canadian who walked by his own memorial every day.

2. Segways on the roads

Lezlie Lowe is for them.

3. Cranky letters of the day

Seeing that Segways are going to be allowed on our streets and roads, I wonder if they will have to be registered and insured. Electric scooters are allowed on roads without any restrictions at all. Yet for me to take my ATV to my hunting camp through the woods, it costs $50 for registration and $140 for insurance annually. There is just no common sense in many of our government’s rules and regulations.

I was surprised to see that our provincial government is allowing Segways on our streets, sidewalks and roads. Attention to the condition of our roads should be paramount as well. Imagine hitting one of those potholes with a Segway.

They should also consider allowing road-equipped (i.e., lights, directional signals, etc.) electric golf carts. Of course, registration and safety checks should be applied. These changes to the Motor Vehicle Act could take place at the same time as reconsideration of the registration of motorhome fees.

Nova Scotia Business Inc is going to San Francisco in the spring (the perfect time to go to San Francisco, before the cold summer fogs roll in) to the Game Developers Conference, bringing whatever local game developers who can pony up the dough along with them (sorry for the screen shot here; the tender offer isn’t a readable PDF, so apparently bidders with visual impairments aren’t welcome):

On December 5, 1990, Dartmouth city Alderman Gloria McCluskey “requested that the Solicitor review our present by-laws, to see if there is any provision for controlling the raising and keeping of pigeons.”

At the same meeting, Alderman James Connors “asked for assurance that staff are actively pursuing a course of action with CN, toward the resolution of problems with the sounding of train whistles in the downtown area.” 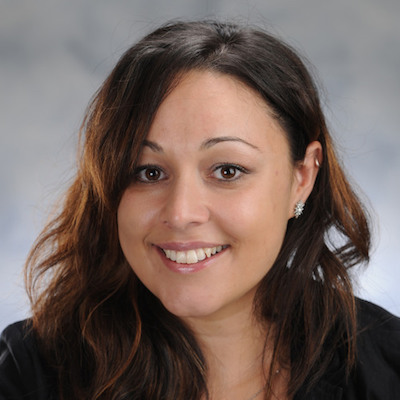 Age (noon, 2017 Marion McCain Building) — Angel Petropanagos, a philosopher and postdoc in the Faculty of Medicine, will speak on “Is age a relational concept?” 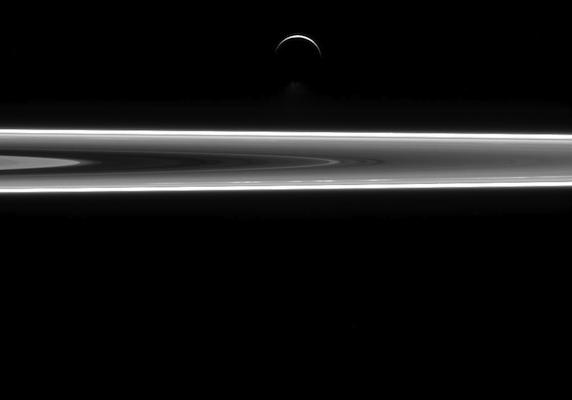 This is Enceladus. Explains NASA:

Saturn’s icy moon Enceladus poses above the gas giant’s icy rings in this Cassini spacecraft image. The dramatic scene was captured on July 29, while Cassini cruised just below the ring plane, its cameras looking back in a nearly sunward direction about 1 million kilometers from the moon’s bright crescent. At 500 kilometers in diameter, Enceladus is a surprisingly active moon though, its remarkable south polar geysers are visible venting beyond a dark southern limb. In fact, data collected during Cassini’s flybys and years of images have recently revealed the presence of a global ocean of liquid water beneath this moon’s icy crust. Demonstrating the tantalizing liquid layer’s global extent, the carefulanalysis indicates surface and core are not rigidly connected, with Enceladus rocking slightly back and forth in its orbit.

That water, and the tiny size of Enceladus, have got people quite interested in the place.

Cassini will bop around Saturn until 2017, when it will be plunged into the planet, scattering its 72 pounds of Plutonium Dioxide to the winds, pissing off the previously non-offensive Saturnians, and starting the First Inter-Planetary War, which will wage for centuries until Micromégas arrives and laughs at us, ushering in a new era of peace and wisdom, or at least comedy. 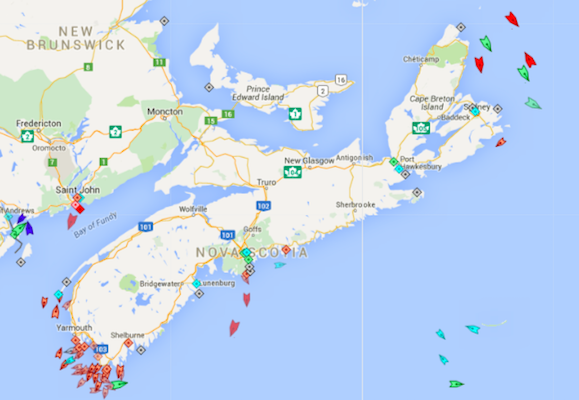 Barkald, bulker, arrived at National Gypsum this morning from Sydney
Dinkeldiep, cargo, Saint-Pierre to Pier 42, then sails back to Saint-Pierre

We’ll be publishing the next Examineradio, which I think is episode #38, later today.