You are here: Home / Commentary / Portapique tragedy: We need a full public inquiry 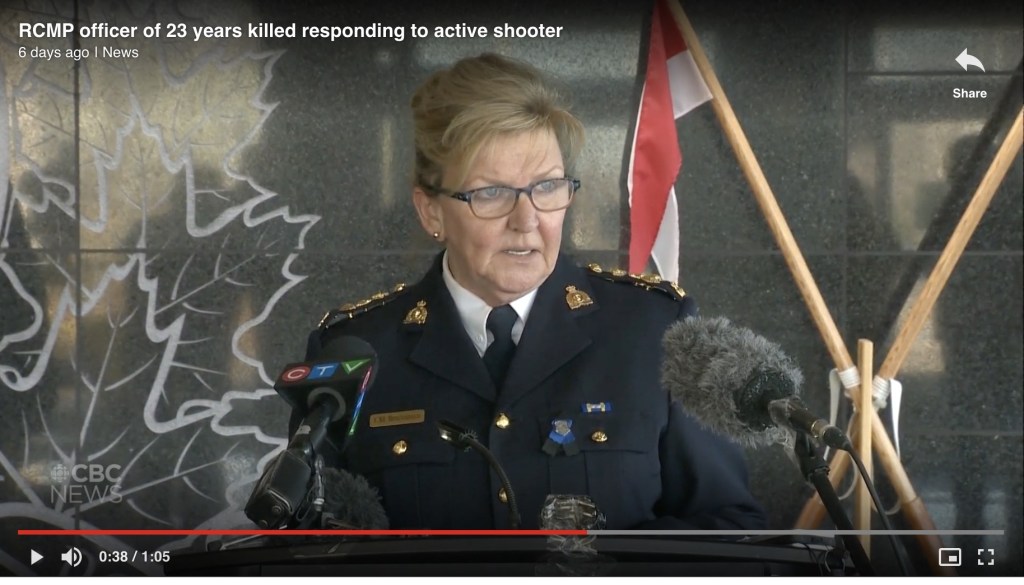 Late on the afternoon of Sunday, April 19, I sat in front of my television waiting for an RCMP briefing I fully expected would help me make sense of the confusing cascade of disjointed, disconcerting, increasingly frightening news bytes and bulletins that had tumbled out and over one another all that day.

I’d woken to a radio news report of an active shooter in Portapique, Nova Scotia. I had to look it up on a map. Police were advising people there to lock their doors and stay inside, the CBC newsreader said. And then the news kept becoming newer, and more bizarre. “Several” victims … The alleged shooter is a Dartmouth denturist … Considered armed and dangerous … He might be driving a car decked out to look like an RCMP vehicle … He might be wearing a facsimile Mountie uniform … Sighted here … Seen there … House fires … Definitely multiple casualties … Police officer shot … Police cars ablaze … Gunman apprehended at the Enfield Big Stop, nearly 100 km from Portapique! … Wait! What? How? … Gunman reported dead … At least one police officer killed …

The RCMP briefing, when it happened, was almost as surreal as the day. Lee Bergerman, the commanding officer of the RCMP in Nova Scotia, began, not by recapping what was known or even indicating how many people had been killed or wounded, but with a heartfelt eulogy for Heidi Stevenson, the 23-year veteran officer and mother of two who’d been killed in the line of duty that day, and she also shared the news that another, then-unnamed officer had been wounded but was recovering and would be supported by his RCMP “family.”

It was understandable, it was human, it was important to know.

But — at least by itself — it was not nearly enough to allow the rest of us to begin to comprehend the magnitude of the very public tragedy that had just happened in our province.

RCMP Chief Supt. Chris Leather, who followed Bergerman to the podium, offered little more in the way of concrete detail. In fact, it wasn’t until the first reporter asked the first obvious question that we began to get even imprecise factual information.

There were “in excess of 10 people” killed, Leather explained, the final tally unclear “because, as we’re standing here, the investigation continues into areas that we have not yet explored across the province.” That too was unexplained.

Again, all of this seems understandable in the shell-shocked, still-smouldering immediate aftermath of what we now know was the largest mass killing in Canada, a rampage made all the more complicated and confusing for investigators because the killer managed to zigzag his way through the heart of the province, setting fires, switching vehicles, settling scores, shooting strangers with both malice aforethought and seemingly incidental savagery. When all was said and done, the death toll topped 22, the crime scenes numbered 16.

The problem was that the RCMP’s public communications didn’t improve in the days that followed. There were briefings with little information, briefings with questions that went unanswered, cancelled briefings.

While that too may have been partly the result of all the still unfolding investigations unfolding in real time, it also seems — in too large a part — the result of a traditional close-to-the-vest, knowledge-is-power police culture that still does not understand the public’s right to know or that the RCMP needs to be as transparent and forthcoming as possible.

Which is why it isn’t nearly good enough for the RCMP to conduct an internal investigation into what happened and why, and then tell us what they decide we’re allowed to know. Or for the Serious Incident Response Team, which includes ex-police officers, to be the only semi-outside agency to investigate the police’s use of force during the incident.

This isn’t just about the RCMP’s actions or inactions during the incident.

There are so many questions to answer.

But those answers, it’s worth noting, shouldn’t necessarily lead to blame. 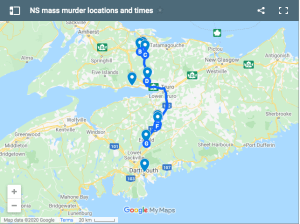 A map showing the path

While I understand the anger some family members of murder victims have expressed about the lack of an alert, I also believe it’s easier for the rest of us to find fault than it is to put ourselves in the unfathomable position first responders and emergency dispatchers must have confronted after a quiet rural Saturday night in the middle of a COVID-19 lockdown suddenly exploded in violence and mayhem.

As RCMP Supt. Darren Campbell put it when he belatedly released the Mounties’ own still incomplete timeline of events on Friday, April 24, five days after the killings: “The police officers responding to the initial 911 call and the subsequent calls did not have the benefit of the knowledge I am about to share with you. The initial complaint was of a shooting.”

Even laid out in an ordered timeline, the events of that night and morning are mind-bogglingly impossible to wrap your head around. I’m guessing none of the officers on the ground or the dispatchers in the ether — who were all attempting to make sense of what they were confronting in real time — had ever encountered such an unlikely scenario, even in the most intense active-shooter, mass-murder training exercise.

We need to be kind to all of them even as we rightly demand answers to our many legitimate questions.

The fact is the murderer is dead. There will be no trial. There is no need to put off asking — and answering — questions.

The best — perhaps only — way to get those answers now is through an independent public inquiry. The province’s justice minister can call a fatality inquiry into any violent death. So can the chief medical officer. Perhaps most significantly, the premier can appoint a full-on public inquiry into all aspects of the tragedy and make recommendations to prevent such a tragedy happening again.

Stephen McNeil should do just that. Now.