You are here: Home / Commentary / Police union says cops can’t do their job without beating up Black people

Halifax’s police union is lashing out after two of their members faced scrutiny for assaulting a Black youth.

On Monday, the union that represents Halifax police officers leaked an email to CBC complaining that chief Dan Kinsella placed the officers who assaulted a 15-year-old Black boy — leaving him with a concussion, bruising, and injuries on his hands — on administrative leave.

Dean Stienburg, the president of the Halifax Regional Police Association, told CBC that:

Morale is probably the lowest I’ve seen it in 30 years, it’s actually getting worse.

Let us be clear about what is happening here. The police are telling us that they derive morale from beating up Black children, or at least, from getting away with it.

This is not some rogue organization. This is the body representing the police, speaking for Halifax police officers. 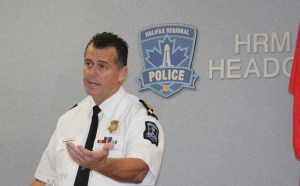 Instead, they are telling us that their priority when it comes to dealing with Black people is to continue to be able to use as much violence as they want without being held accountable. Not by the chief, as little as he is doing, and not by the public. If we refuse to let them brutalize us freely, then they tell us that they can no longer do their jobs.

They are telling us that they consider it their job to brutalize Black people.

All you police apologists, please let that sink in.

What seemingly drove the police union to writing and releasing this email is that Black people held a couple of protests asserting that no, we are not okay with the police beating up mothers in front of their children or with children being assaulted and handcuffed for challenging the police.

Stienburg’s response to this small amount of public pushback is to threaten that if they are not allowed to brutalize Black people, they will stop doing their jobs:

Officers who threaten to stop doing their actual jobs — not the “job” of beating up mothers and children — should be immediately dismissed from the force. We are being told that our police force must be allowed to escalate violently with impunity as a condition of serving the public.

Let us also keep in mind that these will be the people tasked with running a know-your-rights campaign.

This statement from the police should put to rest any ideas that police violence is a matter of a few bad apples.

Over the past couple of months, as I’ve been attending the police commission and council meetings asking them to freeze the police budget until the police demonstrate they can deal seriously with racial profiling and police violence, the officials tasked with overseeing the police and holding them accountable have responded to this moral challenge by congratulating the police on the job they are doing and giving them more money to do it.

Shame on every single one of those officials who enable a police force that is openly telling us that they consider it a necessary part of their job to brutalize children and mothers, and that if they are not allowed to do that, they cannot do their jobs or feel good.

This response by the police union to officers not even being suspended and still being paid after being filmed assaulting a child is exactly what we should expect from officers.

In Toronto, for example, the police union continues to use the exact same rhetoric against the banning of carding. A 2018 email from Toronto Police Service officer Mark Hayward to Toronto Mayor John Tory that was also leaked to media similarly argued that without racial profiling, police cannot do their jobs:

“You flip-flopped on carding and supported its demise. You forced budget and staffing cuts on the Toronto police,” read the email…

…“It is obvious Chief Saunders is a puppet on strings and you are pulling them. You have zero qualifications to run a police service and should be hands off, to allow the police to do what they do best,” he wrote in the email. 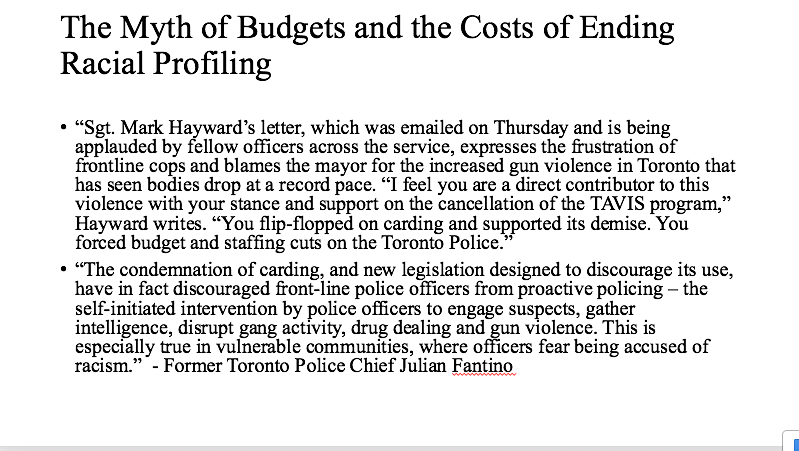 In response, I was asked if I had anything good to say about the police.

CBC’s publication of this email without interviewing any members of the Black community for context also demonstrates how the media frequently colludes with and engages in propaganda for the police. Questions a reporter should ask in this situation include:

• Why are the police leaking this email and why do they think this benefits them?

• What public message are the police trying to send with this email?

• What do Black people who are trying to hold the police to account feel about having police officers openly argue that violence against Black people is an integral part of their job?

• What effect might this have on Black people who challenge the police?

That CBC publishes this material unchallenged — and in fact provides follow-up space for the police to further assert their right to assault Black people without offering any Black voices in response — is a failure of journalistic responsibility to the Black community.

Desmond Cole, author of the bestselling book The Skin We’re In, which chronicles a year in resistance to policing and state violence, suggests that this email from the police union shows us who the police really are:

When we say that policing is violent, this is the clearest example of what we mean.

What’s going on here is that this is a distillation of the idea that policing is violence without consequences. What you notice here is that in a so-called normal workplace environment, people would be disturbed to know their colleagues are acting like this. If it were a teacher or a social worker who hurt a child, people would say, of course you have to punish them.

But with policing, the only social code is to protect each other. The code is to do whatever you want and get away with it. So there’s no outrage among police saying, I can’t believe these people are acting this way.

So what is useful about this is it tells you about their nature. They’re not saying that these violent officers don’t represent us as a police force. They’re saying: not only do they represent who we are, but letting us get away with it is part of our job, and if you don’t let us do this, then how are we supposed to do our job?

The police have shown us who they are, if we ever had any doubts. They are not interested in healing from racial profiling, in working with the Black community, or in changing police culture. And they made sure to leak this email so that the public knows it. If our officials continue to refuse to hold the police accountable while giving them more and more resources to be used in their “job” of unchecked violence against us, then they are also letting us know who they are.

This email lays it all bare. It is past time to do something about it.