You are here: Home / Featured / Police found $705,000 in cash at killer’s property in Portapique

Police found $705,000 in cash at the property of the man who killed 22 people across Nova Scotia on April 18 and 19, a newly released court document reveals.

The Halifax Examiner refers to the killer as “GW.” The Examiner is part of a media consortium that is asking the court to unseal the applications made by the RCMP in order to obtain 23 search warrants and production orders needed to search GW’s properties and access his phone and computer records. The consortium has made steady, if incremental, progress in getting some of those released and redactions removed from them.

Today, the Crown (which represents the RCMP) “un-redacted” some of the paragraphs in one such document — a June 20, 2020 application by the RCMP asking court permission to “covertly” access GW’s Amazon account in order to discover where and how he purchased police equipment that was used in the murder spree.

On April 22, police searched GW’s property at Portapique and discovered a “large amount of money” wrapped in tin foil, placed in an “ammo can.” The next day, the money was counted, and it totalled $705,000.

Much of the newly released information relates GW’s acquisition of police equipment, including purchases made at police surplus auctions and through Amazon and EBay, among other sources.

Emails from GW to Lisa Banfield detail the work on the fake police car later used during the murder spree.

On August 14, 2019, GW told Banfield that he “had put the front bumper ram on the police car and was going to work on … the cop car light. [GW] also made reference to the cop car being a bigger job than he expected as he was learning and things were going slow but are being done well and that this was his first time.”

On September 1, 2019, GW emailed Banfield to say that he “got the cage in and the windows moved to the real cop car.” 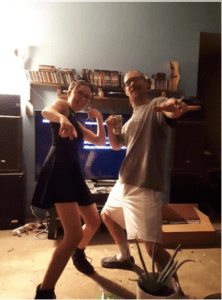 Emily Tuck and her father Aaron (Friar) Tuck. Both were killed on the night of April 18.

Aaron Tuck, who was killed by GW on April 18, was also aware of the fake police car.

Sometime after that, Tuck had an altercation with GW’s “buddy,” who was driving a 4-wheeler on Tuck’s property. The two got into a fight, but the next day, GW and his buddy came to apologize to Tuck.

Tuck’s friend said that “Tuck was bothered by the fact that [GW] had an RCMP police car and he [Tuck’s friend] told Aaron to report it to Crimestoppers and Aaron Tuck said he could not due to [GW] making a threat towards Aaron Tuck.”

“At the end of 2019,” continues the account, “Aaron Tuck told [his friend] that you could not tell the difference between [GW’s] police car and a real one.”

In early March, 2020, GW placed an ad on Kijiji to sell a side-by-side ATV, and as a result at least two potential purchasers came to GW’s Portapique property and also saw the fully decalled fake police car.

One of those potential purchasers was a man who gave GW a $300 deposit on the ATV until he could figure out a way to get it to Cape Breton. “Inside the warehouse, [the man] saw a fully marked police vehicle and commented that [GW] must be a retired RCMP officer and [GW] responded, ‘yeah, something like that.'”

The second potential purchaser also came into the warehouse, where he saw the “fully marked police car.” The man asked GW if he was a Mountie, and GW said he wasn’t, but just a collector. The man then “sat in the passenger seat [of the fake police car] and described a console where a computer would be and a radar gun.”

Yet another person saw a fake police car — a worker at Brink’s. The employee told police that when GW came to pick up his cash, he “had a vehicle that looked like a police car and [the employee] thought it was odd that the reflective tape was still on the vehicle and the mount for a computer was still in it.”

On April 26 — a full week after the mass murders — someone contacted the RCMP “to report that he found some RCMP related items in the woods near 123 Ventura Road” in Debert — this is the site where GW had spent the night after killing 13 people in Portapique and before resuming the murder spree the next morning.

The radar unit was confirmed to have been purchased by GW via a PayPal account in June 2019.

The document doesn’t say if the slippers were men’s or women’s. Lisa Banfield told police that GW had put her in the back of the fake RCMP vehicle as he set fire to his property in Portapique, but she had managed to escape and spent the night in the woods. At about 6:30 the next morning, she showed up at Leon Jourdrey’s residence, without shoes.

A man who was friends with GW told both an FBI agent and the RCMP that GW would frequently visit his place in Houlton, Maine. He said GW and Banfield would come to Maine together four or five times a year, but GW would come alone more often. He often came with a trailer in order to haul motorcycles back to Canada.

Banfield told the RCMP that GW had a Nexus card for crossing the border and “one time complained about being checked all the time. She believed that [GW] received an apology from Canada Customs and after that, they didn’t bother him and asked if he had a business as he had brought back seventeen (17) bikes to Canada.”

Banfield said that she too was listed as an importer, so that GW could place some of the equipment in her name such that he wouldn’t exceed Customs limits.

The Houlton man said that some years ago, GW helped him with small construction projects and tree removal around his property, but wouldn’t take any payment for the help. So the Houlton man decided to gift GW with a Ruger handgun. The man “said that he assumed [GW] could take a gun into Canada because [GW] was Canadian.”

The Houlton man and GW would often shoot two Glocks together at a local quarry, and the Houlton man said GW “was safety conscious with firearms and was an average shot.”

The man kept the two Glocks in a room at his house that he rarely entered. Two days after the murders, on April 21, the FBI agent asked the man about the Glocks, and he went to check, only to find them missing.

One strange bit that is in many of the documents obtained by the media consortium is also carried over to the document more fully released today: a mistaken account of another murder.

A female was located deceased in her vehicle near Hidden Hilltop Campground on Highway 4.

This is followed in the next two paragraphs (29.20.1 and 29.20.2) with the accounts of the murders of VON nurses Heather O’Brien and Kristen Beaton on Plains Road.

But there was no one murdered by GW between the murder of Hyslop in Wentworth and O’Brien and Beaton on Plains Road. Had there been, there would be 23 murders, not 22.

This mistake has bedevilled RCMP accounts of the murder spree from the beginning, when in an early press conference about the murders, RCMP Support Services Officer Darren Campbell gave confused accounts of where exactly on Highway 4 GW had visited the house of a couple and where Lilian Hyslop had been killed.

That the mistake made its way into a document filed with the court in June, two months after the murders, doesn’t speak well for the RCMP’s understanding of events, or frankly, for its care in crafting the document.