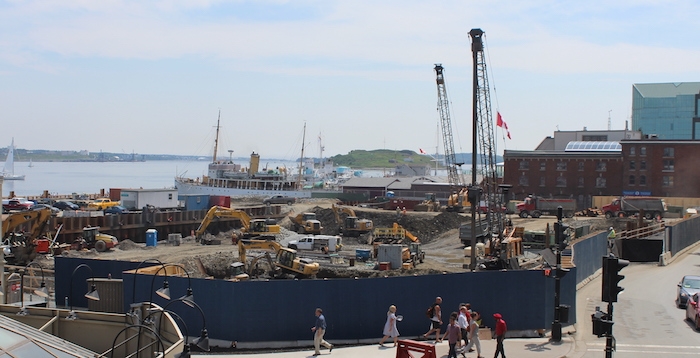 Site remediation at the Queen’s Marque site is expected to cost $2 million — more than twice the $950,000 budgeted for it. The entire cost will covered by the provincial government.

Click here to read “The cost of removing contaminated fill from the Queen’s Marque site has increased by $1 million.”

According to a release issued yesterday, the province is still considering a P3 option for a new QEII hospital:

Deloitte has been awarded the contract to explore public and private sector-led options to help determine the best approach to design, construct and maintain new buildings that will replace the Victoria and Centennial buildings in Halifax.

It is part of the QEII Redevelopment Project.

Deloitte will work closely with Kasian Architecture, the QEII master planning and programming consultants, as well as the provincial government and the Nova Scotia Health Authority. They will assess the P3 and public delivery development options and recommend an approach that is in the best interest of Nova Scotians.

Maybe they can put it in Burnside. 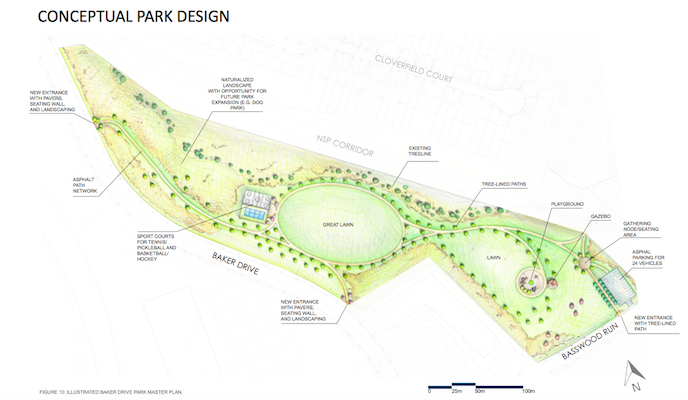 On Tuesday, city council approved the Baker Drive Park Master Plan. This morning, the city issued a tender to build the park.

On Wednesday, the RCMP reported that a seven-year-old girl had been struck by a combine in the Clementsvale area. Last night, police reported the girl had died.

The Pride parade is this weekend. A full schedule of events is here. 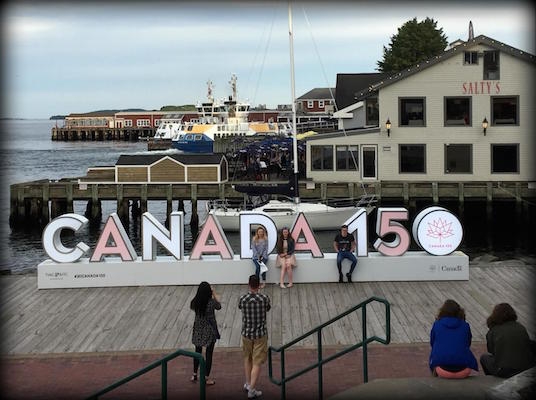 Stephen Archibald goes downtown and gets in tourism promotion mode, even using the word “vibrant.”

On July 17 at 3:15 p.m., RCMP, EHS, and Wolfville, Hantsport and Windsor Volunteer Fire Departments responded to a single vehicle collision on Highway 101 near Exit 9. A small car left the roadway and as a result of the injuries to the driver, LifeFlight was called to attend the scene in the program’s Sikorsky S-76A helicopter.

The EHS LifeFlight helicopter landed on the highway, and while on scene, the pilot noticed a drone in the area. The drone caused concern due to its proximity to the emergency scene and at times, it flew too close to the scene, infringing on rescue operations. Firefighters and police personnel conducted immediate patrols of the area in an effort to locate the operator of the drone however, no one was located. The drone left the area and EHS LifeFlight was able to take off from the scene. The drone’s proximity caused great concern for emergency responders on scene.

Corporate Communications Manager for EHS, Jean Spicer says, “Any potential or real delay in patient transport is of great concern to our teams as every second counts, especially in the case of critically ill or injured patients.” She adds, “Drones can result in significant distraction for emergency crews, and an increased risk for aircraft, crews and patients on scene.”

Here are other aviation incidents reported this week:

• On February 17, “an Irving Oil Transport Bombardier BD-100-1A10 (C-GJEI / KCE2) from Halifax, NS (CYHZ) to Saint John, NB (CYSJ) crossed the hold line on Taxiway D abeam the Threshold 32 just as a Canadian North Boeing 737-36N (C-GCNO / MPE1520) from Sydney, NS (CYQY) to Halifax, NS (CYHZ) was touching down on Runway 32.” The Transportation Safety Board notes that the incident is under investigation.

• On May 30, a privately registered Boeing A75N1 crashed into the mountain while trying to fly through Rogers Pass, BC. The pilot suffered minor injuries.

• On June 6, an ultralight plane crashed into a field near Lister, BC. Both the pilot and passenger were treated by EMTs at the site.

• Every day multiple bird strikes are reported. The concern is usually that the bird carcass will fall to the runway and present a hazard to other planes landing or taking off, so an airport worker is sent out to remove the dead bird and that’s the end of it. But every now and then the birds present problems for the planes that hit them. For example, on June 24, American Airlines flight 2449 taking off from Toronto with five crew members and 122 passengers hit “several birds below the co-pilot’s window” and it was such a mess that the crew declared an emergency and returned to the airport so all the blood and guts and bones and feathers and such could be washed off the plane.

• On July 4, Air Canada flight 185 from Toronto to Vancouver had reached the Wiarton, Ontario area when the cockpit filled up with smoke. The pilot declared MAYDAY and returned to Toronto.

• On July 6, Sunwing flight 604 from Montreal to Cayo Coco, Cuba with six crew members and 171 passengers reported that one of those passenger was disruptive and threatening the crew. The passenger was so disruptive that the pilot decided to return to Montreal, and US military jets escorted the plane until it was back in Canadian airspace. The passenger was arrested in Montreal.

• On July 9, an ultralight pilot crashed on takeoff from a private home grass strip near Bonneyville, Alberta. The plane was utterly destroyed, but the pilot walked away from it unharmed.

• On July 9, a Canadian Harvard Aircraft Association Harvard 4 carrying a pilot and one passenger landed at Billy Bishop airport in Toronto. While still zooming down the runway, a gust of wind pushed the plane onto a grassy area, where it hit a drainage ditch and a berm. The plane flipped over and came to rest upside down, the people on board freaking out and yelling obscenities and fouling themselves. Both were injured.

• On July 10, an ultralight pilot crashed into some trees near Albany, PEI. The pilot suffered minor injuries. I’m starting to get the sense that ultralights aren’t very safe.

• On July 11, Sky Airlines flight 7601 from New York to Toronto with four crew members and 69 passengers discovered that the brakes weren’t fully powered and the landing distance would need to be increased by 170 per cent. So the pilot declared PAN PAN and asked that fire trucks and ambulances and morticians and lawyers be deployed to the runway at Pearson Airport. The plane then landed and landed and landed, but all the emergency personnel must have been on a coffee break or in the loo or something, because there were no emergency vehicles to be seen. Thankfully, the plane finally came to a stop without incident.

• On July 12, a Lake LA-4-200 amphibious plane was practising touch-and-go water landings on Lake St. John near Orillia, Ontario. During one of the touch-and-gos the plane “collided with the surface of the water.” The pilot and the instructor were both seriously injured and taken to hospital. The plane sunk to the bottom of the lake.

• On July 16, a Nanchang pilot aborted a landing at Lethbridge because there was a semi truck on the runway without authorization or radio contact. The airport manager went out and gave the truck driver whatfor.

• On July 17, Air Canada flight 1925 was leaving London bound for Toronto with eight crew members and 274 passengers when, as described by the Transportation Safety Board in uncharacteristically dramatic fashion, “the flight crew heard a loud bang while at high speed. The takeoff was continued and the flight crew followed the assigned SID, declared a PAN PAN and requested vectors over the English Channel to assess the situation and prevent falling debris over populated areas when the landing gear would be lowered. ATC notified the pilots that they also heard the bang and that there were tire debris on the runway. The cabin crew was briefed to prepare for an abnormal landing and a return to EGKK was requested where the flight landed overweight on Runway 08R without further event. Both engines were shut down so that ARFF could inspect the aircraft and monitor the increasing brake temperature. Passengers and crew members deplaned on the runway and the aircraft was subsequently towed away. There were no injuries and, other than the tire, no reported damage to the aircraft.”

Lasers: July 14: WestJet flight 605 from Toronto to Regina was hit with a green laser at the Regina airport. July 15: a DND Lockheed C-130 flying a training mission out of Greenwood reported being hit by a green laser over Summerside, for a period of five to 10 minutes. The pilot flew over the area for about 15 minutes to try to pinpoint the location of the person responsible, but to no avail. July 17: WestJet flight 334 from Toronto to Charlottetown was hit by a green laser while mid-flight.

Drones: July 15: a private pilot flying above Kingston reported a black and white drone, three to four feet in diameter, flying at 3,000 feet; WestJet flight 2537 from Santa Clara, Cuba to Toronto reported a drone at 4,000 feet. July 16: Jazz Air flight 8616 from Vancouver to Winnipeg nearly hit a drone three miles out from the Winnipeg airport.

Animals: July 16: a Cessna doing touch-and-gos at the Toronto/Buttonville airport hit a coyote; fire trucks were called out as a precaution, but the plane landed safely. A pilot landing at Arviat, Nunavut reported a “large brown dog wearing a safety vest” running around the runway. July 17:  a Piper pilot reported a coyote running across the runway at the Toronto/Buttonville airport, but it’s not known if it was the same coyote that was hit by a Cessna the day before or if this was revenge coyote-ing or what. WestJet flight 3453 from Toronto reported a coyote on the runway in Halifax. Jazz flight 8896 from Boston reported a racoon on the runway in Halifax. July 18: a Cessna pilot aborted a takeoff at the Kitchener/Waterloo airport when it hit a bat. An airport worker in Whitehorse found the remains of a gopher that had been hit by an airplane.

No events of note. 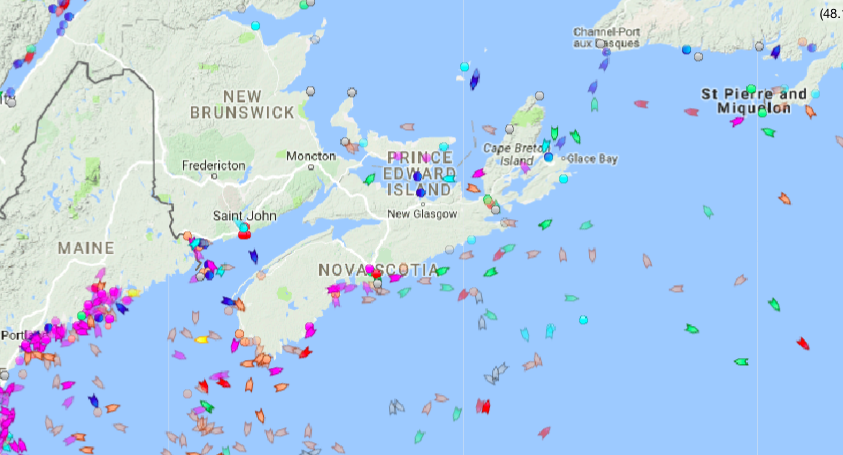 Sorry, I couldn’t find any photos of cute kittens on the internet.