You are here: Home / Commentary / Phillip’s story: “They told me it could be a lifelong job. And instead I got a lifelong addiction.”

Phillip Izzard has been trying to get someone to listen for 37 years. 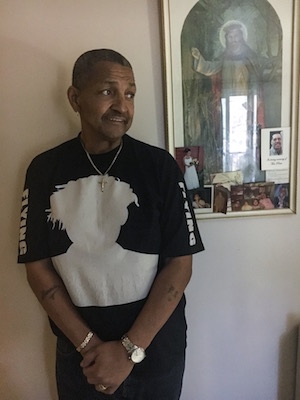 I interview Phillip in his home in Uniacke Square. The day I meet him, I have just come from an event at the Black Cultural Centre exploring the impact of the city’s apology for Africville. “Africville is still happening,” residents at the event remind us. A survivor of the destruction, Phillip remembers:

When I came in from Africville, I was four years old. We were dropped off in garbage trucks over there on Maitland street. Where the library is now, that’s where I used to live. They dropped us off right by a rental house. The house was for rent and my mum went in and rented it for 70 dollars.

I was going to school over at the old Shubie refinery taking an industrial marine rigging course. They called me to go to work at the dockyards. I said, oh my God, I got a job in the dockyards! It was like hitting the lotto. 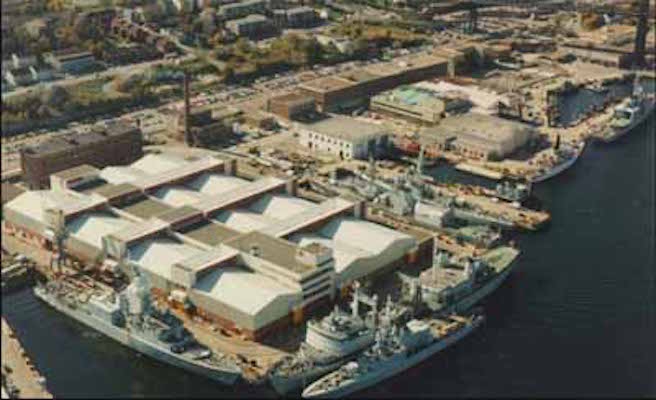 Phillip was hired through an employment agency; his job was to clean the floors and around the machines. Like Nhlanhla Dlamini, who was shot in the back with a nail gun by a white co-worker, Phillip alleges that from the moment he was hired he suffered racial bullying.

These two men made it their personal job to get rid of me. I was the only Black person in the shop, and when that man saw me he said, “what are you doing here?” I said I work here. He said “no, you don’t.”

A few days later, Phillip was ordered by his tormentors up onto stagings to clean the pipes on the ceiling. Without a harness or any safety equipment, he was told to pull up a 90-pound vacuum up. When he lowered the vacuum, he felt a searing pain in his back. Phillip believes his injury was caused on purpose:

It’s all because these two men didn’t want me to have this job I had. I was making $400 a week in 1981, and they didn’t like seeing a Black man in my position making that kind of money for doing what I was doing. And that’s when they constructed this job.

Phillip Izzard’s diagram of the staging that caused his accident. The diagram shows the vacuum he was told to pull up the four stories of staging.

At the hospital, Phillip was given a prescription for opiates. He says he was never told what pills he was being given, or that they were addictive.

They put me on opiates. The pain went away, yes it did. Because I was high. And I didn’t realize it. I was only 22 years old.

Phillip says he was given six weeks of therapy for the chronic pain in his back, but nothing else to heal the injury. To treat the pain, he relied on the drugs. He tried to go back to work, but he wasn’t able to do anything.

And then I was laid off. First from my job, then they cut me off compensation.

And then I went to the doctor and I said, “listen, I’m on these pills and they cut me off of compensation and compensation was paying for them. I need some pills cause I don’t have no more.” He said to me, “I’ll do it one time and one time only.”

And he gave me 20 Dilaudids. And red-flagged me. That meant I couldn’t get an opiate from a doctor in the city or even the hospital. 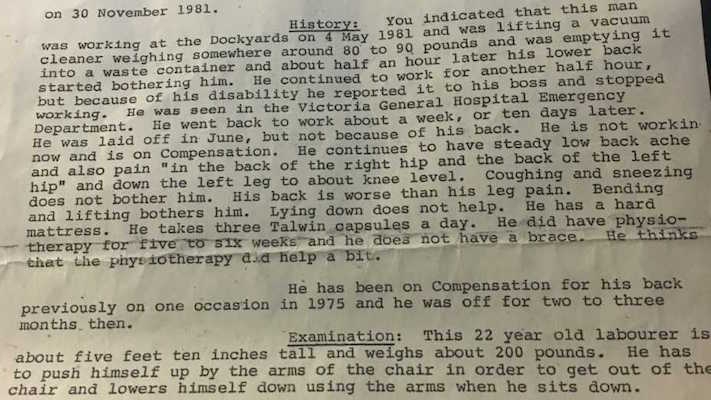 A portion of a doctor’s letter Phillip Izzard showed me from November, 1981 detailing his injury.

Phillip says that while he was cut off from getting prescription painkillers, no doctor told him he needed to go to drug rehabilitation or helped him to get therapy. Instead, addicted and in pain, Phillip turned to the streets.

I had to go the streets. Man, I remember when I first started, I was sick. Everything in my body was aching. I couldn’t even walk. I had to crawl from the fire station to the King Edward Inn where my friend lived to get a pill.

And then I beat my girlfriend up and took her cheque from her to go buy opiates. I spent a year in jail.

Phillip shows me the methadone doses lined up on his fridge. He’s left them out for me, because he wants me to understand what he’s going through.

I can’t do nothing. I can’t even have a social life. I had a girlfriend, but she can’t handle what I go through. And I can’t blame her.

I have no life. I’m stuck in the house. 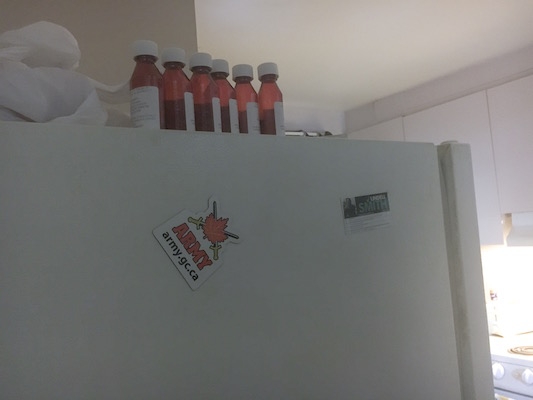 Phillip Izzard has seen terrible tragedy throughout his life. His community was destroyed and his family displaced. Two years ago, his brother Terry Izzard was shot and killed outside the door of his home. Another brother was murdered in the streets. Phillip has spent time in prison and has been out on the streets. But when he tells me about his struggle with addiction, he breaks down crying.

I should have been put on medical disability, but they left me off. They cut me off and just threw me out into the streets.

And I went on unemployment but then that ran out. And here I am addicted to opiates and I’m running around selling drugs to get the money for opiates.

I’m a young black man, no record or nothing. And now I got a record long as my arm. The cops know me so well. They didn’t even know me then.

Phillip sees the attention being paid to the opiate crisis in the news, and he wonders, what about him?

It hurts because I’ve got the evidence. And nobody’s listening to me.

Thirty-seven years. And everyone tells me they can’t do anything because too much time has elapsed. But that’s bullshit. I’m hooked on opiates because of these people. Something should be done.

If I was a white person, they’d have me all over the news.

I ask Phillip what he would say to the people responsible — the people at work who bullied him and ordered him to do a task he wasn’t supposed to be doing with no equipment, the doctors who prescribed him opiates without telling him the effects, the workplace that cut him off compensation when he couldn’t work. With tears in his eyes, he asks:

Why? Why would you do that me? I was a good worker. I did what I was told to do. And I hurt myself and I went to the hospital like you told me to. They put me on these opiates and I ain’t had a life since.

I lost my family. I lost everything. And it hurts. And these people were the cause of my destruction.

As I’m leaving, I tell him that I’ll write the story for Saturday, and that I’ll make sure his friend prints it out so he can see it. He thanks me over and over again. He just wants someone, anyone, to listen to his story.

Like so many Black people, he has suffered alone, and the only person ever punished has been him. I think about how the injustice of Africville lives on in the stories of people like Phillip Izzard, and how no apology can begin to address that pain. 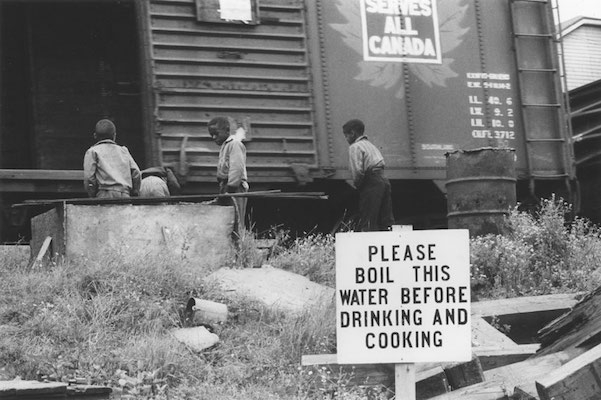 Image of Africville from the Nova Scotia Archives.

I think about how when Black people struggle with addiction, we have been criminalized, and now that white people are increasingly affected, it’s a health crisis.

I think about the Black women in this story, and their pain. And how women become the victims of violence, the “collateral damage” of injustice that we so often forget about.

I think about the protests we are having today about workplace racism and bullying, and how many people for decades endured that treatment with no help or attention.

And I think about how many of these stories go untold.

At the door, Phillip tells me one more thing:

They took a Black man and turned me into a heroin addict plus criminal.

They told me it could be a lifetime job. And instead, I got a lifetime addiction.