You are here: Home / Featured / Pharmacists’ scope of practice to include checking tick bites, prescribing antibiotics to prevent Lyme disease 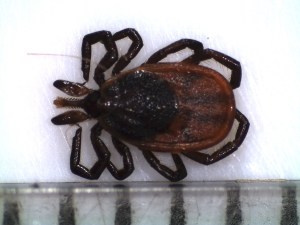 Starting on Sunday, pharmacists in Nova Scotia will be authorized to check for ticks, tick bites, and prescribe an antibiotic to prevent Lyme disease. The change to their scope of practice has been made because of the increasing prevalence of the black-legged deer ticks that has resulted in more people coming to emergency departments asking for advice and worried about the potential for Lyme disease. (Read Joan Baxter’s two-part series “A plague of ticks, tick-borne diseases, and poli-ticks” here and here).

The Pharmacists Association of Nova Scotia (PANS) posted this notice on its website explaining why pharmacies are joining the front lines to prevent further spread of Lyme disease.

“In response to rising Lyme disease incidence in Nova Scotia and the strain that post-tick exposure visits continue to place on the province’s emergency departments and walk-in clinics, the Nova Scotia College of Pharmacists Council has enabled pharmacist prescribing for Lyme disease chemoprophylaxis effective August 1,” the statement read.

Nova Scotia has the highest incidence per capita of Lyme disease in Canada. The disease is also difficult to diagnose because often people don’t know they’ve been bitten by a tick. The common test used in Nova Scotia for Lyme disease is said to be notoriously inaccurate and the symptoms are many and varied, similar to those of other autoimmune diseases such as multiple sclerosis.

A short course of antibiotics (10 days to 2 weeks) is often prescribed as a precautionary measure for people who know they have been bitten by a tick, or even think they may have been. Antibiotics work to prevent Lyme disease for the majority — but certainly not all people — if caught early.

Nova Scotia doesn’t offer any testing for tick pathogens or tick identification, and it takes at least 10 days for pathogen test results to come back from a lab outside the province.

Tick identification to determine whether a tick is a species that carries Lyme can be done by submitting a photo of the tick to an online service called eTick, but to do so a person has to have seen and removed the tick and provided a good photo. Tick nymphs are so small this may not always be possible.

This summer there are a lot more ticks and a lot more worries, which is why there has been a change, and some pharmacists are ready to begin seeing people now. Other pharmacists must still register for the professional education session conducted online by pathologist Dr. Todd Hatchette. The PANS website says after attending this webinar, pharmacists will be able to:

Usually, when a patient visits an emergency room or a walk-in clinic, the doctor sends the government a bill for providing the service. Pharmacists are asking the Province to pay them a fee (still to be negotiated) for seeing patients and prescribing the antibiotic.

“Currently, pharmacists have public funding for the assessment and for prescribing for other conditions such as uncomplicated urinary tract infections, shingles, and contraception,” said Lisa Woodill, who is the director of pharmacy practice with PANS. “We have asked that this service be added to that list. The fee that we would bill is yet to be determined.”

Pharmacare and most private health insurance plans cover the cost of the drug, but until negotiations between PANS and the government are completed, patients can expect to pay a fee upfront when they go to a pharmacy.