You are here: Home / Featured / Pharmacists and COVID-19: new pressures, weaknesses in the drug supply, and increased dispensing fees 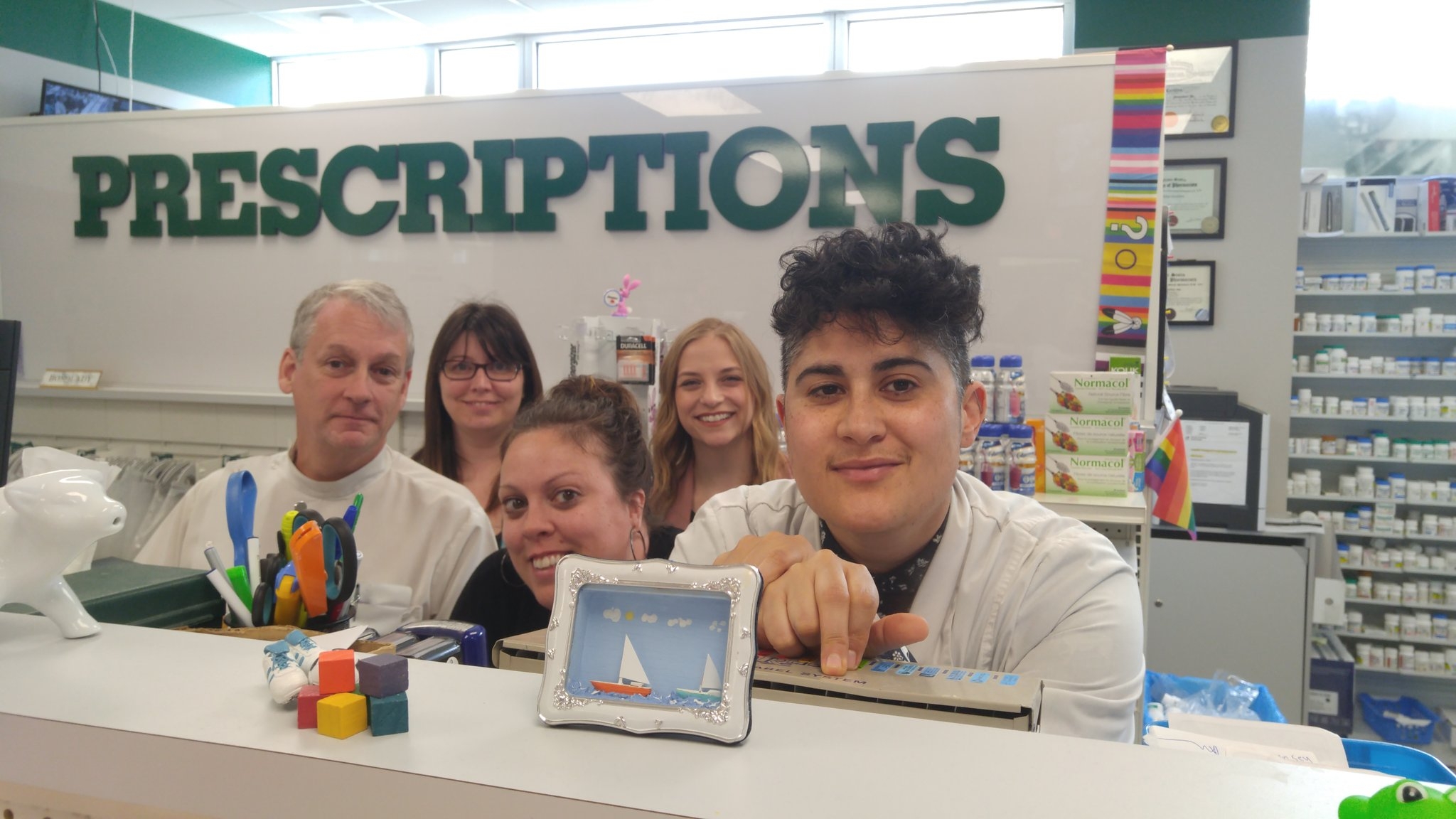 Jorna closed the interior of Scotia Pharmacy, but workers will deliver products at the door to customers, and clients can get their prescriptions at a walk-up window he had built at the back of the store where he serves clients that need prescriptions for opioid addictions. Some clients receive prescriptions through delivery.

But he kept Nova Pharmacy open because the foot traffic is lower now that there are fewer university students around. He’s also reduced the hours at both stores. 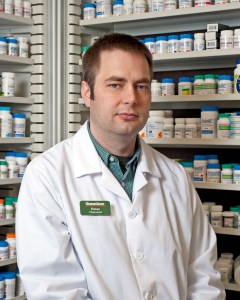 Jorna’s employees wears masks while they work because they can’t ensure social distancing behind the pharmacy counter. They wear gloves to save their hands from being dried out from the alcohol disinfecting spray. He had vinyl sheeting installed at both stores, including at the front cash at his south-end location.

Jorna also had the store phones transferred to his cell phone, so he can answer emergency calls 24-7.

We’re trying to keep as locked down as possible because our community and our patients depend on us. Be patient, allow us the time and space, and be kind.

It’s a very stressful time. We’re in the thick of it.

As healthcare providers, pharmacists are on the frontlines of the COVID-19 crisis. They’re not only filling prescriptions but also answering patients’ many questions about the disease.

According to Curtis Chafe, chair at the Pharmacy Association of Nova Scotia (PANS), what COVID-19 protocols a pharmacy uses depends on a few factors. Pharmacies in hospitals follow the guidelines from the hospital administration. Community hospitals follow protocols that come down to franchises from their head offices such as Loblaws, Sobeys, or PharmaChoice. Pharmacist-owners also put their own guidelines in place, too. “Usually you’re not left to make it up on your own,” Chafe says.

He says many pharmacies have plenty of protections in place in their stores, including protective barriers, the use of masks, gloves, and face shields, all of which depend on the availability of supplies. Pharmacies have set up cleaning and disinfecting schedules. Some stores have specialized teams come in to clean when the store is closed.

Pharmacies have reduced the amount of contact in transactions when a client gets a prescription. That means for third-party deliveries or in-store purchases, clients don’t have to sign to say they received the prescription.

Pharmacists and their teams, including assistants and technicians, work in small workspaces behind counters. While many have installed Plexi-glass barriers, to further protect staff some pharmacies have created teams to staff the store at specific times. “That way if one person gets exposed, you haven’t compromised the entire store,” Chafe says.

That’s what Jorna did. He has two teams, one with five staff, the other with six.

More recently, Chafe says business is down. That’s giving time to pharmacists and their staff to play catch up.

Overall, the busyness has been a roller coaster. I am hoping we are strong enough to weather this storm and we can keep serving our patients and making sure our stores are clean and safe spaces. This next month is going to be critical. 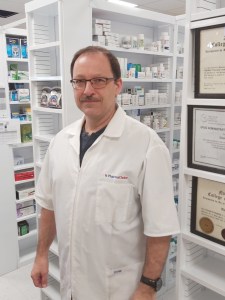 David Chiasson is the owner and pharmacist with the Highfield Park PharmaChoice in Dartmouth. Photo: Contributed

David Chiasson, owner-pharmacist with Highfield Park Pharmachoice says he got an early start and started disinfecting his store when he first heard about the COVID-19 crisis. He also installed Plexiglass barriers around the pharmacy and front cash.

There are daily cleanings in the store, including one at 8am, before the store opens. The store hours are reduced and there are limits on how many customers are allowed inside at one time. There are markers on the floor to encourage customers to practice social distancing. There are signs at the front of the store asking that customers who don’t feel well to not go inside. He says he receives daily updates on guidelines and best practices from the PharmaChoice head office and from PANS.

Chiasson says he’s spending a lot of time trying to procure products like masks, gloves, and hand sanitizer. He says the staff in front have been wearing masks for a few weeks. Pharmacy staff aren’t wearing masks right now, but they will probably start soon. “Because we are closed in, we don’t have the same interactions,” Chiasson says.

Some staff decided to take a leave from their jobs. Chiasson gave a raise to those who stayed. “To have them stay and ride this out, I do appreciate them very much for staying,” Chiasson says. “We all have to work this together to make it through this.”

In recent weeks, COVID-19 has exposed weaknesses in Canada’s drug supply. In an email, Allison Bodnar, CEO of PANS says, on March 20 the Nova Scotia College of Pharmacists issued a directive to pharmacies to restrict prescriptions to 30 days’ worth to protect the country’s “fragile” drug supply. (That directive is in place in every province).

Bodnar says there are already 2,000 drugs on the shortage list. The risk of increased shortages is greater now because of a spike in demand and a restriction on global supply because of COVID-19 in India and China, where most of the medications are sourced. Bodnar says wholesalers have also put restrictions in place, so supplies are distributed evenly across the country. There’s currently a shortage on salbutamol inhalers, which are prescribed to relieve the symptoms of asthma and chronic obstructive pulmonary disease (COPD).

Bodnar says the 30-day prescriptions means pharmacies are now dispensing three prescriptions for every one they previously dispensed. For customers, that may mean paying more overall in dispensing fees.

Bodnar defends the dispensing fees as “fair compensation” for the service provided, not only because of the work involved to fill prescriptions, but pharmacies are also covering the costs for paying staff overtime, installing protective barriers, purchasing PPE for staff, free delivery, and providing face-to-face healthcare services such as renewals and injections when patients can’t see other healthcare providers.

In an email, Bodnar says how much more patients will pay depends on their insurance coverage:

For example, lets take a senior on Pharmacare has a 30% co-pay to maximum of $380 each year. The extra dispensing means they pay about $3.65 extra on each of the second and third dispense of their prescription. If they are a patient that usually hits their co-pay maximum each year, they will hit their maximum sooner and overall, there is no increase in what they pay over the year.

Patients on plans with fixed co-pays, or plans without co-pay maximums will see a larger impact from this policy. While protecting the national drug supply is critical and we fully support the policy, we agree that this is difficult for some patients which is why we have been advocating with government and private insurers to cover the extra cost that patients are incurring as a result of this policy. Governments in several provinces, including all other Atlantic ones, have made this commitment. We continue to advocate for this every day.

Chafe says the issue of drug shortages is one pharmacists and the association will look at for the longer term, once the COVID-19 crisis is over.

We can’t rely on other countries to produce for the entire world. We have to have some stability in our own supply.

We are a country of 36 million people and a wealthy country. What it comes down to as a customer for medication, we are very small.

As for the drug shortages, Chiasson says Canada had a great generic drug industry about 10 years ago.

Now a lot of it is outsourced from India and China to keep the prices extremely low. But this is what can happen.

Right now, everyone is dealing with this emergency situation, but I do believe this issue of drug shortages will come up.

Many community pharmacists are small-business owners, too. That presents another set of challenges. Jorna says business at the Nova Pharmacy has “tanked” while Scotia Pharmacy is doing okay. Jorna says he often worries about his patients, the community, the staff, and his family.

There are so many layers of stress.

Pharmacies are very connected to their communities. Just over a year ago, Chiasson and his staff at the Highfield Park PharmaChoice started a period poverty campaign, giving out free feminine hygiene products to those in need. The campaign is funded by donations and Chiasson says use is slightly up. The store also offers free delivery of prescriptions and groceries to clients around Dartmouth.

Chiasson says he’s also fielding a lot of calls from patients, most of those related to Covid-19. Sometimes he has them call 811 for more information.

I try to maintain things so people feel somewhat normal and it’s hard because people’s lives have been turned upside-down. I hope people do what they need to do so we get through this sooner rather than later.