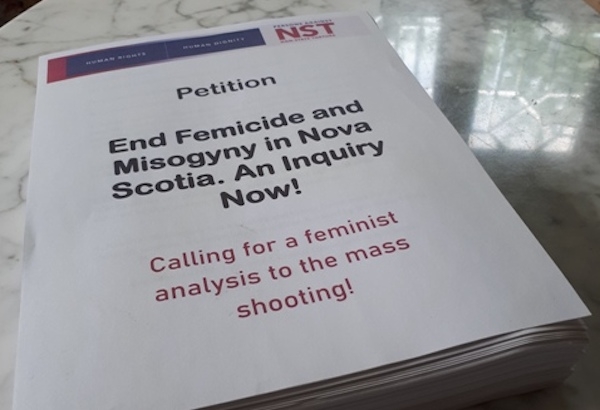 A petition containing 7,648 signatures calling for a “feminist lens” to be included in a Nova Scotia independent public inquiry into the worst mass shooting in Canadian history was sent yesterday to the prime minister; the federal ministers of Public Safety, Justice, and Women And Gender Equality; Nova Scotia Premier Stephen McNeil; as well as the Nova Scotia ministers for Justice and Status of Women.

Both the federal and provincial governments have committed to a joint review but three months after 22 victims were murdered by a gunman whose rampage began with violence toward his common-law partner, whom observers say he abused and controlled, the families of those many victims are still waiting for governments to act.

The petition campaign is being mobilized by human rights activists Eleanor Cowan, Linda MacDonald, and Jeanne Sarson. Below is the text of the petition signed by women from around the world:

The mass murders in Nova Scotia were not “senseless.”

We, concerned about the well-being of women and girls in Nova Scotia,

3. Examine the misogyny within the Nova Scotia culture and within the RCMP policies and practices that ignore warning signals of male violence against women, femicide, and mass shootings.

4. Ask that this inquiry has a healing and caring framework for all children, women, and men who have been harmed by this mass killing.

MacDonald and Sarson are nurses and human rights educators who have worked with the victims of sex trafficking and intimate partner violence for many years in Nova Scotia. They co-founded the feminist group Persons Against Non-State Torture. It demands the public confront every day abuse in the domestic sphere that goes criminally unnoticed. In response to the mass murders April 18-19, they are devoting their energy to urge governments to call an immediate inquiry that includes a feminist framework that would consider the mass shooting as part of a continuum of male aggression.

Not all the victims of the gunman the Examiner refers to as “GW” were women. The majority were. The feminist group believes GW’s controlling behaviour toward women and the failure of policing agencies to recognize and deal with “red flags” or complaints about his previous violence and stash of illegal guns signals a larger failure on the part of society to deal seriously with these issues.