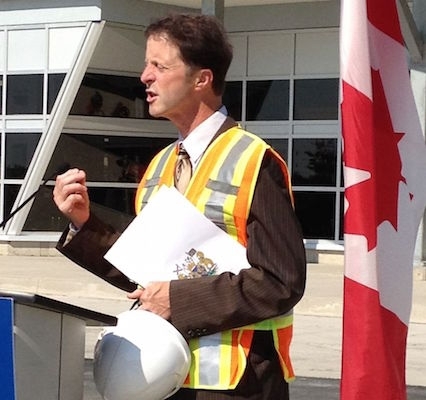 Peter Kelly is personally liable for $194,000 in costs incurred by Westlock County, Alberta, but it would be difficult to get a court judgment against him.

Kelly, the disgraced former mayor of Halifax, was hired as CAO of Westlock County in August 2014 and worked through February 2016. He has since been hired as the CAO of Charlottetown.

As I’ve detailed previously, in Westlock, Kelly oversaw the “Horizon North” project at the Westlock Industrial Park that ended up costing the county nearly $400,000, of which the county wrote off over $200,000. Sue Oberg, the Assistant CAO and CFO of Westlock County, has publicly said Kelly overstepped his authority. (Oberg has since taken a job at neighbouring Woodlands County.)

Oberg’s statements were informed by an eight-page letter Becker Brookes had written to her. The letter, which details Kelly’s actions and the legal issues involved, was written in June. I obtained the letter this weekend.

There is no doubt Mr. Kelly owed a duty of care to Westlock County to perform his duties as CAO with reasonable care and skill. By approving expenditures by Westlock County which were not approved by Council (either by inclusion in the budget or otherwise authorized), Mr. Kelly breached his employment contract and the relevant provisions of the MGA [Municipal Government Act] and is liable for the damages that reasonably flow from the breach.

Theoretically, the damages suffered by the County would be the expenditure of funds which were not approved by Council and in compliance with the MGA which the County has not been able to recoup from Horizon North. That difference is approximately $194,000.00

However, continued Becker Brookes, it would be difficult establishing exact damages. Moreover, a lawsuit against Kelly “could easily take a number of years to proceed to trial, at significant expense,” and there are other issues that muddy the water. She continues:

Taking this into account, we are of the opinion that it is far from clear that the County would be successful in an action seeking to recover damages. Anytime there is litigation, there is no certainty of success. While the County has been able to deduce much of what occurred, the County does not have an original Horizon North file and Mr. Kelly may present a very different version of events. Give the challenges with the evidence and the issue with establishing damages, we believe the likelihood of success is less that 50%. This suggests that it may be impractical to proceed with litigation.

It appears the Westlock council has decided against a lawsuit. But last week, Bud Massey, the Westlock County Reeve who has been Kelly’s defender, abruptly quit as reeve. Some county residents had accused Massey of conspiring with Kelly on the Horizon North project, but Massey’s resignation “in no way reflected any assignment of culpability to the allegations which have been made at the last two regular meetings of Council,” according to a statement the county issued. 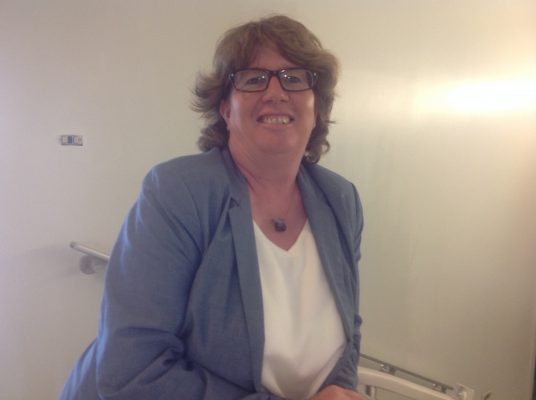 After losing her long-held south-end seat by fewer than 100 votes, former city councillor Sue Uteck is gearing up to challenge incumbent Waye Mason in this October’s municipal election. What’s inspiring her run, and what does she think the city should be doing better?

Plus, CBC steps in it by “explaining” that North Preston is some sort of gang-riddled wild west frontier. Many in the African Nova Scotian community are justifiably outraged.

Former Chronicle Herald columnist Marilla Stephenson scanned the want ads and found a $100k+ gig. The qualifications included, “Must have at least two ‘Ls’ in your first name.” Funny how that happens when you get to write the job description yourself. Plus, Halifax has a new, nattily-dressed CAO, making the rest of city staff look like a bunch of off-the-rack schlubs.

Premier Stephen McNeil announced Saturday that a byelection will be held for Halifax Needham on Tuesday, August 30. Candidates are:

By calling an election on the Saturday of a long weekend, and setting the date for that election on the Tuesday of the last week of summer, McNeil evidently thinks the Liberals will have a better chance if voter turnout is abysmally low. The idea seems to be that the Liberals are better organized, and so their get-out-the-vote efforts will pull more party loyalists to the polls than the NDP and PC can, even if no one else much votes. He may very well be right.

Syrian refugees are fishing in the Halifax Harbour, reports Sabrina Fabian for the CBC.

Haven’t they had enough travails? 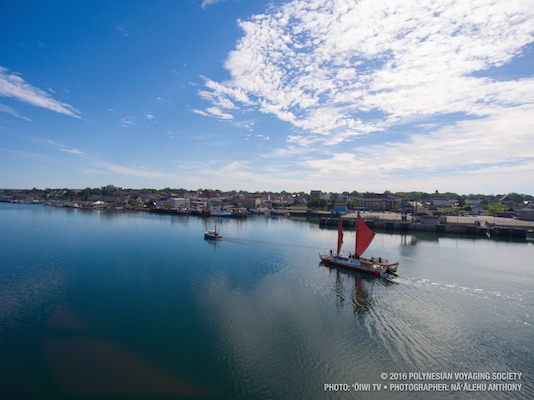 The Hawaiian voyaging canoe Hōkūle‘a arrived in Yarmouth Saturday, the start of a six-day visit as it explores the Bay of Fundy. Explains the Hōkūle‘a website:

Hōkūleʻa, our Star of Gladness, began as a dream of reviving the legacy of exploration, courage, and ingenuity that brought the first Polynesians to the archipelago of Hawaiʻi. The canoes that brought the first Hawaiians to their island home had disappeared from earth. Cultural extinction felt dangerously close to many Hawaiians when artist Herb Kane dreamed of rebuilding a double-hulled sailing canoe similar to the ones that his ancestors sailed. Though more than 600 years had passed since the last of these canoes had been seen, this dream brought together people of diverse backgrounds and professions. Since she was first built and launched in the 1970s, Hōkūle’a continues to bring people together from all walks of life. She is more than a voyaging canoe—she represents the common desire shared by the people of Hawaii, the Pacific, and the World to protect our most cherished values and places from disappearing.

In Yarmouth, reports Tina Comeau for the Yarmouth Vanguard:

A First Nations welcome greeted the voyaging canoe and her crew during its first morning in Yarmouth. Not only is this the canoe’s farthest point north that it has visited in her 41-year history, it is also its first visit to Canada.

This sail is part of a historic worldwide voyage covering more than 60,000 nautical miles, 100 ports and 27 nations. Hōkūleʻa is a double-hull sailing vessel that voyages without the use of modern instruments, using stars, winds and waves to navigate from destination to destination.

The Hōkūle‘a is tied up on the Yarmouth waterfront, just up from that other Hawaiian ship, the Alakai.

“A planned hockey heritage museum and sports facility in Windsor, N.S. — the town which claims to be the birthplace of the sport — may have to go back to the drawing board as requested federal funding may be less than expected,” reports David Irish for the CBC.

The Long Pond Arena Society asked the federal government for $6 million to help pay for a facility to commemorate the area’s significance to the hockey world, which would include two ice pads, soccer pitches, and a walking track.

“Under the programs, they [the feds] have right now … we have to work within those guidelines and the $6 million may not be possible,” said committee president Greg Kelley.

The committee has secured $3 million from the province, and $1 million each from the Town of Windsor, the Municipality of West Hants, and the private institution King’s-Edgehill School — where the bulk of the facility will be built.

And Windsor councillor Randy Matheson says out loud what we’ve all been thinking: “In my estimation this is just an obtuse way to give King’s-Edgehill public money.”

Moreover, how does Windsor get to claim a sport that was invented by Mi’kmaq people in Dartmouth? 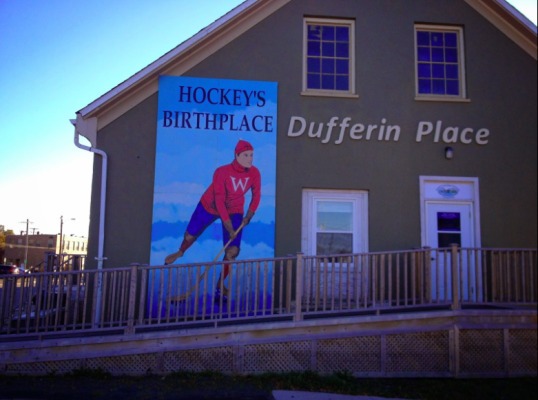 The “birthplace of hockey” thing is utter bullshit. As David Jones points out, the “blatantly misleading mural” painted on the side of Dufferin Place just off the highway in Windsor includes an image that was straight-out stolen from the cover of Hockey’s Home, a book written by Martin Jones (David Jones’ father) that argues hockey was invented… in Dartmouth. But, writes David Jones, “instead of paying direct homage to an early Starr Manufacturing (of Dartmouth, Nova Scotia) advertisement (as done by Martin Jones), the Windsor camp has replaced the star symbol of Starr with a Windsor W.” 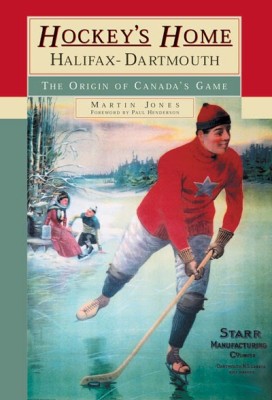 I particularly like that the Windsor mural even comes in the shape of a book.

But there’s no reason to get worked up about this. No one should care if Windsor or Dartmouth is the actual “birthplace of hockey” any more than anyone should care if Romulus and Remus actually founded Rome or if Kukulkán actually constructed the first Mayan out of maize — they’re all just stories we tell ourselves to situate our pathetic realities one minuscule micron above completely irrelevant. 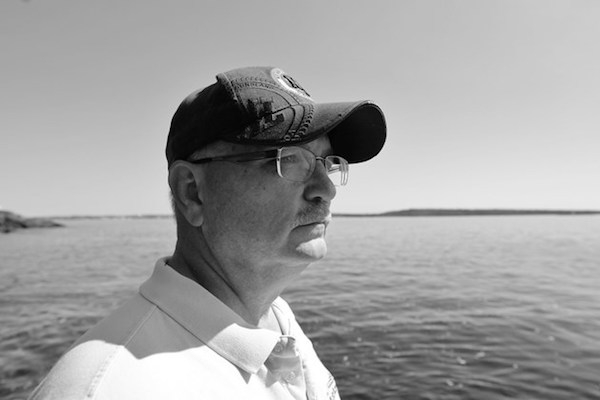 When the Herald newsroom unionized 16 years ago, “I actually voted against a union,” says McCoag. “Where I first began to see the need for the union was when I learned there were women in the newsroom having the same job I had, whom I respected immensely, who were making half of what I was.

“Do I believe in the union movement today? Darn right, I do. If unions weren’t there to challenge the business owners, we’d still be living in the days of the coal mines.

“I’m also fighting for the younger staff. They will get to be my age someday, and without some protections there, they will be tossed out. You have to protect the younger ones.”

Even though more attention is being paid to regulation and increasing the use of technology to solve sexual assaults by taxi drivers, “the onus, unfortunately, will still be on victims to report their assaults — and to provide police with as much identifying information as possible,” writes Stephen Kimber.

OK, Halifax drivers. I’ve been a cyclist for years in Vancouver, and now that I’m here we need to talk a bit about driving.

A bicycle is like any other vehicle. When I’m stopped at a stop sign on a cross-street, do not stop in the middle of the road to let me cross when it’s not my turn. When I’m making a left turn, stop stopping to let me go.

You idiots! In your attempt to make yourself feel good, all you have really done is screw up traffic flow, risked getting rear-ended and, when some stupid cyclist accepts your gesture, put them at risk of getting clobbered by a vehicle in lane two whose driver isn’t stupidly stopping at the intersection when there is no reason for stopping. Legally the fault will be on the cyclist for failure to yield, but truthfully the fault should be on your dumb ass for stopping for no reason.

Here’s the deal: When I’m on my bike and I’m waiting for my turn to go, and you stop needlessly to let me cross, I’m going to sit there staring at your bad driving face until you get fed up and start driving properly. And I’ll be laughing at how you just wasted your time with your mindless gesture as you pass.

You obey your laws, and I’ll obey mine. Simple enough, even for you.