You are here: Home / Featured / People are getting bent out of shape about $25 million being spent on bike projects over three years, but we’ve already spent more than that on road maintenance projects this year and no one batted an eye 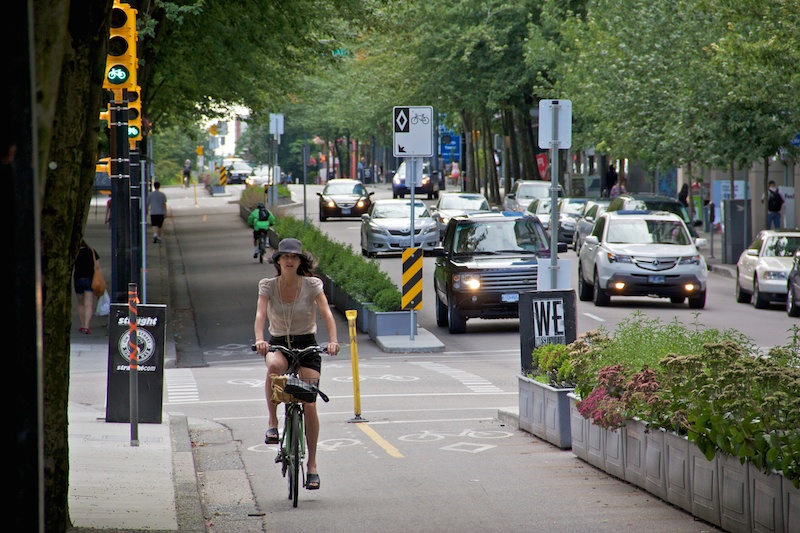 The proposed network is almost identical to the one approved in the Integrated Mobility Plan, with a few changes. On-street protected bike lanes, similar to those on Rainnie Drive and University Avenue, will get built on Hollis, Lower Water, Brunswick, Bell Road, Windsor, Almon, Devonshire, Wyse, and Albro Lake Road. Those on-street protected lanes will connect with multi-use pathways (like the Barrington Greenway), and local street bikeways, such as the newly traffic-calmed Vernon Street. The network also includes upgrades to the MacDonald bridge bikeway access on both sides.

Click here to read “‘It’s a great day for biking in Halifax”: $25 million rolls in for bike network construction.'”

Already people are screaming about $25 million going to bikes, but that pales in comparison to the public money that goes to roads and highways. The budget for twinning highways is several hundred million dollars. Butler mentions that the Burnside Connector by itself will cost $210 million.

But also consider the normal outlays for road maintenance that regularly go unnoticed, and uncommented on. Here are the road-related contracts awarded by HRM since January 1, 2019:

A couple of those projects include replacing water mains or culverts, and a couple include sidewalk replacement, but by and large, nearly all the money is being spent for automobiles.

Oh, and throw in the $2,108,888 Halifax council approved for new parking meter technology in May, and we’ve already spent about $26 million on road-related projects and we’re just halfway through the year. That’s more than the $25 million that will be spent on bike projects over three years.

And no, gas taxes do not pay for those projects. All the money for road maintenance comes straight out of the city’s general fund, which means basically from property taxes, which we all pay, whether we own a house or not and whether we own a car or not (renters pay property taxes through their rent payments, and we all spend money on goods and services that help pay commercial property taxes).

My point isn’t that we’re spending too much on road maintenance. We need to keep up our streets, and we all benefit from good roads whether we drive or not. Rather, my point is that we don’t bat an eye at these expenditures, and yet many of us get bent out of shape over a relatively minor expenditure of $25 million over three years for bike infrastructure.

And the money spent on bikes will result in considerable cash savings elsewhere. If we can increase bike riding by even a single percentage point, we’ll drastically reduce expenditures on health care because those riders will be healthier and because an increase in cycling will result in a decrease in smog.

And while governments of all stripes are mostly ignoring it, this one budget outlay really does look like something a government would do if it thought there truly was a climate emergency.

All of which is to say, this is good. We still have a long, long way to go with cycling and pedestrian infrastructure, but this is a very good start.

Relatedly, Rebecca Thomas, who cycles to work, recounts the one time she was struck by a driver and the many times drivers have acted in dangerous and rude ways towards her, then calls drivers out:

I hear people say that there are “two sides” to this argument. I hear people tell me about the terrible cyclists that weave through traffic aggressively. People online tell me that there should be better cyclist and pedestrian education.

When was the last time any of you read an article about a driver was struck and killed by a pedestrian? By a cyclist? My bike doesn’t come with airbags or seatbelts. I don’t have automatic brakes, and collision-sensing technology. I’m not surrounded by a protective metal box.

So the next time you think to criticize a cyclist, take a look in the mirror and stay in your lane. 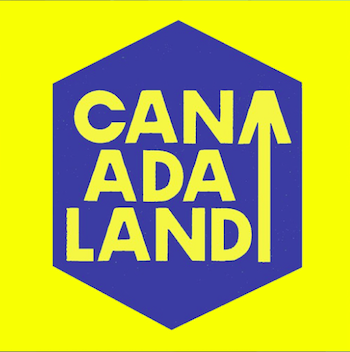 I’m was on yesterday’s edition of the Canadaland podcast, discussing the wrongful conviction of Glen Assoun. Click here to listen or download the podcast at any of the usual places.

I’ve also written a sort of primer on the case, here. This is an ongoing investigation, and I’ll have more stories soon.

At approximately 12:10 p.m. on July 28, Antigonish RCMP responded to a single vehicle collision on South Side Harbour Rd. in Lower South River. Police were assisted at the scene by EHS and volunteer firefighters. The vehicle was occupied by three people, and one passenger, a three-year-old male, died at the scene.

An RCMP collision re-constructionist was called to examine the scene, and the investigation is ongoing. South Side Harbour Rd. was closed for several hours while police were on scene. The driver, a 32-year-old woman from Antigonish County, is facing charges of Impaired Operation of a Conveyance, Operation of a Conveyance with a Blood Alcohol Level Over 80 mg%, and Breach of Probation. 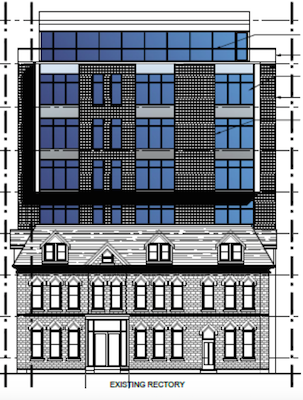 Earlier this month, the Halifax and West Community Council approved construction of an eight-storey apartment building at 2267 Brunswick Street, just behind the St. Patrick’s Church Rectory. The Heritage Trust of Nova Scotia has appealed that approval to the Utility and Review Board. You can read that appeal, here.

I don’t have any opinion on the appeal — so much of Halifax’s heritage has been torn down or surrounded by concrete and glass schlock that it’s hard to care anymore — but as usual I’ll comment on StudioWork’s rendering of the proposed building. Compare the view above, which is a standard depiction of the relative size of the two buildings, to StudioWork’s rendering, below. You could, I guess, get such a view of the new building — if you excavated a 20-foot-deep hole into Brunswick Street and lay on the bottom of it, looking up. 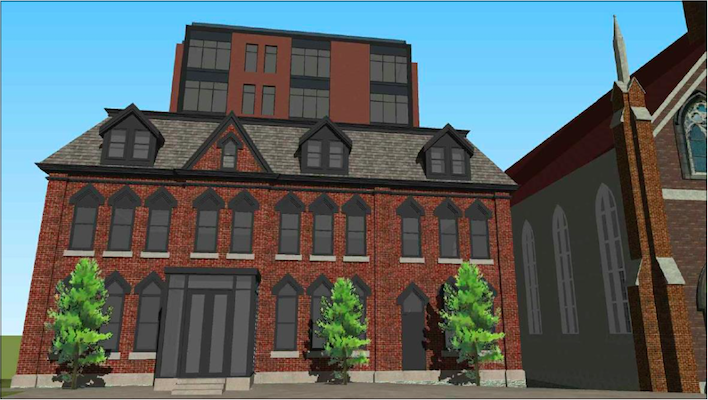 Analysis and mining of complex network: an overview of our current research (Tuesday, 11:30am, in the auditorium named after a bank, Goldberg Computer Science Building) — Alneu de Andrade Lopes from the University of São Paulo will talk. His abstract:

In this presentation, I will describe our current research on the analysis and mining of complex networks. The representation of data and knowledge as a graph allows us to take advantage of a more expressive “relational” representation of data compared to the usual propositional attribute-value representation employed in data mining. The graph allows objects and the relationship among them to be naturally represented. The presentation will focus primarily on network-based, supervised, semi-supervised, and unsupervised learning techniques developed in our group. I will comment on some of our articles on these topics, as well as some applications and future work.

There are over 7,000 signatures of concern on a petition launched in June 2019 regarding the Maritime Conservatory of Performing Arts and the historic building in which it is situated. There has been public demand for a town hall to discuss the future direction of the Conservatory’s building and concert hall and the Conservatory’s governance structure. The Conservatory Faculty Association feels there is enough information to host a town hall on all of these issues, and therefore invites the general public, the Conservatory’s Board of Governors, staff, faculty, parents and students, and other stakeholders to a Conservatory town hall.

Much thanks to Erica Butler, Phil Moscovitch, and Suzanne Rent for filling in the last few days. They did an excellent job.