You are here: Home / Education / Parents, teachers’ union voice concerns about Back to School plan 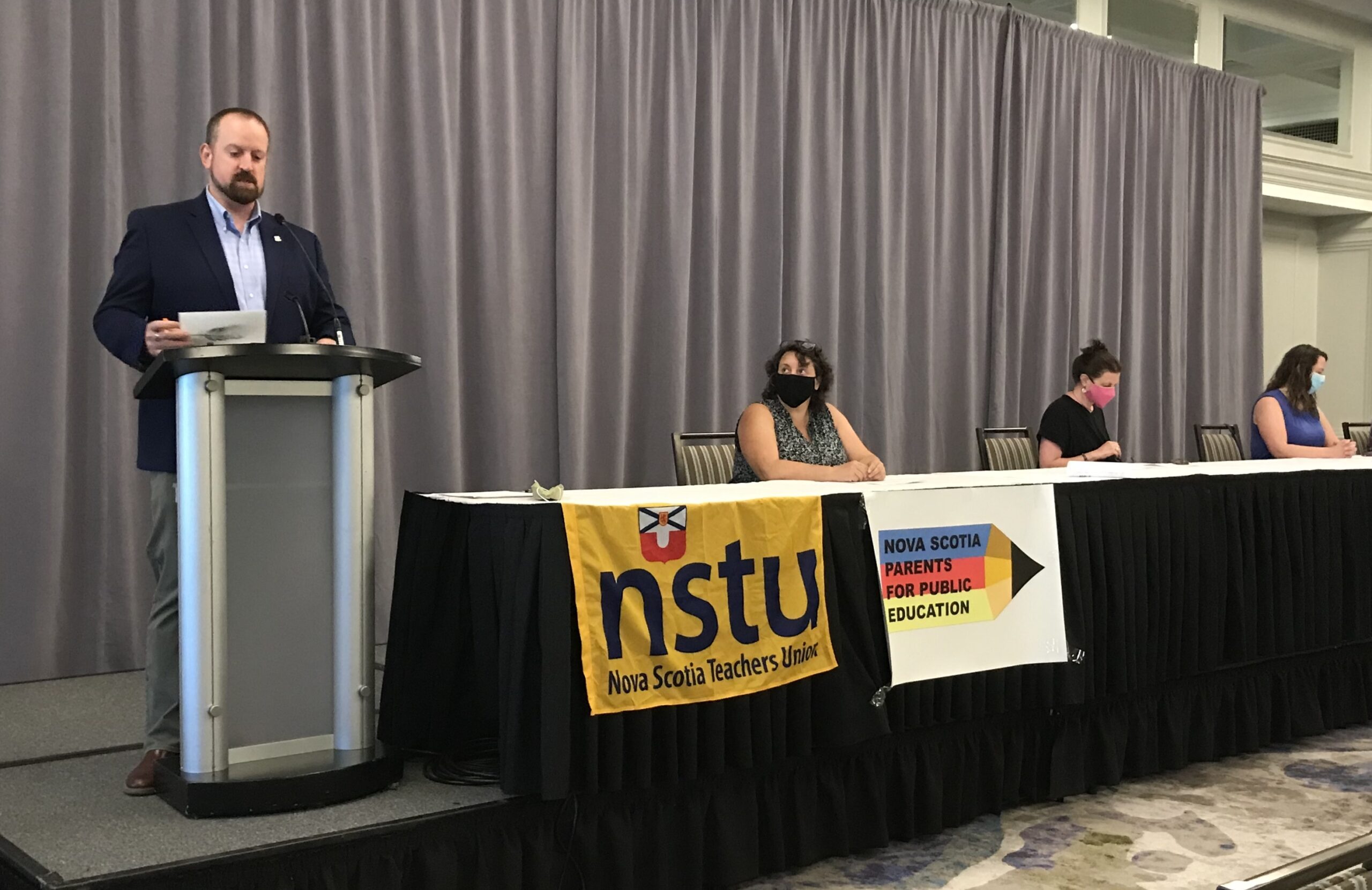 Four representatives of the Nova Scotia Parents for Public Education group joined forces with the Nova Scotia Teachers Union today at a news conference to plead for improvements to the province’s Back to School plan.

“Is our Back to School Plan good enough to keep families and communities safe?” asked NSTU president Paul Wozney. “Is it good enough that students and teachers won’t be protected by the same six feet of distance as patrons at retail outlets? Is it good enough that instead of smaller class sizes, more physical distance, and proper ventilation students are instead getting promises of more hand sanitizer and windows that might open?”

“I’m not a handwringing, hysterical mother,” said Christine Emberley, the parent of two children entering Grades 3 and 6 who is also a teacher. “Our legislature remains closed while MLAs in Prince Edward Island spent three hours checking on school readiness. We wait for sporadic information from multiple sources but New Brunswick has committed to regular, central communication with families. Ontario has outlined procedures for dealing with outbreaks in schools. B.C. has delayed opening schools to students to ensure it can meet the challenges to keep everyone safe.”

The news conference took place in the ballroom of the Westin Hotel with physical distancing observed and everyone wearing masks unless speaking from the podium. Neither the NSTU nor the parents’ group support delaying the start of school year beyond September 8 — unless that’s what it takes to reduce class sizes to comply with Public Health guidelines on physical distancing. Current class sizes in Nova Scotia range from 20 students in Grade Primary all the way up to 32 in Grades 10-12.

How to Reduce the Risk of Infection

Wozney says the Department of Education’s original plan to start the school year with high school students working online and attending school on alternate days was dropped because it cost too much money. This “blended” learning model was chosen by New Brunswick, Ontario, and B.C. and is patterned after what worked well in Denmark. In Nova Scotia, all students in the province including high schoolers are starting September returning to classes full-time.

The NSTU says the $48 million Nova Scotia will receive under Trudeau’s Safe Schools program announced yesterday means money is no longer an obstacle to implementing smaller classes from Grades 4-12.

“Spend the federal money now,” Wozney implored the McNeil government. Use it to rent space from community recreation centres, private gyms, and commercial landlords desperate for tenants, he suggested (and possibly empty church halls and Sunday school classrooms). Wozney — supported by Parents for Public Education, which claims it has garnered 8,000 signatures on an online petition demanding improvements to schools — says achieving smaller classes would mean using the eleventh hour money to rent more space and possibly hire more monitors and cleaners. More salaried teachers would not be required, he said, as teachers would essentially be delivering the same lesson to two groups of students.

Province claims Back to School plan is safe

Reporters noted Nova Scotia currently has no community spread of COVID-19 and the government consulted pediatricians at the IWK Health Centre who essentially signed off on the province’s plan to return to school.

“I respect Dr. Andrew Lynk and the pediatricians at the IWK who work there,” replied Wozney. “The number one thing they are concerned about is the emotional wellbeing of kids and their need to see their friends. But I don’t think Dr. Lynk really understands the state of ventilation in our schools. And I don’t think he has received a report on how many classrooms are actually big enough to allow students to physically distance. The Sick Kids Hospital in Toronto will not endorse Ontario’s plan for overcrowded classrooms similar to ours. So it’s fair to say there is competing advice among pediatricians.”

“I want parents to send their children back to school with confidence that we are doing everything we can to protect them,” said Premier Stephen McNeil during yesterday’s COVID-19 briefing with Dr. Robert Strang. “We consulted with Public Health and with pediatricians at the IWK. We included feedback from the Nova Scotia Teachers Union and applied information received from parents and teachers in 28,000 surveys. We have a strong Back to School program. It has been studied by experts and ranked as one of the three best in the country.”

The premier’s “one of the three best” boast appears based on a Toronto Star story by Alex McKeen. It asked epidemiologists to read and rank the Back to School plans for all 10 provinces. Nova Scotia received a B+ grade. You can find the article “Which province has the best back-to-school plan? Our experts hand out grades” on Education Minister Zach Churchill’s Facebook site.

Churchill’s Facebook site includes this disclaimer above the story: “Note: There was an error reported in this story. Our department has reached out to the media outlet to ask that the information is corrected.”

On August 20, the newspaper reported Nova Scotia high school students were to start September learning online and attending class on alternate days, the original “blended” approach the NSTU supports but which was later dumped. Although the text in the Star article was revised, parent Stacey Rudderham says the glowing grades Nova Scotia received were not changed and she argues the premier should not have told the public Nova Scotia’s plan ranks among the best.

Here’s a Facebook comment from three days ago on Churchill’s site from epidemiologist Cynthia Carr; she gave Nova Scotia an “A” based on erroneous information:

Mr. Churchill, the information I was provided by the reporter was not accurate in representing the actual Nova Scotia plan. I was informed that Nova Scotia was implementing a staged re-opening with all high school students starting with online learning. This is the closest to successful approaches seen in other countries, hence the “A”. However, I have been advised that the information provided was not accurate. I apologize for the stress this has caused educators and parents.

A matter of trust

“Parents don’t want vague assurances from Public Health and the Department of Education about how they are going to respond to an outbreak in a classroom. We want to know what happens if the child sitting next to mine goes home sick and three days later, we are told that child tested positive for COVID,” said Stacey Rudderham, who is also co-chair of Parents for Public Education.

“There is no template nor one-size-fits all,” said Dr. Robert Strang, the Chief Medical Officer of Health, when asked about a similar scenario Wednesday. “The situation will dictate our response. With any case, the risk of exposure may be different and Public Health’s actions may be different. If someone at school tests positive for COVID, they will self-isolate. We will identify their close contacts. Will we have to send a class or classes home? Quite possibly.”

“I think there is a lack of trust in government,” said Rudderham. “It feels to parents like they are flying by the seat of their pants when we don’t get answers to our questions.”

Rudderham said the revised plan released by the Ford government in Ontario yesterday gives parents more clarity around what would happen as specific situations arise. The Ontario strategy “calls for all members of a class cohort to be sent home to self-isolate in the result of a single positive case among the group. An entire school may also be shut down if the local public health unit finds evidence of ‘potential widespread transmission,’ such as a number of positive cases with no known source outside the school.”

Epidemiologists agree new cases of COVID-19 will emerge with the re-opening of schools and no one will know whether a student with a cold or a cough should get tested for COVID-19 or wait it out. It’s likely more students will be sent home from school as a proactive measure and that will also create reverberations for parents and employers.

Schools and Public Health need flexibility to make decisions, but parents are clamouring for some ground rules.