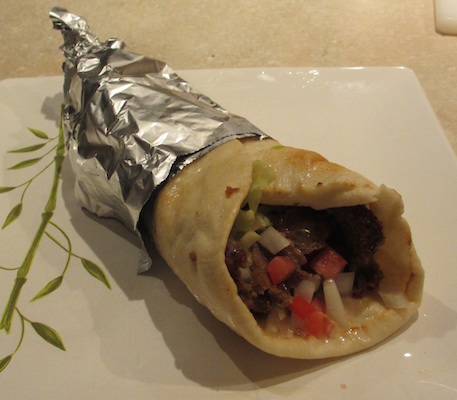 I didn’t have time to get into this yesterday morning, but Halifax council Tuesday voted 12-4 to order a staff report about naming the donair the “official food” of the city.

Can you tell there’s an election coming?

This is, in a word, pandering.

Here’s another word: pathetic. In her request for the official food designation, councillor Linda Mosher noted that:

It has been 42 years since the Donair was invented and it has become an important part of Halifax Regional Municipality’s culture and identity.

“The donair is to Halifax what the banh mi is to Saigon, the jambon-beurre to Paris. It is a quintessential Haligonian gastronomic experience, as East Coast as Jiggs dinner.”
—The Globe & Mail

In addition to these Cities, others are known for their foods such as Philapelphia (sic) for the cheesesteak, and Chicago for its deep dish pizza, The Donair should be proclaimed as Halifax’s official food.

But here’s the thing: The cities of Saigon, Paris, Philadelphia, and Chicago are not so desperate for outside attention that their governments have to make official proclamations about their food. Nobody in the world, not a single one of the Earth’s seven billion people, ever said, “on the advice of the councillor from Ward 14, I’m going to have a slice of that Chicago pizza.” No, those cities’ food speaks for itself, and doesn’t need the support of a two-bit politician angling for a restauranteur’s campaign donation. Truth be told, if Philly cheesesteak could speak, it would see a group of pandering politicians and say, “youse can take yourse official food designation and shove it — wit onions and whiz.”

Council took up two other matters Tuesday that have some bearing on the donair issue. The first involved a 20-minute discussion of, sigh, a town crier. I doubt Halifax ever had an actual town crier — the people who founded this place were working too damn hard to have their quiet moments intruded on by such nonsense. But if there ever were a real town crier, Cornwallis undoubtedly chased him off the very nanosecond John Bushell fired up the printing press for the Halifax Gazette in 1753. Ever since, a town crier has been a sort of Disney character, a provincial version of the teenagers who wear giant Mickey Mouse or Pluto costumes in the Orlando theme park, but set loose on the Halifax waterfront instead, with the idea that this somehow appeals to tourists. But I tell you what, if I were a tourist getting off one of those cruise ships and came upon some drunken fool from the suburbs in an idealized version of 18th century garb wandering about the boardwalk and squawking on about donairs, I’d think, “damn this place tries too hard.”

The other issue council took up Tuesday was a sensible, even forward-looking, resolution to join the Blue Dot campaign, which declares that a healthy environment is a basic human right. It’s the recognition that clean air, clean water, and healthy food lead to a better life for the citizenry. But then just an hour later, council voted to bestow honours on an artery-hardening death meat. Nobody ever accused Halifax councillors of being overly self-aware.

For the record, the four councillors who refused to debase themselves by pandering for donair votes were Bill Karsten, Waye Mason, Jennifer Watts, and Steve Craig. Darren Fisher didn’t vote because he’s off to Ottawa.

Halifax Regional Police responded to a vehicle/pedestrian collision that occurred this morning in Halifax.

At 6:15 a.m., police responded to a vehicle/pedestrian collision at the intersection of Dunbrack Street and Langbrae Drive.  A 62-year-old woman was crossing the road in marked a crosswalk when she was hit by a car that was travelling eastbound on Knightsridge Drive that was making a left-hand turn onto Dunbrack Street. She suffered non-life threatening injuries and was transported to hospital by EHS.

The 26-year-old driver was issued a summary offence ticket under section 93 (2)(h) of the Motor Vehicle Act for failing to yield to pedestrian at walk light as well as section 184(4) driving motor vehicle with obstruction on window or windshield.

3. Why the phrase “cringe-inducing” was invented

I feel it is important for our youth to participate in our society and I encourage my children to volunteer whenever they can. On Sunday, October 11th, 2015 my children were volunteering for the Whycocomagh Gathering of Celtic Colours. While my older child has volunteered with Celtic Colours in the past, it was my 14-year-old daughter’s first experience. She was having a great time meeting lots of interesting people and feeling valued for her work.

Then there was a problem. An individual was sitting in the wrong seat and in trying to remedy the situation, my 14-year-old daughter was verbally assaulted, as were other members of the Celtic Colour team. Sometimes mistakes are made. If the gentleman was led to a wrong seat, we apologize. What may have been a miniscule seating error, such as this, does not warrant the behaviour you exhibited towards my daughter and the other volunteers. I would like to apologize to the lady whose seat you hijacked and to the visitors sitting near you who witnessed your profane and vulgar attack. What makes this incident even worse in my mind, is that I have learned that you are a resident of Cape Breton and run a local business that caters to the tourist sector.

I want to let you know sir, that as you sat in a seat not yours, tapping your feet to the rhythm of the music, a child left the concert crying and upset; her confidence shattered. I had thought of expressing the same sentiments to you that you bestowed upon my child, but I just cannot be that rude. I will, however, be glad to give a character reference for anybody inquiring about your place of business.

P.S. I would like to thank the Celtic Colours team for the support and empathy they showed towards my daughter.

Transportation Standing Committee (1pm, City Hall) — not much on the agenda.

Michael Napier Architecture wants to break with the tradition of building only all-white houses in Dartmouth.

Public information meeting (7pm, Alderney Library) — Michael Napier Architecture wants to build a seven-storey, 49-unit apartment building at  181 Pleasant Street, which is that triangle of land where Bubbles Car Wash used to be, a block north of the Woodside Beverage Room.

Veterans Affairs (9am, One Government Place) — Paula English, Chief of Program Delivery, will be questioned.

Thesis defence, English (9am, Room 3107, Mona Campbell Building) — PhD candidate Adam Hutka will defend his thesis, “”Word, Image, and Vision: Cardiosensory Sight and Cognition in the Work of the Pearl-Poet.”

World literature (Mystery Time, KTS Red Room, 2nd Floor New Academic Building) — First rule of event listing: you need a time! Oh well, if you get there at maybe 9am and hang out there all day and, who knows, maybe well into the evening, eventually you’ll hear Suzanne Conklin Akbari, from the University of Toronto, speak about “Decentering the West: Medieval Studies and World Literature.” 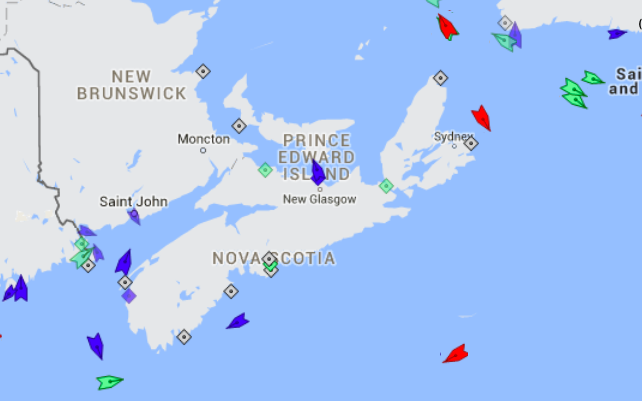 The seas in the Maritimes, 8:45am Thursday. Map: marinetraffic.com

No cruise ships are in port today.