On Jan. 3, 2014, a worker sitting in his truck suffered a fractured skull and a brain injury when he was hit by a piece from a cable that snapped while being used to tow a nearby ship. According to an application for a search warrant filed with the provincial court in Halifax, investigators believe interviews of people involved and an equipment review could support the laying of four charges.

The CBC is slowly FOIPOPing every conceivable public document and writing up the results, no matter how thin the gruel: “Nova Scotia MLAs spent $32K on event tickets last fiscal year,” relays the headline, and the accompanying article  provides the mundane details — Sterling Belliveau went to the Fisheries Expo, Lenore Zann went to the Neptune Theatre, Patricia Arab went to a fundraiser for the Alzheimer Society.

Thirty-two thousand dollars is on average $627 per MLA, with NDPer Lenore Zann topping the list at $2,632.69 in expenses.

There’s nothing wrong with looking at MLA expenses, especially given the recent history of outright criminality related to the expense file. But there’s no suggestion that the latest round of expenses violate expense rules or are otherwise unethical, and no analysis is provided to show that expenses are out of line with past seatings of the legislature and there no comparisons to other provinces’ legislatures. In fact, the takeaway from the data the CBC uncovered is that MLA expenses seem to have been properly regulated, and the abuses of the past have been eliminated. It’s a good news story.

But rather than frame it as a good news story, reporter Jean Laroche’s article is strictly neutral, providing just the facts, possibly because giving the context for the expenses might show just how much of a non-story it is. I’d argue that the neutral tone is meant to feed unfocused public anger at politicians, and the headline on the front page of the CBC website suggests as much: 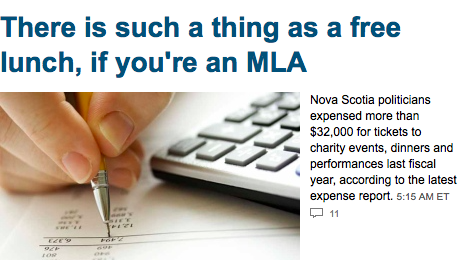 “Free lunch,” get it? The suggestion is they’re ripping us off.

I bring this up because these expenses are chickenfeed compared to what happens in the private sector. Oh, $32,000? Please. There are a hundred corporate execs in town expensing that much individually. And no, those corporate expenses do not magically disappear thanks to the miracle of the marketplace; just as surely as MLA expenses are funded through the tax bill, the costs of executive country club memberships, first class airfare, and dinners and drinks at five-star restaurants show up in the price of goods and services the public consumes. But there’s no way to discover those corporate expenses, so we’ll scrutinize the comparatively minute MLA expenses instead. 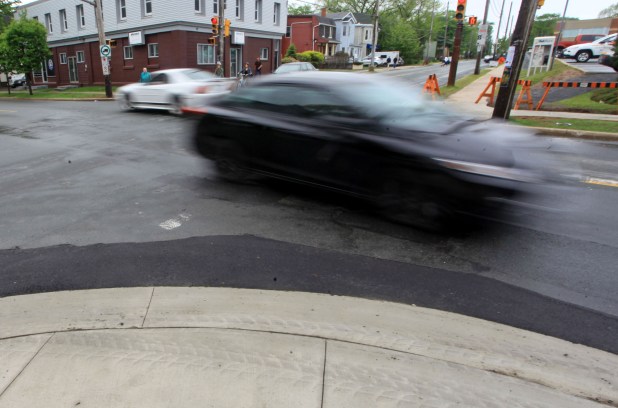 The city has been reworking intersections such that where the sidewalk hits the street it fans out smoothly, which makes it easier for people using wheelchairs to cross the street. But the same design presents navigation problems for the visually impaired, reports Metro’s Staphanie Taylor.

Global TV’s Julia Wong provides a broad analysis of both the future costs of providing mental health services in Nova Scotia and strategies that can both bring down those costs and better serve those facing mental illness. 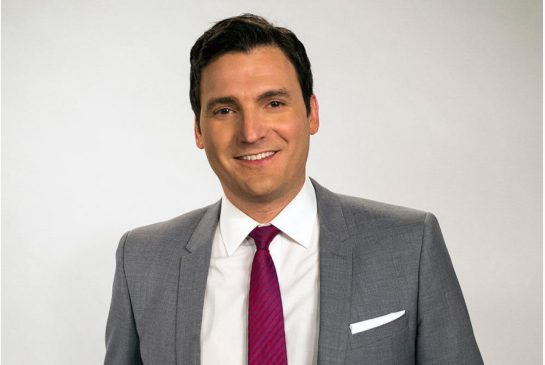 In response to my comments about Evan Solomon yesterday, several readers expressed indifference to the story. Some didn’t see why Solomon connecting his interview subjects to an art dealer and (secretly) collecting finder fees for completed sales is such a big deal. Others suggested that whatever Solomon’s sins, he can be excused because he’s a good interviewer.

I disagree that Solomon is a good or aggressive interviewer; I found his voice grating, his manner vapid, his questions scripted. There are plenty of CBC interviewers who are far superior, in my opinion: Anthony Germain (Solomon’s predecessor at The House), Anna Maria Tremonti, Linden MacIntyre, Carol Off, Terry Milewski and, locally, Stephanie Domet.

But opinions differ. Maybe you think Solomon is a wonderful interviewer. For the sake of argument, I’ll concede the point, because it doesn’t matter.

Solomon broke one of the paramount rules of journalism: you can’t credibly grill the powerful about conflict of interest if a big conflict-of-interest elephant is hiding at the bottom of your desk drawer.

Nor is it enough for a journalist to say, “It didn’t really affect my work. I can still be balanced, fair and objective in my reporting or writing.”

Fact is, you can’t — not if you have a financial relationship with or stand to make money from someone you’re interviewing. Solomon might think he can separate his private life from his professional one, but many others don’t. Nor should Canadians be expected to.

Solomon was sitting down to interview very powerful people: people who can start wars; people whose decisions can affect the global economy, throwing millions out of work; people who quite literally control the fate of the world through their action or inaction on climate change.

It’s good that the Canadian people have a journalist to represent them — someone who is paid to stay on top of current events, is trained in interviewing techniques and can ask penetrating and pointed questions to get straight answers about important policy issues.

Such interviews can go several ways. Ideally, the journalist does his or her job, asks the hard questions and gets the insights Canadians need. Sometimes, doing so will be seen as rude, and sometimes it will upset the interview subject. If asking the hard questions means the guy running the Bank of Canada across the table leaves the interview in a huff, hating your guts, well, that’s the way it goes, it’s part of the job.

But if through the interview the reporter’s thinking, even subconsciously, “hey, I wonder if I can get this guy to have drinks with me after, and I can introduce him to my art dealer buddy…” then the interview will go a different way entirely. Better not overly upset that Bank of Canada guy.

Imagine hiring a lawyer to represent you in a lawsuit, and unbeknownst to you the lawyer is meeting with the person you’re suing and arranging art deals that land the lawyer hundreds of thousands of dollars. You’d rightly be upset: how can a lawyer  properly represent you when he or she is making more money dealing with the person you’re suing? That’s roughly what Solomon was doing.

More than the conflict of interest specific to the art deals, Solomon had a conflict of class. He could have chosen to be one of us, one of the common everyday people trying to make our way in the world in the face of the innumerable financial and work obstacles in our way, or he could have chosen to be among the elite for whom money is not an issue. He chose the latter, and in doing so he betrayed us.

Here’s how Wade Rolland, an investigative journalist who teaches journalistic ethics at York University explained it to As It Happens last night:

[Solomon’s actions are] a breach of journalistic guidelines. They’re there for a reason. They’re there to protect the relationship of trust that needs to exist between journalists and their audience, if we’re going to have a democracy.

It’s reflective of a culture of entitlement that comes with a kind of corporatization of places like the CBC. You measure success in a different way in that kind of entitlement culture. Public broadcasting and journalism especially needs to be a culture of service, where you’re not entitled to get rich. You’re not entitled to be famous. But you have the privilege of being able to serve the public in a job that is about as great a job as you can imagine.

If you want to be a journalist, you’ve got to recognize that it’s a special kind of job. Everything centers on trust with your audience. The ethical principles are pretty darn basic: avoid needless harm, tell the truth, seek justice — all those corny, basic things.

The corporate culture of entitlement tends to mess up your moral compass. I mean, it’s pretty nice to be able to go to work in a $2,000 suit and $600 shoes, but it doesn’t really keep you in touch with the people who are your constituency, who can buy a car for the price of your clothing.

Inevitably, there will be those who will continue to excuse Solomon. He’s different. He could pull off the side art deals and still be a good interviewer. He’s liked.

But what about the next big name host? Once you cross those ethical lines, how do you tell the next 10 celebrity reporters they can’t make money off their connections? How have you not destroyed any hope of future integrity?

Some things are, in fact, inexcusable.

(direct link to this section) 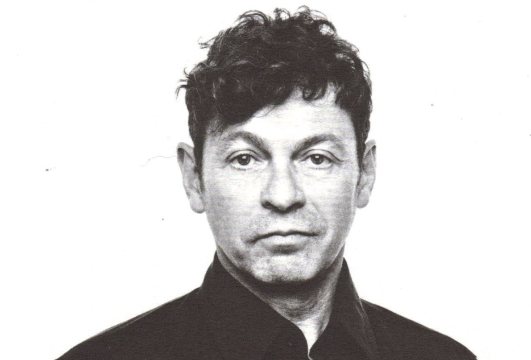 The Ottawa Citizen pulled together some of the things Bruce Bailey, Solomon’s art dealer friend, has written for the Globe & Mail through the years. Turns out, Bailey is something of a prick. A selection of Bailey’s opinions:

• When I go clubbing, I find that my vintage Romeo Gigli pinstripe suit ensures that my dance card is double-booked before I even hit the dance floor.

• Sex [advice to women]: Morning sex is key. Men over 40 find that their testosterone levels are highest then and performance accordingly stronger. Set an alarm to vibrate under your pillow to not disturb the sleep of your man and rise 55 minutes before breakfast. Scurry to the kitchen, squeeze fresh orange juice and make a Thermos of coffee with a slice of cinnamon bun.

Hurry back to the bedroom with the breakfast tray and initiate sex immediately and quietly so that he thinks he must have been dreaming of you all night. When he is happy, put the tray before him for postcoital refreshment. 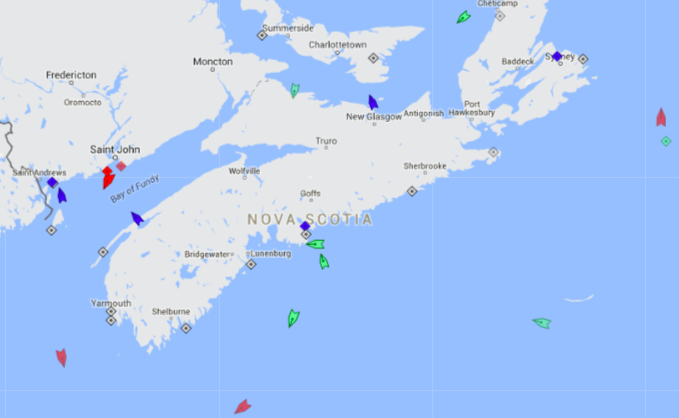 The seas around Nova Scotia, 8:30am, Thursday. Map: marinetraffic.com

The cruise ship Pearl Mist is in port today

Today’s headline is a tortured reference to the Twilight Zone episode, The Lonely, which takes place on Ceres, the asteroid: