No, not soccer, but we’ll start with that. Reports Chris Cochrane for Local Xpress:

The top official with a new Canadian pro soccer league, planned for a 2018 start in several major Canadian cities, was in Halifax Wednesday for talks with those behind a proposed local franchise.

So far so good. And the proposed league has a conservative, restrained business case:

“This gives us an opportunity to play on that stage as national players but in a much more right-sized, reasonable format,” he said. “The plans for this league would be budgets around 6,000 to 8,000 fans per game. I’d always said that’s the right size for Halifax. We’ve proven it for the Mooseheads and with the University Cup. When you start planning for events over 10,000 the numbers don’t work. Our population can’t sustain that.”

This seems reasonable. Some private businesspeople want to start a company based around soccer, and they appear to have the expertise to pull it off, so good luck! …. Oh, wait, there’s that other S-word:

The team would require a new stadium or huge refurbishing of an existing structure. Martin said he hopes a small stadium can be built in the downtown area, where it could serve a role similar to [$48 NSF Fee] Centre as a sports entertainment focal point in the entire community.

His group is already eyeing a familiar downtown sporting landmark.

“We’ve talked to the city about the opportunity to do it at the Wanderers Grounds. We have to make a good case to the city why this is a good idea. We’ve already got plans for an 8,000-seat stadium on that site with the ability to expand.

Martin said he’s reluctant to talk cost, until more details of the proposed league become known. But the intention is to build a very modest temporary stadium “in the few million dollar range” that can be expanded if needed.

“It would be about 15 home games a year,” he said of the Canadian Premier League use from late April to November. He said once there was a proper facility other sports, such as rugby and outdoor lacrosse, could be played there and other sporting events brought to the city.

It’s not clear if Martin is suggesting that his group will pay for the stadium or if he’s asking the city to build it. If the former, I say let them have at it. If they want to build a facility on public land on their dime, so long as it can be used for other functions, that’s OK with me.

And even if they want the city to pay for the thing, I’m not automatically opposed. It isn’t crazy that a modestly sized and modestly priced stadium for uses such as these can be part of the city’s recreation program. But I know how these things go: people will demand that it be big enough for headliner concerts and say it must seat 20,000 people in order to attract a CFL team (which will never happen, for reasons Martin articulated above), and next thing you know we’ve got a $120 million white elephant. 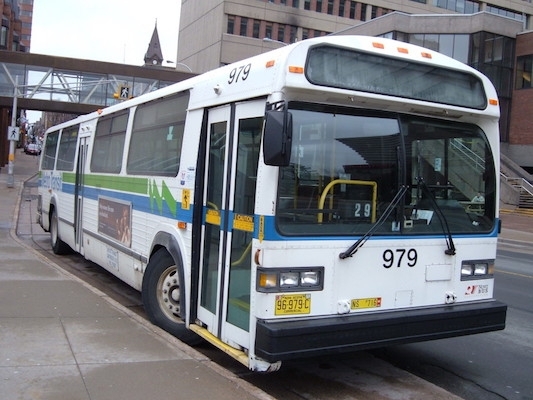 “New automated stop announcements will launch Monday on a select number of public buses in hopes of making the commute easier for passengers who are hearing or visually impaired and tourists unfamiliar with the city,” reports Cassie Williams for the CBC.

I’m all for these stop announcements. When I’m using the bus in Toronto, I find the announcements extremely helpful, allowing me to orient myself in a mostly strange city. And in Halifax, especially in winter, riders often can’t see out the bus for the snow and muck covering the windows, so the announcements will decrease the stress of making sure to get off at the right stop.

Tiffany Chase, a spokeswoman for the municipality, said Wednesday the voice behind the announcements doesn’t belong to a real person but is computer-generated. She described it as a “calm” and “soothing” female voice.

The stops should be a recorded real person’s voice, and a real person with a proper Maritime accent. My choice would be a North Dartmouth accent and word phrasing:

Next stop: Scotia Square and that.

Next stop: Montebello Drive, but buddy don’t get off here, it’s just one more stop to the MicMac Tavern donchaknow.

And you just know that the computer voice will screw up the pronunciations. I can’t wait for the rider complaints about “Gottingen Street.”

Seriously, tho, what’s wrong with hiring an actual person to record the stops?

“The people of the municipality got a chance to have their say about 18 proposed developments in Halifax and Dartmouth at two unprecedented public meetings on Wednesday,” reports Zane Woodford for Metro.

The 18 properties are being considered for exemptions to be written into the Centre Plan. 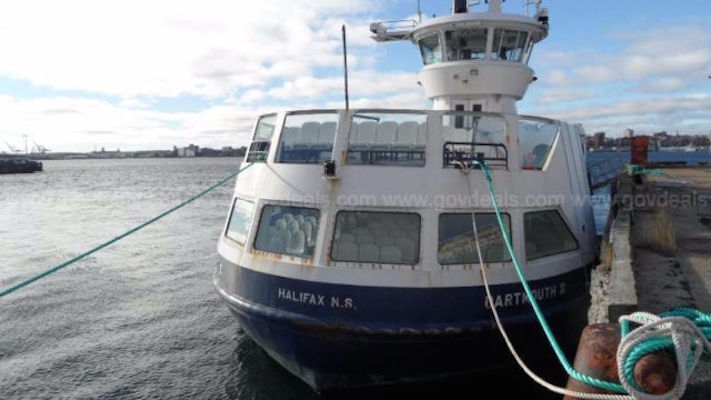 You can buy the Dartmouth III ferry for $150,000, but be warned: “Batteries need to be replaced.”

Yesterday, I boneheadedly confused the Eastern Front Theatre with the Neptune Theatre, and scores of people let me know. Mea culpa.

The striking Chronicle Herald reporters are asking people to boycott the Neptune, not Eastern Front. (Eastern Front rents the Neptune for its performance of A Christmas Carol.)

My apologies to Eastern Front. 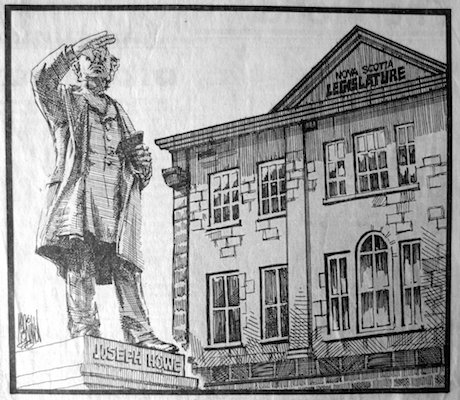 This is “an editorial cartoon from the 80s that never grows old,” Stephen Archibald reminds us. “[I] don’t remember what it was originally about, but this week it works yet again.”

Most of all, I think filtering public money through public servants like teachers and nurses into the economy makes a lot more sense than filtering it through a pulp and paper mill or a second cruise ship berth or John Risley. Not only do you get your children educated and your injuries tended to, you get people who support local businesses and sports teams and arts venues and craftspeople. People who pay for plumbing and electrical work and kitchen renos and landscaping and small engine repair. People who also pay taxes.

Bill Black, in fact, is okay with teachers’ salaries — his problem is with their pensions and benefits that are “far richer than the private sector.”

Like the Halifax Examiner, Campbell’s Cape Breton Spectator is subscription-supported, so the above article is behind a paywall. I’m a proud subscriber, and you can be too. 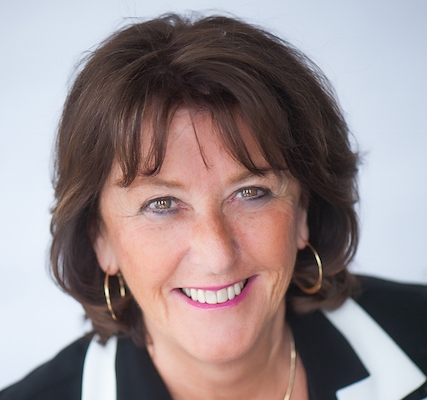 “I do not see any path forward [with the teachers’ contract issue] without the resignation of Education Minister Karen Casey,” writes Graham Steele:

I do not say that lightly. Nobody knows better than me the weight of a ministerial resignation.

The key is that a ministerial resignation can be a public symbol. It is possible to resign with honour. That is a notion fading from our democratic memory, and which we need to revive.

Dr. Al Nassar was recently portrayed as proven guilty and is being condemned.

Section 11(d) in our Canadian Charter of Rights and Freedom gives the benefit of the doubt to the accused, and treats us as “innocent until proven guilty,” and not the other way around.

Dr. Al Nassar is loved and well respected among his colleagues, who are in disbelief of the accusation. He is currently receiving a lot of support from his colleagues, co-workers and people who know him, including many of his patients.

Therefore, it is fair to give the man who served our community for several years some grace and decorum, and give him the benefit of the doubt, and let the court and the justice system takes its course.

“For he that is without sin among you, let him first cast a stone” — Jesus

Appeals Standing Committee (10am, City Hall) —  Shahab Madadi  wants to talk to the committee about the city’s refusal to grant him a taxi licence.

Thesis Defence (11:30am, Room 430, Goldberg Computer Science Building) — PhD candidate Renata Dividino will give a “test talk” on her thesis, “Managing and Using Data Provenance in the Semantic Web,” which she will defend at the University of Koblenz, Germany, in December.

The university is closed for a religious feast of some sort. Right about now they prop those wooden magi up in the front yard of the university as well. 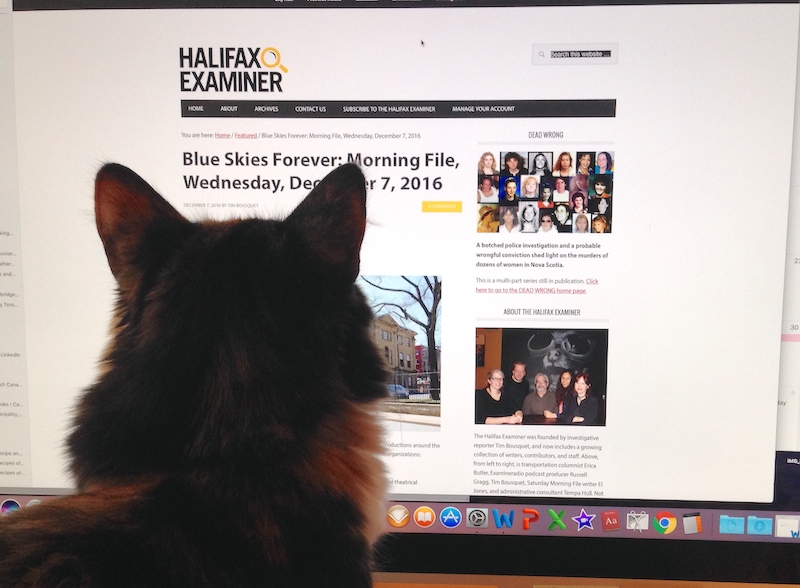 Piper the cat has a subscription to the Halifax Examiner.

You too can buy your pet, or your mother, or your friend, or your enemy, or a total stranger a gift subscription to the Halifax Examiner. And just in time for the holidays, anyone who buys a $100 gift subscription will receive a free T-shirt — give it as a stocking stuffer or be the stylish one yourself: 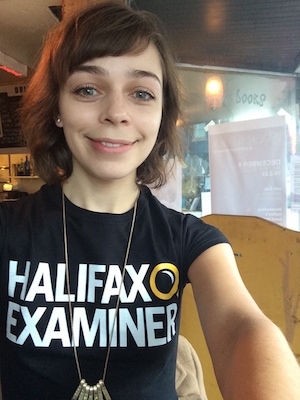 This is Hilary Beaumont. Send me a photo of yourself in an Examiner T-shirt and I’ll post it as well.

I just ordered a bunch more T-shirts, so they should all arrive in a week or so. If you’d like to buy a gift subscription, contact admin person extraordinaire Iris at iris “at” halifaxexaminer.ca.