I’ll have more on this later today… but councillor Gloria McCluskey has gotten herself into hot water.

This week, the Nova Star ferry issued a discount coupon for American tourists, offering them 20 hours on the rough seas of the North Atlantic and 20 minutes in Yarmouth, NS.

The big story involves 200,000 litres of diesel leaked into the environment courtesy of Metro Transit. The cleanup costs are estimated at close to $3 million, and so far nobody seems to be held responsible.

3. One is the loneliest number 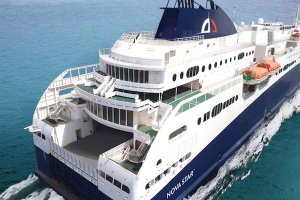 As of this morning, exactly one person has bought the Groupon coupon for the Portland to Yarmouth and back Nova Star trip, which includes 90 glorious minutes in Yarmouth.

Yarmouth Mayor Pam Mood should go to the boardwalk and congratulate that person for saving the economy of Nova Scotia in just 90 minutes.

Speaking of the Nova Star, the Chronicle Herald reports the completely unsurprising news that Maine Governor Paul LePage is backing off earlier statements that Maine would put up $5 million in financing for the ferry:

“The Governor never promised to provide money for the ferry, since he is not authorized to do so,” reads a statement sent Saturday by the governor’s communications director, Peter Steele. “But he was amenable to proposing a bill to the legislature for financial assistance for the ferry service.”

“Given the difficulty FAME (Finance Authority of Maine) has had in finding a commercial lending partner that would provide a loan to Nova Star, it is unlikely any legislator would sponsor a bill to put Maine taxpayers on the hook for a multimillion-dollar loan that may not get paid back. It is even more unlikely the full Legislature would vote to approve such a bill.”

Well, no shit. As I wrote in February:

There’s no way the Maine legislature will commit the money. Not in the face of recent layoffs at the Madison Paper Industries mill in Madison, Maine, which many Maine residents plausibly attribute to the Nova Scotia government’s extension of $125 million in subsidies to the Port Hawkesbury pulp mill. In the face of the Nova Scotian government subsidies for Port Hawkesbury, Madison simply can’t compete.

Turns out, the game of public subsidies has political consequences.

Cab driver Harry Richard says he wants “a public apology” for being arrested by Halifax police Saturday. According to a police news release:

On May 22, Officers responded to complaints of various robberies occurring at businesses throughout Halifax between 11:49 p.m. and 3:24 a.m. involving the same male suspect. The suspect entered three Subways, an Ultramar Service Station and a MacDonalds. The suspect demanded money from the clerks and obtained money from two of the Subways. No weapon was observed and none of the clerks were injured. Officers apprehended a 43-year-old man on Chebucto Road for committing the robberies. The robberies are still under investigation and the male suspect will be facing a number of robbery and attempt robbery charges. [emphasis added]

Richard had unwittingly ferried the robber around town, reports Metro:

“Initially he was a (call) on Inglis Street, and he wanted a taxi to go get a pack of smokes and come back home,” Richard said. 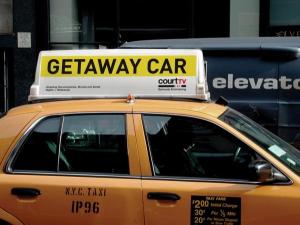 The man then asked Richard to take him to the Subway on Spring Garden Road, “so I’m guessing, as anybody else probably would, that they didn’t have the sub that he wanted there.”

The next stop was the McDonald’s on Quinpool Road, “so I’m guessing he changed his mind,” Richard said, and then they drove to a Needs Convenience store on Chebucto Road, where police officers arrested both driver and passenger.

“All I was doing was asking ‘Who’s gonna pay for what’s on the meter,’ and then all of a sudden they’re handcuffing me and taking me down,” Richard said.

Richard may regret that he’s drawn so much attention to himself. Now bylaw officers are aware that he was picking up passengers in violation of zone restrictions — his company, Bob’s Taxi, is licensed to pick up fares in Dartmouth, and not in Halifax. There is a weekend early morning exemption to the zone rule, but that only applies from midnight to 5am on Friday, Saturday, and Sunday mornings. 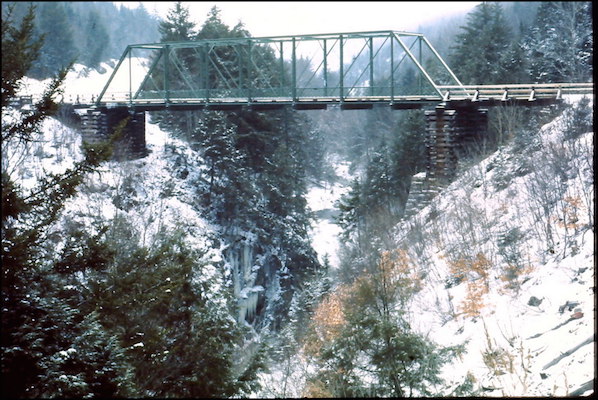 Stephen Archibald has photographs of 10 bridges around Nova Scotia:

The 1880s was the beginning of a great bridge building period in Nova Scotia and many of our iron bridges dated from this period (a guess they really are steel). One of the most picturesque of these truss bridges crossed a gorge near Londonderry, Colchester County. This photo [above] is from 1976; is the bridge still there?

Isn’t that a beautiful piece of engineering? The balance of elements under tension and compression. There were hundreds of similar bridges in the province.

2. Cecil Clarke doesn’t have a prayer

“Citizen gadfly Madeline Yakimchuk has turned up a memo from CBRM solicitor Demitri Kachafanas advising the mayor and council that continuing [to] include prayers at council meetings would defy the recent Supreme Court of Canada ruling and potentially expose the municipality to expensive litigation it would likely lose,” writes Parker Donham.

Read the full memo at the link — and it’s good to see there are sensible city solicitors in Cape Breton.

Says Donham: “That will be quite enough cheap grandstanding, Your Worship.” 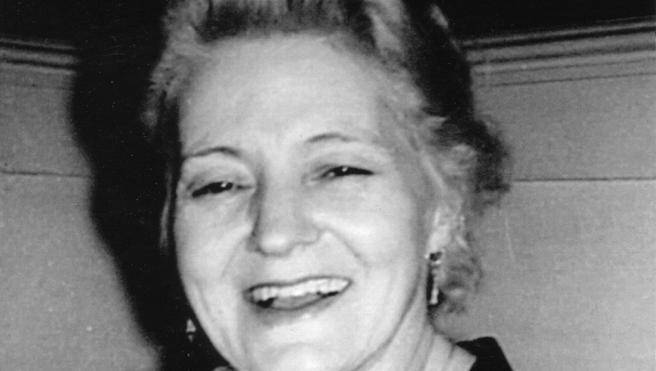 What makes her such a remarkable woman is that she became world-renowned for the brothels she ran in Halifax. And she did this while pursuing an incredibly fascinating and lucrative personal agenda.

Even more amazing about her is that, despite her criminal activities, surprisingly, she became well-respected by many powerful and also many “average” people such as taxi drivers and others who became well aware of her unusual enterprises.

Stephen Kimber actually read the 65-page report about the restorative justice for the former members of the Class of DDS 2015 Gentlemen Facebook group, and relates how the group (d)evolved:

It was, in fact, only one of three private groups — men’s, women’s and general — that students in the Class of 2015 created as they began their studies in September 2011. Initially suggested by a fourth-year student, the idea was to “share information, jokes, homework, and to bond and get to know each other.” (Why the bonding had to be gender-segregated isn’t clear.)

By third year, however, the “jovial tone” of the posts had morphed into something else. They became “accusatory, expressing frustration and … distrust of the faculty” as students vied for position in the highly competitive, academically critical Dalhousie Dental Clinic. One student (gender not identified) compared it to “surviving the Hunger Games.”

At this point, gender apparently became more significant. Some posts reference rumours of “sexually inappropriate relationships” between female students and male faculty, and suggest those students may have gotten “preferential treatment.” Frustrations, the report said, spilled over into other aspects of life, including the Facebook group. The worst jokes made light of sexual violence against female patients and fellow students.

The report also notes the discovery of “a private lounge where students scrawled graffiti — since painted over — of not only the ‘I-was-here’ variety but also of sexist and homophobic remarks.”

Many Nova Scotians must believe that there’s a provincial law obligating them to throw their trash out their car windows or to just drop it on the ground, regardless of how close they are to a garbage can.

I travelled across the country a few years ago and when I got to Victoria it struck me that, in all of the towns and cities that I’d stopped in along the way, there was little, if any, litter compared to what I see here.

Perhaps there’s a societal disconnect in Nova Scotia, leaving many people feeling as if they’re not part of their communities, and therefore not interested in keeping them clean.

Executive Standing Committee (10am, City Hall)—everything the committee will discuss is in camera.

North West Community Council (7pm, LWF Community Hall, Fall River)—the owners of the Inn on the Lake hotel in Fall River want to add a six-storey building to their complex. And the owners of Atlantic Playground on Lucasville Road want to expand, adding 10 new amusement rides and, showing great faith in the ultimate arrival of summer, seven new waterslides.

Back in 2004, when I was working in Arkansas, I interviewed Jim Bob Duggar.

Duggar was then launching a campaign for state Senate, I think, and was stopping, unannounced, at newsrooms around the state, expecting to be interviewed. My editor insisted that I interview him, so I did. I remember thinking, ah, he’s just another typical Republican, anti-tax, anti-abortion, anti-gay… well, actually, that describes the Democrats in Arkansas too. But then he broke out the photos of his absurdly large family — back then, he had “just” 14 kids — and the literature with his Christian beliefs…. it freaked me out, honestly. He had this smarmy smile that a lot of fundies have, I’m sure you know what I mean.

I thought he was just some weird wannabe in a field of more heavy-hitting Republicans and didn’t have a chance, and besides being freaked out by him, I didn’t think his politics were particularly noteworthy. I told my editor something along the lines of “why should I write an article about that asshole? Let him take out an ad,” and that was the end of it.

My brush with fame. 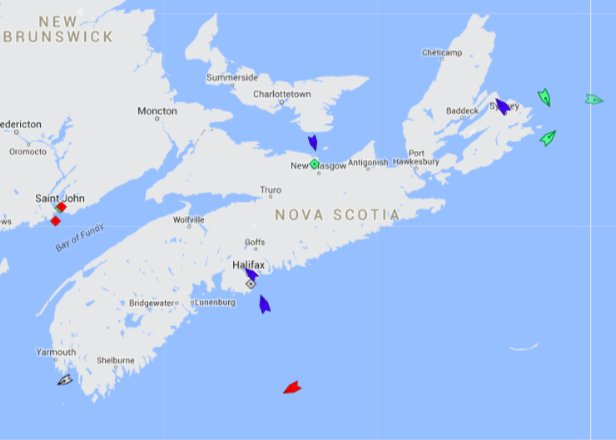 The seas around Nova Scotia, 7am Monday. Map: marinetraffic.com