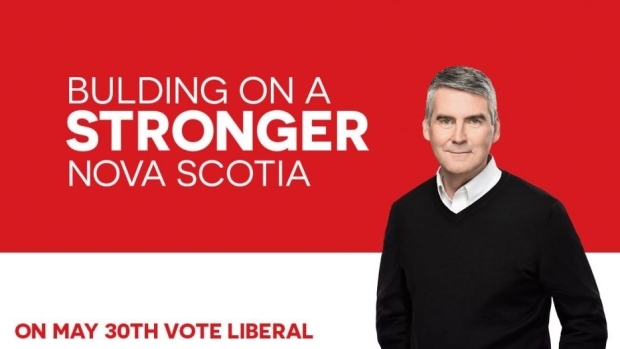 I stayed up last night trying to think of something intelligent to say about yesterday’s election call, but I don’t have much.

I guess it all boils down to whether voters will accept the provincial Liberals’ austerity policies (which contradict the federal Liberals’ rejection of same) — that is, will Nova Scotians really buy into the notion that if we were all paid less we’d all be richer?

Will people accept that if their public servants are paid less, somehow everyone else will have more money in their pockets? I wonder how that works, exactly: “Hmmm,” thinks random voter, “If customers of the place I work at have less money to buy stuff from this place, then maybe I’ll get a raise!” It makes no damned sense to me. It’s all a redirect, intended to split working people against each other so the plutocrats can take all the dough for themselves.

But I don’t read tea leaves, and don’t make election predictions. The voters will do whatever the voters will do, and I’m not going to be the fool who pretends to know what that will be.

I do have to think about what the Examiner’s election coverage will look like, and I’m open to suggestions.

It’s only been a day, so I can’t make any judgments about other media coverage, though I do notice a few things. I worry that an unbylined Canadian Press article about the three leaders places too much emphasis on leader personality and not enough on politics (I have an essay about the cult of personality in politics that I’ll write one day soon). On the other hand, Michael Gorman, reporting for the CBC, correctly contextualizes this election as a labour battle.

And then there’s the Chronicle Herald, once the paper of record. “The Chronicle Herald stumbled out of the gate yesterday with some woeful campaign coverage,” writes Scott Costen of the Queens County Citizen, an upstart news and commentary site:

An article by the Herald’s Fram Dinshaw demonstrated why local knowledge and professional newsrooms are so important.

The article stated that Masland “worked for 18 years as a staffer for the South Shore-St. Margaret’s federal riding.” (To be clear, Masland worked for the riding’s former Member of Parliament Gerald Keddy, not for the riding itself.)

Stephen Kimber is off to Cuba to work on a project related to his book, but chimes in about the Nova Scotian election:

This ultimately may be the real problem with our democracy: It is impossible for the average voter to believe anything any politician promises.

Click here to read Kimber’s piece, “Havana, Halifax and the state of democracy.” 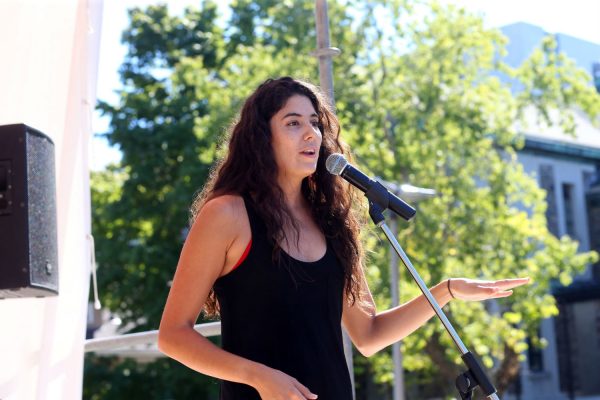 Rebecca Thomas, Halifax’s poet laureate, woke City Council with an electrifying poem she read in Chambers titled “Not Perfect.” The subsequent meeting saw a resolution passed to revisit the idea of renaming Cornwallis Street and removing the Cornwallis statue in, uh, Cornwallis Park.

Also, the Liberal government released a meaningless budget designed to “buld” (sic) on a stronger Nova Scotia while also announcing plans to set up an outpatient centre in the wilds of the Bayers Lake Industrial Park.

The Department of Fisheries and Oceans is looking for someone to count sharks:

The data on abundance and distribution of pelagic sharks is necessary to inform international management efforts through the International Conservation Council for Atlantic Tunas (ICCAT), national fisheries management, and conservation initiatives.

Such shark surveys have only been conducted twice before, in 2007 and 2009. In those surveys, commercial porbeagle (a mackeral shark) fishers agreed to allow DFO scientists to board their boats in return for an increase in their quota. Alas, reads the tender, “this is no longer possible as Porbeagle is considered to be endangered in Canada and the directed fishery has been closed since 2013.”

The solution is to place the shark counters on boats that are fishing for swordfish and other tunas. Some of the old porbeagle fishers are now swordfish fishers, which is helpful for this year’s survey because “the Contractor must be able to supply captains who are experienced in fishing pelagic longlines and/or captains who were previously license-holders in the directed Porbeagle fishery to ensure consistency and comparability of data being collected.” (Start the licence/license debate now.)

Counting sharks isn’t easy. The successful bidder will place DFO scientists on up to five separate boats which will survey sharks caught at up to 60 different locations, and 90 per cent of the sharks must be caught within a two-week period:

The survey area includes approximately 50 sampling stations distributed in a grid pattern across the Scotian Shelf, in the Gulf of St. Lawrence and off of southern Newfoundland.

Here’s an approximate map of the sampling stations: 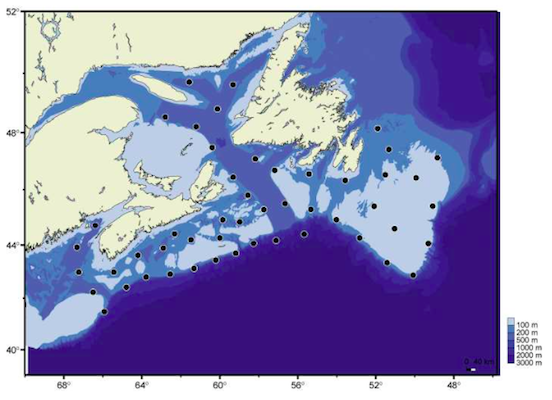 The boats will drop 600 hooks using regular shark fishing gear, which will then soak for three to six hours, using squid for bait. When the lines are pulled up, the DFO scientist will record details of the sharks caught, including species, length, and sex. Live sharks will be tagged and “returned to the water with the least amount of harm possible.” Dead sharks will be cut open and checked for “sexual maturity, vertebrae and stomach contents.” 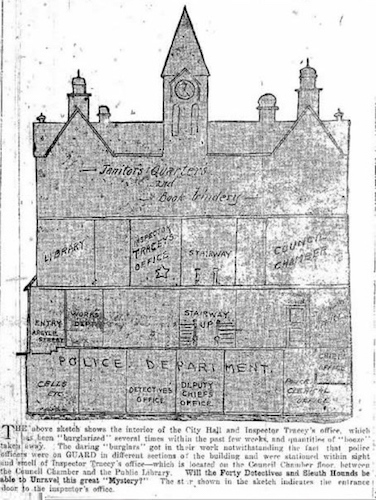 Katy Parsons, reporting for the CBC, discusses the “booze heist” from City Hall in the confusion and disruption during the days following The Explosion:

In the hours and days after the Halifax Explosion, confiscated alcohol went missing from city hall. It was during the era of prohibition and drinking alcohol would remain illegal in Nova Scotia until 1930.

The newspapers of the day accused city officials and elected representatives of stealing the booze.

Yep, more than a thousand had just died, thousands more were injured, an entire stretch of the city laid in ruin, and the reporters and politicians were worked up about… a few cases of booze. 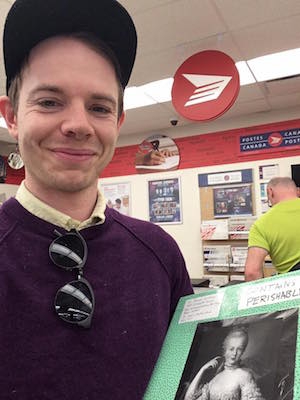 John Hutton mailing a peanut butter and jelly sandwich to Newfoundland. That’s a portrait of Marie Antoinette on the package. Photo: Facebook

“I just sent a peanut butter & jelly sandwich to Newfoundland by mail,” writes John Hutton on Facebook. “Why? Well, here’s the letter that went with it:”

To Dr. Noreen Golfman, vice-president and provost, Memorial University of Newfoundland and Labrador,

Hello. My name is John, and I’m a Nova Scotian alumni of Dalhousie University living in Montréal. I moved here, like many Nova Scotians, in pursuit of affordable education. Before doing so, I was quite active in my student and university community at Dalhousie. I write to you with concern, because not only have thousands of Nova Scotians moved to Newfoundland in pursuit of Memorial University’s lower tuition, but because Memorial has for a long time been an inspiration for many students, academics, policy-makers, and even administrators who support a universal, quality, public post-secondary education system. And yet, MUN seems to be hinting that their best asset should be discarded by raising fees.

At a recent town hall, some students raised concerns about administrators earning salaries worth hundreds of thousands of dollars, as well as expensing for meals costing upwards of $700 or more. While it is concerning that this lavish spending occurs while raising fees is proposed, also of concern is that your reply, Dr. Golfman, was “What do you expect us to eat, peanut butter and jelly sandwiches?”

Perhaps you’re familiar with Newfoundlands history. When people of your age and their parents were growing up in Atlantic Canadian fishing communities, lobster was actually considered a poor persons food and there was a sense of shame associated with being seen eating it. In fact, Atlantic Canadian children would try and trade their lobster sandwiches for peanut butter and jelly! As you work to bring Memorial back to a time when university was only for the rich, perhaps putting aside your lobster and caviar in favour of peanut butter and jelly sandwiches is a very appropriate idea.

2. Ghostly memories of the Chronicle Herald

Peter Duffy concludes his series recounting his time at the Chronicle Herald with Part 3 and Part 4. I haven’t read them yet, so don’t have anything to say about them except [snicker, ghost, snicker].

Getting Things Done: Evolution of the Built Environment in Vorarlberg (Monday, 9am, Exhibition Room, Medjuck Architecture Building) — On display until May 19, a touring exhibition showcasing the architecture of Vorarlberg, the westernmost province in Austria. It is curated by Wolfgang Fiel and sponsored by the Austrian Cultural Forum.

Pilot assignments as of 7am. 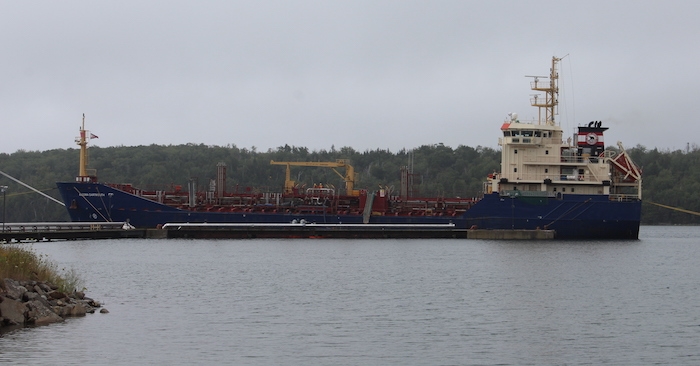 The guy who invented the tea kettle whistle was named Jorgen Madsen.