You are here: Home / Featured / Old people in prisons are facing a COVID-19 “death sentence” 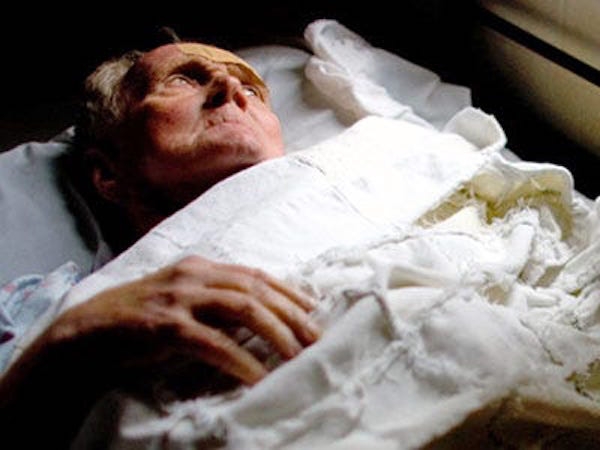 Since COVID-19 arrived in Canada, Mary’s phone has become a source of dread.

When it doesn’t ring, she’s on edge, thinking the worst for her elderly father.

But when she does get a call, she fears it’ll be the one where someone from Joyceville Institution in Ontario, where her father is currently in prison, tells her he’s succumbed to the virus.

Mary — the Halifax Examiner has agreed not to use her full name, as her extended family doesn’t know about her father’s conviction — is one of the family members and advocates concerned with the threat COVID-19 is posing to a subset of Canada’s already at-risk prison population.

Canada’s public health agency has warned older adults, i.e. anyone over 65, to take extra precautions to guard against their increased vulnerability to COVID-19.

But roughly 25% of Canada’s federal inmate population is part of this vulnerable group — and unlike those in the community, they have few options to protect themselves.

Due to conditions in prisons and jails, and the traumatic backgrounds of many incarcerated people, an ‘older adult’ in this context means anyone over 50.

In prisons, practicing physical distancing is all but impossible; in Mary’s case, she said her 72-year-old father has told her that his range is more crowded than usual, since prisoners who were previously away on programs are now back (all programming, as well as any additional health services like counseling or dental appointments have been suspended).

Meanwhile, Mary said her father was one of a group of inmates over 65 who were given instruction on proper handwashing technique, in recognition of their vulnerability.

But with soap and hand sanitizer in short supply — hand sanitizer dispensers are frequently empty, according to another inmate at Joyceville, who asked not to be named for fear of retaliation from the institution — putting those hygiene recommendations in place is difficult.

“They don’t have any hand sanitizers there, somebody stole his body wash from the shower,” said Mary. “They’re saying to people to wash their hands frequently, but if you don’t have those items, how are you supposed to access that?”

Adelina Iftene, a professor at Dalhousie’s Schulich School of Law and author of Punished for Aging: Vulnerability, Rights, and Access to Justice in Canadian Penitentiaries, said the infrastructure of prisons doesn’t allow for control of the spread of disease, and that the blunt tools institutions are using — such as suspending visits and confining inmates to their cells — are unsustainable for the likely length of the social-distancing period.

“Lockdowns, even in moderation, are bad, let alone, you know, locking them up for months, from now on. That cannot possibly be a solution.”

Meanwhile, on top of their age, older prisoners have even greater health issues than older adults in the community.

“It’s a concern because we know these individuals are hardly receiving care, even for the many co-morbidities that they have. So the expectation is that they’re going to be very significantly impacted by COVID-19.”

Older prisoners aren’t the only ones with dangerous health conditions; Iftene said the prison population as a whole has much higher rates of diseases that significantly increase their risk, such as HIV and Hep C.

Prisons are already ill-equipped to handle these sorts of complex health needs, Iftene said, which doesn’t augur well for the system’s ability to cope with COVID-19.

“I don’t think it’s exaggerating to say that as it enters prisons, it’s going to become a death sentence for a lot of people.”

The Correctional Service of Canada said in an emailed statement that it’s taken measures to prevent the spread of COVID-19 in its institutions, including hygiene measures such as disinfecting common areas and high-contact services and educating staff and prisoners about “the importance of good hygiene practices.”

These concerns aren’t confined to the federal level.

As of late last week, Emma Halpern, executive director of the Elizabeth Fry Society of Mainland Nova Scotia, said there were still a significant number of people at increased risk, due to their age or pre-existing conditions, in Nova Scotia institutions, including “a woman who is a senior citizen with quite complex health issues…and now she’s sitting in [Burnside] with the fear of COVID-19.”

Nonetheless, Halpern said the province has made progress in releasing some people into the community. (See “Clearing out the jails” and “Nova Scotia’s Director of Correctional Services suggests that being in jail is safer than being in the broader community. That’s just false.”)

With federal institutions, however, there’s yet to be any movement, she said, despite Public Safety Minister Bill Blair’s request on Tuesday for CSC and the Parole Board to consider releasing some people early.

Advocacy groups such as the John Howard Society and Canada’s Correctional Investigator have also called for the release of vulnerable prisoners, including the elderly and those with chronic illnesses.

In many ways, the delay is hardly surprising; Halpern said the current situation is highlighting just how great the gaps are both provincially and federally when it comes to supporting people through the release process.

“So when we have to act quickly, in a time like this, and move a large number of people out quickly, our processes aren’t there to make that happen and so we’re floundering right now. That to me is a big, big gap.”

CSC said in a statement that it’s working with the Parole Board to examine options for the release of offenders, and is conducting an analysis of the offender population “to be in a position to make evidence-based recommendations.”

But for Mary, whose father started his 30-month sentence in January — meaning day parole eligibility is months away, and full parole an even longer wait — the rationale for keeping her father in prison, when he could serve his sentence at home with her for as long as the crisis lasts (another recommendation by advocacy groups) is incomprehensible.

“At a time like this, I just can’t see how anybody is benefitting from him being incarcerated,” she said.

“Put that restriction on him, have him stay in the house, but at least we know he’s safe. Where he is now he’s just a number and a criminal, so I truly don’t believe they care what happens to them.”

For now, though, all she can do is wait for a call she hopes never comes.

“I feel so helpless. It’s terrible.”