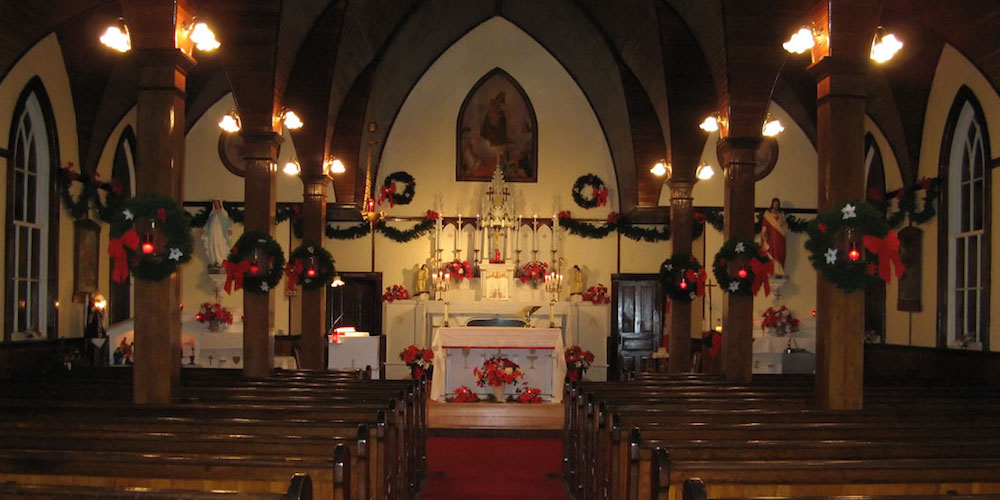 The interior of Our Lady of Mount Carmel Church. Photo by Barry Coolen, via Nathaniel Smith’s site, http://prospectvillage.ca.

Today, July 16, is the patronal feast of the parish of Our Lady of Mount Carmel, the date decreed by the Bishop of Halifax as the day of celebration for the parish church in Prospect. The parish has had a church in Prospect for 220 years, but no longer: Today, July 16, 2014, is the day the town closes the church for good.  One more mass will be said, and parishioners will for the last time sit as a community in the building

Tomorrow, the Archdiocese of Halifax-Yarmouth will list the property, which includes a large church building built in 1922 and the adjacent Hall built in 1926, for sale, leaving the fate of the community that surrounds these structures to the whims of developers.

Prospect is about 20 km outside of Halifax on the Western shore of the Chebucto Peninsula. Today it is known for its quiet, idyllic nature and for its beautiful and scenic walking trails. However, over the last 260 years the community has played an important role in the economic, political, and religious history of Halifax and Nova Scotia. The church has influenced the history of this small village throughout most of its history.

Churches are closing across rural Nova Scotia due to declining congregations, which are unable to pay the cost of operating large, drafty old buildings. The Catholic Archdiocese of Halifax-yarmouth has embarked on an extensive consolidation exercise that sees congregations brought together in one building at the cost of all others. (Even the two archdioceses, Halifax and Yarmouth, were consolidated a couple of years ago.) But the church at Prospect is an especially unfortunate loss.

The parish of Prospect, renamed Our Lady of Mount Carmel in 1852, was founded amongst the barren rocks of the western shore in 1794, making it the second oldest Catholic parish in the history of the province, post-Acadian era. Prospect was chosen as the seat of the parish due to its relative geographic proximity to Halifax and the fact that the parish itself stretched along the entire coast of Nova Scotia from Sherbrooke to Liverpool and as far inland as Dalhousie north of modern New Ross. Visits to the far-flung communities were irregular; the main reach of the priest at Prospect was to the surrounding Catholic communities of Ketch Harbour, Herring Cove, Sambro, Shad Bay, Lower Prospect and Dover.

When visiting the parish, and specifically the village of Prospect, in 1815 Bishop Plessis of Quebec, who had administrative jurisdiction over Nova Scotia at the time, described quite vividly the religious community he found:

When we arrived the first thing we saw were the houses of this village. A most horrible place in the world, you see nothing, absolutely nothing but a pile of naked rocks, separated from each other by inlets that make many small islands, with two houses on one, five on the other, and none at all on most. After having long winds through many of these islands, you think you have finally made land. Not at all. There is another island, and then another, and all the same ground, on the rock is discovered that you can grow potatoes, grassland animal or even plant stakes to surround a garden. It seems that in such a place, we should send convicted criminals to death whose sentences would have them commuted into exile. However, it does not, instead it is lived in by up to 40 Irish families, free and attracted to the abundance of fishing.” (rough translation of the original french).

The residents of Prospect, despite the desolate conditions described by Plessis, managed to create a viable community on those naked rocks. From the beginning of the community in the late 1750s the church, and religion, have played an important role in its history. Nowhere is this more evident than in the activities of the early Catholic community based in Halifax to repeal the Penal Laws and gain the ability to build their own place of worship. The Penal Laws were a series of laws established to uphold the supremacy of the Church of England against nonconformists and Catholicism. These laws limited basic rights such as the right to own land and to worship freely.

A good number of the men who were involved in the early political activities to repeal the Penal Laws in Nova Scotia were residents of Prospect—John Cody, William Meany, and Dennis Meagher all owned licenses to occupy islands at Prospect and ran large scale fishing operations from the islands between the late 1760s and the 1790s. Though these men spent half of their year in Halifax they were functionally the first settlers of Prospect. In 1784 they successfully petitioned the provincial government for the repeal of the Penal Laws and went on to support the construction of St. Peters (later St. Mary’s) Church at Halifax the following year.

The community of Prospect prospered in the middle part of the 19th century and grew considerably, supplying salt and ice to the fishing fleets along the shore and from communities in New England. So prosperous was the community that in 1852 it built a new church. Writing in 1929, parish priest John Lanigan described the new church as follows:

It was a pretty and well-appointed church, its becomingly adapted architecture putting it in a striking contrast to the unpretentious appearance of the first Catholic church on the western shore. It was God’s new home in Prospect. Built to seat nearly five-hundred persons, there it stood, the day it was blessed, an imposing structure on elevated land, facing and commanding as it were, the broad Atlantic, with its stately spire pointing heavenwards – homewards – as if silently saying: “Glory to God in the highest”; and indeed, it was the source of great joy, consolation and peace to those souls of good will who faithfully laboured for its erection. It was a great reward for their perseverance; it was a beautiful memorial to the propagation of the faith.”

Despite the successes of the community economically during this period, it began to fall on hard times throughout the 1860s and 1870s and younger residents began to leave to take work in Halifax and farther, to Boston, New York, and throughout New England. However, the village rebounded after 1879 due to the high tariffs of the National Policy, and the population balloon to nearly 1000 people in the 1890s. The village had stores, bars and dance halls. There were as many as 40 tall ships in the harbour at the peak of fishing season, as local merchants supplied ice for the long sail back to New England. Some of the local merchants would today be described as upper middle class; they renovated their homes and purchased fine furniture. Though the village protected its image as an idyllic fishing village, Prospect kept pace with and joined in the industrial revolution. In 1892 William B. Christian died due to blood poising after pricking his finger on the edge of a tin can at his lobster factory—one of the most advanced and mechanized plants along the shore, which operated for many decades.

When Prospect was founded residents could not afford to hire a teacher, but with the prosperity by the economic uptick of the 1840s, retained one. In 1876, the Catholic Sisters of Charity opened a convent in the village, and the nuns oversaw the administration and teaching at the Prospect School until 1958. That year, the school was closed as part of the rural school consolidation policies of the provincial government. Prospect students then went to a new elementary school in Shad Bay. High school-aged students went to Halifax West Municipal High School, which took in all children from Hubbards to Bedford to Fairview.

On October 17, 1921 the 69-year-old church burned down. By this time, many villagers had moved on to Halifax and elsewhere, and the remaining population wasn’t able to finance construction of a new church. It looked like the end of church and its role as the social heart of the community. But former residents living in Halifax began to raise money—the family of Patrick Power (Halifax’s first Member of Parliament); Senator Nicholas Power (prominent lawyer and son of Patrick); the Cragg family, who owned hardware stores and eventually built the old Birk’s Building on the corner of Barrington and George Street; and others who were either born in or came from Prospect.

So successful was the fundraising efforts—and the sense of community and belonging—that enough money was raised to rebuild the church. In 1932 a new bell was purchased for the church by the wife of John Power, known locally in baseball circles as Shorty Power. The connection was strong.

Like many villages in rural Nova Scotia, as Prospect’s population declined, it lost services, which led to still more decline in population. As mentioned, the school was closed in 1958. The Post Office, which had operated since the 1840s, was closed in the late 1980s and replaced by a community mail box. The 1990s saw the divestiture of the government wharf (which was purchased by a local community group). Over the years the local grocery and stores have closed and, most importantly, the last fisherman cast his nets. Yet despite the closure of all of these important social and community institutions, the village has survived.

In 1994 villagers celebrated the 200th anniversary of the parish. They reflected on where they had come and where they were going. But despite the celebrations, the congregation shrank, and the slow death of the church community had begun. Twenty years later the script has played out and the church is closing.

In the past the community that has grown around the church at Prospect has picked itself up and moved on. It’s hard to imagine the village without the church and it is hoped that whoever purchases the building recognizes and appreciates the importance that building has played in the beauty of the surrounding community.

In Prospect today there are fewer than 50 people who descend from the original settlers. Most of the residents are new to the area and as HRM expands the community will continue to change. With the removal of the last great institution in the community it’s going to be up to groups like the Prospect Peninsula Residents Association (PPRA) to keep the community going. The PPRA has made use of the Church Hall for many years, hosting an annual lobster dinner and also a small lending library. The local theatre group, The Prospect Players, has been performing from the stage in the Hall as well. It has yet to be seen whether these groups will be able to buy the building or whether the Archdiocese will sell the buildings at market value, which likely means out pricing local groups.

Our Lady of Mount Carmel is predeceased by its offspring churches St. Thomas’s Church of East Dover, which was closed in 2013 and sold earlier this year, and St. Peter’s Church in Lower Prospect, which was blown over in a gale in 1924 and not rebuilt. Our Lady of Mount Carmel is survived, for now, by St. Joseph’s in Shad Bay, St. Timothy’s in Hatchet Lake, and Star of the Sea Church in Terence Bay.

Nathaniel Smith grew up in Prospect and his family has worshiped at a church in Prospect for over 220 years. He was baptized at the church but is not now a practicing Catholic. He has operated the Prospect Genealogical Wesbsite, found at prospectvillage.ca,  for the last 15 years.