Vanessa Fells is the programming and outreach co-ordinator for the Black Loyalist Heritage Society.

This weekend, Fells was at a Black Educators Association professional development event when a young African Nova Scotian student shared with her the following picture from the Early Childhood Education class at the Nova Scotia Community College Burridge campus in Yarmouth: 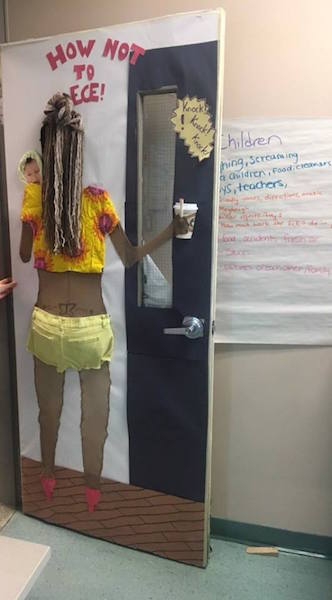 The picture, depicting “how not to ECE (early childhood educate)” depicts a woman with dark skin and box braids wearing a crop top, “booty shorts,” and heels and holding a baby (who appears to be white).

The image is coded with negative stereotypes associated with Black women. Besides the visibly dark skin, the woman sports a hairstyle associated with Black women. Chosen as the example of who not to be, the Black appearance of the woman is accompanied by clothing commonly stigmatized as “ghetto” or “ratchet” (words used by commentators in describing the image that associate race with lack of respectability).

“When I saw the photo I was enraged at how a class would think this was appropriate way to depict Black women as early childhood educators,” says Fells.

This picture plays into the stereotypes that Black women are “tramps,” who dress provocatively, look like “hookers,” smoke, drink and, as the heading states, are “how not to be an early childhood educator.” 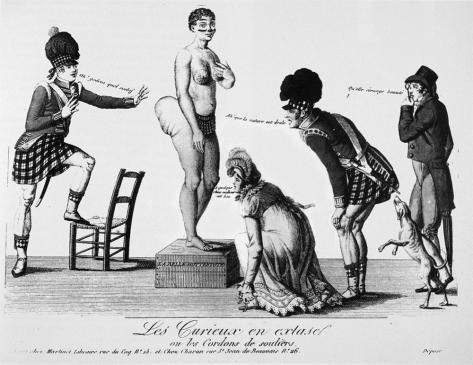 Fells, who works with schools and government and community organizations to teach the story of the Black Loyalists, has developed programs to “help dispel the myths and stereotypes about the Black community.” She provides diversity and cultural competency training, and hold seminars with students discussing issues of race and racism.

In this work, Fells is familiar with the damaging impact that racist stereotypes have on the self-esteem and achievement of Black youth, and with the persistence of these negative perceptions of Black people among staff and education officials.

Patricia Hill Collins identifies what she calls the four “controlling images” of Black womanhood.  These images of the Matriarch and the Welfare Mother cast Black women’s mothering as dysfunctional, and Black women’s fertility as  threatening. Along with these images is that of the “Jezebel.” As Hill Collins writes:

Jezebel’s function was to relegate all Black women to the category of sexually aggressive women, thus providing a powerful rationale for the widespread sexual assaults by white men typically reported by Black slave women.

Yet Jezebel served another function. If Black slave women could be portrayed as having excessive sexual appetites, then increased fertility should be the expected outcome. By suppressing the nurturing that African American women might give their own children which would strengthen Black family networks, and by forcing Black women to work in the field or “wet nurse” white children, slaveowners effectively tied the controlling images of Jezebel and Mammy to the economic exploitation inherent in the institution of slavery

…Each image transmits clear messages about the proper links among female sexuality, fertility, and Black women’s roles in the political economy. 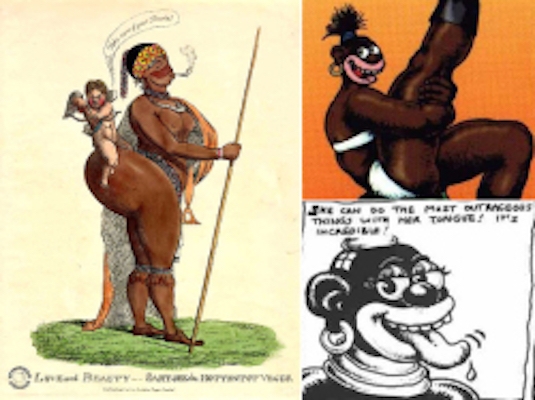 That the image of a Black woman comes to mind when picturing how “not to” nurture young children speaks directly to the stereotypes around Black women’s sexuality and mothering. Fells points out:

This also speaks to how others see our community and the way we raise our children.

Racism like this is why our students drop out of school. It speaks to a larger issue of racism in the education system that needs to be addressed.

Following a meeting with the principal of the NSCC campus on Monday morning, Fells posted the image on Facebook, accompanied by text that read, in part:

How did the instructors walk past this everyday for a week and say nothing about it before it was taken down? Why are these instructors not fired and the students not expelled? I am pissed that any person especially our Black Students would have to endure such racism. NSCCs all over the province need to be put on notice that we as an African Nova Scotian Community will NOT tolerate this racism or your excuses. Re- share far and wide I want the world t0 know about this!!!

In the thread under the picture, many people shared Fells’ anger and disgust at the image. Many others, particularly white people, argued that the image wasn’t racist, that it didn’t depict a Black woman, that it wasn’t a big deal, and that they themselves are colourblind.

Fells argues that images like this represent broader issues with the education system:

I spoke out because our youth are suffering with systemic and in this case blatant racism in the education system. If our youth don’t have their community to support them and fight for them when things like that happen then they won’t make it. The two young Black women want to become Black teachers. How are they going to get there if they have to endure racism like this? If we don’t fight for them, who will?

Studies from the United States show that Black girls are disciplined at rates up to 10 times higher than girls of other races. Black girls face discipline for their hairstyles, including being punished for wearing box braids, the style depicted in the representation at the NSCC. Black hair is variously seen as dirty, uncontrolled, unprofessional, untidy, militant, distracting to other students, unruly, and generally threatening to white people. 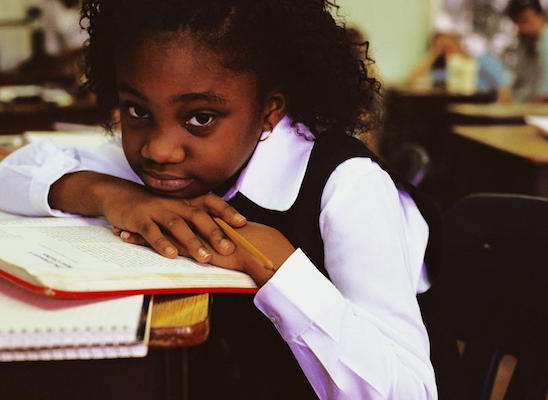 While statistics on Black girls are (as usual) hard to find in Canada, Black girls are similarly criminalized in the classroom. In 2016, a six-year-old Black girl was handcuffed by two police officers called to her school in Mississauga. In Nova Scotia, Black students are disproportionately placed on IPPs (Individual Program Plans) streaming them out of the classroom and preventing access to higher education.

Other studies show that teachers communicate with parents based on racial stereotypes. Rather than identifying systemic racism as the reason for Black children’s marginalization in education, teachers, school officials and politicians consistently blame Black parenting.

The stereotypes consciously or unconsciously drawn on in the image of the “bad” childhood educator are not harmless. They represent ideas about Black parenting and Black behaviour that directly affect how Black children experience the school system. The very fact that educators could see this image and not recognize the racism inherent in this image demonstrates exactly why so many teachers then carry racial bias into the classroom.

The danger of this image lies not only in its creation, but also in the number of people on Fells’ Facebook thread who claimed the image wasn’t racist and that people were taking offence over nothing. That some of those people may be soon in contact with Black pre-schoolers is worrying.

It is not surprising that images like this one are so normalized that a Black woman comes to mind to illustrate how “not to” educate, and that this kind of degrading imagery of Black women is accepted. When Michelle Obama is called an “ape in heels,” and Serena Williams is drawn like a gorilla, even the most famous, richest, highest-achieving Black women are not immune from racist, dehumanizing commentary. 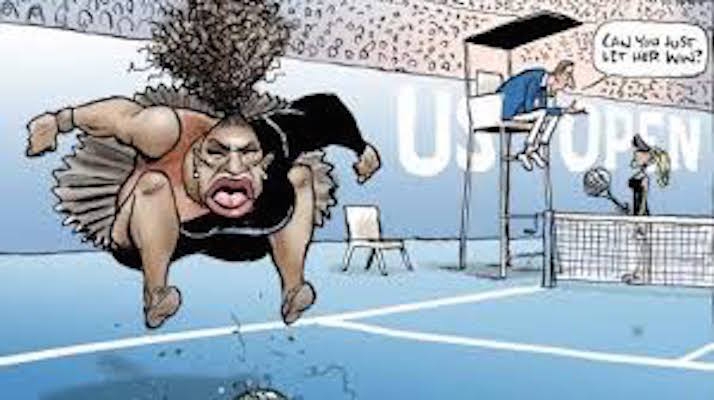 Image by Mark Knight of the Herald Sun.

It is precisely because this kind of depiction of Black women is so common that this imagery becomes invisible, and can grace the hallways of a place of higher education. It doesn’t have to be the case that whoever created this image did so with the intent of harming Black women or that they necessarily recognized the racial stereotypes underlying this representation. Focusing discussion on whether the person who made is “is racist” rather than why this imagery persists and its effect of Black people ignores the systemic issues Fells identifies that affect how Black people are treated in schools and in wider society.

Note: I called the principal of the campus at the end of the day on Monday when I saw the post on Facebook. At that time, I wanted to speak with her as a community member, and wasn’t planning on writing an article. The Halifax Examiner will update with any comment from NSCC.