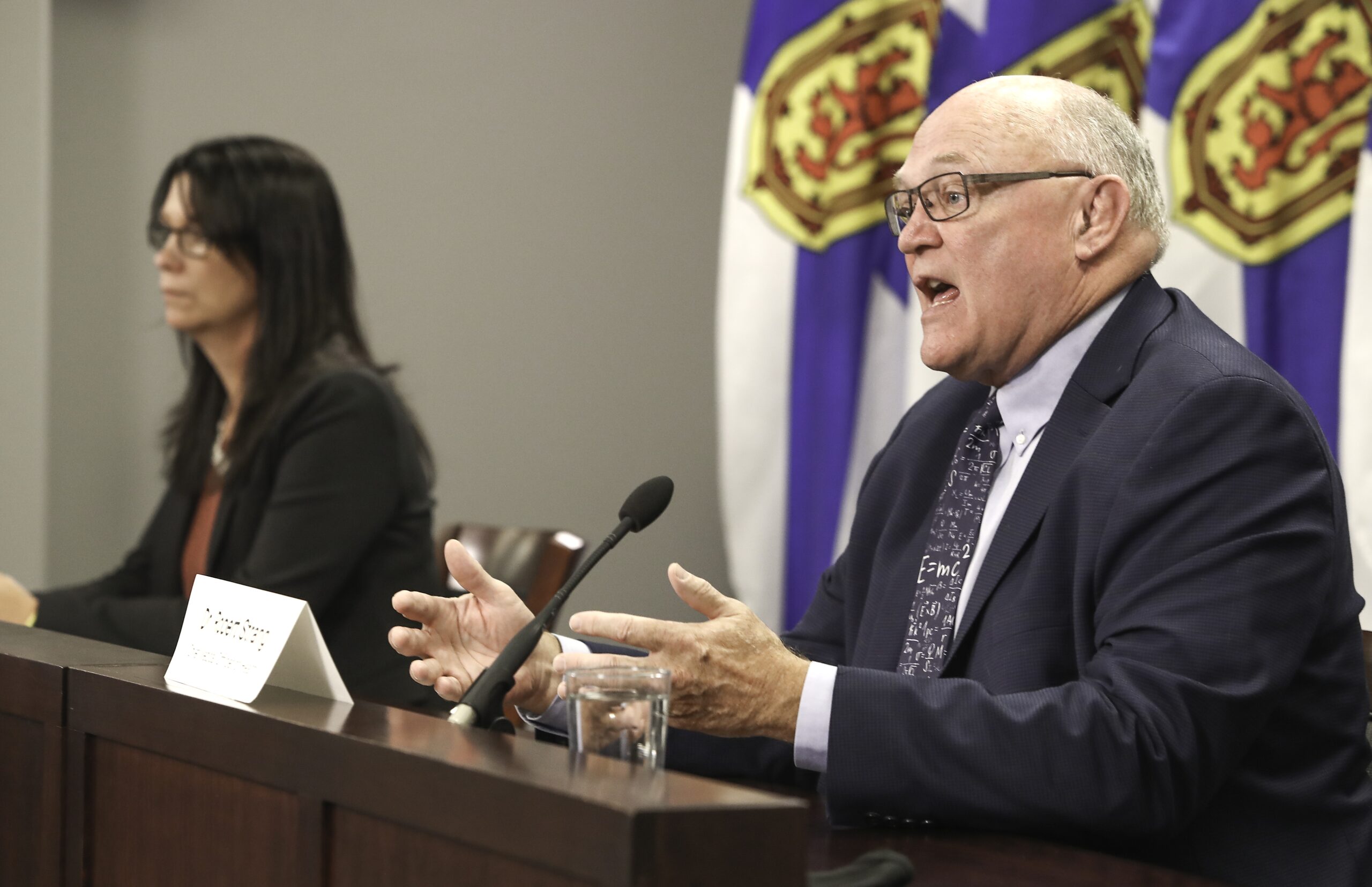 With files from Jennifer Henderson and Joan Baxter.

Nova Scotia is delaying the start of Phase 5 of the reopening.

Phase 5 — the removal of nearly all COVID restrictions — was to start tomorrow but due to a large outbreak of the disease in the Northfield area and a lesser outbreak in the Halifax area, the start of Phase 5 is being pushed back to October 4.

That’s also the date that Nova Scotia’s “proof of vaccination” requirement becomes effective for attending all non-essential events like bars, restaurants gyms, and so forth.

Sixty-one of the new cases are in Nova Scotia Health’s Northern Zone — 59 are close contacts of previously reported cases, and two are related to travel.

According to the Department of Health: “There is a large cluster of linked cases in a defined group in Northern Zone. Most of the group is unvaccinated, so more cases are expected.”

Franklin Isaac, a deacon with the Mennonite Church of God in Christ located 10 kilometres east of Tatamagouche at Brule, acknowledged that since yesterday when Public Health indicated there were more than 50 new cases connected to an unvaccinated group in the Northern Health zone, rumours had been swirling around Mennonite communities located in Colchester, Pictou, and East Hants counties.

“COVID is not directly affecting us; it is at the Northfield group,” Isaac told the Examiner. “The Northern health zone is big. It’s too bad if people are hearing and thinking the outbreak is on the Shore.”

Isaac said although both  Northfield and Brule are conservative Mennonite communities, the two belong to different branches of the faith.

A person from the Northfield community agreed to speak with the Examiner, but only if we didn’t name him. He confirmed that many in the community had contracted COVID, but many have also recovered.

Another person from the community spoke with the Examiner on the record, but we are not using his name as it would identify his father, who was hospitalized. He is relieved that his father has since recovered. Asked if this outbreak might encourage some people in the religious community to get vaccinated, he replied, “It’s possible.”

Many people in the Mennonite community rely on selling their produce at farmers markets around the province, and the outbreak will affect sales just as the harvest comes on. The Mennonite booths have been cancelled at several markets.

At a COVID briefing today, Strang would not name the community, but said the community has been cooperating with Public Health.

Some 32 people under 19 years old are among today’s new cases, 28 of whom are in the Northern Zone. I asked Strang how many of those 32 are connected to schools, and he said none are.

There are also five new cases in the Central Zone — 3 are close contacts of previously reported cases, and 2 are related to travel. Again, according to the Department of Health: “There are signs of community spread among those in Central Zone aged 20 to 40 who are unvaccinated and participating in social activities.” That said, only one of the five new cases are in the 20-39 age cohort (the other four are 19 or younger).

There are now 173 known active cases in the province. Four people are in hospital with the disease, but not in ICU. Eighteen people are considered newly recovered, which means they are no longer contagious and not necessarily that they aren’t sick.

“I’m not comfortable moving into Phase 5 just yet,” said Strang, explaining the postponement. “It is far better to wait until we’re ready to implement our proof of vaccine policy. This means that when we loosen restrictions to allow larger gatherings, our new policy will be in place to allow these gatherings to happen as safely as possible. It would also give us time to understand the current clusters and monitor for any spread.”

Strang laid out the details of the new policy:

There are still some details to be finalized, including things like the process for people who can’t get vaccine for valid medical reasons. And we’re working on this and we’ll share this as we put final things in place.

But for now, I can tell you where the policy will and will not apply. And then, generally speaking, it will apply to places where groups of people gather together for discretionary activities. So starting October 4th, people who are 12 years of of age and older will need to provide proof of vaccination to participate in the following events — and this policy does apply to both indoor and outdoor activities: bars, casinos, and full service restaurants (but not at restaurants whose primary business model is fast food or takeout or drive through), at fitness, recreation and leisure businesses and facilities at social events, festivals, performances and special events — unless they are special events outdoors in a public space where there is no specific entry point…

The policy will apply for people attending as well as people participating in sports events. It applies to people going to museums, public libraries, and the Art Gallery of Nova Scotia. It applies for weddings, funerals, receptions, and visitations that are being held by a recognized business or organization. If it’s for instance, just a simple small family wedding in a backyard, and then the proof of vaccination does not apply. But if it’s held by a recognized business organization, then it does apply.

Rental accommodation such as hotels, motels, faith services, school-based activities that take place during the school day, before and after school programs and on school busses.

And, as I said, informal gatherings at a private residence.

Any of the businesses and organizations that offer these services or activities certainly can have their own vaccine vaccination policies.

It’s also been decided that proof of vaccination will not be required under this provincial policy for employees of businesses and organizations that offer the events and activities that I listed above. However, businesses and organizations are encouraged to set their own vaccination policies, taking legal and ethical implications into consideration.

And finally, I’ll note that we have a grace period for children who have turned or are turning 12. If they have turned 12 between January 1st and October 4th of 2021, they will have until December 31st to attend events and activities without requiring proof of vaccination. And it gives them time to get vaccinated for children who turn who will turn 12 on October 4th or afterwards; they will have three months from their birthday that they will have to get vaccinated and they’ll be able to access events without proof of vaccination in that three month period. 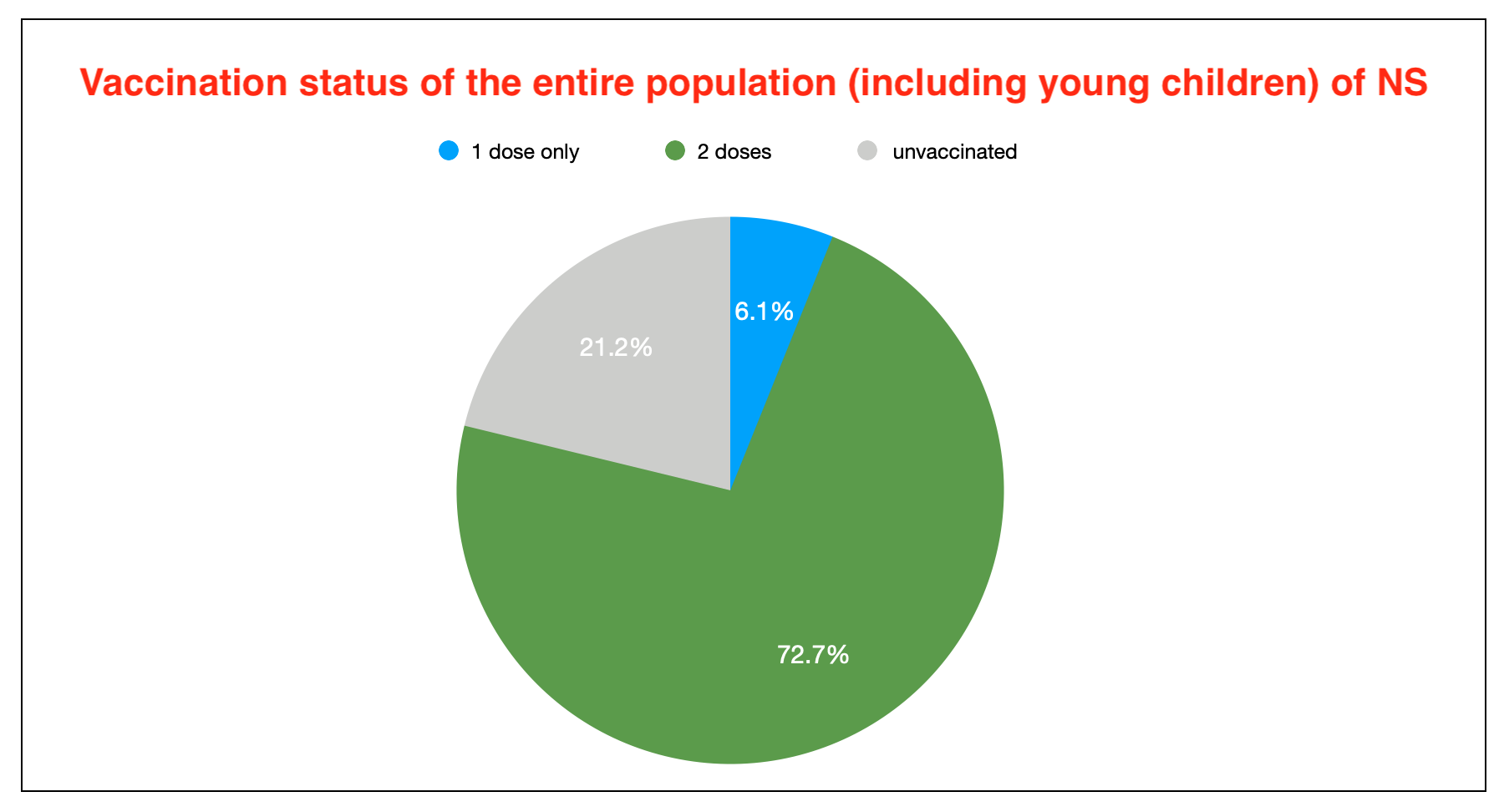 However, the approximately 8,000 military personnel stationed in Nova Scotia were vaccinated through the military’s vaccination program and are not included in the above percentages; if they are included, then the double-dosed percentage increases to 73.5% of the entire population.

For Nova Scotia to reach 75% of the entire population having received two doses of vaccine, 14,300 people would need to get their second dose today. That is, well unlikely. I asked Strang about this today and he deflected the question:

Bousquet: With respect, the 75% target was called a hard target. We ran the numbers that the province itself puts out, and there was no realistic chance that 75% would be reached by tomorrow. And that includes the military that you keep looking for. Anyone can do the math. It’s there. How can you claim that we’ve hit 75%?

Strang: We’re going to be very close to 75% by tomorrow. Given the appointments we have booked in our system. That may change every day. If a bunch of people who are booked don’t show up, then it changes every day, fluctuates here and there. We have about 2% of people that military now [for the record, 8,000 military personnel is 0.82% of the population] and others that are not directly entry into our system, cannot be reported as part of our numbers. So will be at or very close —  less than a percentage point [away from ] 75% by the 15th.

But I’ll make the point again, that is not the reason we are delaying moving from Phase 4 to Phase 5. Everything we do throughout the pandemic ultimately depends on the epidemiology, and sometimes that can change very quickly and it has so therefore we will still be at our 75% target. But it’s insufficient given the epidemiology. We also we have to now delay for two and a half weeks so we can align, as I said, opening up gatherings to where vaccination policy, because we’re in the middle of the fourth wave, we, it has to be vaccinated people only that we allow to get together in larger numbers.

I asked many weeks ago if they could separate 0-11 (unvaccinated) and 12-19 (highly vaccinated), but it appears that isn’t going to happen.

Nova Scotia Health labs completed 2,543 PCR tests yesterday. This does not include the antigen tests administered by the pop-up testing sties, or those conducted at home.