Peter Kempton is the 58-year-old auto mechanic who died last year in an explosion at Your Mechanic Auto Corner in Westphal. The incident never seemed fully explained, and there are two new reports that say it is still being actively investigated.

CBC reports that before the incident, Your Mechanic Auto Corner was the subject of repeated HRM bylaw compliance issues, “dozens of times to enforce orders under the Dangerous or Unsightly Premises bylaw.” Having trashy premises could speak to a sloppy attitude about business that might also be expressed in not explicitly following workplace safety rules, but that’s still a matter to be determined.

The Chronicle Herald, however, gets to the meat of the subject with its report today. Reporter Davene Jeffrey tells us that

Kempton is believed to have been using an acetylene torch to remove a gas tank from the van, when it went up in flames.

Elie Hoyeck, the owner of Your Mechanic Auto Corner, has two other repair shop locations that have recently been inspected by the Labour Department, reports Jeffrey, and several compliance orders were issued. Alarmingly:

Only one ordering that a safe welding plan be put in place was not complied with immediately.

Just when you think this is a story about a sloppy business person taking too many shortcuts around safety rules, it veers off into crazy land:

He claimed to have developed a chemical process to extract hydrogen from the water and once mixed with gasoline, a vehicle could run a long ways while burning very little gas.

The More Than Buses group last night released its ideas for a revamp of Metro Transit scheduling and routing. Metro was there, but gives no details of the plan. I had other responsibilities last night so wasn’t there for the unveiling, but I hope to get a copy of the plan and say something about it later today. 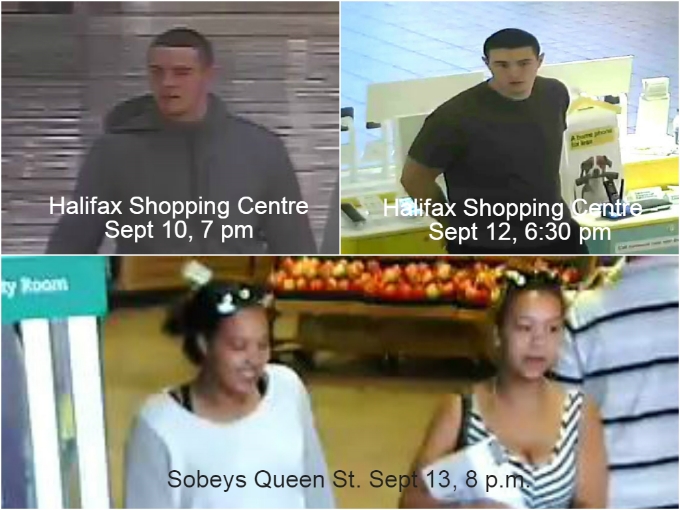 The police have released the above photos of three people suspected of using phoney US $50 bills. Since September 10, there have been at least 25 such instances. “Businesses all over the region were targeted and several thousand dollars worth of counterfeit bills were used,” say the cops in a release.

I find it interesting that so many retailers accept American currency for high-dollar purchases. I get that the trinket shops and bars and restaurants take US money from the tourists, but these folks were buying groceries and, apparently, expensive electronics. The currency exchange loss alone should raise red flags for merchants. 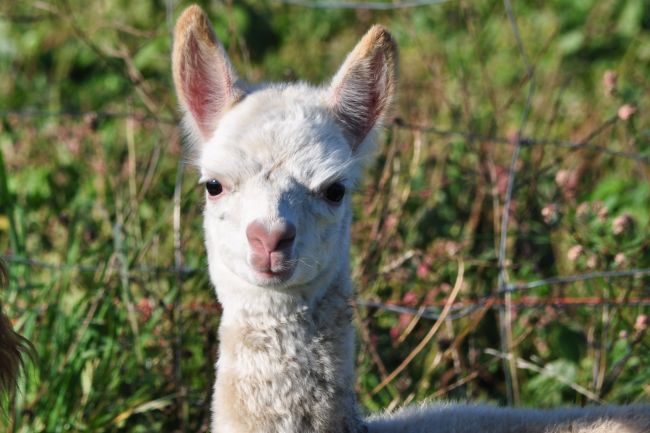 This alpaca needs a name. 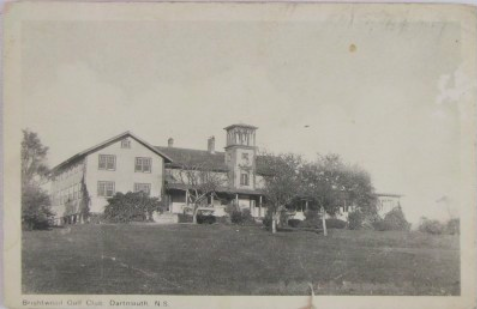 Brightwood Golf & Country Club turns 100 years old this year, and David Jones gives us the history of the place.

2. What’s the sound of one hand giving you the finger?

Spectroscopy (1:30pm, Chemistry 226)—Lewis Kay, a biochemist at the University of Toronto, will talk about “Seeing the Invisible by Solution NMR Spectroscopy.” Refreshments immediately before.

The Stakes of Globalization (7pm, Pier 21)—The promo for the event explains:

In the context of the 25th anniversary of the fall of the Berlin Wall, Alexandra Novosseloff (Paris Panthéon-Assas), an expert in International Relations, offers us her reflections on her book Des murs entre les hommes (Walls between Men), a book she published after a two-year journey during which she documented the different kinds of walls that are being built or have already been built around the world, from the “frontier-wall” between the United States and Mexico to the Berm of the Western Sahara, the Northern Ireland “Peace Line”, the “Green Line” in Cyprus and the Korean Demilitarized Zone.

Bolivia (noon, McNally Main 227)—Juan Tellez, of the Atlantic Centre for Community Economic Development, and formerly Special Advisor to the Minister of Development Planning in La Paz, Bolivia, is this week’s guest for the International Development Studies speaker series. He will be giving a talk: “Bolivia at the Crossroads of Change: To ‘Develop’ or to ‘Live Well’ (Vivir Bien)?”

This week the Treasury Board released some projections for Nova Scotia’s population using seven different models. Here are the highest, lowest, and medium scenarios: 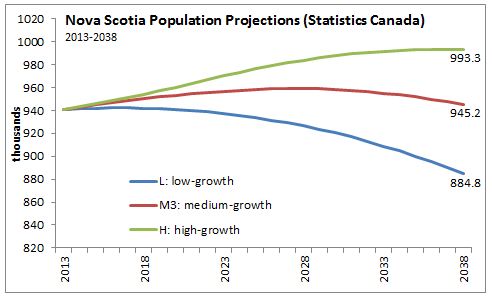 The entire analysis is worth a look, but one thing that jumped out at me was the breakdown by age, which shows the working-aged population heading to 1980s or even ’70s levels: 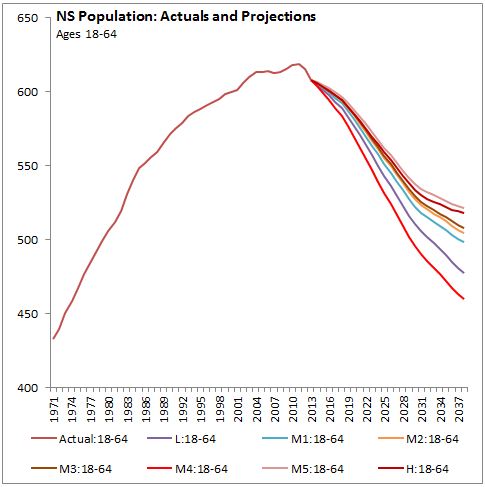 Notes the unnamed author of the report: 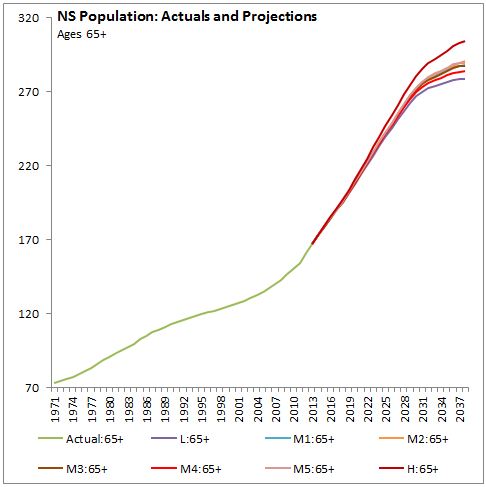 The post warns us that projections are not predictions, and who knows what the future brings? The Scottish separatists might seek refuge in their Canadian namesake, a warship-sized meteor could ironically land on Irving Shipyard, drought and pestilence could wipe us all out, or millions of climate change refugees could come calling to a suddenly tropical Lawrencetown Beach. Or all of the above.

Still, more likely that not, we’re going to have a bunch of old people, and not so many working-aged people. Not to be crass about it, but we should figure out how to squeeze more dough out of the olds.

I mean, sure, there are needy and vulnerable elderly people, and we have a social obligation to take care of them, but the social contract works both ways. Taken as a whole, the current generation of old people is the wealthiest generation the planet has ever seen, and likely ever will see. They lived in a lucky time, in a lucky place, and benefitted greatly from it. It’s entirely reasonable that we transfer some of that wealth to the people who will be taking care of them in their golden years, and to future generations. I’ve long been a fan of (mostly non-existent) wealth taxes, and that’s something we should start thinking about in earnest.

Brilliance of the Seas, a Royal Caribbean ship now in port, was the scene of a compelling (possible) murder mystery that’s been dubbed the “missing honeymooner.” In 2005, passenger George Smith disappeared from the boat, leading to an FBI investigation and flying lawsuits, but no resolution of the mystery. This summer, nine long years after Smith disappeared, CBS’s 48 Hours aired a 45-minute documentary about it called “Murder at Sea?”

HAL issued a statement that the cruise ship turned around at some point and has joined the search for the missing passenger. The ship left Fort Lauderdale, Florida on Saturday for a seven-day cruise.

You can read about prior recent disappearances from HAL cruise ships:

The Oosterdam involving a young man.

The Maasdam involving an elderly man.

The Zaandam involving a young woman.

The overboard from the Zaandam revealed a lack of credibility by HAL’s PR department.

HAL has had 5 passengers overboard from its cruise ships in just the last couple of years. All remain mysteries.

It’s disturbing that people can somehow just disappear on the high seas with no explanation and no video of what happened.  You’d think that the cruise line would revamp its security systems when not one single overboard has been solved in the last three years. It also raises the issue whether HAL is being transparent with the public.

In the entire Scottish independence debate, I was most worried about the Shetland Islanders. Seemed nobody was talking about them.