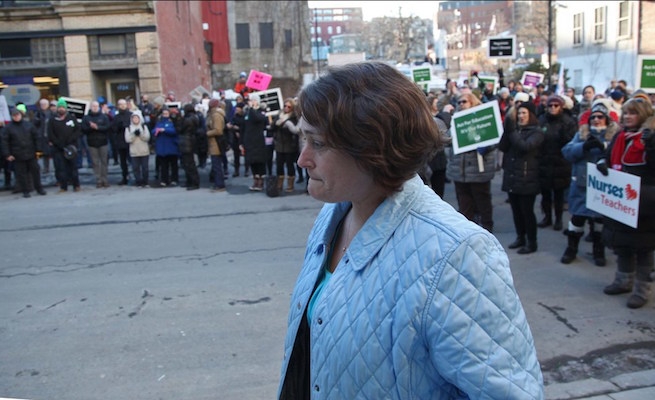 NSTU president Liette Doucet walks away after addressing fellow teachers and supporters at a Halifax rally outside Province House that was held just before the Liberal government passed Bill 75 on Tuesday. Photo: Tim Krochak / Local Xpress

The Liberal government passed the third and final reading of Bill 75 yesterday afternoon. All 33 Liberal MLAs voted for the bill, and all 17 opposition MLAs voted against. Once proclaimed (no doubt this morning), a new contract will be imposed on the province’s teachers. As Michael Gorman reports for the CBC:

The new contract imposes a three per cent wage increase over four years and freezes the long-service award for teachers as of July 2015. Anyone hired since that date is not eligible for the payout upon retirement.

With inflation expected at about two per cent each year, a three per cent wage increase over four years is an effective wage cut of about five per cent.

We’ve been through this a thousand times, so I won’t belabour the point: You do not improve the fiscal health of the province by cutting wages. Teachers buy houses, shop at the grocery stores, eat at restaurants, drink in bars, enrol their kids in daycares and sporting events, buy clothes, and engage in all the other consumptive activities of our time. A wage cut, however, reduces the amount teachers will spend in the local economy, thereby reducing the value of goods and services they will purchase, which in turn means that companies will see decreased sales and less reason to increase their own payrolls. With fewer people working and companies selling fewer goods and services, tax receipts go down and we end up in a worse situation than where we started.

Austerity regimes have been proven an utter failure, time and again. Even the International Monetary Fund and the World Bank warn against austerity policies.

Our problem is not that we’re spending too much on wages. Rather, our problem is that the productivity and tax returns from those workers’ wages are being siphoned off by a tiny undertaxed minority who are stashing their billions in the Cayman Islands instead of putting it to productive use in Nova Scotia.

But at this point I feel like I’m beating a dead horse. Believing in austerity economics is simply willful ignorance. You either go to bat for the obscenely rich and powerful, or you support broadly shared prosperity.

(I posted the above photo by Local Xpress photographer Tim Krochak because I think photojournalists’ work should be highlighted and we should understand what we’re losing when companies like the Chronicle Herald lay off their photographers. See Krochak’s other photos of yesterday’s events here.)

Margie Manning, reporting for the Tampa Bay [Florida] Business Journal, notes that a new firm, called BodiData Inc, has quietly emerged on the local business scene. Manning learned about the company through a stock offering filed with the US Securities and Exchange Commission; BodiData is seeking to raise a total of US$5 million through the offering, and has already raised US$2.57 million in equity from its founding investors.

Why should we in Nova Scotia care about a start-up tech firm in Florida? Because BodiData is using technology that was developed in part thanks to CN$5.6 million ponied up by Nova Scotian taxpayers. That money came in the form of a Nova Scotia Business Inc equity investment in Dartmouth firm Unique Solutions. 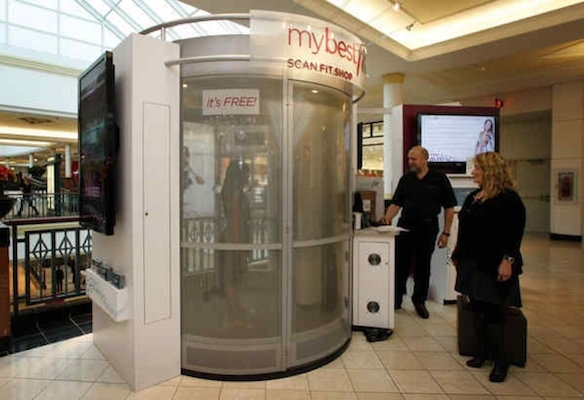 As the Halifax Examiner has reported, Unique Solutions developed a “body scanning” booth that promised to allow shoppers to buy clothes that fit them without trying on the clothes. With the NSBI investment in hand, the company deployed over 70 scanning booths in shopping malls around the United States, but the venture was unsuccessful. The booths were removed from malls, almost the entire value of Unique Solutions’ stock was written off, and the smouldering remains of the company were rebranded first as Me-Ality and then as MeID Inc.

A Silicon Valley “angel” investor named Tuoc Luong was brought in to replace company founder Tanya Shaw as CEO, and having developed a “hand held scanner” version of the body scan booth technology, the company embarked on a last-ditch search for new investors, but folded in August. Although NSBI hasn’t officially written it off, it’s clear that the entire NSBI investment is gone.

And now BodiData pops up. Manning reports that two executive officers at BodiData — J. Bruce Terry and Luong — were both executives at MeID. Moreover:

BodiData appears to have many similarities to MeID. On Feb. 21, it was assigned a patent for an invention by Unique Solutions Design Ltd. for a handheld, multi-sensor system for sizing irregular objects.

When MeID failed, debtors were left holding the bag for what I once estimated was around $100 million in company liabilities. Luong wrote a letter to shareholders explaining the bankruptcy process:

Senior secured creditors have outstanding loans of $US1.7 million and junior secured creditors have loans of more that $US31 million. Those loans take priority over the claims of unsecured creditors, which in turn rank ahead of Preferred Shareholders and Common Shareholders. The Preferred Shareholder’s priority claims represent more that US$8 million. Consequently the liquidation process will need to generate more than US$41million in order for Common shareholders to receive any form of distribution. We can offer no expectations as to the level of proceeds that may be realized from a liquidation process. However, we believe it is unlikely that material proceeds will be realized based on, among others, the general lack of interest in our most recent financing round.

In short, with too many investors expecting a stake in the company, and with too much other debt, MeID could not attract enough investment to keep the company afloat.

But through the liquidation process, company execs Luong and Terry picked up the Unique Solutions patent at fire sale prices, created their new company, BodiData, and went looking for investors who might be attracted to a new company offering the same technology but without the debt.

I wonder how Unique Solutions’ investors feel about that.

And isn’t it great the Nova Scotian taxpayers have funded the development of a technology now being used by a start-up operation in Florida? Some might call it an innovative approach to economic development.

And hundreds of people let me know I was wrong, wrong, wrong. I’m happy to acknowledge my mistakes, and I try to thank people who correct my factual errors, but I’m just so overwhelmed by communications I can’t get to everyone, or even a tiny sliver of everyone. 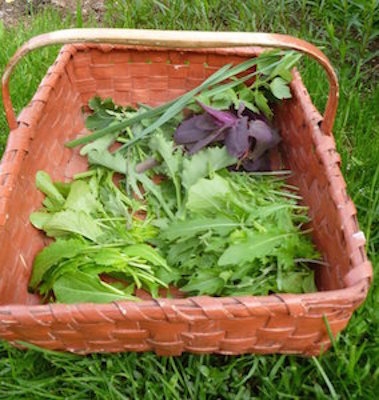 Stephen Archibald recalls his interactions with Mi’kmaq people through their baskets:

For years, baskets made of black ash splints by Mi’kmaq families were my only tangible connection with that community. I remember carrying a Mi’kmaq-made basket to the bakery in Bridgetown every summer in the 1950s. It was low and flat, perfect for pie. That basket is still around and now is taken into our garden in the cove when gathering vegetables for supper or flowers for bouquets. A carrier of memories, made to be used and made to last.

In the 1950s a Mi’kmaq family would camp every summer at the base of the North Mountain above Bridgetown. They came to make baskets, close to a black ash source, and we would see them on our drive over the mountain to get an ice cream cone at Hampton. At some point they would walk into town with a large bundle of brightly coloured baskets for sale and spread them out on the lawn if you wanted to examine the different shapes.

Over a lifetime there have been many changes in my understanding and appreciation of Mi’kmaq culture. I’m enriched by hearing contemporary Mi’kmaq voices telling their own stories. And fittingly the last basket we acquired, a few years ago, was sold in an art gallery, because that is where it belonged. And the creator was no longer anonymous (like the makers of the rest of these baskets). This was made by the late Chief Greg McEwen from the Bear River First Nation.

Special Events Advisory Committee (9am, City Hall) — the committee wants more tourists to come to town. Not just any tourists, but the kind that spend money.

Regional Watersheds Advisory Board (5pm, Alderney Public Library) — the board will discuss weeds in Dartmouth’s lakes.

Police Commission (9am, Alderney Gate) — the commission is developing its own work plan.

Special Halifax Explosion 100th Anniversary Committee (4pm, NSCC – IT Campus) — the committee is doling out about a half million dollars in grant money. 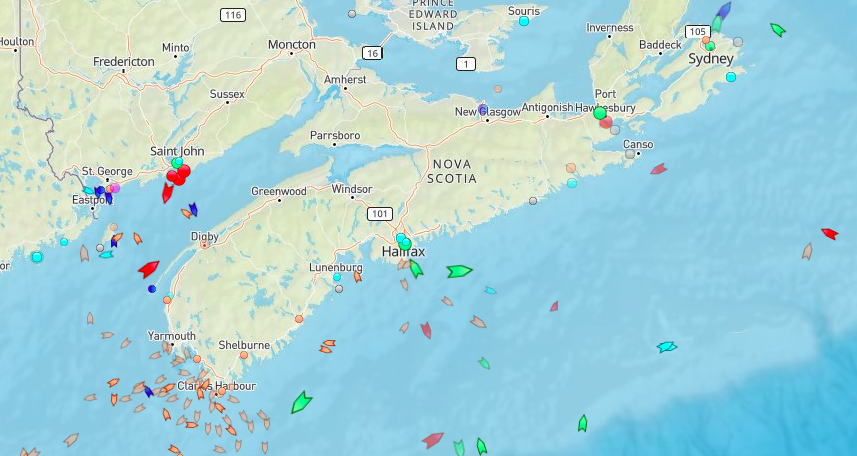 The seas around Nova Scotia, 8:45am Wednesday. Note the fishing boats off Shelburne. Map: marinetraffic.com