The study used benchmark toll amounts of six to ten cents per kilometre, based on results of a willingness-to-pay survey conducted by CBCL. The rates do not necessarily reflect what a toll rate would be, should Nova Scotians decide to proceed with tolling.

“I need to be very clear, government has not made a decision to move forward with twinning through tolling,” said [Transportation and Infrastructure Renewal Minister Geoff] MacLellan. “We now have the data that will provide the foundation for a discussion with Nova Scotians.”

The study identifies eight sites where series 100 highways could potentially be twinned: 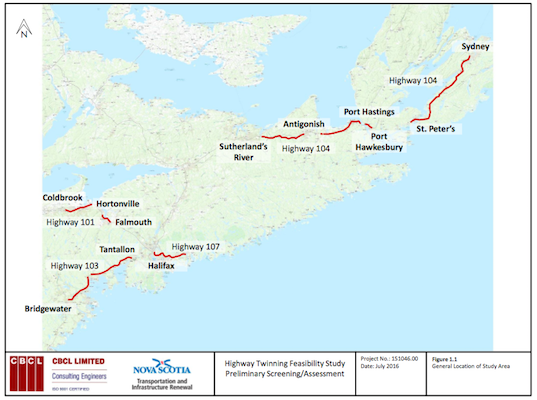 CBCL projected toll revenues (at 10 cents a kilometre) through the year 2055. It also looked at another specific peak demand tolling system for Highway 107, with rush hour tolls of up to 50 cents a kilometre. As well, it projected safety improvements in terms of decreased collisions, as follows:

The study also looked at time savings for commuters.

On the costs side, CBCL took a stab at very back-of-envelope capital costing (called “Class D” costing, meaning absolutely no engineering is done) of the various proposals. There are some potential cost savings by using cables as barriers between oncoming lanes of traffic (instead of twinning) on some of the highways, but the full cost of twinning all eight highways was found to be $2,323,700,000 (+/- 30 per cent):

With all that data, CBCL ranked the highways in terms of financial viability:

Phase 2 of the study will get to more exacting financial details.

The government now spends about $400 million on highways annually — about half of that is for operations, the other half for new construction — and illustrates the challenge of twinning as follows: 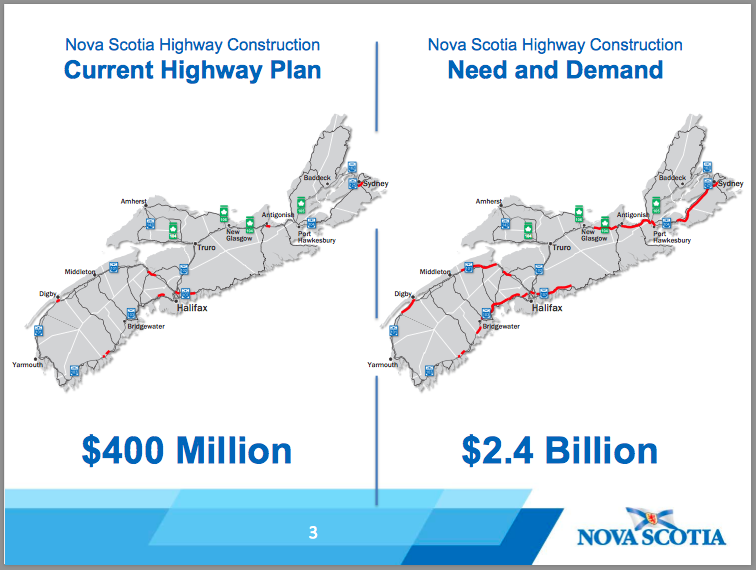 What isn’t discussed in the twinning study is the cost of the proposed expansion of the BiHi (including the utterly unnecessary Highway 113, it comes in at about a billion dollars), or the Burnside–Sackville connector (another $200 million). So let’s call it $3.6 billion.

The Liberals seem fixated on the neoliberal solution — bring in a private sector “partner” to operate toll roads, so the capital costs don’t show up on government budget sheets as debt. But clearly citizens will be paying for the twinning one way or the other — either through an increase in taxes where there’s at least the possibility of democratic control or via a toll that includes a hefty profit for unnamed and unaccountable investors.

More important, the twinning assumption locks us into four decades more of relying on highways and automobiles as not just the main but the only viable means of transportation in the province. Two and a half billion dollars (or $3.6 billion, or whatever the true costs turn out to be) is, well, a hell of a lot of money.

At least some of that money that could and should instead be invested in rail systems.

I’ve been a bit remiss on mentioning this issue, as I’m oddly working on something that is tangentially related. But as Pam Berman reported for the CBC Wednesday:

Halifax has issued a demolition permit for another house in the South End.

George Tsimiklis has already demolished what was known as the Cleveland House at 851 Young Avenue. Now city officials confirm that Ambrose Environmental has just been given permission to demolish a five-unit residential building at 825 Young Avenue.

The municipality has also received a subdivision application from Steve Tsimiklis for a lot that includes both properties on Young Avenue as well as two others, 870 and 876 MacLean Street.

The cranky letter below is about this.

Sue Oberg, who was the Chief Financial Officer and Assistant CAO of Westlock County, Alberta, resigned yesterday, taking a job in the neighbouring Woodlands County. Oberg says she was left completely in the dark about former CAO Peter Kelly’s dealings with Horizon North, a company that wanted to lease and potentially purchase land in the Westlock Industrial Park. The county lost over $200,000 on the deal.

I played phone tag with Oberg yesterday, but hope to interview her today.

“I was beginning to believe that maybe, just maybe, our municipal leaders were finally understanding this process about engaging our community in developing a vision for a prosperous future,” writes Geoff de Gannes in the Amherst News:

After all, Amherst town officials had the foresight to seek out the services of Engage Nova Scotia and encouraged the community at large to participate in an exercise of building consensus by identifying our many strengths and building on them. As a result, a number of citizens’ groups are now making a sincere attempt to be part of this important process.

Fast forward to a recent town council session and we had the Amherst Town Council instructing town staff to investigate the possibility of the town operating a Chase the Ace fundraiser as a means of generating revenue to help fund recreation programs and upgrades to infrastructure such as the Robb’s Complex and Dickey Park.

I’ll leave aside de Gannes’s uncritical enthusiasm for Engage Nova Scotia, but he goes on to rightly ridicule the Chase the Ace proposal. This is where we’ve come: politicians cannot properly fund needed government services — the kinds of services 1950s-era towns could provide as a matter of course — for fear of being labelled tax raisers, so they take seriously the idea of a back-door tax on the addicted, the desperate and/or the mathematically challenged who are attracted to sanctioned gambling.

I find it incredibly disheartening that Young Avenue is being destroyed and there has been very little interest shown in stopping this madness on the whole, by council and mayor. Your inactions speak volumes to the residents of Young Avenue, the neighbourhood, city and tourism in general. You, and by that I mean a collective “you” (mayor and city council), pass the problem off onto other departments, passing the buck so to speak, so that you don’t have to deal with the issue. Aside from a couple of councillors, there has been a suspicious silence about the issue — like you don’t want to “poke the bear” fearing a backlash.

Maybe everyone is more concerned with elections looming on the horizon. If it isn’t in your constituency then it doesn’t affect you? Well it does. It affects us all. It affects the vision entrusted by Young Avenue’s founder, the Hon. William Young to have a public grand avenue with beautiful homes set back from the street with a clear landscaped view to the Golden Gates and the then entrance to Point Pleasant Park. Yes I said public avenue, not just for the rich. Destroying the original governed setbacks from the street, and creating a densification of homes in plots intended for single homes is completely undermining the intent of Young’s vision. Now there is to be a subdivision within Young Avenue? This is insane! William Young would be horrified at what is being done to destroy all he had done for this city to make it beautiful and make us proud.

I grew up in the south end of Halifax although not on Young Avenue. I love travelling down that street admiring the homes and properties just like the tourists do. Even though I live in Dartmouth I still care about what happens to that avenue! I am passionate about heritage and hate seeing the destruction of homes even if they aren’t officially “registered” heritage properties. I am pleading with you that this area needs to be declared a heritage streetscape or heritage district before it’s too late!

You may say, “Well, put your ideas forth during the Centre plan meetings.” The so-called Centre Plan doesn’t address the immediate dangers these homes are facing. The input of citizens, the meeting, the studies, the recommendations…these will take a year, two years or may not even get off the ground. In the mean time homes are being demolished, very few a officially declared heritage even though they are, the neighbourhood is in immediate danger of being drastically changed! The Oland “castle” Lindola, if bought by a developer, could be demolished — it isn’t even a registered heritage building (I was shocked to find that out)!

Many of the original residents who built these magnificent homes shaped our city and our province. I hope the collective “you” can reverse the perception the public has of council now, which is not very good at all I am afraid. I am passionate about this city. I care. Do you?

There’s a lot in the Bible, some of it perverse, some of it just weird, but here and there there’s some good stuff. I always liked the bit about Jesus kicking the money changers out of the temple:

“My temple should be a house of prayer but you have made it a den of thieves.” That, however, is not a lesson taken to heart at St. Matthews Church, apparently, as the church last night was branded by TD Bank for a Jazz Festival show… oh, I’m sorry, for a TD Halifax Jazz Festival show: 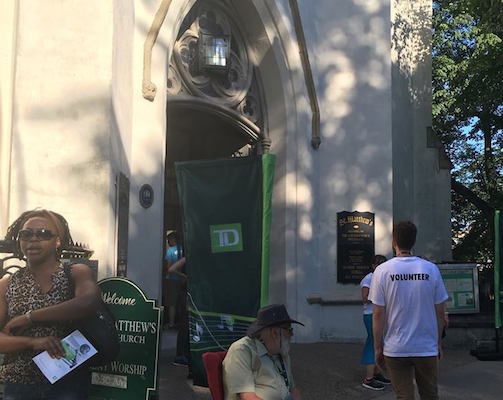 I hear eye-rolling across the city. But lest we forget: the bankers broke the global economy. The banks are the instrument for the increased inequality that defines our societies. Banks are responsible for the the commodification and financialization of every damn thing we do, sucking the soul out of every human activity and humanity itself.

I don’t know if churches were ever really in the business of caring about souls, but they used to at least feign interest in them and reject such blatant mercantile entanglement.

The best thing we could do to commemorate the Explosion is to work to put an end to war. A good first step would be to ban warships with nuclear weapons from entering Halifax Harbour. 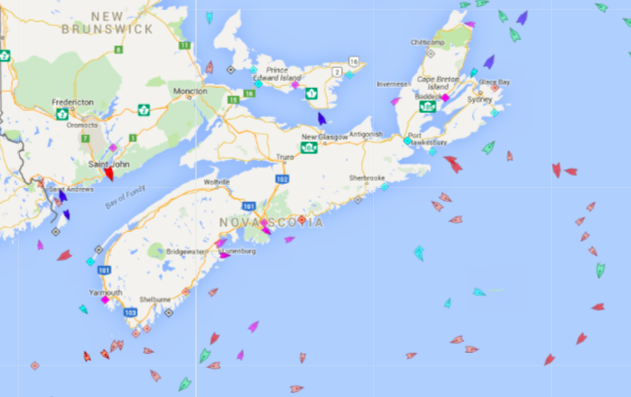 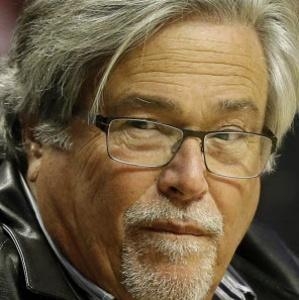 8am: Mylin IV, the superyacht owned by Micky Arison, the Chairman and CEO at Carnival Cruises who inherited all his money from daddy, arrives at the Salter Seawall from Miami. Last year, reports Jim Walker, Arison sold nearly a billion dollars worth of stock in the company:

This vast wealth was generated by incorporating the cruise line in Panama and registering Carnival-owned cruise ships in places like Panama and the Bahamas in order to avoid all U.S. taxes, safety regulations, and wage & labor laws so Carnival can pay the bulk of its crew members peanuts.

Carnival-owned Costa paid just a little over $1,000,000 in fines after the Costa Concordia disaster, which killed 32 people, in order to escape accountability in the criminal trial of Captain Schettino.

I’m sure Arison will be feted like royalty by port officials, but were there any real justice he’d be strung up on Hangman’s Beach, a warning to other asshole superyachters to stay the hell out of town.

I’ve been waking up to various nightmares lately, but the nightmares aren’t nearly as frightening as the actual news I read when I fire up the computer.

Tim Bousquet is the editor and publisher of the Halifax Examiner. email

Tim Bousquet is the editor and publisher of the Halifax Examiner. email