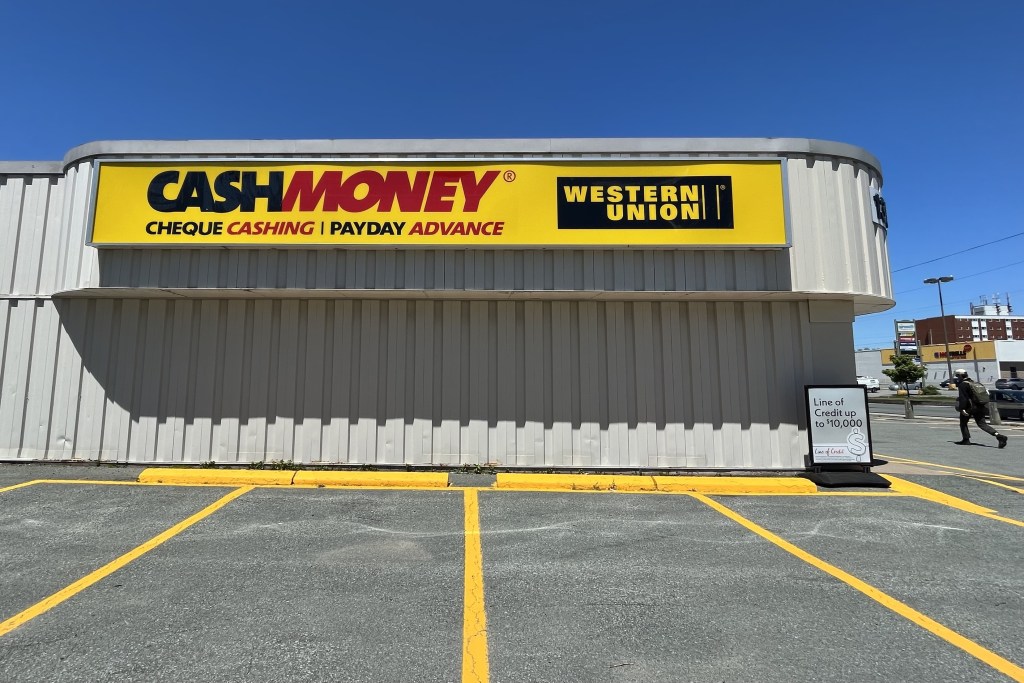 A payday lender on Wyse Road in Dartmouth on Tuesday. Photo: Zane Woodford

Payday lenders will get a smaller cut of Nova Scotians’ cheques later this year.

Currently, Nova Scotia’s maximum is the second highest in Canada, with Newfoundland and Labrador capping interest at $21 on a $100 loan. Saskatchewan and Manitoba allow $17 per $100. At $15, Nova Scotia would match British Columbia, Alberta, Ontario, Prince Edward Island, and New Brunswick.

The change to $15 per $100 will bring the annual interest rate down to about 390% (assuming a two-week term). If that rate sounds criminal, that’s because it is, but payday lenders in Canada are exempt from the Criminal Code provision capping interest at 60% annually.

Nova Scotia was the first province to regulate payday loans, and the UARB first held a public hearing on the loans in 2008, choosing to set interest at $31 per $100 (about 800% annually). Since then, it’s revisited the regulations periodically, lowering interest each time. Most recently, it held a hearing in 2018 and lowered the interest to the current $19 per $100.

In its decision, a three-member panel of the board — vice chair Roland Deveau and members Richard Melanson and Jennifer Nicholson — summed up a hearing held in March 2022, when the board heard from members of the public, consumer advocates, and payday loan industry representatives.

Those representatives argued lower rates would wipe out the payday loan business. Canadian Consumer Finance Association (CCFA, previously known as the Canadian Payday Loan Association) lawyer Patty Ko argued the pandemic has already had a significant effect on the industry.

“Given the significant negative impact of the COVID-19 pandemic, she indicated it was not the time to make significant changes and urged that the $19 per $100 maximum cost of borrowing be maintained,” the board wrote.

Patrick Mohan, president of the Independent Payday Loan Association of Canada, argued rates should go up.

“Mr. Mohan suggested that rather than lowering or maintaining the current maximum cost of borrowing, it should be increased to allow smaller operators to offer their product,” the board wrote.

“While his presentation provided anecdotal evidence, there was no verifiable data or expert opinion evidence in support of the proposition that the maximum cost should be increased. The Board rejects this proposition.”

The pandemic has resulted in a decrease in payday loans being issued, and to repeat customers, but the board noted there was an increase in the default percentage.

“The data shows, for the pre-COVID period, a decline in the number of loans from 2015 to 2019 of approximately 8%, although the decrease in the total value of loans was only about 3%,” the board wrote. “The data further indicates that the number of different companies offering payday loans in Nova Scotia, and the number of retail outlets, has remained stable from 2017 to 2021, despite a reduction in the maximum cost of borrowing and a pandemic.”

The board ruled there’s no reason lenders in Nova Scotia can’t make a living charging the same rates as most of the country.

“The CCFA offered no evidence, or satisfactory explanations, why this would not be the case,” the board wrote. “While there are no doubt regional differences in overall population, demographics, income, and other financial yardsticks, the profile of the consumers of the product should, by virtue of the nature of the product, be relatively similar across the country. The industry, as a whole, should be able to service this demographic on relative parity with the rest of the country.”

While it didn’t side with the industry, the board wrote that it did take the pandemic-related impact on business into consideration.

“Were it not for the impact of the COVID-19 pandemic, the Board would have been inclined to move immediately to the $15 per $100 maximum cost of borrowing,” the board wrote. “The Board is of the view that a phased approach to the reduction in the maximum cost of borrowing, to reach a level where Nova Scotia consumers are afforded the same rate protection as is available to most of the rest of the country, is reasonable in the circumstances.”

The board also reduced the maximum interest rate on arrears after default to 30% from 60%, and left the default penalty at $40, the highest in the country.

The board noted many members of the public asked it to abolish payday loans altogether or adopt regulations similar to those in Quebec, where a cap of 35% annual interest has effectively ended the practice.

The board adopted the provincial government’s position on that issue, arguing “the elimination of the regulated payday loan industry in Nova Scotia would reduce available options of short-term credit for consumers.

“It would also increase the presence of unscrupulous and unregulated lenders, particularly unlicensed online lenders, potentially leading to the unfortunate consequences of innocent borrowers accessing such unregulated loans from the internet,” the board wrote.

The board will next consider payday loan rates in three years, unless “a critical issue is brought to the Board’s attention in the interim.”