“The Sipekne’katik First Nation and a number of other groups will file an appeal with the Nova Scotia environment minister on Thursday after the province last month approved an application by AltaGas Ltd. to proceed with its Alton natural gas storage project near Stewiacke,” reports the CBC.

The Ecology Action Centre is holding a press conference this morning about the issue.

Myles Howe, writing for The Coast, goes into much detail about the Alton plan, including giving the context for what’s happening at Stewiacke:

According to a study conducted by Kaminak Resources Ltd., AltaGas has had its eye on the possibility of salt cavern storage in the “Stewiacke formation” since at least 2005. These caverns, of which there are plans to drill anywhere from four to 18 or more, will be dug out of a naturally occurring salt formation between 800 and 1,000 metres underneath the rural community of Brentwood, Nova Scotia.

According to a presentation prepared in 2013 by ICF Consulting Canada Ltd., while under contract to the Nova Scotia Department of Energy in 2013, when completed the caverns will have an initial storage capacity of four to six billion cubic feet, with the potential to expand to upwards of 20 billion cubic feet and more. That could meet the full energy requirements of 220,000 homes for one year, and provide storage services for both the Maritimes and New England. It could also—given the vast boundaries of the Hydrocarbon Storage Area Lease provided to Alton Gas by the Department of Natural Resources—turn a corner of rural southern Colchester County into one massive underground natural gas containment field. Eighteen gas caverns may only be a start.

The province’s official line is that the Alton Gas caves will save natural gas customers $17 million each year. The $17 million line appears to be attributable to Michael Sloan from the same ICF Consulting, when he was retained as an expert witness by Heritage Gas and brought before the Nova Scotia Utility and Review Board in 2015. It should be noted that Sloan has a track record as a pipeline and natural gas-friendly expert witness for hire.

Even if the $17 million in local savings is true, that’s throw-away money compared to the potential profits to be made in New England. The long-term potential of dozens more caverns—allowing natural gas to be purchased and stored at summer prices, then sold during winter months to New England at a price still cheaper than whatever gas is coming in via winter pipelines—could be immense. 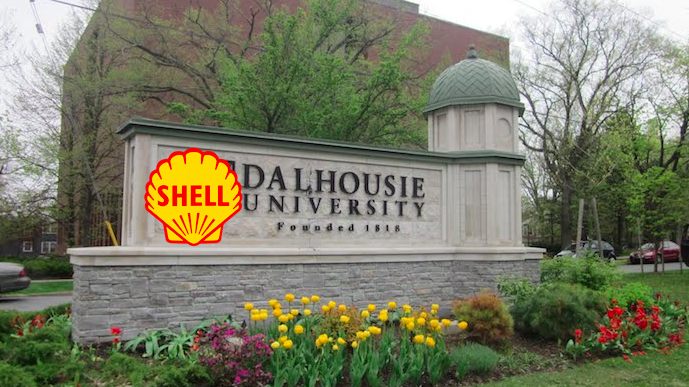 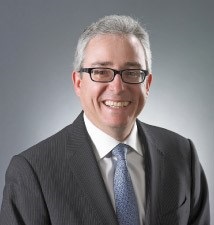 Forsyth lives in Calgary, although he also has a home in Williamsburg, Virgina. Why is a Calgarian on the Dalhousie board? Here’s why:

Jody currently resides in Calgary, Alberta, where he is a co-founder and managing partner of Annapolis Capital Limited, a private equity firm that invests and manages institutionally funded pools of capital in western Canadian start-up and early stage oil & gas companies. Prior thereto, Jody co-founded and helped manage several private oil & gas companies from start-up through to corporate sale.

Forsyth was also the chair for Western Canada for Dalhousie’s 2011 fundraising campaign called, and I’m not kidding, Bold Ambitions. The campaign raised $280 million from private donors, including a donation of between $1 million and $5 million from Forsyth and his wife.

The 2011 Bold Ambitions campaign, incidentally, came just as Dalhousie was signing an agreement with Shell Canada to essentially turn huge chunks of the university over to Shell control.

“We get back far more than we give,” Forsyth told Dal PR writer Ryan McNutt.

I guess we know what the premier thinks of divestment.

Speaking of Shell, last month Energy Minister Michel Samson went out to Stena IceMAX, Shell Canada’s drillship in the Shelburne Basin, for a photo op. Afterwards, a PR hack back in the Halifax office wrote up a Q & A about the trip, including this bit:

Q: What questions were you asking?

Last fall, I heard from several Nova Scotians with concerns about spills and blowouts, and it was on my list to better understand the emergency response systems the ship has in place, in the remote case that something goes wrong. Well, rest-assured, the technology and response protocols are an essential part of this operation.  I felt dwarfed by the size of the blowout preventer onboard the ship, which is one of two at the site. The other blowout preventer is installed underwater, on top of the well head, and is accompanied by a camera that sends images up to the operator at all times.

See also: the Titanic is unsinkable, the Iraqis will welcome us as liberators, and the derivative markets are fundamentally sound. 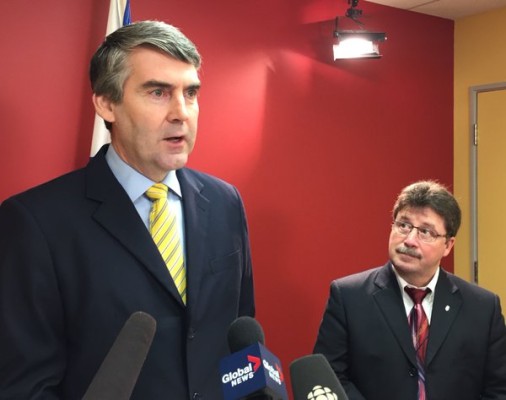 Former PC and recently Independent MLA Chuck Porter has joined the Liberal caucus. Michael Gorman tells us what it all means.

Everyone will deny it, but that hockey mall was obviously part of the deal. 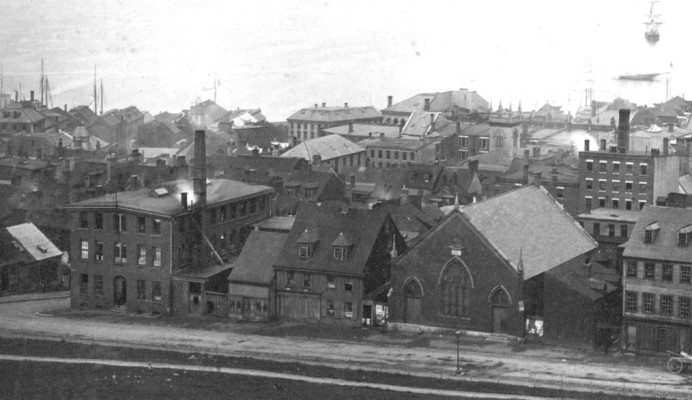 Stephen Archibald shows us the Taylor Shoe Factory, a building that once sat on the block that the $48 NSF Fee Centre now occupies:

By 1890 the company employed over 180 workers, 50 of them women producing 4500 pairs of shoes a week. There was a retail shop on Granville Street and their products were marketed throughout the Atlantic Provinces and St Pierre.

In the 19th century downtown Halifax was full of manufacturers and processors and their workers all lived within walking distance.

In January, a woman from Edmonton was in the [Victoria General] for four days to donate a kidney. She described the conditions there as “third world.” So Turpin Laboratories had a look during the first week of February. Our researchers confined themselves to public spaces on just a few floors. No patients or staff were disturbed, or even noticed our team. By way of further context, note that in 2011 the NDP government announced that planning had begun for a new building. Last month, four years later, the Liberals also announced that planning had begun. And Turpin Labs has reason to believe Capital Health actually SUBMITTED a rebuilding plan to the Health Department in 2009. Where is it today? We bet the new convention centre will open before you ever see that plan.

Turpin went on to post 25 photos of the deplorable condition of the building, including these: 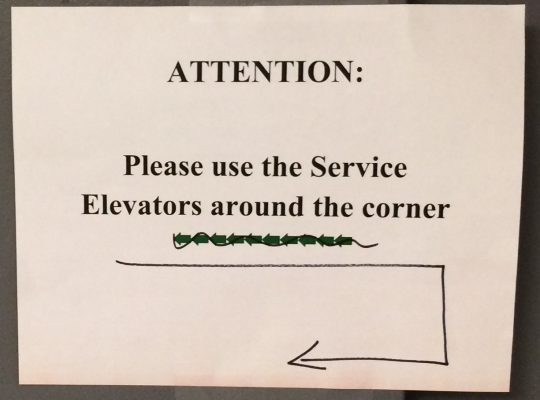 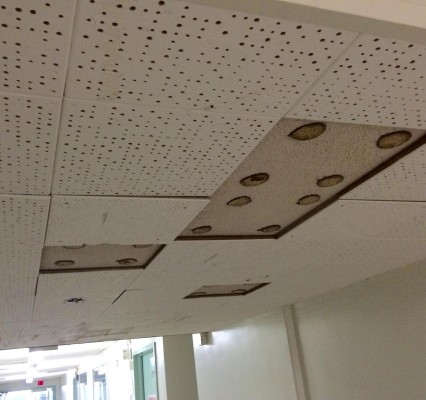 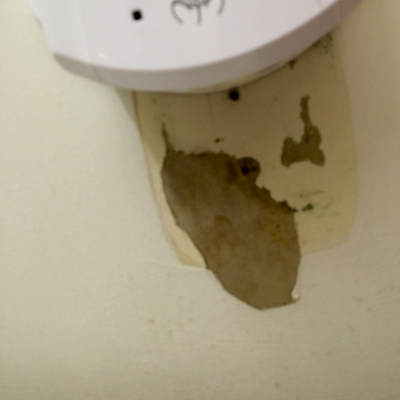 Turpin’s photos reveal a building that’s not only in disrepair, but also one that is ignored: basic cleaning and maintenance is avoided.

A new building should obviously be a priority, but if we can’t provide regular cleaning and maintenance, what’s the point? A new building will quickly look like the old.

Howard Ramos, one of the co-authors of Pathways to Prosperity (P2P), a report that analyzed how immigrants fare in Nova Scotia, summarizes the report’s results:

The report busts a number of myths. The first is that immigrants don’t find work in the province.

This may have been the case a couple of decades ago, however, recent economic immigrants who arrived in Nova Scotia between 2010 and 2012 out-performed newcomers in other parts of Canada.

Immigrants to the province actually have higher rates of employment one year after arriving (76 per cent) compared to Canada as a whole (73 per cent).

Another busted myth is that immigrants will be underemployed compared to other parts of the country.

The report finds that one year after landing in Nova Scotia, economic principal applicants’ average earnings are $44,000 compared to $36,000 nationally.

One more busted myth is that immigrant spouses and partners do not fully contribute to the economy.

The majority of spouses and partners are also employed one year after arrival and over a third have a university degree.

For those landing between 2010 and 2012, average earnings were $26,000 one year after arriving compared to $22,000 for immigrants across Canada. Policy makers should not underestimate the economic potential of sponsored family immigrants.

Larry Cooke just wrote the most ill-informed letter on cycling that I’ve seen in some time. Let’s take a deeper look at some of his points.

1) “We have real winter here.” Yes we do, and they have even more real winter in Montreal and Ottawa. If Larry were to go there, he’d see awesome cycling infrastructure, and more cyclists on the roads in winter than we ever see here. Winter cycling is very possible, and very safe, when the city does its job clearing roads of snow. (This year, Halifax is doing pretty well.)

2) “Just walk to work, or take the bus for the winter.” Well, when I cycled to work year-round, I had to go from west end Halifax to the Bedford Institute of Oceanography. The trip by bus took 90 minutes, and the first bus in the morning got me to work 30 minutes late. I’m a government employee, Larry. You don’t want me late for work, because then you might complain about the 30 minutes of your tax money being wasted each day. Walking to work took even longer than taking the bus. But I biked it in less than 20 minutes, using the bike lane on the Macdonald Bridge (which my tax dollars helped build).

3) “No pay, no say”? Sorry Larry, I pay, and every person you see riding a bike pays too. Through our tax dollars, we pay to build and maintain all the roads you drive your car on. Even apartment dwellers pay, because their property taxes (for their building) are built into their rent. We very much have a say, thanks very much.

But there’s a silver lining in all this for you, Larry. Every person you see riding a bike in winter isn’t driving a car that might take that parking spot you want before you can get to it.

Community Planning & Economic Development (10am, City Hall) — perhaps the most interesting thing on the agenda is Mayor Mike Savage’s motion for “Permanent Encroachments for the Purpose of Facilitating Accessibility.”

Appeals Standing Committee (1pm, City Hall) — doesn’t look like there’s anything terribly interesting, but this is the one council committee that surprises.

Active Transportation (4pm, City Hall) – I’m reviewing the agenda at 9:30pm on Wednesday, and there’s absolutely nothing there.

Resources (9am, One Government Place) — Andrew McCurdy, chair of the Dairy Farmers of Nova Scotia, will talk about cows.

It’s reading week at the universities, so nothing going on today.

But Saint Mary’s University is looking for a head-hunting firm to hire a VP of Academic and Research. 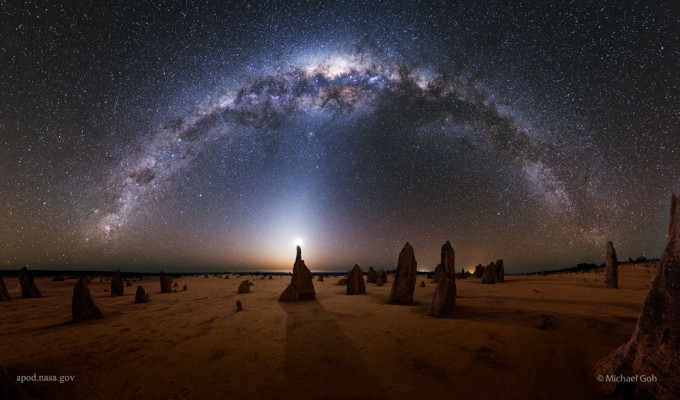 What strange world is this? Earth. In the foreground of the featured image are the Pinnacles, unusual rock spires in Nambung National Park in Western Australia. Made of ancient sea shells (limestone), how these human-sized picturesque spires formed remains unknown. In the background, just past the end of the central Pinnacle, is a bright crescent Moon. The eerie glow around the Moon is mostly zodiacal light, sunlight reflected by dust grains orbiting between the planets in the Solar System. Arching across the top is the central band of our Milky Way Galaxy. Many famous stars and nebula are also visible in the background night sky. The featured 29-panel panorama was taken and composed last September after detailed planning that involved the Moon, the rock spires, and their corresponding shadows. Even so, the strong zodiacal light was a pleasant surprise. 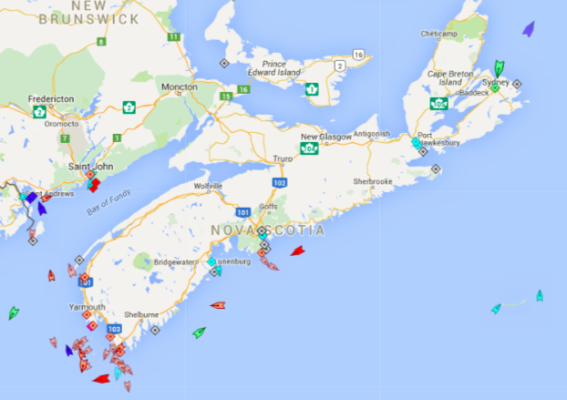 I’ll be posting a couple of articles later today, then off to record Examineradio.

Along the way, I’m reading a horrifically fascinating court file related to the next instalment of DEAD WRONG.