You are here: Home / Featured / Nova Scotia doesn’t have a demographic problem; it has a wage problem

It’s the same people always prattling on about the free market and supply and demand and so forth who suddenly become Soviet-style central planners when it comes to the labour supply, demanding that the government do something! about it. The fact is, they simply don’t want to pay the real costs of labour, and they want the state to intervene to bring in more workers to keep their labour costs down.

I see this time and again among business owners: they bitch and complain about not being able to keep good workers, while also bitching and complaining about the minimum wage and efforts to introduce living wage standards. You want a decent, dependable work force? Pay your help better. It’s as simple as that.

I have a friend who almost weekly sends me job ads for positions that require advanced degrees or vast experience, and yet pay shit wages. I haven’t published these ads for fear that companies will stop listing the salaries; instead, I’ve been silently watching them, and taking note.

But to illustrate today’s post, let me just pick one random example from my friend’s emails. Last July she sent me a job ad from MacDonnell, which provides project management and consulting services for port-related projects.

I’ve known people in such positions, and this kind of work is almost always under-appreciated. It requires taking vague directions from managers and turning them into concrete actions, and massaging a lot of egos along the way while producing something worthwhile at the end. If you find someone who can do this work and do it well, you should value them dearly.

In this case, the job ad listed a dozen or so “skill requirements” that included experience and “Sound knowledge of Customer Relationship Management systems,” along with a bunch of mumbo jumbo about multi-tasking, being “result-oriented,” and so forth. Qualifications for the job were an “Undergraduate or Diploma Program in Marketing, Event Management, Public Relations or a related area” and “Advanced MS Office Skills (Word, Excel, Powerpoint).”

So the successful candidate needed a diploma or degree.

As I say, this particular ad is not an outlier; my friend sends me such examples nearly every week.

And we wonder why young people flee for parts west.

Honestly, I think much of the power structure in Nova Scotia would rather shutter their profitable businesses than pay the staff decently. They’re that stuck with keeping the hierarchy starkly defined.

The second reason we shouldn’t get overly concerned about the “demographic problem” is because at some point we need to grapple with the larger environmental issues that a large global human population brings with it. Thankfully, fertility rates are sinking all over the place. Most western countries are far below replacement levels. Japan is actually losing population because it’s a couple of generations into low birth rates and the old people are finally dying off. One of the most successful birth control campaigns in the world is in, believe it or not, Iran, as contraceptives are readily accessible and family planning is encouraged. Much of the rest of the world is following suit, albeit the timelines on these things are long — it’s still too little too late, and (barring catastrophe) the total population will curve upwards for a few decades more before starting to decline.

So I don’t see why we should be encouraging people to be having babies. It’s a good thing that some nations are providing free day care and other incentives for families, but at some point — the sooner the better — we’ll need to make do with fewer people to make the economy work. That flies in the face of continued-growth capitalism, but here we are. We should start thinking about what a zero-growth or negative-growth economy looks like; I’m not at all certain that such an economic order is contrary to our belief in social justice, and indeed may help in the fight against inequality.

All of which is prelude to this Canadian Press article written by Michael MacDonald:

For the first time in a generation, Nova Scotia’s population growth is almost keeping pace with the national average — a development that signals a reversal of fortune for a province that has languished economically for much of the past 25 years.

Statistics Canada confirmed this month that the province’s population had risen for the third consecutive year, adding more than 10,000 residents in the past year alone. That’s a jump of 1.08 per cent in one year, compared to the national average of 1.4 per cent.

For market research expert Don Mills, the strong three-year trend is something to crow about.

“I’m very excited by what’s happening … That has never happened, based on statistics going back 65 years.”

I thought Don Mills was going off into the sunset with his guitar? I’ve never understood why he was the go-to commenter on anything beyond polling, and even there I have my doubts. As I see it, Mills is about as old school as one gets, stuck in a 1980s view of the world, and all the economic perspective and assumption baggage that comes with it: football stadiums are good, paying people more is bad, truly diverse and representative government is frowned upon (Mills was the loudest voice for reducing the size of Halifax council).

Between January and October of this year, the number of immigrants coming to Nova Scotia jumped by a whopping 36 per cent when compared to the same period last year, [Fred Bergman, senior policy analyst with the independent Atlantic Provinces Economic Council] said.

But if the point of encouraging and keeping immigrants is merely to keep hiring people for shit wages, we’re doing it wrong. And it won’t work in any event — soon enough, like the home-grown young people before them, immigrants will skedaddle for points west, where their honest work will be respected with honest pay.

In short: Nova Scotia doesn’t have a demographic problem; it has a wage problem. 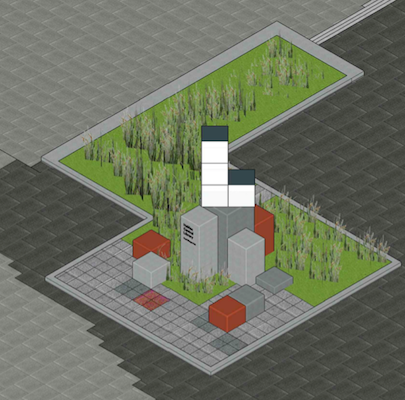 The city this morning issued a Request for Qualifications (RFQ) for 11 concrete blocks that will comprise a new sign at the Central Library.

Each block will be one of four colours, defined by the “Davis Colour” architects use — white, Brick Red 160, Outback 677, and Silver Smoke 8084.

The whole thing will be placed out on the corner of Queen Street and Spring Garden Road.

3. Michael Gorman walks in the woods

There are worse assignments than walking the Lunenburg Trail to check out art.

Slow news day, so why pretend it’s not?