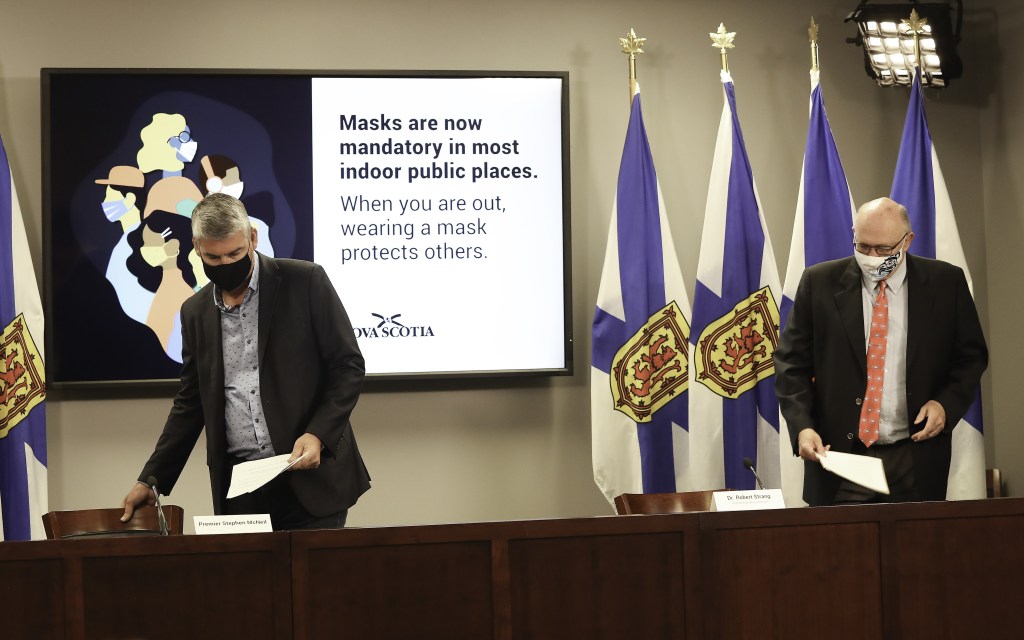 Premier Stephen McNeil told a media briefing today that while he’s considering the options of re-opening to the rest of Canada, “we’re not there yet.”

Two new travel-related cases of COVID-19 were announced in the province today, the first since July 15. Both cases were in the Central Zone, and both people traveled together outside Canada and were in self-isolation upon their arrival.

In addition, the Nova Scotia Health Authority was advising passengers on a July 19 Air Canada Flight from Toronto to Halifax of a potential exposure to COVID-19. In a media release, the NSHA said Air Canada flight AC 626 departed Toronto at 10 p.m. and landed in Halifax at 1 a.m. on July 20.

Although some people had anticipated an announcement around re-opening to the rest of Canada, today was a day to primarily talk about masks.

Masks are mandatory in public spaces in Nova Scotia effective today. McNeil and Dr. Robert Strang, the province’s chief medical officer of health, highlighted the importance of wearing them during a Friday afternoon COVID-19 media briefing.

What’s the definition of an indoor public space? Strang described it this way:

Indoor public places can be both private or publicly owned but they’re places where the public is fully expected to be and has ready access to.

In his opening remarks, Strang said many people are wondering why they’re mandatory now and not in the spring when the number of COVID-19 cases were peaking. He said their position has changed because evidence about the virus and the effectiveness of mask-wearing by the general public has evolved.

“Adapting our approach as evidence evolves should be seen as a positive rather than that we were wrong at some point in the past,” he said.

He added that the move towards mandatory masks is part of being prepared for the likely occurrence of a second wave, not about our epidemiology as it exists today.

“We’ve all seen what’s happening around the world, and there will likely be at least a second wave and maybe more so living with COVID is part of our new reality,” Strang said. “Changing behaviour around things like masks takes time so we need to start making masks a habit now.”

Part of the province’s strategy was trying to ensure all Nova Scotians have ready access to masks. All provincial libraries and the 24 provincial museums that are currently open have non-medical masks available for free. Strang said transit, taxis, homeless shelters and Access Nova Scotia centres are among the places where they’ve distributed a “small portion” of the “well over 1 million” they’ve stockpiled. 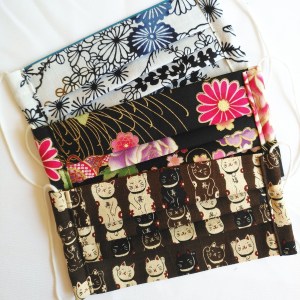 Masks made by Miyako Ballesteros, co-owner of The Ikebana Shop. Photo: Twitter

In addition, when schools reopen in September, there will also be supplies of masks at those facilities.

Those who don’t wear masks won’t be asked for proof of any existing medical condition that would preclude them from wearing one. But Strang frequently reiterated there are very few people who can’t wear non-medical masks, and he is confident “most Nova Scotians will be honest and are prepared to “do the right thing.”

There were questions about the teeth of the mandatory mask order if it wasn’t going to be vigorously enforced. Strang said making them mandatory “creates a standard” people are expected to meet.

Although people can face a $1,000 fine for defying the province’s Public Health Order, Strang said they want to avoid a heavy-handed approach and instead provide information and ensure people have access.

“There are some people that have valid reasons for not wearing a mask and we have to make sure that we’re not creating barriers to them accessing public spaces,” he said.

There were also questions about people coming into the province from outside the Atlantic Bubble and not receiving follow-up calls to ensure they’re self-isolating. Strang acknowledged there were some “gaps and challenges,” but said they’re looking at ways, including using automation, to do it more efficiently.

For now, given current resources, he said their priority for self-isolation checks is people who’ve travelled internationally — especially from the US.

The Halifax Examiner participated in the briefing via teleconference. We asked why apartment building common areas like lobbies, hallways and laundry rooms weren’t considered indoor public spaces, making them exempt from the mask mandate.

Strang said as they were drafting that part of the Public Health Order and speaking with lawyers, it was decided those are private spaces that don’t have ready access to the public. He said the “vast majority” of rental buildings require a pass or a door code to get in, so people can’t just randomly walk in off the street.

“As we worked through the legal definition around things, we came to the understanding that those didn’t fit the definition we were using of an indoor public space,” he said.

We also asked McNeil if there was any economic modeling around reopening the border and what that looked versus loosening restrictions and keeping the border closed. He pointed to the commerce and activity in Nova Scotia having been “greatly restricted,” particularly in the service sector.

“As you know if you look at the restaurants here for example in our capital city, without the cruise ships we’ve seen some uptick in activity with the Atlantic Bubble but there’s no question particularly some of our larger iconic tourism sites that they would attract people from other parts of the country,” McNeil said.

He added that data from Tourism Nova Scotia shows that a large percentage of tourists in recent years have come from outside Atlantic Canada.

“So there’s no question there’d be an economic benefit to it,” he said.

“But we’ll continue to monitor it to make sure that we can ensure that as we open up, all the protocols are in place and continue to put public health at the forefront of any decision we make.”