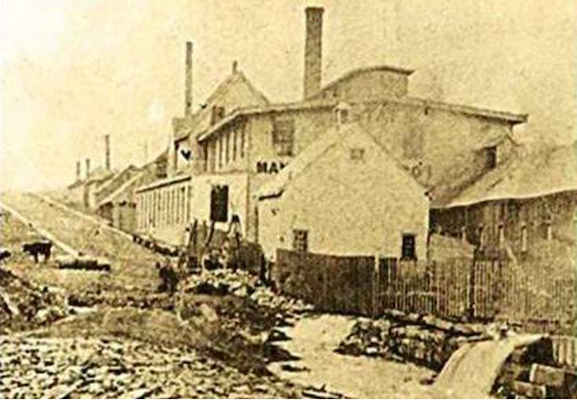 “This photo shows the bed of the inclined rail plane beside the Starr Manufacturing Plant. The peaked roof showing above the middle of the plant is the roof of the Flume House. The Starr plant was built around the Flume House and utilized the flume for power.” Text and photo from the tender document, linked to below.

No one much did anything newsworthy over the long weekend, so I’m mostly today relating info from government tender offers…..

The city is tendering for a design/build contract for the Canal Greenway Flume House in downtown Dartmouth:

This project consists of the construction of a replica of the Shubenacadie Canal Flume House and sections of Flume. A short history of the Flume House follows:

It was one of the most ambitious plans during the Industrial Revolution in British North America. An inland waterway that would connect lakes and a major river system through a series of locks, to create a link between Halifax Harbor and the Bay of Fundy. Engineers and hundreds of stone masons from Ireland and Scotland began work in 1826 and with the completion of the project in 1861, the dreams of men such as Michael Wallace, Charles Fairbanks and Samuel Cunard had been realized. The first step in the journey of the barges and supplies pulled along the Canal was the marine railway that linked Dartmouth Cove and Sullivan’s Pond. Vessels were pulled on rail lines up an inclined plane by means of cables on a drum turned by a water powered turbine, fed by water running along a flume from Sullivan’s Pond. For its time, it was a brilliant innovation. The water powered turbine was housed in the Flume House, the reconstruction of which is the scope of this Project. After the Canal ceased operations, the equipment was used by the Starr Manufacturing Plant. 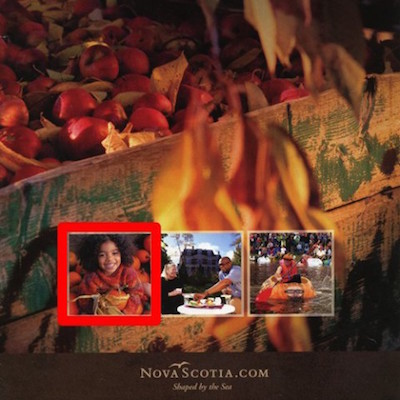 The province is tendering for a publisher of the annual Doer’s and Dreamer’s Guide, a tourism promotion pamphlet.

Back in 2009, the smiling picture of a little girl was placed on the cover of the guide. “Problem is,” I wrote at the time, “that cute kid, five-year-old Maria Lua da Silva, daughter of Paula and Azeitona da Silva, was deported last year, after her parents’ refugee claim was rejected.”

Of course refugee issues are high in mind in the current federal election.

As for “Doers” and “Dreamers,” such language infected Laurel Broten’s tax review: “A boost to entrepreneurship—rewarding risk-takers, dreamers, doers, and builders—is exactly what Nova Scotia needs,” she told us, as explanation for suggesting a massive tax cut to the richest among us.

I think there must be a common playbook for bullshit.

At 10:40 a.m. on Monday, October 12, officers responded to the 5900 block of Inglis Street for a report of a vehicle-pedestrian collision. A vehicle travelling westbound on Inglis Street struck a 5-year-old girl who had darted out into the road. The little girl was transported by EHS to the IWK Health Centre for treatment of what are believed to be non-life-threatening injuries. The matter remains under investigation, however, charges aren’t anticipated. 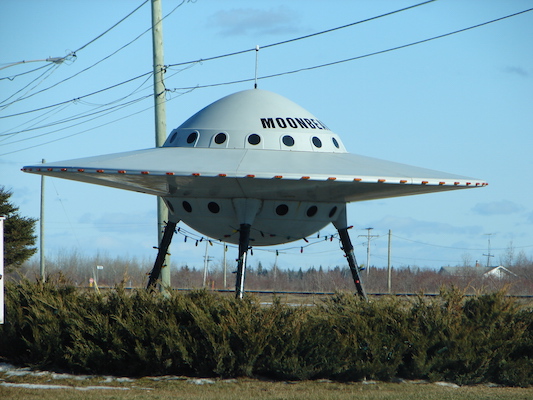 See, you can’t say the words “Shag Harbour” without thinking “UFO.” Neither can John Demont.

Has anything else ever happened in Shag Harbour? Well there’s this, from 2007:

Terry Banks and his wife, Lisa, of Shag Harbour, near Shelburne, were to stand trial in Nova Scotia Supreme Court. But Terry Banks pleaded guilty to charges of fraud over $5,000.

Charges against his wife were dropped.

The former fish company owner is accused of defrauding the Canadian Imperial Bank of Commerce of $5 million through an elaborate scheme involving fake invoices routed through the bank between 2000 and 2001.

According to court documents, both the RCMP and the FBI investigated the allegations surrounding the ESD fish company in Shag Harbour.

But let’s not concentrate on people in Shag Harbour scamming the public. Better to celebrate the UFO museum.

I’ve been a volunteer at the Truro SPCA for two years. It is a good place. Those who work there are wonderful, caring people.

My gig is mostly the cats. I play with them, give them affection and try to socialize the ones afraid of people. You’d think it might be a sad place, with 50 or so abandoned cats. But it was just the opposite. The staff went out of their way to make it like a second home for these cats. It was heart-warming to go there and see cats and kittens running around, chasing toys, climbing on cat jungles, jumping in and out of cat tents, or just lounging on top of the cages, taking it all in. The “long-timers” were given the run of the place and could be found hanging out in the laundry room or in the office with the girls. There were always lots of other people visiting and playing with the cats.

A few weeks ago, there was a drastic change. All the cats were in their cages and it was very quiet, with the exception of a number of cats crying to be let out. This is because the provincial SPCA has decreed that in order to decrease the spread of infection, the cats are not to be let out of their cages. Ever. If you were to contact them (1-844-835-4798), the official line is that they are allowed out. What they might not tell you is that you must get a bucket of Javex solution and mop the entire room before letting another cat out. They will also say they are planning a free-roaming room, but this will only be for a few cats. It doesn’t help the other 45 cats.

The Truro SPCA often has cats for up to a year. Locking these cats in a 3-by-3-foot cage for such prolonged periods of time, for any reason, is disturbing, misguided and the epitome of cruelty. I implore the provincial SPCA to consider the psychological welfare of the cats in its care, to reconsider this decision and explore a more humane way to combat the spread of infection.

Standing Committee on Economic Development (1pm, One Government Place) — the committee will be asking Colin MacLean of the Waterfront Development Corporation and Stephen Duff of Innovacorp about the Ocean Innovation Centre, which will bring prosperity forever, amen.

Trade Centre Limited is tendering for a contractor to supply temp workers for general maintenance duties, moving around furniture, setting up and breaking down before and after conventions, and the like, because why hire full time staff when you can get Joe’s Temp Agency to supply desperate people on the cheap? Regardless, I found this part of the tender offer, er, telling:

Please note: events at the WTCC [World Trade and Convention Centre] and SBC [$48 NSF Fee Centre] are rarely cancelled due to inclement weather. Preference, therefore, is given to those companies who provide transportation to the temp staff scheduled for events should public transportation not be available.

Greenaway revisits Rembrandt’s The Night Watch in this documentary that examines the aesthetic context and the politics of the period.

Far more interesting is the description given on the trailer posted to YouTube:

J’Accuse is an essayistic documentary in which Greenaway’s fierce criticism of today’s visual illiteracy is argued by means of a forensic search of Rembrandt’s Nightwatch. Greenaway explains the background, the context, the conspiracy, the murder and the motives of all its 34 painted characters who have conspired to kill for their combined self-advantage. Greenaway leads us through Rembrandt’s paintings into 17th century Amsterdam. He paints a world that is democratic in principle, but is almost entirely ruled by twelve families. The notion exists of these regents as charitable and compassionate beings. But reality was different.

The university has tendered for plagiarism detection software. Such software raises ethical issues; and especially (by my way of thinking) this one, raised by Boone Gorges way back in 2007:

Back when I was in college, just as the internet was coming to life, I knew a guy who lived off the proceeds of writing term papers for students. Michael was the only true anarchist I’ve ever met, and also likely the most well-read person I’ve ever met. He would spend most of his day in the university library, researching whatever subject a student was paying him to write about. Each paper was unique, and therefore more difficult to be discovered as plagiarism — certainly not by today’s plagiarism detection software. I guess Michael’s speciality was dumbing down his writing so it actually sounded like it was written by some East Bay car dealer’s son or whatever.

I don’t know that there’s a point to that anecdote. 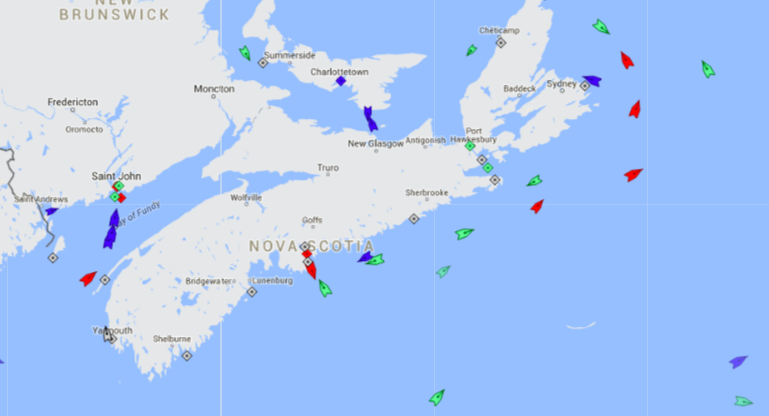 The seas around Nova Scotia, 8;30am Tuesday. Map: marinetraffic.com

The cruise ship Pearl Mist, with up to 210 passengers, will be in port today.