“The majority of Northern Pulp’s 90 salaried employees will be laid off over the next few months with the earliest being effective January 31, 2020. Previously, Northern Pulp issued layoff notice to Unifor, the union representing hourly employees at the facility.

The company expects that only twenty percent of its workforce will report for work as of February 1, 2020, to continue the safe and orderly hibernation of the facility. In addition, a small number of employees will focus on the Environmental Assessment for a new effluent treatment facility and ongoing facility monitoring and maintenance.” 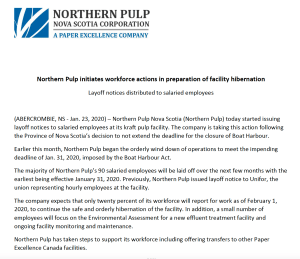 It’s unclear from the statement whether the “twenty percent” of the workforce includes the entire 330 people (management and union) who were working at the Pictou County mill last month or reflects only the hourly-paid workers who numbered about 230, according to Shelley Amyotte, a Unifor spokesperson. About 180 unionized employees have already received layoff notices with the remaining people expected to continue working onsite to winterize the operation. The company has not yet responded to a request for clarification. Northern Pulp says it has offered workers job transfers to its mills in western Canada.

Progressive Conservative leader Tim Houston issued a statement via Facebook within this last hour lambasting the provincial government for “failing to plan and prepare for the closure of the mill”. He noted Cabinet has met only once since the mill closure was announced on December 20 and the Opposition leader accused Lands and Forestry Minister Iain Rankin of being “in hiding”.

The PCs are suggesting a Committee of MLAs from all three political parties be appointed to travel the province to meet with mill owners and people affected by the closure of Northern Pulp.

Conservative forestry critic Tory Rushton (MLA, Cumberland South) read a list of 16 questions the PCs have been asking and are demanding the government answer with respect to transitioning the forestry industry. They include: who is eligible for financial assistance under the Transition Fund? What impact could the $50 million Transition Fund have on the softwood lumber agreement with the United States? Will the Province designate the Brooklyn Energy biomass plant a “must run” facility on a short-term basis to provide a replacement market for pulpwood/wood chips? Has the government had conversations with NS Power? (The PCs appear to support this if it does not impact the softwood lumber trade agreement.)

Today’s Cabinet meeting was cancelled although Thursday is the scheduled meeting day.