Using the tagline “It’s about damn time,” a five-day social media campaign was launched Thursday to raise awareness of eating disorders and to seek input from Nova Scotians about what they believe needs to change.

The ‘It’s about damn time’ campaign theme was inspired by a popular TikTok dance and song by Lizzo. The executive director of Eating Disorders Nova Scotia (EDNS) said it’s also the perfect fit for World Eating Disorders Action Day, which was Thursday.

“We were talking about how we’ve been involved in this for so long, haven’t seen a lot of changes, and that things are getting worse and not better,” Shaleen Jones said in an interview on Thursday afternoon.

“I mean, it’s about damn time we saw some real changes, especially with the new report from CIHI showing the number of folks being hospitalized. So part of it is frustration, but a part of it is also that we know some things that are working really well and let’s get more of these supports.” 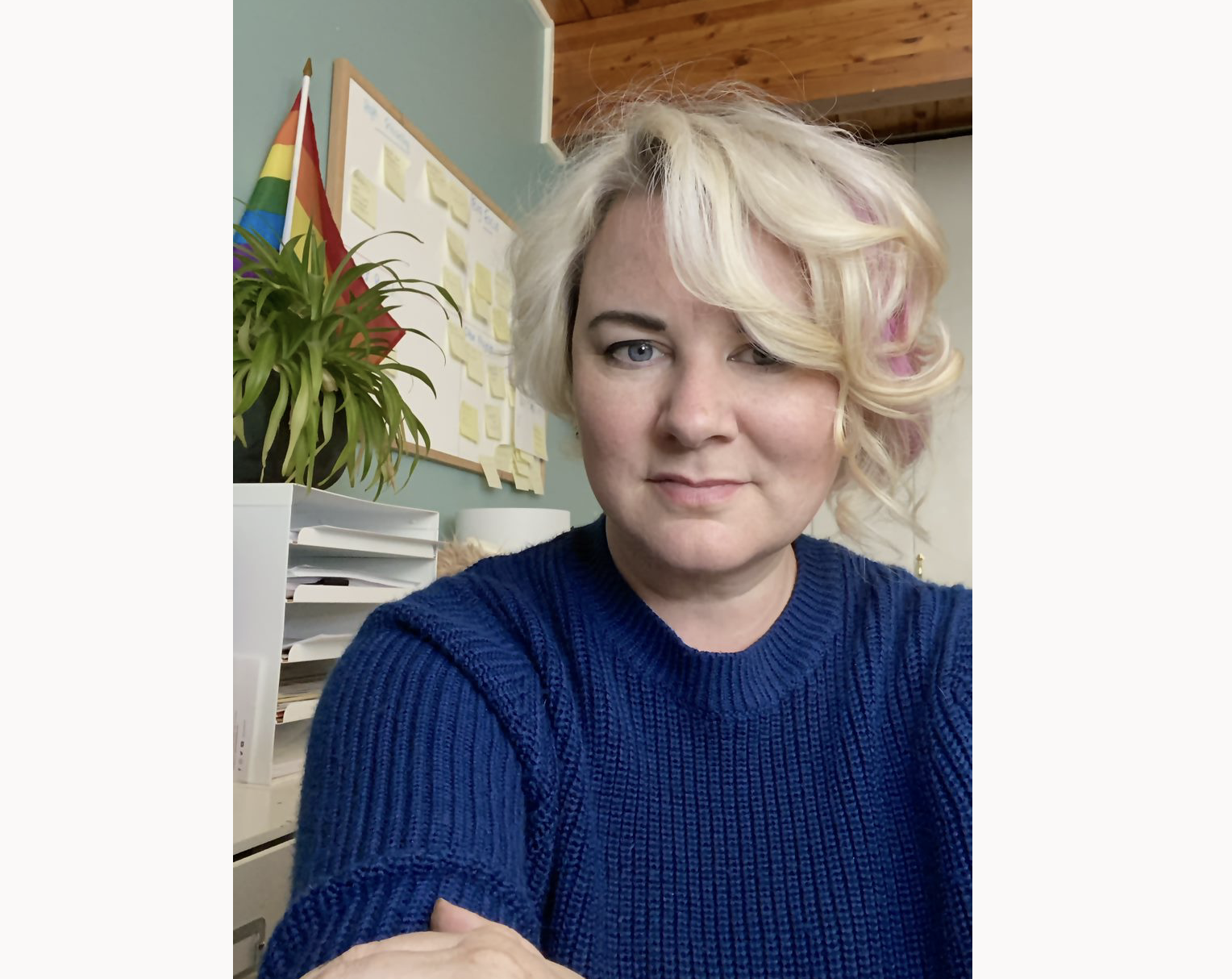 Data released by the Canadian Institute for Health Information (CIHI) last month found that hospitalizations for eating disorders among young women jumped by more than 50% during the pandemic.

“The increase in hospitalizations for youth due to an eating disorder during the pandemic is striking and concerning. It is also a significant under-representation of the true increase because research shows that eating disorders aren’t just a disease of the affluent,” Dr. Leanna Isserlin said in a news release.

Isserlin is the psychiatric director of the Child and Adolescent Eating Disorders Program at Ottawa-based CHEO, a pediatric health care and research centre.

“Many young people from marginalized communities and less-affluent neighbourhoods have difficulty accessing treatment for eating disorders and would not be reflected in these data,” Isserlin said.

While Nova Scotia numbers from the IWK Health Centre weren’t represented in that data, Jones said the situation is undoubtedly similar based on the significantly increased demand for their services since the pandemic began.

In February, Jones shared that the non-profit had experienced a 900% increase in demand for their services over what they anticipated in 2019 (reported here).

Last June, the IWK’s chief of psychiatry Dr. Alexa Bagnell told the Examiner that eating disorders were the one area of mental illness where they’d noted a “consistent increase” throughout the pandemic.

“I really do trust our data and it is real,” Bagnell said at the time. “Looking across all our categories of why people are seeking service that’s the one that I can say ‘Yeah, that’s a real change with the start of the pandemic.’”

‘We can prevent so much suffering’

Although eating disorders are the third most common mental illness and the most deadly, Jones said national conversations and initiatives on mental health have largely excluded eating disorders.

“That means what they look like, how they appear, and the circle of suffering they cause. It’s also important for health care providers and others to be aware of these as really common experiences that are really complex, because if you can catch them early, we can prevent so much suffering.”

Jones said eating disorders research, training, and treatment has been chronically underfunded for decades. Her organization provides online resources, access to nutrition counselling, and peer support services⁠ — including for family and friends ⁠— a mentor program, and numerous groups and workshops. Last summer, they hired a registered clinical therapist to the team.

“We absolutely need an investment into this industry and this field. Out of every $6 we need to run the organization, $1 comes from the province,” Jones said.

“So we would love to see more of an investment from the province, of course. And more broadly, we need to train folks to treat eating disorders…and let’s scale up things that we know are working.”

The EDNS social media campaign kicked off Thursday and will wrap up Monday evening with a virtual summit featuring several speakers that will be open to the public.

Jones said the intent of their social media campaign is to seek information from Nova Scotians about what they think needs to change and what actions can be taken. Actions could include increased access to support and treatment, standard training for health care providers, addressing weight bias and bullying, increased funding, and challenging diet culture.

“And for those who are at risk, we know that restricted eating increases your risk 18 times. There’s such a biological aspect to these illnesses.”

Jones is encouraging Nova Scotians to visit their social media platforms, to watch their video, enter their contest, and join the conversation between now and Monday evening. The initiative wraps up Monday when they host a 7pm virtual summit called ‘Eating Disorders: It’s time for action.’ 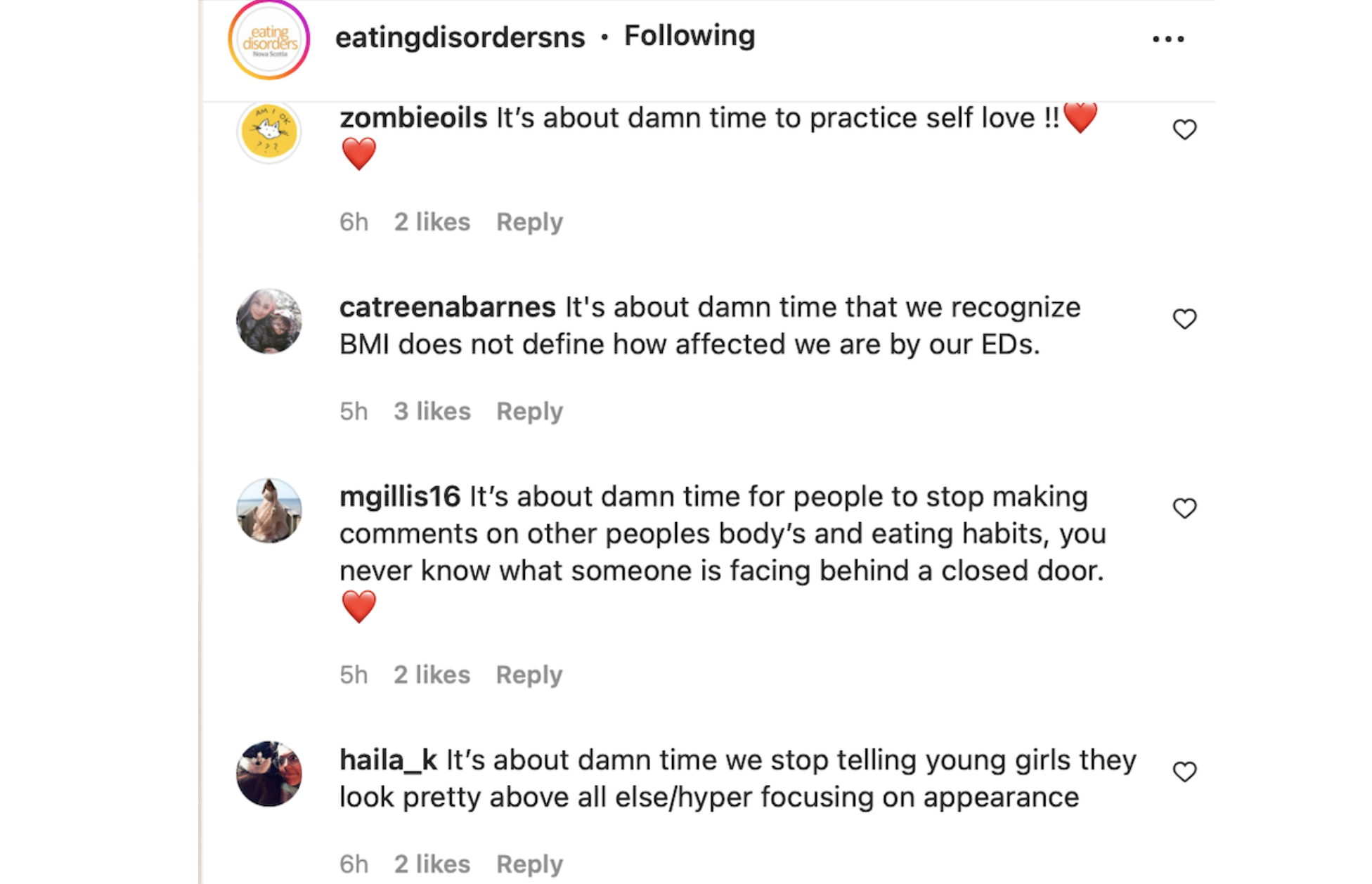 A sampling of replies to the EDNS Instagram account on Thursday afternoon as people joined the “It’s about damn time” conversation around eating disorders Photo: EDNS/Instagram

“I want people to leave the session feeling hopeful. This is a really heavy topic and there’s a lot that needs to be changed,” she said.

“There’s a lot of folks out there who have fully recovered who can share their experiences about what has helped them move forward, since we really wanted to keep the focus on what are some tangible things that they can do right now to help themselves and their loved one move forward.”