You are here: Home / Featured / No one cares that you want to bicycle across Canada

High school students across Nova Scotia are demanding action on climate change, and will be walking out of classes today for mass demonstrations. In Halifax, students will march on MP Andy Filmore’s office, City Hall, and Province House. They are meeting at the gazebo in the Public Gardens at 12:30pm. Details here.

Richard Starr has a good essay on Extinction Rebellion and all things climate change. A short excerpt (read the whole thing):

This Hobson’s choice is being presented in the media as the likely and legitimate ballot question in the fall election even as the latest warnings from the international climate change watchdog say drastic cuts are needed between now and 2030 to have any chance of preventing global temperatures from increasing to even more dangerous levels.

As you all know, at the time of the global school strike for climate change, my daughter Willa was told by her principal that marches accomplished nothing. I wrote a strong letter which many of you circulated, and you all gave a lot of support for which I thank you! A Canada wide school strike is happening in a couple of days and my daughter and her friends have been putting up posters for it in their school, which have been taken down by their principal, Joe Morrison. Today my daughter and her friend were brought into the office and told that if they continue to put up posters for the strike, they will be suspended from school and that if her friend continues with school strikes, he will no longer be permitted to be co president of the student union. Just to be clear, this is Citadel High School in Halifax NS whose principal is Joe Morrison and whose vice principal for grade 11 is Leslie MacIntyre. As I’m on the other side of the planet, I can’t get directly involved. I’m just putting it out to the community.

Young people are quite rightly concerned about their future. The petty complaints such as those of school bureaucrats are immaterial to the issue at hand.

“High school rugby is being shut down in Nova Scotia,” reports CTV:

Officials with Rugby Nova Scotia say thousands of students, parents, coaches and match officials will be affected by the shutdown.

Meanwhile, Cape Breton Victoria Regional Centre For Education confirms an international student who attends Sydney Academy was injured during a rugby match yesterday. There’s no confirmation there’s any link between the injury and today’s decision to cancel high school rugby.

Ashley Morton, a former rugby coach, points out in a Twitter thread that the cancellation will affect girls more than boys.

Today's cancellation of high school rugby in Nova Scotia is way more gendered than it may appear. There were far more schools that had girls' rugby than boys', so way more girls lost their sport today than boys. It was also the only full-contact team sport available for girls…

Today’s cancellation of high school rugby in Nova Scotia is way more gendered than it may appear. There were far more schools that had girls’ rugby than boys’ rugby, so way more girls lost their sport today than boys.

So today, the NSSAF stopped some athletic young women — and only women — from being able to afford to go to university. That is intensely frustrating.

They also killed the only sport that fundamentally values such a different set of body types. I’ve coached high school girls’ rugby, and I remember walking down the halls of a high school thinking “there isn’t a girl here I wouldn’t be happy to see at try-outs.”

Teenagers — especially teenage girls — are starving for a place where their diverse physical strengths are all valued.

The NSSAF today made a decision based on an insurance company’s report, that gave no weight or importance to the values of the sport, and in doing so preferentially trashed women’s sport. What a horrible choice.

Many young rugby players gathered at the Sunnyside Mall to protest the cancellation, and most were girls:

This about sums up how highschool rugby players are feeling about the #NSSAF decision to cancel the season. The NSSAF hasn't provided an interview, yet. pic.twitter.com/66RLwXwwIx

The concern seems to be around concussions. I’m the first to admit that I know nothing about this, but I suspect that there’s a big difference between concussions in rugby and concussions in the padded sports like football and hockey — with the latter being far worse.

When I was a kid, I ran cross country and track. I was never a star — mostly I placed fifth or sixth for my team at cross country meets, with the occasional exceptional third or fourth) — but the sport provided a sense of community and belonging, taught me to test and listen to my own body, and provided a much-needed avenue for desired solitude at the same time. Running stayed with me most of the rest of my life (until a few years ago, when my knees gave out, but I’m still struggling to get back into it), and I’m not sure I would have quite survived had I not had it to fall back on.

Which is to say, sport is important. I hope cooler and more reasoned heads prevail on the rugby issue.

The Herald made two fundamental bone-headed mistakes with its obituary page on its website today: it built a template using inappropriate Lorem Ipsum (dummy text to be replaced with the correct text later) and then failed to copyedit the finished product before hitting “publish.” The result is regrettable, to put it mildly:

This is a lesson to journalists everywhere. Readers might ridicule dummy text slipping through — it shouldn’t, but mistakes happen — but they’ll skip right over ridicule and go to anger if that dummy text is inappropriate. “Insert obituary here” gets one reaction; “Neil died, boo” another. Always assume your dummy text will slip through, and write it with the expectation that the public will read it.

Beyond that, everything should be copyedited. Obituaries, however, are especially sensitive and a big money maker besides; extra copyediting attention should be given to them.

Ah, I saw this at 6am, and by the time we publish at 9am, the page has been removed.

Also in the Herald is “Contributed” content, presumably contributed by the John Volken Academy:

Four years ago Mathew Fee Jr. texted his mother at 4 a.m. saying he doesn’t know how to live. Now the recovering addict is living by riding a single-gear BMX bike across Canada to raise awareness for addiction recovery.

“Ultimately I want to be able to show people that there is hope,” said Fee Jr. “That you can find your way out of addictions and get out of that dark place. There is a little bit of light.”

Fee Jr. is riding from Halifax to Victoria, B.C. He started on Monday with a police escort from Province House. He expects to arrive in Victoria in mid-October, riding 50 to 100 kilometres a day depending on hills and tailwinds. He has had this dream since he was a kid and thought it would be a good way to raise awareness for addiction recovery.

Halifax police got in on the action too:

@HfxRegPolice Traffic Unit had the privledge of escorting 33 Y/O Mat Fee of Terrace, BC from Province House out of town this afternoon. Fee is biking from Hfx to the Victoria Legislature in BC on a BMX bike in support of John Volken Addictions Academy. Safe biking, Mat & crew!! pic.twitter.com/B1vJvJBdzV

I drove to Truro yesterday and came upon the van and bike rider on the 102, just past the Stewiacke exit. The truck was following the cyclist, who was going regular cycling speed, maybe 20 or 25 kilometres/hour. The truck was half on the shoulder and half in the right lane, but kind of shifted more into the lane as it crossed bridges and such. The cyclist was entirely in the lane.

This was quite dangerous. I was at the rear of a group of vehicles as the group crested a hill and came upon the truck/cyclist combo. The cars in the right lane had to swerve suddenly into the left lane, and all the drivers came frightening close to each other. I slowed way down to give everyone room, but feared getting rear-ended by some other vehicle coming over the hill behind me.

I don’t know if this is a restricted highway, but I’m guessing it is — Highway 2 runs parallel and is a better route for bikes. In any event, even if bikes are allowed on the 102, they should be on the shoulder and not creating this hazard. What is the John Volken Academy thinking? Such a sense of entitlement.

And can we revisit that “crossing Canada for charity” thing? As I’ve written before:

Not a week goes by when some young person, usually a college student, sends me an email about hiking/bicycling/pogo sticking/whatever across Canada/around Nova Scotia/whatever “to raise money” for some charitable cause. It never makes sense to me. If they’ve got the time to pogo stick across Canada, why not just work some stupid minimum wage job and contribute all the proceeds to the cause — you’d make more money. The emphasis seems to be on the ego-gratification, and only secondly on the cause.

Terry Fox was inspiring but everything since has been, well, under-whelming. I mean, ride your bike across Canada if you want, but don’t claim some higher purpose for it, and don’t risk causing a multi-vehicle pileup on the 102. 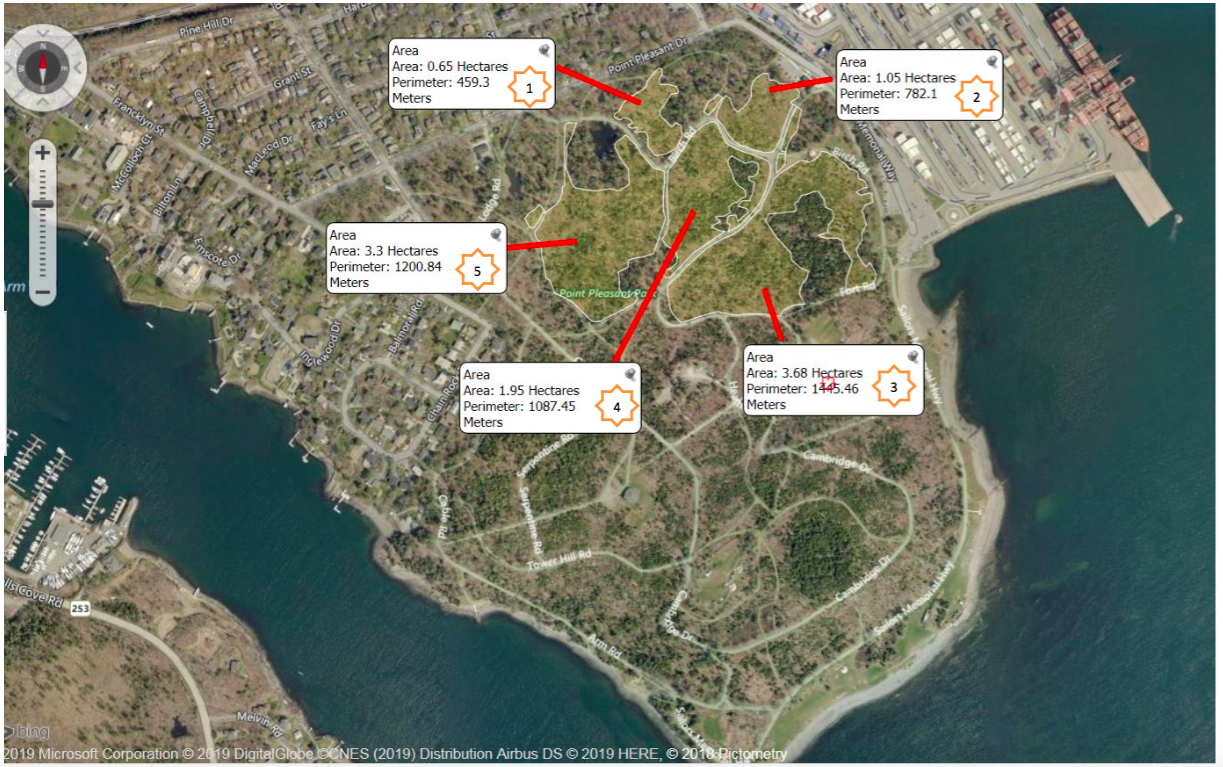 This morning, the city issued a Request for Quotations for forest thinning within Point Pleasant Park. The particulars:

Area to be treated in 2019 is 10.63 ha. and comprises 5 separate blocks. See maps [above]. Work to be completed prior to July 31, 2019.
Specifications for Spacing/Thinning in Point Pleasant Park:

2) All stem cuts are to be left with a horizontal finish cut completely through, and stumps shall be 7.5 cm (3″) or less in height.

3) Trees/brush to be cut and dispersed with most of their surface area in contact with the ground.

4) Brush shall be pulled back from wet areas (streams, vernal pools, ponds, etc…).

5) Brush is not to be left within 10 Metres of a park roadway, and not within 5 meters of foot paths. Brush shall be pulled further back into the woods and dispersed or may be chipped and blown back into the forested area.

8) When stump sprouts are the tree of choice, the 2-3 sprouts with best form and dominance will be left.

9) Inferior quality stems are to be removed even if a less desirable species is left in its place.

My trip to Truro involves a story that will take some time to get into, so while I worked all day yesterday, I have nothing to show for it this morning. On top of that, I found myself fighting off some weird throat infection last night, and this morning there’s really nothing I particularly want to write about. So, sorry this Morning File kind of sucks. I’ll work on doing better.