You are here: Home / Featured / No clear answers about the future of long-term care 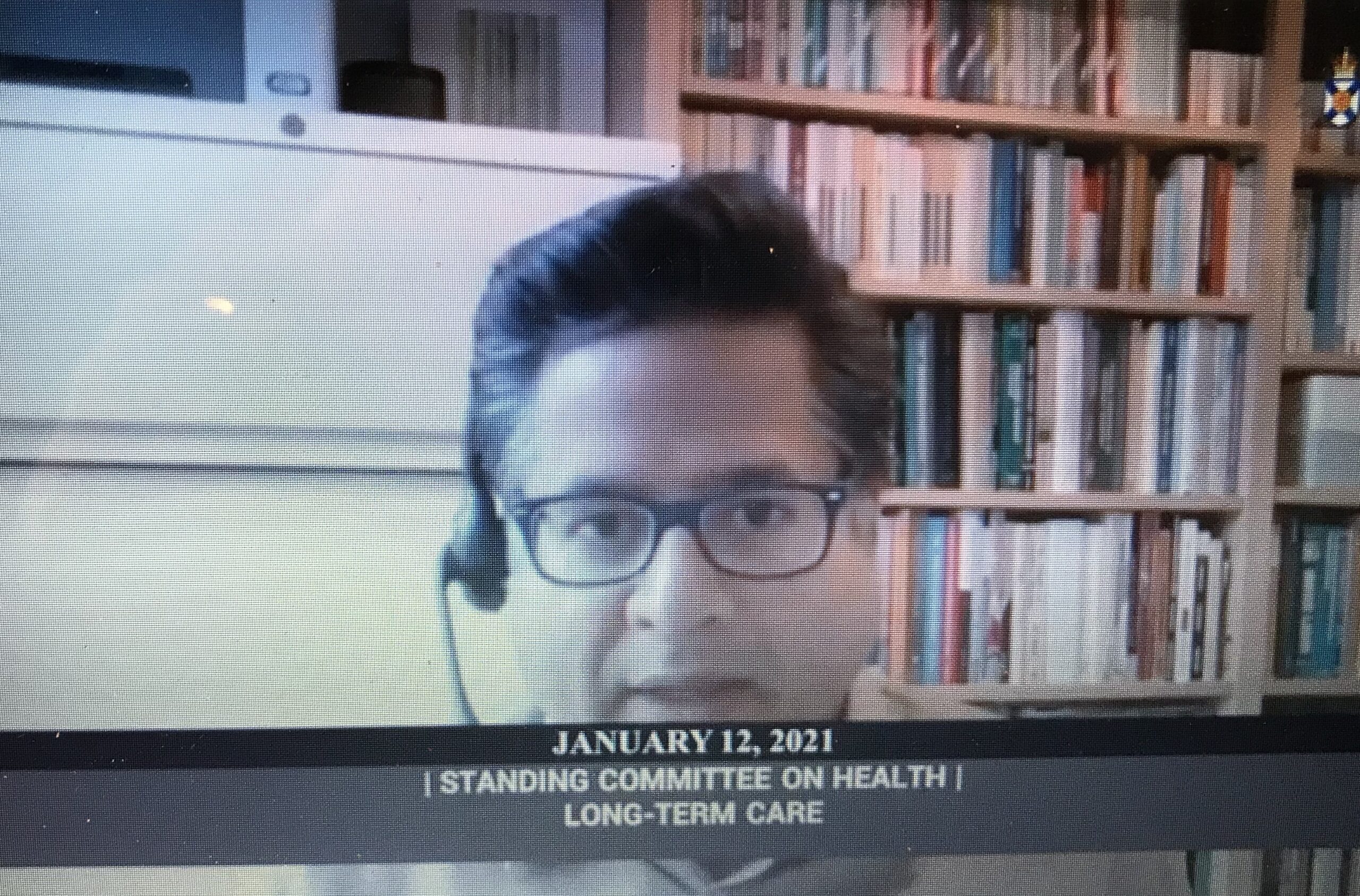 “The pandemic has highlighted the need for urgent change in how we provide long-term care. We know there are staffing challenges in our facilities, we know we have infrastructure that is aging quickly, and we know we need more beds,” said Deputy Health Minister Dr Kevin Orrell in his opening statement to the legislature’s Health Committee meeting yesterday.

That said, the deputy minister offered few clues during the question period about when and how meaningful change could take place. “Enough Talk” was the name of the paper released by the Nursing Homes Association of Nova Scotia last July. Action is required, is what witnesses representing nurses, continuing care assistants, nursing home workers, and nursing home operators told the MLAs from all three political parties.

“What happened at Northwood [the death of 53 residents from COVID-19] was a tragedy but it was preventable,” said Jason MacLean, president of the Nova Scotia Government Employees Union. “It was not the workers’ fault but I believe it was the government’s. In our report ‘Neglecting Northwood,’ we clearly outlined the systemic problems that came to light during COVID. Including the fact the management at Northwood approached this government for three consecutive years asking for funding to modernize their facility to make it safer for residents and staff. Those requests were denied.”

MacLean described the long-term care system as “an after-thought government must invest in to reform.”

The Canadian Union of Public Employees (CUPE) represents 5,700 workers in long-term care facilities in Nova Scotia. It offered the government and Opposition parties a three-point plan for improvement.

(1) Address chronic staff shortages for Continuing Care Assistants by increasing their pay from $18.96 an hour. These workers are often forced to work overtime and denied vacation. “The solution is not the creation of another unskilled CCA assistant that is paid at a lower rate,” said Govind Rao, a researcher for CUPE’s Atlantic region. Rao said the way to recruit more people is to increase the pay as both Quebec and British Columbia have successfully done this year, with both provinces now paying over $20 an hour.

(2) Increase staffing levels by hiring hundreds more people (including nurses) to enable nursing homes to provide each resident with 4.1 hours of care each day, a standard promoted as “best practice” in published studies for 10 years. Most nursing homes in Nova Scotia are funded to provide 2.45 hours of care a day, a benchmark that has not changed since the early 1980s.

Rao described an experiment last January among staff at Glen Haven Manor, a 202-bed facility in New Glasgow. Staff came in on their day off to increase the level of staffing from 2.45 hours per resident to 4.1 hours. “Suddenly, staff had the time to talk with residents, to brush their hair. There were no falls during this period and no behavioural incidents that resulted in our members being beaten.”

Deputy Health Minister Orrell said the province is not prepared to commit to 4.1 hours of care a day because nursing homes have residents who require different levels of care and operators need flexibility around staffing and “no one -size fits all.” Orrell told the Committee the Department of Health has issued a Request For Proposals for a data-tracking tool called InterRAI which will measure workload and the frailty of residents.

Nova Scotia Nurses Union president Janet Hazelton accused the government of foot-dragging. She said Ontario’s experience shows unless staffing ratios are legislated, taxpayer money can be diverted to other areas. Hazelton, who retires this spring, says the province already has enough data because Shannex — the largest nursing home operator in the province — has been using InterRAI for several years now.

It will be at least two years before the province has data from the tracking system and that’s too long a wait, according to Michele Lowe, managing director for the Nursing Homes of Nova Scotia Association which represents about 85% of the province’s 94 homes.

“We have advocated for an increase in funding and there is no question we need more staff,” said Lowe. “But enshrining in legislation a defined number of hours per patient is a challenge and a divisive topic. Some nursing home operators agree but others do not because they are concerned by what could happen in 5-10 years time.”

She said that 4.1 hours may not be enough, as the number of residents with dementia continues to grow. For example, Lowe said there are some homes in the province which receive government funding to provide 4.1 hours of care per day. However, during the first wave of COVID, a tracking tool used at one such home showed residents needed 5.5 hours of care.

While there’s disagreement over what staffing ratio should be written into legislation, CUPE’s Rao disputed Deputy Orrell’s position the province needs more data before hiring more staff. “Our position is it shouldn’t take another two years but is something the government should be able to do in six months,” said Rao.

(3) Operate long-term care as part of the public health system. “We don’t accept the idea that someone can walk in with millions of dollars and start-up a private hospital. Why do we think it is morally acceptable to profit off our most vulnerable residents in long-term care? Every public dollar spent in Nova Scotia should go to care, not to pad profit lines.”

Both the NDP and PC political parties have promised to spend hundreds of millions of dollars ($465 million in the case of the Tories) to provide every long-term care resident in the province with their own room and bathroom. That’s currently 7,400 residents in care and another 1,533 waiting for a placement.

Since the 53 deaths in Northwood, where the spread of the virus was exacerbated by the fact the majority of rooms and bathrooms were shared by two or three people, Orrell said the province has “moved quickly” to eliminate rooms with three or more residents. The number of shared rooms or “doubles” in nursing homes across the province now stands at 42%, an improvement from 54% when the pandemic began.

All new homes built since 2007 are required to have single rooms but the McNeil government has authorized the addition of only a few hundred new rooms since forming government in 2013. Most have been announced in the past year. The focus has been on investing heavily in homecare and community supports to keep seniors in their own homes longer. It’s a strategy Orrell said must continue, in addition to sending more people to “under-utilized residential care facilities” that house people with disabilities and “upgrading and improving” existing nursing homes.

True. There are plenty of issues and what Michele Lowe with the Nursing Homes of Nova Scotia Association has described as “lack of a vision.” PC long-term care critic Barbara Adams asked what happened to the five-year Plan for Continuing Care the Liberals got underway in 2015? Orrell replied that since he arrived in April, the recommendations in the 2018 Report from the Expert Panel on Long-Term Care “had taken precedence” from previous reports. That all 25 recommendations are in the process of being implemented. In other words, the much promised Continuing Care Strategy has been given a quiet burial.

Meanwhile, with the help of the federal government, the province has increased funding to step up infection prevention and control, established Regional Care Units for nursing home residents who test positive for COVID, and mobilized rapid response teams as well as a staffing bullpen that nursing homes can draw upon in the event there is another outbreak of the coronavirus. Fingers crossed we can dodge that bullet.