You are here: Home / Featured / News from the “under-explored global petroleum province”

The Nova Scotia justice department has been asked to release documents related to the death of Clayton Cromwell, who died of a methadone overdose in 2014 in custody at the Central Nova Scotia Correctional Facility, reports Sherri Borden Colley for the CBC.

The request comes from privacy commissioner Catherine Tully, who found that the information the department was choosing to withhold from journalists did not contain “confidential policies and procedures” as the department had claimed.

Of course, Tully’s request is non-binding, so the department of justice can simply ignore it.

Also troubling is the timeline here:  The original request for this information was made four years ago, so the review took at least three years.

Borden Colley spoke to lawyer Devin Maxwell who is representing Clayton Cromwell’s family in a lawsuit against the province.

Maxwell points out that the Act was brought in to Nova Scotia, and other provinces, to make government more transparent. But he said the result has been the opposite.

“I think that the government uses the Act now to find reasons not to disclose information and I don’t think that was the purpose or intention of the Act in the first place,” he said.

The family has already received investigation reports about the death from the Justice Department and Halifax Regional Police. Still, Maxwell said, the circumstances behind Cromwell’s methadone overdose are unclear.

‘I think there is definitely a public interest in having this information available to everybody so they know what’s going on in jails and the government, certainly, is not forthcoming in turning over information.”

2. Province has contributed $6 million so far to help Northern Pulp clean up

Nova Scotia taxpayers have contributed $6 million toward design work and engineering studies for a new wastewater treatment plant that will handle effluent discharged from the Northern Pulp paper mill in Pictou County.

Opponents to the cleanup plan see a problem because the province is a financial investor in the project while at the same time being responsible for conducting an environmental assessment of the plan. They are calling for a federal assessment.

Back in November 2017, the Halifax Examiner published Part 1 of Linda Pannozzo’s “Dirty Dealing” series, which gave a glimpse of the Northern Pulp cleanup plan:

Northern Pulp is planning to pipe the “treated” wastewater — upwards of 70 million litres per day, equivalent to 28 Olympic-size swimming pools — to an underwater site outside of Pictou Harbour, in the Northumberland Strait, a prime lobster fishing ground. With the province opting for a faster environmental review of the project, one that requires much less time or public consultation, many are wondering if it’s already a done deal and why other treatment options — ones that don’t use waterways as a dumping ground — aren’t also on the table.

The liquidation of OpenHydro appears to be on hold while the Irish High Court explores the possibility it can be resuscitated, reports the Irish Times:

“Ms Justice Miriam O’Regan on Friday appointed insolvency practitioner Ken Fennell as interim examiner to Dublin-based OpenHydro Group Ltd and its subsidiary Open Hydro Technologies Ltd after being informed that an independent experts’ report had shown the companies had a reasonable prospect of survival if certain steps were taken.

These include securing new investment, restructuring the group and the appointment of an examiner who would put together a scheme of arrangement with the group’s creditors that would allow it to survive as a going concern.” 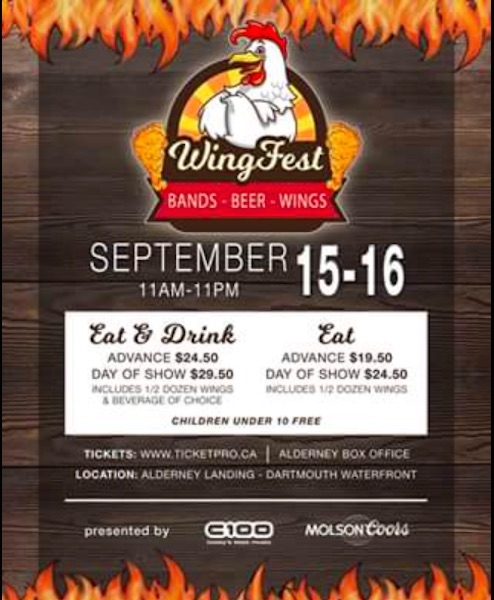 This item is written by Tim Bousquet

The “WingFest” scheduled for September 15 and 16 at Alderney Landing is a production of Harold and Michelle MacKay, confirms municipal councillor Sam Austin. Austin represents Dartmouth at City Hall, and in that capacity sits on the board of directors of Alderney Landing.

Harold MacKay, you’ll recall, was the promotor for a series of ill-fated concerts on the Halifax Common that saw Trade Centre Limited president Scott Ferguson, Mayor Peter Kelly, and CAO Wayne Anstey conspiring on an improper loan scheme from a moribund city bank account in order to provide MacKay with working capital to produce the concerts. The whole scheme came crashing down when Kid Rock tired of MacKay and the Black Eyed Peas show failed to attract enough ticket-buyers; the city ate $400,000.

MacKay followed that failure with another: the short-lived Downeast Beer Factory, which is the subject of a civil lawsuit and two small claims court actions.

The WingFest was first promoted on Alderney Landing’s Facebook page last Tuesday, August 14, with a poster announcing “Bands Beer Wings.” The bands weren’t named. Nor was the beer, although the event is “presented by” Molson Coors. It also appears that even the wings aren’t certain; a Kijiji page is looking for potential wing vendors: “If you think you make great wings this is the BEST OF HALIFAX wing event. Celebrity judges will announce the winners. Please contact ASAP.” (“Best of Halifax” is a marketing event of The Coast alt weekly newspaper; it doesn’t appear that The Coast is associated with WingFest.)

After the Facebook event was created, a steady stream of criticism followed.

“Not much of a Fest if you only get six wings,” noted John Gallant.

“I signed up for an account on the ticket seller’s website, just to see how much it would cost,” wrote Steve Tonner. “The total was 24 dollars, for one ticket, good for one day only, and that entitles me to … 6 wings. Seriously? Four dollars per wing.”

“A half-dozen wings for $20?” asked Matt Higgs. “I’ll stick to Your Fathers Moustache on Thursdays! Fifty cents a wing, basically an eight of the price of WingFest.”

On Thursday, whoever operates the Alderney Landing Facebook page popped in to say that “the [unnamed] organizers have listened to concerns and questions about WingFest. They want this to be an affordable and positive public event, so there is a price and event planning restructuring taking place. Please stay tuned for an updated price package and event plan!”

5. Saudi medical residents exodus and how it affects health care

It’s not just Dalhousie medical school that will take a hit from the exodus of nearly 60 Saudi medical residents from Nova Scotia. The Nova Scotia Health Authority is predicting a few weeks of “minor delays” for scheduled surgical procedures, reports the Canadian Press in StarMetro Halifax.

I sincerely hope the “minor delays” prediction holds true, but there’s going to be another consequence besides rescheduling surgeries. As Elizabeth Chambers pointed out yesterday in her piece in the Halifax Examiner (behind the paywall), the loss of Saudi medical residents will mean a financial hit for our health care system:

Over time, the Saudi scholarship program has become an unacknowledged subsidy scheme for Canada’s healthcare system, and participating Canadian medical schools like Dalhousie. The Saudi physicians have provided medical service at no cost to hospitals and other facilities where they train, and their scholarships have been a significant and reliable revenue stream for medical schools.

A 25-year-old man has died after a crash in Dartmouth, N.S., on Monday evening.

Halifax Regional Police say his motorcycle and another vehicle collided at the intersection of Main Street and Ridgecrest Drive at about 8:50 p.m.

7.  Nova Scotia and Morocco agree to look for oil together 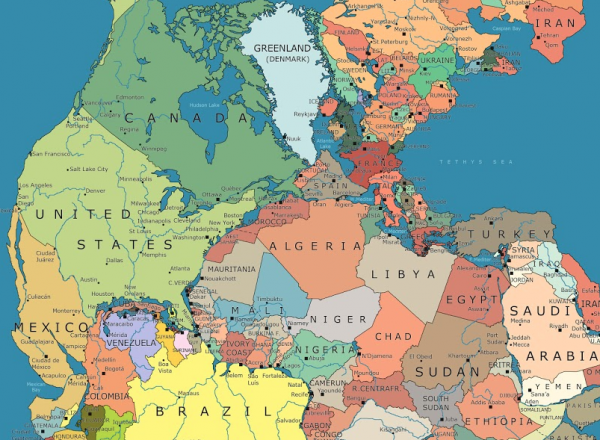 ‘Pangea Politico’ by Massimo Pietrobon… A rendition of where today’s political boundaries would fall if taken back in time 300 million years, when the world was really just one supercontinent.

Nova Scotia’s Offshore Energy Research Association has announced a memorandum of understanding to cooperate on research with its Moroccan counterpart, looking into “the petroleum resource potential of offshore Nova Scotia and Morocco, which were once direct neighbours, before the continents split apart around 200 million years ago.

The agreement was signed yesterday at the Conjugate Margins conference, a three-day long government and industry funded research conference with the goal of “improving knowledge and prospectivity of this under-explored global petroleum province,” according to the conference website.

8. Another day, another tower 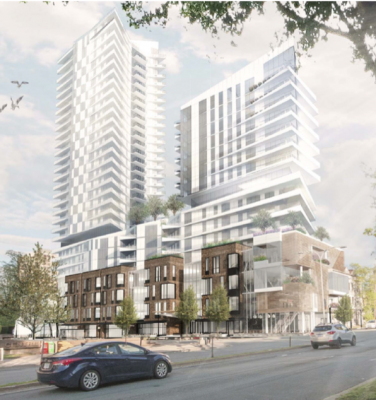 The Halifax peninsula planning advisory committee has recommended in favour of a proposal for a major development at Spring Garden and Robie Streets, reports Zane Woodford for StarMetro Halifax.

The approval came with a list of non-binding recommendations, including shortening the proposed 30-storey tower to meet Centre Plan limits of 20-storeys (that sounds familiar), and the inclusion of affordable housing. Woodford points out, yet again, that the city still has no actual way to get that affordable housing.

1. If Doug Ford doesn’t want to study basic incomes, I know someone who does

At the University of Calgary, Herb Emery and Lynn McIntyre studied the effect of a basic income guarantee on seniors’ food insecurity and health. Remarkably, they found that food insecurity rates drop by half at people’s 65th birthday as a result of seniors’ income supports.

The research team also compared seniors’ guaranteed income with conditional income assistance programs. They found that the income guarantee is beneficial to both physical and mental health, functioning in a way similar to wages…

The evidence to date is that a basic income guarantee can be an effective strategy to reduce food insecurity and improve health outcomes, saving public dollars. The evaluation of the Ontario pilot would have offered crucial evidence to help us further examine this promising strategy.

So, Ontario’s cancellation of the pilot, besides being a complete waste of money for Ontario, also affects the rest of us, because we need studies like this to test the potential for basic income programs.

If only Mah saw fit to take her piece one step further, and pitch Nova Scotia as the province to pick up the mantle of basic income research in Canada. And why not? Basic income programs are certainly innovative, and promise to be a more equitable, healthier, and more productive way to run a social safety net. And a pilot project in a Nova Scotia town would certainly seem to be in line with the “transformation” underway over at the Department of Community Services, who are promising “to transform and redesign our programs to ensure that they are as effective and efficient as they can be.”

Besides, if Doug Ford cancelled it, it’s gotta be worth doing, right?

The CBC has got hold of a video by a woman who spotted a great white shark in the water off Big Tusket Island, Nova Scotia. Be prepared for a quick glimpse of a great white, some excitable commentary by the woman (“see if I ever swim again”) and what is probably my favourite detail: the song they are playing on the boat in the background, Somebody’s Watching Me, by Rockwell circa 1984, and featuring back-up vocals by Michael and Germaine Jackson.

No government meetings this week.

Thesis defence, Sociology and Social Anthropology (Tuesday, 11am, Room 3107, Mona Campbell Building) — PhD candidate Diana Lewis will defend her thesis, “Tlilnuo’lti’k — Weji-sqalia’timk — How we will be Mi’kmaq on our Land: Working Together with Pictou Landing First Nation to Redefine a Healthy Community​​​.”

Thesis Defence, Biochemistry and Molecular Biology (Wednesday, 9:30am, Room C264, Collaborative Health Education Building) — Pooja Srinivasan will defend her thesis “A study on the importance of an intact-ring structure in proline racemase catalysis.”​

7:30am: Iver Prosperity, oil tanker, arrives at CB#2 from Boston

I wonder how long a walk it was to Casablanca, back in the Carboniferous.