You are here: Home / Featured / New information is revealed about the weapons used by the mass murderer, and it appears he was heading to the city to kill someone else

Today, Judge Laurie Halfpenny-MacQuarrie ordered the unsealing of more redactions in the search warrant documents related to the police investigation into the April 18/19 mass murders.

This article extends and builds upon previous reporting.

After GW was killed at the Big Stop in Enfield, police searched the vehicle he was driving (which he had stolen from Gina Goulet), and found the following weapons:

Rifle, Colt Law Enforcement carbine, semi-automatic weapon, 5.56 calibre — the selector switch was set to “FIRE.” There was no round in the chamber but a loaded over-capacity magazine was present in the magazine well. Three over-capacity magazines were in the car, each of which held 30 rounds. The gun was sourced to a gun shop in California, and so it was smuggled into Canada.

Rifle, Mini 14 by Ruger, semi-automatic, .223 calibre — there was an over-capacity magazine with 40 rounds in the magazine well. There was a round in the chamber. There were three magazines present, two with 40 rounds each. This gun was sourced to a gun shop in Winnipeg. It was unlawfully obtained because GW did not and never had a firearms licence.

Pistol, Glock 23, semi-automatic weapon, .40 calibre — there was a loaded, over-capacity magazine with one round in the chamber, and spent shell casings for this weapon were found in the car. The gun had a customized grip that emitted a laser-point sighting when pressed. This gun was sourced to a gun shop in Maine and would have been smuggled into Canada.

When police searched GW’s property on Portland Street in Dartmouth, they found a business card for Bob Berg, of Bob & Tom’s Gun Shop, in Mattawamkeag, Maine. The first result in Google search for the gun shop brings up an article about patrons opposing universal background checks for gun buyers, and the shop itself is described:

Two rolls of toilet paper — one bearing the face of President Barack Obama, the other of Democratic presidential nominee Hillary Clinton — hang from a shotgun that dangles from the ceiling.

Pistol, Ruger P89, semi-automatic, 9 mm calibre — there was an empty magazine in the firearm and the safety was off. There was one round in the chamber. The gun also had an after-market grip that emitted a laser-point sighting when squeezed. This gun was sourced to an unnamed (unnamed in the document) owner living in Maine, and so it too was illegally brought into Canada.

Pistol, Smith &Wesson, 9 mm calibre — this gun is RCMP issue and belonged to Cst. Heidi Stevenson. There was a round in the chamber and a magazine seated in the gun that held 13 rounds, two missing.

Ammunition — there were boxes of ammunition on the front seat of the car. The investigating officer formed the opinion that each of the over-capacity magazines was sourced outside Canada because none of the magazines contained a small hole required to remove the base plate so they couldn’t fire more than five rounds from a weapon.

This is relevant because the RCMP last week charged GW’s commonlaw spouse, her brother, and her brother-in-law with providing GW with ammunition — “between the 17th day of March and 18th day of April 2020, [the three] unlawfully, transferred ammunition, specifically, .223 caliber Remington cartridges and .40 caliber Smith and Wesson cartridges, contrary to Section 101 of the Criminal Code.”

Grenades: We can now confirm that police thought the gunman, who the Examiner calls GW, may have had grenades. That belief came from a carpenter and friend of GW who appears to have lived on or near GW’s property in Portapique.

The carpenter is the same man who, as we previously reported, told police that GW “builds fires and burns bodies, is a sexual predator, and supplies drugs in Portapique and Economy, Nova Scotia.”

In August, the RCMP issued a statement discounting the carpenter’s claims, but there’s good reason to hold that statement suspect.

In August, much of the carpenter’s statement to police remained redacted in the documents, but today we learned that before they interviewed him, the RCMP had cautioned the carpenter, telling him that he could be charged with accessory to murder. The carpenter talked anyway, saying that he no prior knowledge of GW’s rampage, and did not assist it in any way.

As for the grenades, the newly released information says that the carpenter told police that GW “had two crates with grenades that he got from the US” and the carpenter said he “saw grenades on the bench in the garage.”

We don’t know if the RCMP were able to verify that information or found any other evidence that GW had grenades.

A planned murder in “the city”?

We also learned today that on the night of April 18, GW told his commonlaw spouse that he was “going to the city to get [redacted].” The very next paragraph reads that “Members of the Halifax Regional Police attended the residence of [redacted] and located her and [redacted] and provided them security as [GW] had not been located.”

This seems to suggest that after speaking with GW’s commonlaw spouse in the early morning of April 19, police feared for the safety of a couple living in the Halifax area.

GW was clearly heading towards the city on April 19, but never made it that far as he was killed at the Enfield Big Stop.

A chilling encounter with the killer

Also in today’s release is new information about the couple on Highway 4 who were visited by GW on the morning of April 19.

The Examiner has confirmed the couple’s identity, but will not release it at this point. They declined to speak to us, hanging up on a call requesting comment.

The wife spoke with police, and said she had met GW eight years ago in Portapique. Her husband was with her when they met.

The wife said that on the night of April 18, her mother called her to say there was something going on in Portapique, and she (the wife) should keep her doors locked. The wife said that she got up the next morning and saw on social media that Greg and Jamie Blair had been killed. Elsewhere in the search warrant, a cop notes that GW “had recently had a falling out with them [the Blairs].”

The wife kept checking Facebook and began learning the extent of what had happened in Portapique the previous night, and she said “jeeze hope it wasn’t Gabriel that lost it.” Her husband told her that Wortman had a police car “he was going to decal up.” Both commented that “it would be a disaster if he was in a police car.”

One of the couple called 911. The other again checked Facebook and saw that GW was wanted. It’s unclear from the search warrant document what time this was. The couple then went upstairs in their house, and about 10 or 15 minutes later a marked police car entered their driveway, drove past their cars, and onto the grass to turn around. One of the couple recognized the driver as GW.

They called 911 again. The Examiner is informed that the couple hid under their bed.

There’s still much in the document that is redacted, so it’s unclear exactly what happened next, but the narrative continues such that someone (it’s not clear if this is the husband and wife or someone else) could hear a helicopter “and was texting people [redacted] as the shooter was there.”

[Perhaps it was GW himself yelling “come out with your hands up, Gabriel” as a ruse to lull the couple into presenting themselves to him.]

The next document is heavily redacted, but the Examiner has been told that a neighbour inadvertently came upon the scene and GW fled.

The wife told police that next, “someone” called her and told her that GW was heading to Lower Onslow and she should stay in her house.

Again, the document is heavily redacted, but it’s clear that after this, GW returned to the property, and walked around with a rifle, before getting back into the look-alike cruiser and leaving. 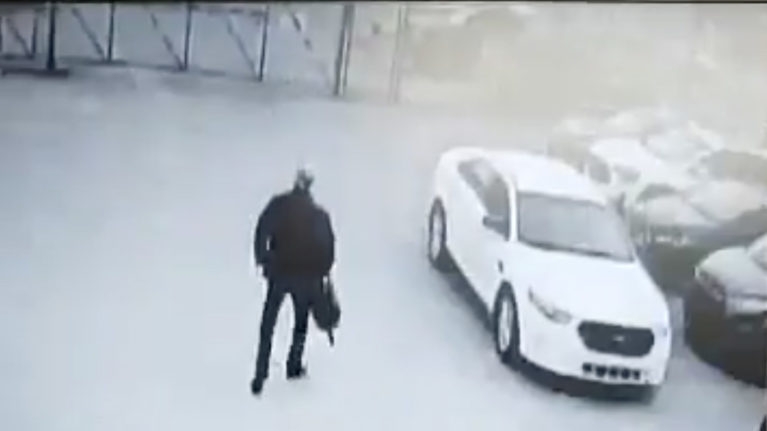 Another friend of GW (not the carpenter friend mentioned above) told police on April 19 that Wortman had recently taken $750,000 out of his bank and had buried “some of it” on the property in Portapique.

With files from Jennifer Henderson.